We’ve been in Ohio for nearly five months, and we’re finally getting ready to head South for warmer territory.  We’ve been staying at Wright-Patterson AFB, where 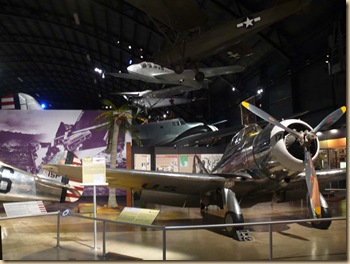 we started our full timing experience almost five years ago, visiting old friends and revisiting some of the places we enjoyed when we lived here.  One such place, not to be missed if you’re visiting the area, is the National Museum of the United States Air Force, a sprawling, exhibit-packed facility that’s one of the best bargains around – it’s free!  The main museum is located on the edge of the base and is open to the public, and while there you can sign up for a bus trip on base to visit the Presidential and Research hangers. 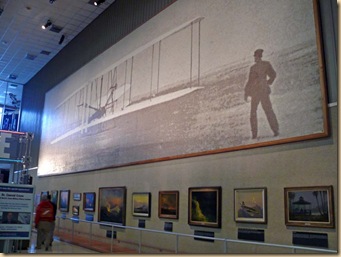 Having visited before, we limited our visit to the areas we’ve enjoyed in the past, because if you visit every exhibit and read every storyboard, you’ll be here for more than a day.  Our first stop was to view the “First Flight” Mural.  At first glance, it looks like a large painting, but when you look close, you’ll see that it’s made up of small ceramic pictures of different views of the Wright Flyer – 163,000 of them! Our next stop was at the “Fifty Years of Hope”, the Bob Hope exhibit.   For all of us military veterans, Bob Hope was a special kind of hero, and the exhibit does a great job of depicting his long history of entertaining the troops from WWII to Desert Storm. 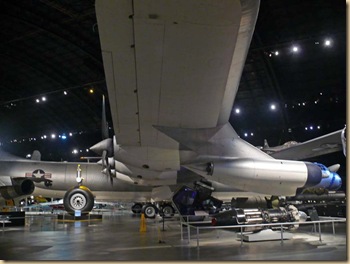 But the museum is really about airplanes – lots and lots of airplanes. And not just Air Force, there are Army, Navy, and even Russian aircraft on display.  We're always struck by the huge cold war bombers.  The B-36 pictured here is amazing; it’s huge wingspan and six radial and four jet engines dwarf the aircraft around it – what a great RV it would make!  Look close at the picture and you’ll see one of the original wheels that were changed in favor of a number of smaller ones.  Six of those would look really great on our coach…. 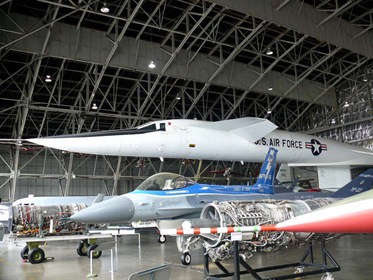 One area that we hadn’t seen was the relatively new Presidential and Research & Development hangers. 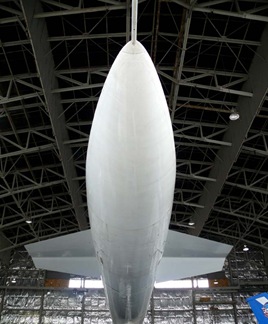 We especially wanted to visit this area since it’s now the location of the XB-70, the amazingly beautiful and HUGE aircraft that incorporated then-unheard of technology to attain speeds in excess of three times the speed of sound (Mach 3).   And   remember this was 46 years ago!  Only two XB-70s were built, and the other aircraft was lost in a midair collision while testing.  You can read about it and see the amazing pictures here.  Unfortunately, it’s too large, and the hanger was too small, to adequately show more than about 1/3 of this beautiful aircraft. 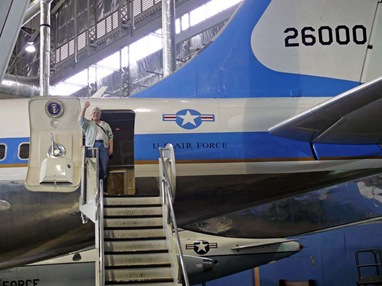 Next door was the Presidential Aircraft hanger, with aircraft ranging from the first, the C-54 “Sacred Cow” to the VC-137, with the famous tail number of AF 26000, used by Presidents from Kennedy to Clinton.  All of the aircraft are open to view, although the Plexiglas walls make it a little tight to maneuver through the cabin areas.   I couldn’t resist taking a picture of my personal “First Lady” as she exited the aircraft – kinda neat, being able to stand in the same spot as JFK, Reagan, and others. 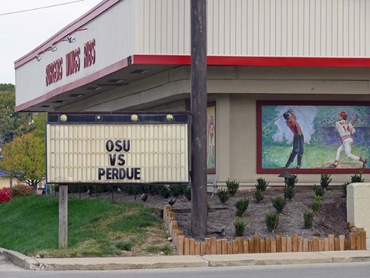 We came across this sign while driving around; after all, this is Ohio State University  football country.  I’ve always considered OSU’s math education suspect (question – how many schools in the Big 10?   answer  - 11!)  Now I have to wonder  - was the sign made by an OSU graduate?  And what would this say about OSU’s  English program?    Or maybe OSU is playing the Perdue Chicken employees?

Finally, after five years and almost 200 campground stops, we’ve added a link to our new campground review site, where we rate parks as good, bad, or really ugly.  We’ll continue to add to it as we continue our explorations.  We’re planning on stopping at some interesting places on our trip back to Texas, so Y’all come back!
Posted by DNPC at 12:42 PM No comments:

A Sad Time for the RV Community

We in the full time community are a unique group.  Besides our lifestyle of abandoning the traditional stick and brick house, loading all of our possessions into a wheeled vehicle, and hitting the road, our “community” is made up of friends everywhere across the country, held together by our Blogs.  Find any full-timers blog, look for the “Followers” list, and click on any one of the icons.  You’ll almost always be taken to another full-timer’s blog,

with another list of followers, and if you keep at it, you’ll discover how large our community really is.  On Saturday, our community suffered a tragic and unexpected loss.  Bruce and Margie Mallin, of “Bruce and Margie’s Full Time Journey” were taking a morning walk when a despondent young man, bent on committing suicide by crashing his car into his ex-girlfriends restaurant, stuck and killed them (news article).  Most of us in the

community are of the age when we think about our mortality each time we get another ache or pain, but none of us can conceive of our lives ending this way.  Horrible events like this aren't supposed to happen to people we know.  Like most of our community, we never met Bruce and Margie, but we knew them well through their blog.  Unlike ours, their blog was an almost daily account of their activities, thoughts, and family, and we grew to know them well.  Our thoughts go out to their family with a hope they’ll understand that there are so many of us who never met Bruce and Margie, but knew them and will miss them dearly.

I know there’s a “men are from Mars, women are from Venus” thing about communication between the sexes, but every so often an event happens to me that makes this concept crystal clear. 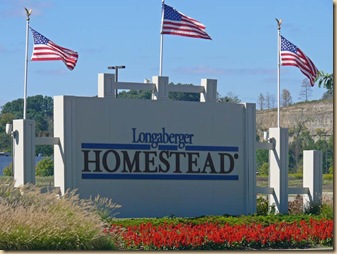 Such was a day recently when Brenda said “I’d really like to visit the Longaberger Basket place.  Hmmm, I thought….I’ve really enjoyed Whataburgers, Steakburgers, and even a Freddy’s Butterburger; although I’d never heard of a Longaburger, I do love those burger baskets with fries, and maybe some coleslaw.  So off we went.
OK, so now you’re thinking “what kind of idiot doesn’t know about Longaberger Baskets?”  Well, almost any man idiot, that’s who.  And I can prove it because as we strolled the grounds and 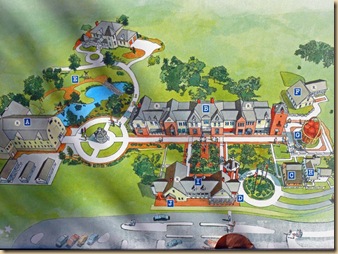 stores I was one of only three men in the midst of hundreds of women, all of us men having confused looks on our faces, being led around by our wives.
It’s an amazing place, the Longaberger Homestead.  Large tour busses were lined up disgorging their loads of blue-haired ladies by the hundreds, all with frenzied looks as they streamed to buy baskets and hand crafted nick-nacky stuff.  Brenda was in woman-shoppers heaven, while I was confused with what all this stuff did.  Why do you need a “cookie paddle”?  To spank them?   Do jars really need “bonnets”?  These and other mysteries befuddled me, although I did find one valuable product, a “woozie” (a coozie for a wine glass).   Things dealing with alcohol I generally understand. 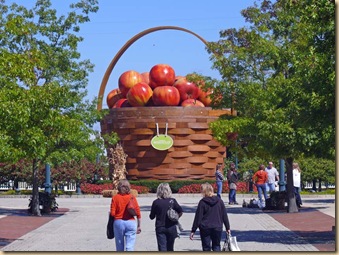 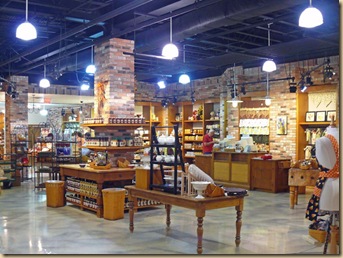 y went from befuddlement to shock when we entered the “factory store”.  Here in this huge warehouse were tables covered with baskets stretching endlessly in all directions.  I stopped at one table and picked up a small basket, no more than 6 inches square with a handle….and saw that the “sale” price was $124.00!  Egads!  It wasn’t even big enough for a decent burger, let alone fries!
Fortunately, Brenda sensed my confusion and led me to the “Homestead Kitchen”, where I recovered thanks to a two-scoop cup of raspberry-chocolate chip ice cream.  Even more fortunately, Brenda didn’t find anything she liked enough to buy.  Thank you, Brenda!
We’re enjoying visiting friends from our past working life in Dayton, but we’ll be out and about to look for new adventures – stay tuned!
Posted by DNPC at 6:31 PM 1 comment: