A Town that Looks Better in Twilight

What stay on the Olympic Peninsula wouldn’t be complete without a visit to Forks, the home of Bella, Edward, and the “Twilight” saga?  Although we’re a bit past the age of Twilight appeal, we decided to make the drive west from Sequim and take a look at the home of vampires and werewolves.  I have to say that I struggled over this blog’s title.  I considered “A Visit to the Twilight Zone”, but wrote it off as too obvious.  My favorite was a tribute to Yogi Berra; “When You Come to the Forks in the Road, Take It”, but Brenda thought it was a bit of a reach.  So we settled on the above title, since as you’ll see, the town of Forks looks a lot better either in (1); the movie, or (2); twilight, or even better, the dark of night.

We traveled west along Highway 101, the only major route in the northern part of the Olympic Peninsula.  Along the way, we stopped at Lake Crescent,  a large, deep (over 600 feet) lake, stretching almost 12 miles along the highway.  For some interesting photos of the history of the lake, click here. 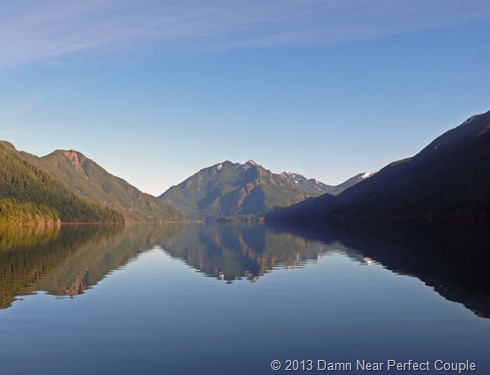 Back on the highway, it wasn’t too much longer before we came to the sign marking the entrance to Forks.  We were surprised to see only depictions of logging and fishing on the sign…what, no flying vampires?  Driving around Forks on this dreary February day, it’s hard to imagine what attracts thousands (yes, thousands!) of hormonally-imbalanced teenage girls to visit on summer weekends.  We were told by a store clerk that it can take 45 minutes to an hour just to drive down main street during a busy weekend.   Maps and signs point out each and every place depicted in the movies, and there are “Twilight” guided tours and “Bella Burgers” on the menu at Sully’s Drive-in (comes with pineapple and a set of fangs.  No, I’m not making this up).  But the town, even with the “Twilight” trappings, is a depressed, struggling place, with not much other than the motels (my favorite sign – “Visitors Welcome!”), mediocre-looking restaurants, and deteriorating houses.   But we just had to see what Bella saw (click to expand): 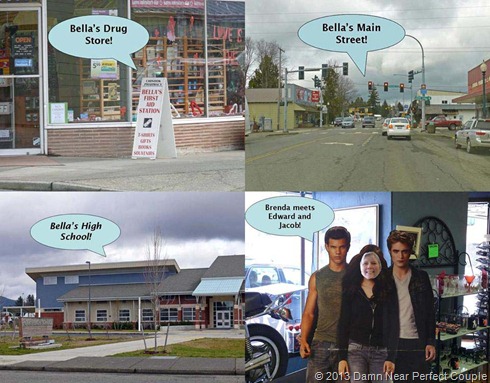 Although we’d traveled through Forks before, we’d never been to La Push, a small community located where the Quileute River enters the Pacific.  Driving west from Forks, it wasn’t long until we realized we were leaving the land of the vampires and entering the land of the werewolves.  We knew this because the signs said so: 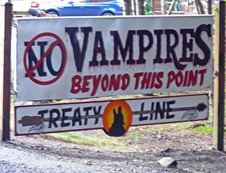 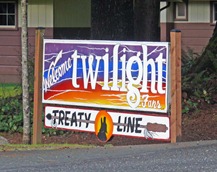 Approaching La Push, we could hear the surf pounding and we could smell the salt water.  Rounding a curve, we were surprised by the huge, tree-covered offshore rocks.  The wind was howling, the waves were crashing, the gulls were screeching…..it was beautiful! 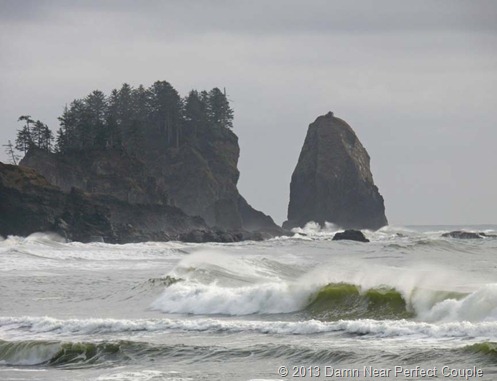 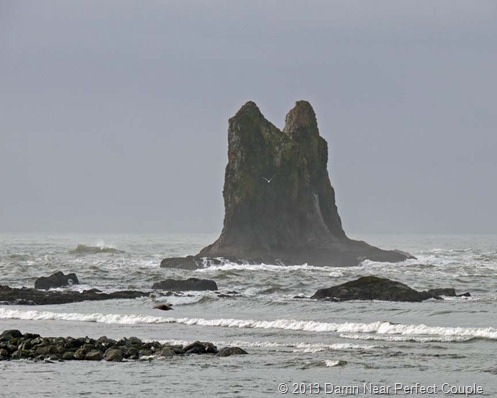 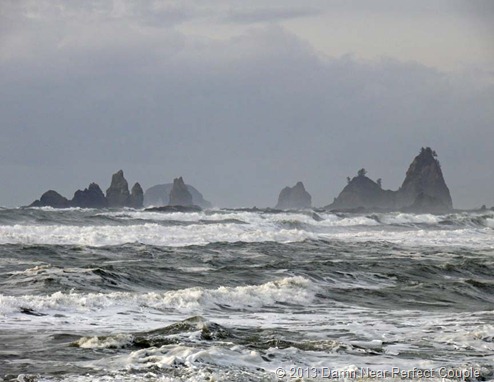 Inside the harbor and alongside the river, it was a bit more quiet.  The view looking out along the river was more peaceful but just as intriguing, and across the river we watched a Bald Eagle as he sat waiting for a meal. 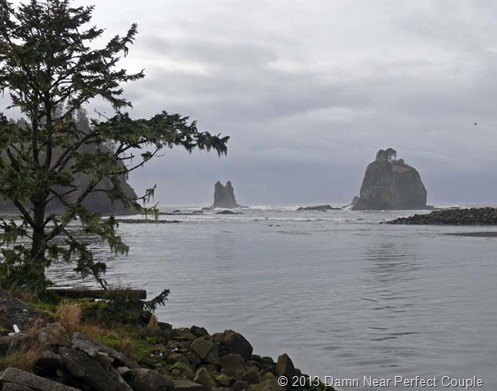 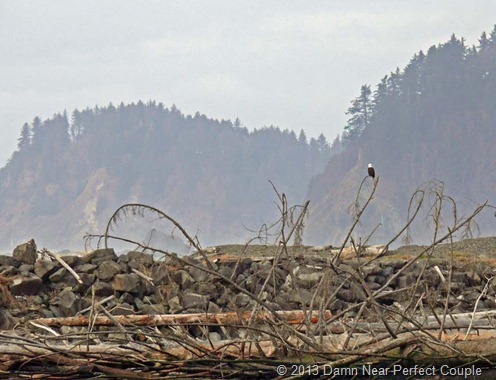 Walking along the beach which was crowded with huge, storm tossed trees and the stark branches of trees killed by the salt water, it was easy to understand why the author of the Twilight series picked this area for her novels. 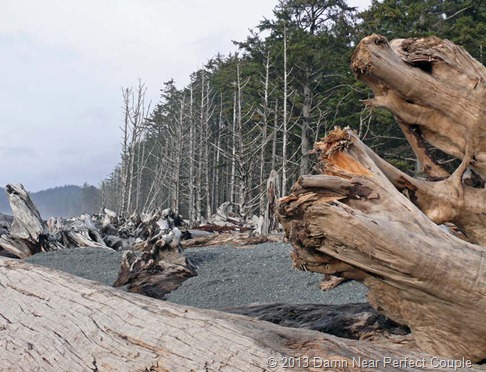 That’s it for this trip – stay tuned, we’ve got more explorations planned!