It’s finally warming up in the Black Hills; the snow is gone, the streams are running clear, and the green of the foliage is bright enough to hurt your 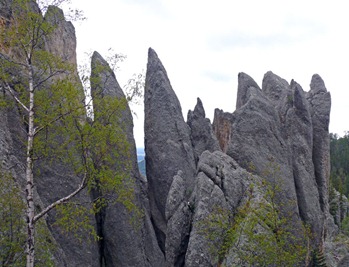 eyes.  It was time for a road trip before the crowds hit, and we headed for Hill City and the Needles Highway, a twisting road through carved rock tunnels, dense forest, and with some of most beautiful vistas in the Black Hills.  It’s an area of towering granite spires, unlike any other place in the area.  We made a quick stop at Sylvan 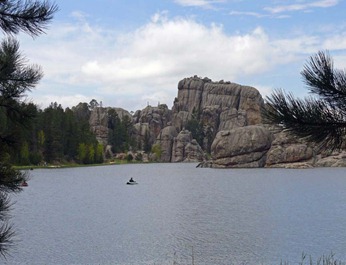 Lake, one of those beautiful places that looks like a painting.  The lake has a nice lodge, boat rentals, and is stocked with trout; just one of the many places in Custer State Park with these type of activities.  Continuing down the road we came to the first tunnel, or more correctly, the first hole carved 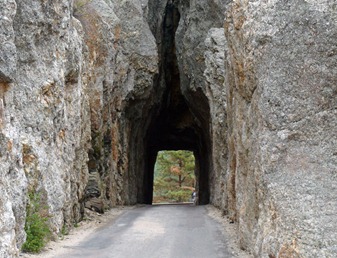 through the rock.  Prior to the tunnel, there are interesting rock formations, viewpoints, and very limited parking.  It was a mess when we were there on a quiet day, and we can’t imagine what it would be like during the busy season. 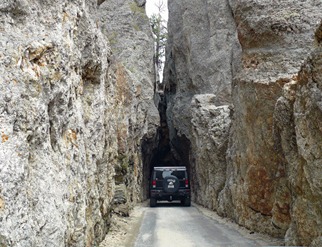 One of the problems is that the tunnel, which is limited to one way traffic, has traffic coming from both directions, and it’s difficult to see if anyone is waiting on the other end.  We watched this Hummer slowly work his way through, just barely clearing his mirrors on each side.  It made us wonder how many large RVs ignore the signs and end up stuck here with almost no space to turn around.  Bet it only happens on the busiest days!
The views as we traveled the highway were stunning: 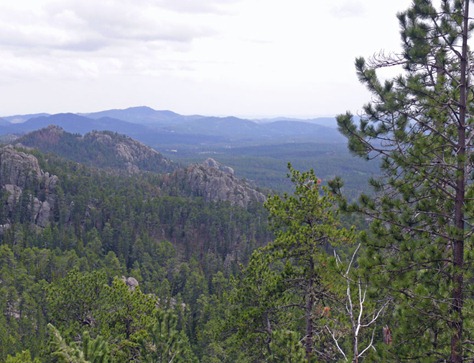 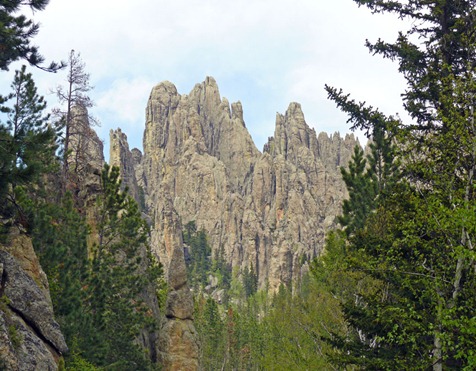 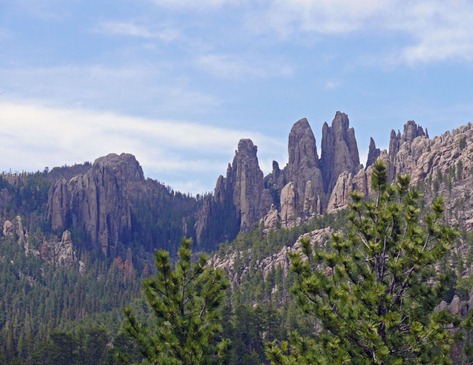 At the end of the Needles Highway, we entered the “wildlife loop” section, an area where the majority of the Bison are located.  It’s spring, and calves were everywhere – running, jumping, and generally driving their mothers crazy.  There were a few half-hearted battles between the bulls, but in general everyone was hanging out in the grass enjoying the day. 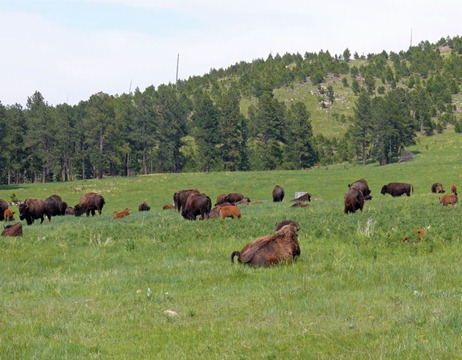 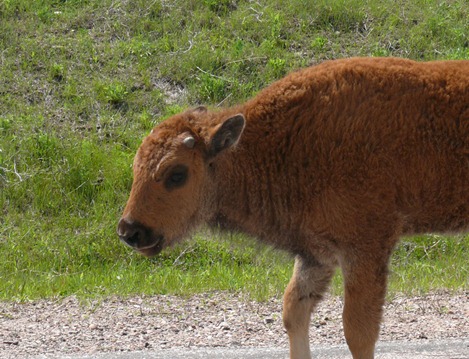 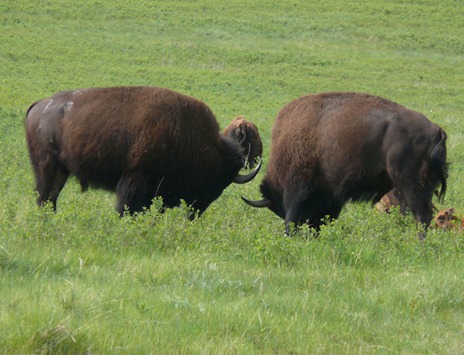 Driving along a more remote stretch of road, my eye caught something up against the trees in the distance.  We stopped to get a better look with binoculars, and were surprised to see this mother Pronghorn with twin fawns enjoying a day in the sunshine. 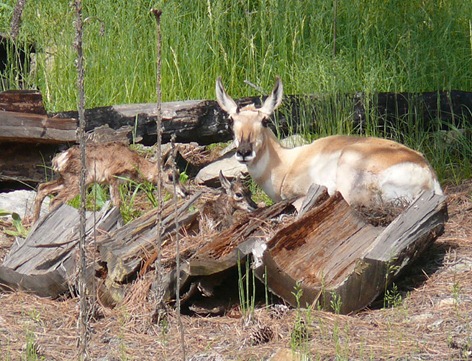 What an amazing place, the Black Hills!  We’ll be back soon with more stories of our travels, C’mon back!
Posted by DNPC at 10:56 AM

Close Encounters of the Fun Kind 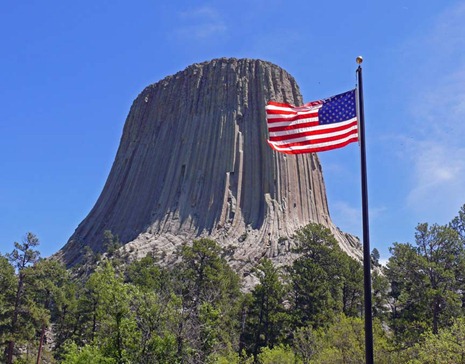 With a day off from our volunteer duties and bright sunshine for a change, we headed off for a road trip to Devils Tower National Monument in nearby Wyoming.  When mentioning Devils Tower to some of our friends, they weren’t always sure what it was…..but mention the movie “Close Encounters of the Third Kind”, and they remember that it’s the big rock where the music-playing aliens landed and took Richard Dreyfuss away with them.  In reality, there was no filming done at Devils Tower; the alien landing scenes were done in a large hanger in Alabama.  But a visit to the “tower” is a memorable 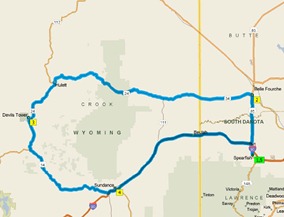 experience, and getting to and from the monument is a worthwhile trip in itself.  We began by heading north to Belle Fourche, then headed west into Wyoming, passing the bustling towns of Aladdin (pop. 15), and Hullett (pop. 45), all the while driving through incredibly green hills, meadows, and pine forests.
Approaching the tower is almost surreal – suddenly in the distance this strange monolith rises out of the ground, looking completely out of place.  After passing the entry station, it’s a winding, three-mile road up to the base of the tower, where we stopped at the visitor center before heading out on the 1.3 mile loop around the base of the tower.  It’s a fairly easy trail, nicely paved, and with plenty of benches for sitting and staring at the strange columns of rocks.  Once again, those fun-loving park service folks made sure that all of the uphill grades are in the bright sunshine, while the downhill grades are in the shade.  It was in the mid-80s and sunny, so those uphill stretches seemed longer than they probably were. 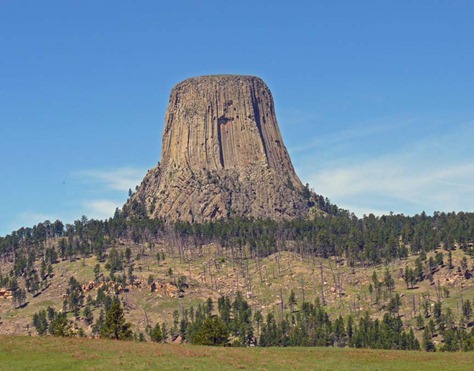 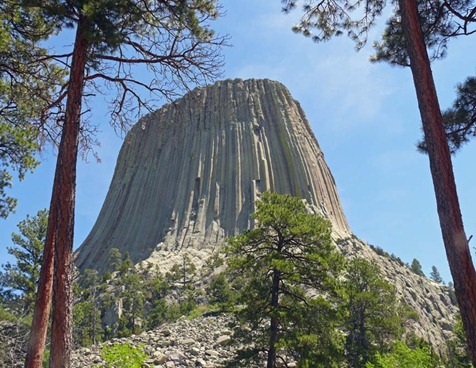 As we walked around the tower, each opening in the trees gave us a different view of the strange, columnar rocks.  There are a number of Indian legends about how the tower was formed, but all have a central theme of a giant bear trying to claw his way up to the top where children were hiding, and so the columns were formed by the giant bear’s claws.  The real reason isn’t nearly as enchanting, you can read about it here.
Wherever there are tall rocks, there seems to be a group of people, who for a reason unfathomable to us, want to climb them.  We watched as a group was attempting to scale the tower.  I say attempting, because there seemed to be a problem with one of the climbers who was getting help from another.  You can just see them in the next picture, then see them up close in the following picture. 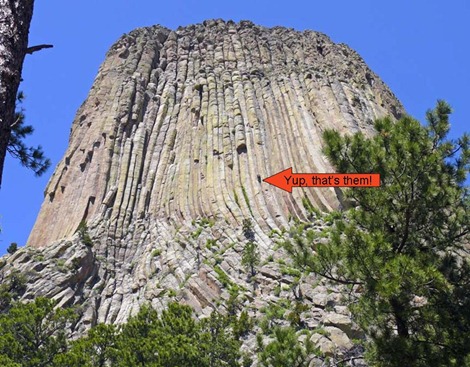 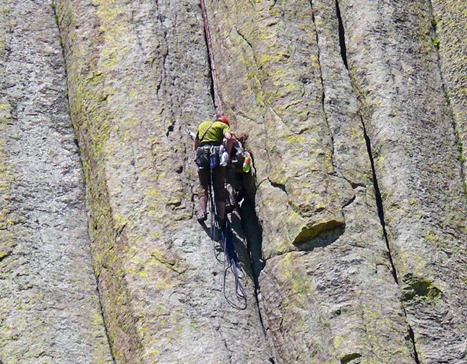 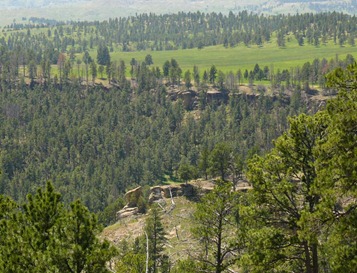 As we trudged along the trail, the trees would open up and we’d be treated to a view of the surrounding Bear Lodge Mountains.  This is probably the prettiest time of the year as everything is green from the spring rains. 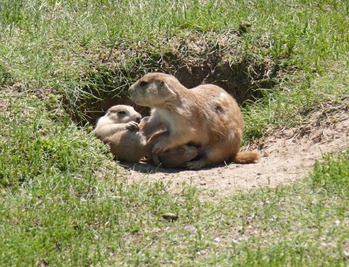 Leaving the visitor center, we stopped at “Prairie Dog Town”, and pulled over to watch the show.  Since it’s Spring, the “town” was filled with mothers and their young, and it was fun to watch them as 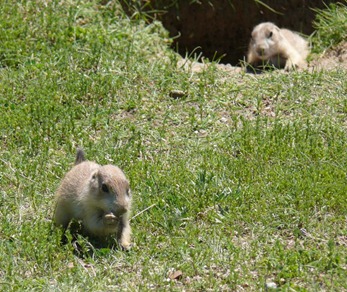 they scampered around, playing and tormenting their mother.
Back on the road, we turned south to Sundance, where we turned onto Interstate 90 for our return trip.  This was a great road trip that we’re sure we’ll remember for a long time!
Things are heating up here in the Black Hills - we’ve got more adventures planned, so stop back and visit!
Posted by DNPC at 6:57 PM

We’ve been here a few weeks now, and have had the chance (when it wasn’t raining) to do some exploring.  We took a ride North to the town of Belle Fourche (bell-foosh), a pretty little town just east of the Wyoming border. 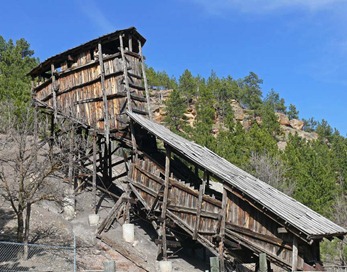 We headed west from town, and in a while came across the historic Aladdin Tipple, an underground coal mine that began operations in the late 1880s to provide coal for the gold smelters in the Deadwood area.  The mine had it’s own rail 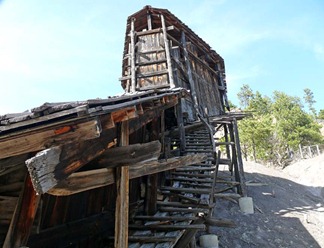 line, which ran to the main tracks at Belle Fourche, and was operational until the 1940s.  The “tipple” was used to sort coal – the coal was loaded into the bin on top, and as gravity forced it down the chute, the different sizes of coal would fall through grates and be sorted, then held in bins until loaded into rail cars.   It was an ingenious system and viewing the “tipple” gives you a clear picture of how it worked.  A few miles further down the road brought us to the town of Aladdin (population 15), where we stopped at the famous Aladdin General Store, a place of antiques, biker clothing, and a couple of friendly ladies behind the counter.  We continued on to Sundance, a picturesque town at the foot of the Bearlodge Mountains.  We visited the local museum, one of the best we’ve seen in a small town, with interesting information on the area’s history, the Custer expedition of 1874, and of course, the Sundance Kid. 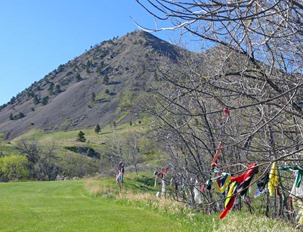 We also took a drive through Sturgis, (which is not particularly picturesque or interesting), and visited Bear Butte State Park, an area considered sacred to Native Americans.  Throughout the park, trees and bushes were adorned by “prayer cloths” to 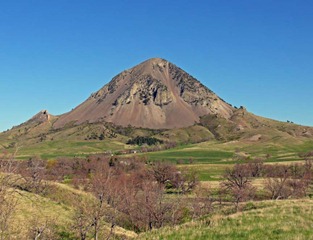 represent the prayers offered by individuals during their worship.  Bear Butte is spectacular, rising over 1200’ above the surrounding landscape, with a lake, campground, and hiking trails.  One trail, a little over a mile, even goes to the top, where we’re sure people with more hiking enthusiasm than we have will enjoy the view.
South Dakota has been the filming site of many western movies, and one of 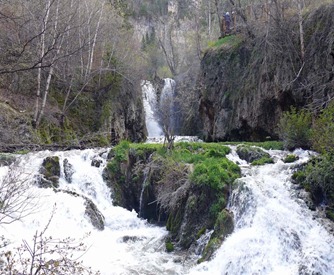 our favorites, Dances with Wolves, was filmed in the area.  We took a side road down Little Spearfish Canyon to Roughlock Falls, an area where the last scene of the movie was filmed.  This time of year the falls were roaring due to the still-melting snowpack, and there were just a few people watching instead of the summer crowds. 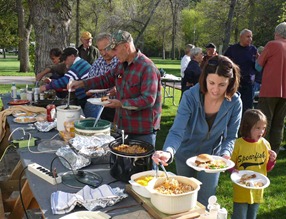 One of the reasons we enjoy volunteering is the friendships we make with our fellow volunteers.  Here at “Volunteer Village”, we’ve had a number of pot-luck get-togethers, and if there’s one thing we all have in common, it’s hearty appetites, followed by a glass of wine….or two.  We’re a group of people with wildly diverse backgrounds, but with a common interest in public service and learning new subjects.  And did I mention the food?
Things are warming up and the trees are filling out – it’s a beautiful time of year and we’re looking forward to our summer here; stop back and see where we’ve explored!
Posted by DNPC at 9:07 PM