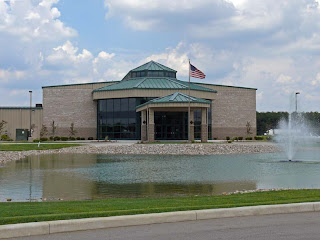 As we slowly travel westward, we've decided to spend a week visiting the recreational vehicle capital of the world, Elkhart, Indiana, along with South Bend and the surrounding region. It's a pretty area, with fields of corn and soybeans broken by hardwood forests and small lakes. We're staying in a very nice park in Niles, Michigan, just across the Indiana line, and along with exploring, we're catching up on fixing the 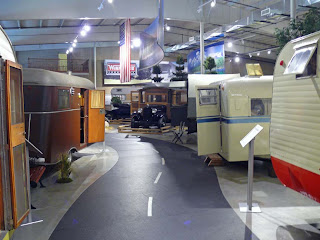 little things that crop up on a home that does 60 MPH over rough roads. Our first visit was to the Recreational Vehicle/Motor Home Hall of Fame Museum, housed in a beautiful new building right off the interstate highway and with big-rig parking if you're just passing through. Although we tend to think that the building of RVs started with the iconic Winnebago, we found that as soon as the automobile was built, people wanted travel trailers to pull behind them. Especially interesting was this 1913 travel trailer. 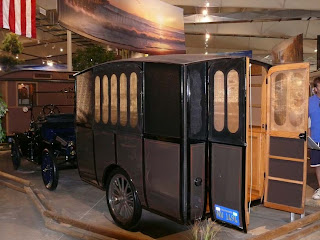 The workmanship was beautiful, and the interior, with it's hardwood floors and cabinets was stunning even after all these years. 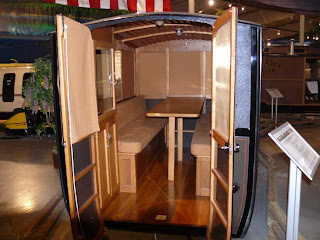 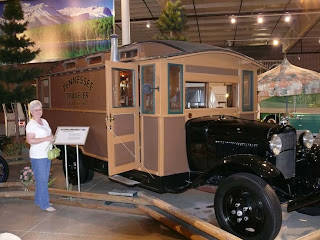 There were also a number of "house cars", the first motor homes, and this 1930's "Tennessee Traveler" even featured a 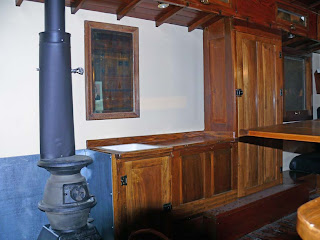 wood-burning stove in the kitchen! Our favorite was Mae West's 1931 house car that was built to entice her to move from New York to make movies on the west coast; you can see a picture of it here. 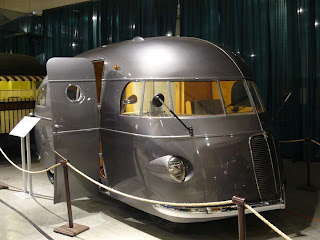 Some of the older models showed a glimpse of what was to come, like this "Silver Bullet". As you wander through the museum exhibits, the models get newer and more sophisticated, there's a 1976 Cadillac conversion, the revolutionary GMC Motorhome, and a 70s-era Winnebago Brave. If you're an RV owner or interested in RVs, this is a great place to visit and see how the industry has changed over the years.
When we were shopping for our first motorhome, we visited this area to tour the different manufacturer's plants to learn how they were made. One of our visits was to Wakarusa and the Monaco Plant. When we visited six years ago, the plant was a beehive of activity; nearly 1000 workers were producing Monaco and Holiday Rambler motorhomes and travel trailers. 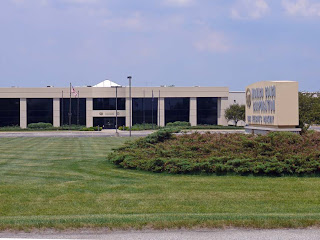 Today, Monaco has ceased operations and the plant is closed - weeds are growing up through the concrete where hundreds of RVs sat waiting for delivery, and as you drive around the area, you can see that supporting businesses that made mattresses, countertops, etc., for the plant have also closed or are only partially open. Reading that unemployment in the region is approaching 20% is a number that's hard to imagine; but seeing such a large manufacturing area closed up hits you with the realization of 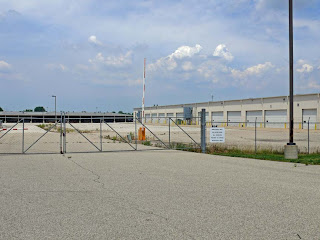 how tough times are for people here. Unfortunately, Monaco has filed Chapter 7 and is probably gone as a manufacturer, and while another company has bought some of the assets, it's doubtful that this area will ever see the plant reopen. It's a sad time for many of the area's residents and we hope they'll be able to recover.
We'll be here for a few more days and plan to do more exploring; come back and visit!
Posted by DNPC at 7:22 AM 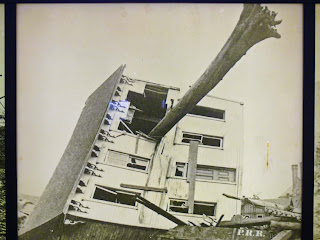 We've resumed traveling and headed East to Johnstown, PA to visit friends and reacquaint ourselves with Bruster's Ice Cream (new favorite flavor - "Jamaican Me Crazy" and Gobs, a desert cake-sorta-thingy. We lived in the Johnstown area for a little over three years until I transfered to the Dayton, Ohio area, and made some good friends who we've kept in touch with over the years. Fittingly, it was dreary and drizzly day when we decided to revisit the sites involved in the great Johnstown flood of 1889, when over 2200 people lost their lives. Our first stop was the National Park Service monument at site of what was South Fork Lake, about 14 miles 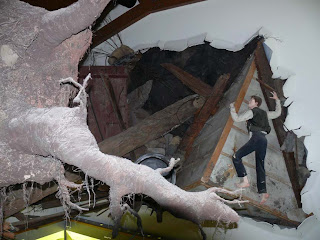 upstream from the town. There's a great visitor center with an award-winning movie, exhibits, and many pictures of what the lake looked like before the flood. It's interesting to stand in front of a photo of the lake taken in 1889 before the flood, and then look out the window at the lake as it is today, tree-covered with a 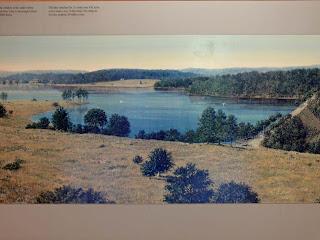 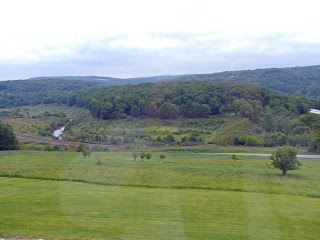 ailroad track running through the middle of the cut in the dam. In 1889, this lake was the resort property of Pittsburgh's elite; Andrew Carnegie, Andrew Mellon, and others spent time here. The dam, originally built by the state to provide water for a canal system, was built above the deepest river gorge in the country East of the rocky Mountains. The disaster was set up by the decision to lower the damn to make it wide enough for carriages to pass over. 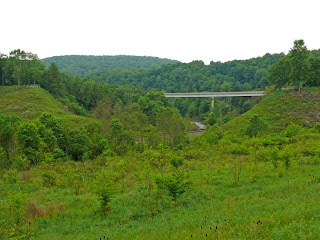 In late May unusually heavy rains saturated the ground, and on May 30 an estimated 6 to 10 inches of rain fell, raising creeks and rivers to unprecidented levels. At 3:10 in the afternoon, the dam broke and the lake quickly emptied into the gorge and began roaring toward Johnstown. The story of the wall of water and it's destruction as it roared toward Johnstown is amazing; you can read more about the flood here. When it reached Johnstown, the wall was 60 feet high and traveling at 40 MPH. If that wasn't bad enough, it had roared through a barbed wire factory and picked up tons of wire on its way. If a wall of water filled with barbed wire wasn't bad enough, it had also picked up a few train locomotives for good measure. 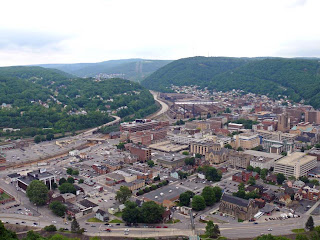 You can see the river entering the town at the top of the picture; the water spread as it entered the city, then smashed into the mountain directly under where I took the picture, then swirled around and tried to resume its path down the river to the left. Unfortunately, a stone railroad bridge (still standing) blocked its path, and over 30 acres of debris, including people, became trapped against the bridge. Then it caught on fire and burned for three days. Pictures of the aftermath of the flood portray the devastation, but a visit to Grandview Cemetery, where most of the victims are buried, brings home the heartbreak. 99 families were 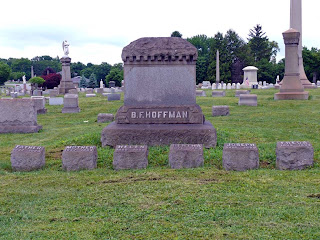 completely wiped out; driving through the cemetery, it's not unusual to see a group of 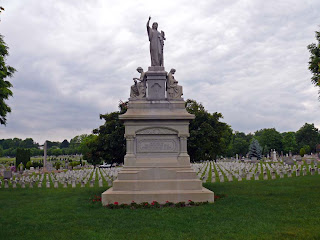 gravestones, all with the same date of death, May 31, 1889. One section of the cemetery is particularly sad - the unmarked gravestones of 777 victims who were never identified.
Johnstown has a history of bad luck; more floods, the most recent in 1977, and the demise of the mining and steel industry have left this town which had a population of over 75,000 in the early 1900s has a population today of slightly over 20,000 and it continues to dwindle. In 2003, US Census data indicated that Johnstown was the least likely city in the US to attract newcomers. After visiting again, we can see why.
Hey, come back, next time we'll have a happier story!
Posted by DNPC at 12:40 PM