Heading West to the Oregon Coast

We had such a great time visiting old friends celebrating Brenda’s birthday in Montana; in many ways our visits there are like a homecoming. But it was time to leisurely head west to the Oregon coast and our summer volunteer job. 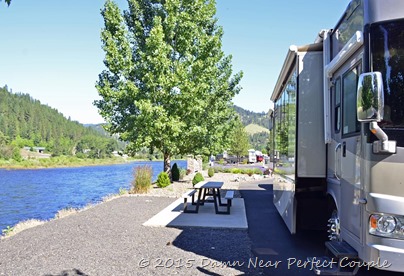 We drove over Lolo pass and followed the Lochsa River into Idaho and the Clearwater River Basin. This is a lightly-populated area with an interesting mix of river valleys below and relatively flat grassy fields above. 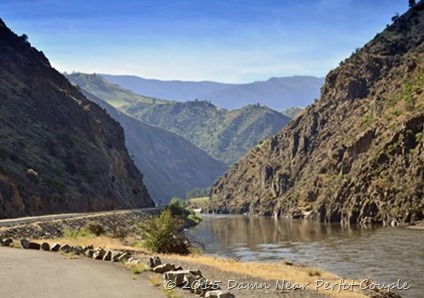 We spent a night in Orofino at the Clearwater Crossing RV Park, with a site right on the river. From here we traveled south along the Salmon River until finally turning west near Payette, Idaho and entering Oregon. We’ve always been interested in visiting Malheur National Wildlife Refuge with it’s over 180,000 acres of wildlife habitat and decided to spent three nights at the Narrows RV Park.  The Eastern Oregon landscape is entirely different from the green, mountainous west side. Here, the desert landscape is broken by rocky mesas, canyons, and at Malheur NWR, a green ribbon on either side of the Malheur River. 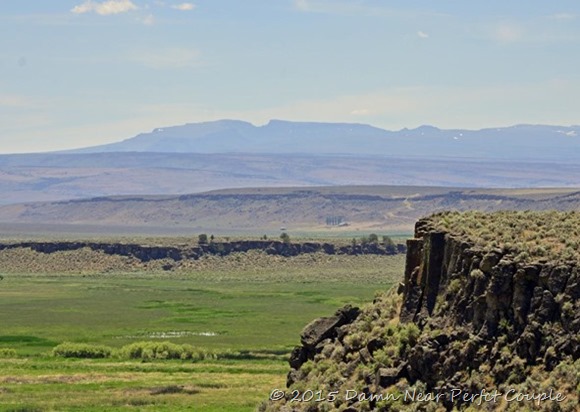 In many areas the river widens into wetlands, providing a habitat that makes it one of the country’s premier birding locations: 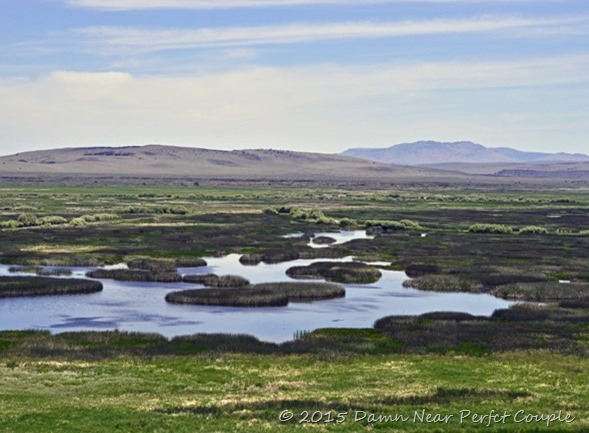 This area makes the Clearwater Basin look like a metropolitan area. Here you can drive for miles……and miles……and never see a house, ranch, or even another car. But one thing it has plenty of – mosquitoes. We found it impossible to be outside of the car or a building for more than a few minutes without being swarmed, and they seemed to enjoy eating mosquito repellant. No wonder this area has swallows flying everywhere – six different types inhabit this area. As many mosquitoes as they have to feed on, we were surprised that they weren’t the size of Turkey Vultures.

No trip to the area is complete without a visit to the “Round Barn”, built by rancher Peter French in the early 1800s. Although it’s called a barn, it’s essentially an enclosed corral, constructed so that horses could be trained and exercised during the harsh winters. That it is still standing after all the years of desert heat and wind and winter snows is a tribute to the construction. You can read more about it here. 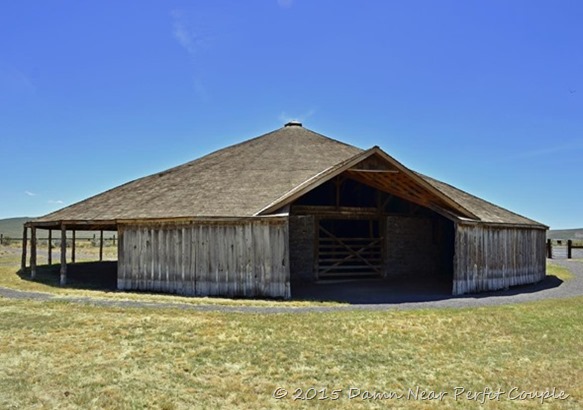 Driven from Malheur by the mosquitoes, we decided to visit Steens Mountain, which in the distance didn’t look all that impressive, but did have some patches of snow visible. So off we went, stopping at the Frenchglen Hotel for lunch. The hotel and town have an interesting history. The town (population 12) has a school that teaches children from kindergarten to 8th grade, divided into two classes for a total enrollment of eight.  High school students are bussed to Burns, a little over  60 miles away. Here’s an interesting article about the town: Frenchglen – A Long Way From Loneliness.

As we approached Steens Mountain, we realized that what looked like a large hill was a pretty significant hunk of rock. As we climbed towards the summit on a well-maintained gravel road, we began to enter areas of meadows surrounded by Aspen trees. Reaching the Kiger Gorge viewpoint, we were surprised by the stunning view. Although we didn’t realize it at the time, we were on Oregon’s highest road, topping out at just under 10,000 feet! 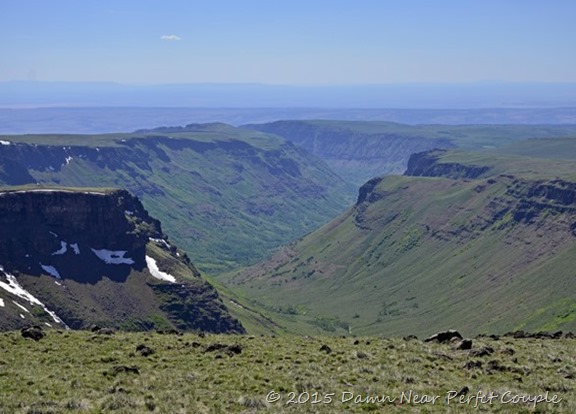 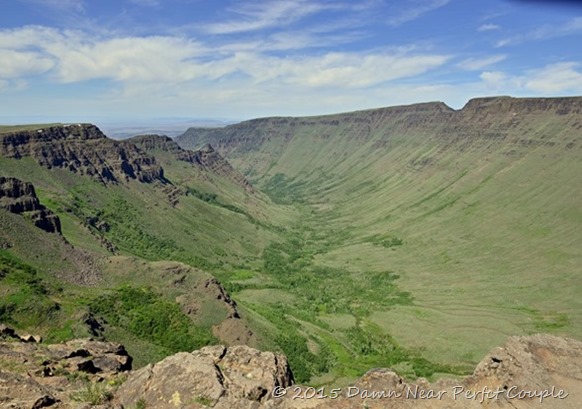 Further up the road, we came to the East Rim overlook where we had a spectacular view of Eastern Oregon and Northern Nevada. 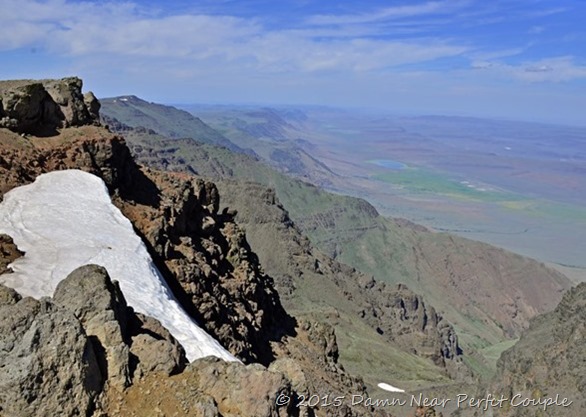 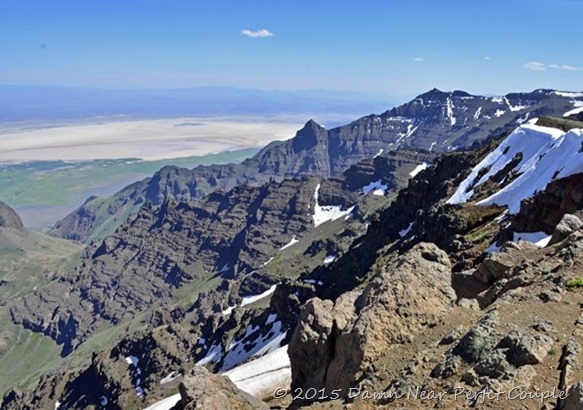 We like to think of ourselves as fairly knowledgeable travelers, but we both were surprised at the beauty of this remote location. But we think one visit to this area will be enough. 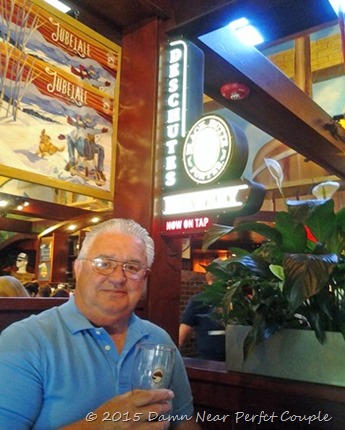 We continued west to Bend, where we spent a day exploring the town and the Deshutes Brewery and Public House. Bend’s downtown is a constant party, and there must be a brewery on every block, but yikes – the traffic is like being in downtown Tokyo during the evening rush. But the surrounding mountains make this a beautiful area, and we’ll probably return to stay a while longer.

We descended into the Willamette Valley for a short stay in Silverton, another great little town with a vibrant downtown. We visited Silver Falls State Park, another wonderful Oregon park with heavy forest, rolling terrain, and a number of impressive waterfalls. The one pictured below doesn’t look all that impressive until you realize that those little dots below the falls are people. 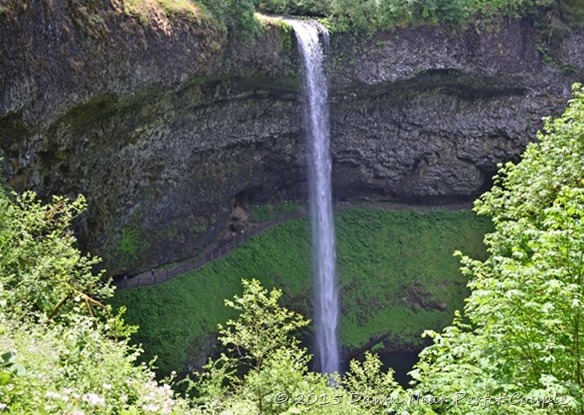 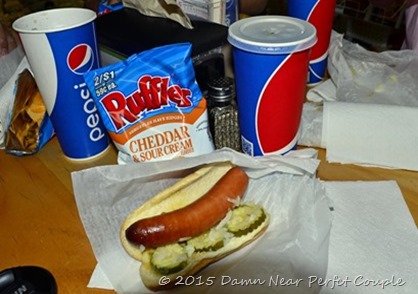 Finally we hit the coast and highway 101. We spent a few days at Humbug Mountain State Park, where we’ve spent two summers as the “Junior Ranger” hosts. Our friends Rob and Syd were hosting and we had the chance to spend time with them and our ranger friend Greg. 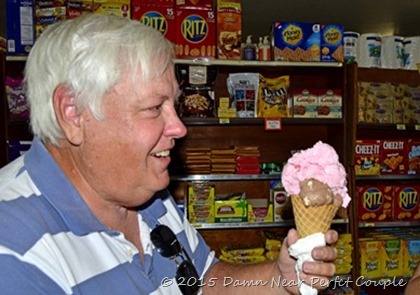 We couldn’t visit the area without a trip to the little town of Langlois and it’s famous market. When we were hosting, we’d drive the 20 miles just for their lunch special – one of their famous hot dogs with their special sweet mustard, dill pickle chips, and chopped onion, along with a bag of chips and a fountain drink, all for $3.99. The market and their hot dogs are a local institution, and they proudly proclaim on a sign “Over 750,000 Sold”. Of course, nothing tops off a healthy hot dog lunch like a serving of Umqua Ice Cream, and the market is more than generous with it’s scoops, as Rob found out.

We’re at our summer volunteer job at Yaquina Head Outstanding Natural Area in Newport - we’ll be back with what we’re doing, so stick around!