I’m not the type who can blog daily….or even weekly, although I try to update our travels at least monthly.  I’ve even failed at  that, and so here’s what we’ve been doing since our last visit:
On October 1st, we left Humbug Mountain State Park and drove north 40 miles to Bullards (no, there isn’t an apostrophe) Beach State Park for a month’s stay.  We weren’t ready to leave the coast yet, and Julie, the Interpretive Ranger there said she could keep us busy giving a few lighthouse tours until it closed on Columbus Day, along with doing “site maintenance” (more later).  We were glad to oblige, since we’d stayed at Bullards before and enjoyed it, and the neat little town of Bandon is just down the road and a favorite of ours.  Bullards Beach was a big change from sleepy Humbug Mountain.  Here, three loops held over 100, mostly full-hookup sites, and almost all were filled with fisherman since the salmon run was ongoing.  We had a nice site (see our volunteer section), with lots of room and privacy and since we were across from the dumpster, had the opportunity to see everyone in the 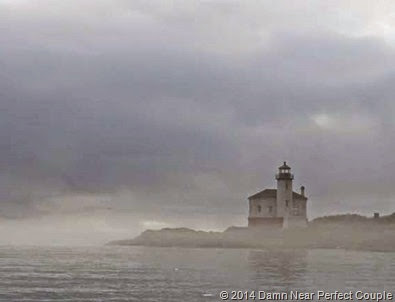 park at one time or another.  We started off by working two days of three hour shifts in the lighthouse, a picturesque and popular stop for people visiting the nearby beach.  There’s not a lot of history to this lighthouse compared to others along the coast, but it was fun to learn something new.  Brenda would stay 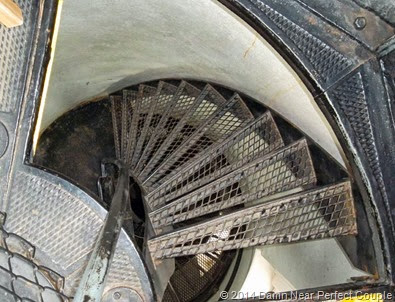 below in the gift shop while I’d climb the 28 steps to the small light room, where I’d wait for a radio call from her to tell me how many people were waiting for a tour.  There wasn’t much to show visitors, just a view through the now-Plexiglas windows overlooking the Coquille River and the surrounding beaches.   Our lighthouse duties were cut short when a Pacific storm with 20+ foot waves washed debris up onto the parking lot and resulted in the park manager closing the lighthouse for the season.   Although we’d never tried “site maintenance” we found out that it was enjoyable and easy to do.  Each morning we’d get our list of campsites, usually between 10 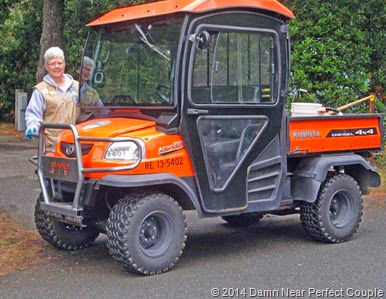 and 15, and off we’d go in a cart loaded with leaf blower, rakes, and trash pickers.  At each site, I’d blow the pad clean while Brenda would rake if needed and pick up any trash.  We were usually done in an hour or two unless we had to wait for people to leave, and were home for the day in time for lunch and a nap.  It was a welcome change from daily lesson preparation and working on craft kits, and we had the chance to get to know a new group of volunteers and park staff. 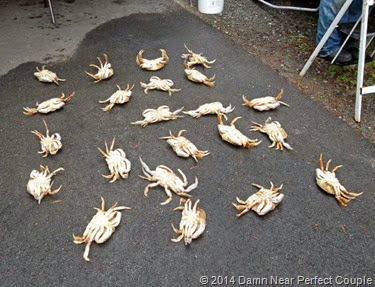 Doug and his wife Gloria, our neighbors for a while at Humbug Mountain, were also here.  Doug had a boat he used for crabbing (which is at its best this time of year), and on one day he and his visiting daughter hit the mother lode of crabs, laid out on his site before cleaning and freezing.  They may look quiet and docile, but as “Bloody Fingers Doug” discovered,  don’t be deceived - they’re just waiting for the chance to go out in a blaze of crab glory.
At the end of the month, we packed up, said goodbye, and headed over the mountains to the Southern Willamette Valley.  After having some annual motor home maintenance done (I highly recommend Southern Oregon Diesel), we drove south for a stop in Yreka, CA.  It’s a small town in a pretty area without much that’s noteworthy except for the views of Mount Shasta that can be seen from the southern edge of town.  It already has a sizable amount of snow, and hopefully it will continue to accumulate in this drought-stricken area. 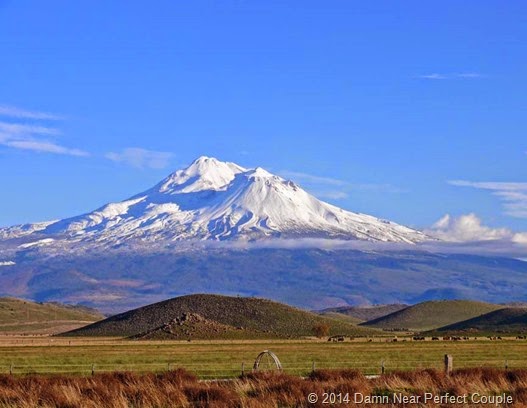 A bit south of Yreka, we left the interstate and headed east over the mountains to Reno.  It’s a beautiful drive on two-lane highways, and this time of year the aspen and cottonwood trees provided a wonderful backdrop to the pine forests. 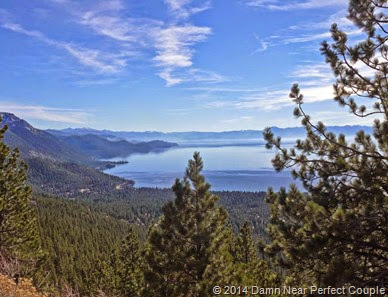 We spent a few days just outside Reno at the Sparks Marina RV Resort, and since we’ve been here many times, didn’t feel the need to explore or take photos.  We did however, take a drive to Lake Tahoe’s Incline Village for lunch and a view of the always-serene looking Lake.
On to Las Vegas, where we always stay at Nellis Air Force base.  We managed to hit town on the weekend of their annual airshow, and although we didn’t feel like joining the large crowds, we watched the Thunderbirds and other aircraft while sitting in our lawn chairs at our site. 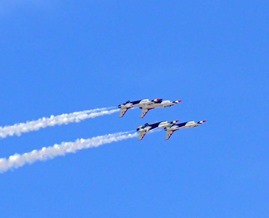 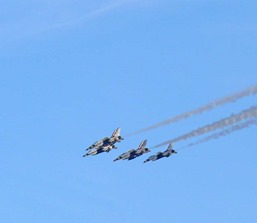 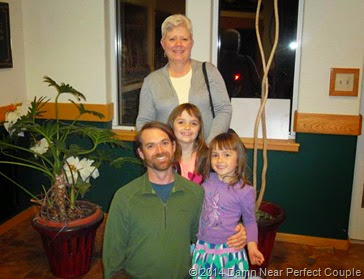 Soon we’ll pack up and head for the Tucson area for the winter.  But we’ll miss the Oregon coast and the friends we’ve made.  We were fortunate before we left to share an evening with our Interpretive Ranger and good friend Greg and his beautiful daughters Stella and Jada.  We had a great evening together – pizza, ice cream, and laughter.  What could be better?
We love the desert, but will miss the majesty of the Pacific Ocean, especially during coastal storms.  We’ll leave you with some images of a moderate storm we experienced while visiting Yaquina Head near Newport, Oregon: 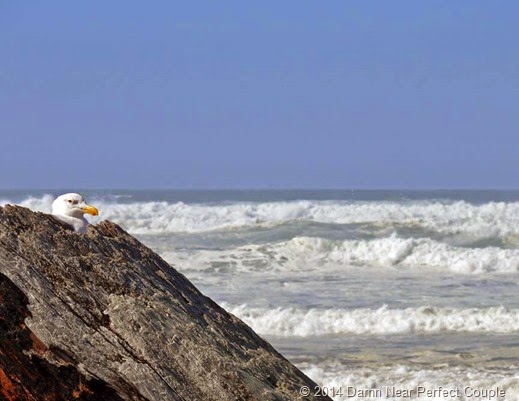 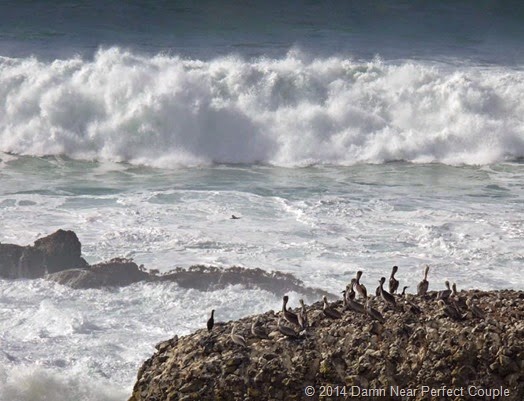 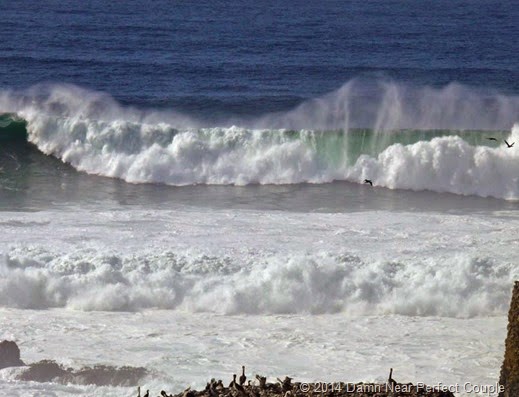 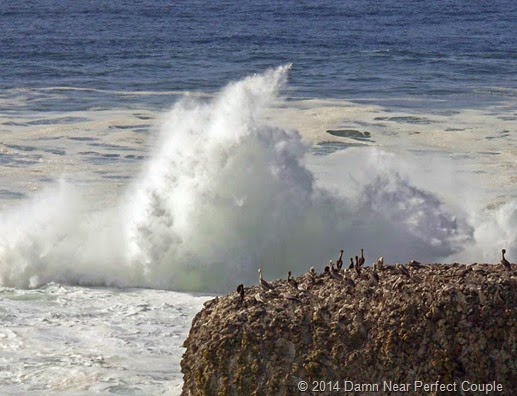 That’s it for now; we’re looking forward to visiting Southern Arizona again after a five-year absence.  We’ve already planned adventures, so check back with us!

Be sure to check a new update to Brenda Cooks!  (The link is located on the right side of the page)