We’ve begun our three-month volunteer adventure at the Coastal Artillery Museum located on beautiful Fort Worden State Park in Port Townsend, WA.  This year we decided to do something different; instead of heading south to Texas or Arizona, we decided to head north to the Olympic Peninsula.  We’ve always enjoyed the Pacific Northwest, and this is a great place to spend the winter.  Port Townsend is located 25 miles from Sequim, and is in the famous “rain shadow” of the Olympic Mountains that keeps the bulk of the winter rain away (we hope).  It’s a neat town and bills itself as one of only three “Victorian” seaports in the country.  We’ll post pictures of this interesting place in a later blog, but for now we’ll tell you about the http://www.parks.wa.gov/fortworden/interpretive.aspx
Fort Worden is an extensive state park with most of it’s original 1900-era buildings intact – in fact the Officer’s housing, NCO housing, and some of the barracks have been restored and are rented to people visiting the area.  The fort was originally built in 1902 for coastal defense, and was the main fort in the “triangle of death” – the three forts (Worden, Casey, and Flagler)that guarded the entrance to Puget Sound with it’s many shipyards.  Immense concrete gun batteries were built along the top of “Artillery Hill”, the highest point on the peninsula, and although the guns are no longer there, the structures still remain.  For us, we’re taking care of the museum, which displays the history of the Fort and of it’s activities during WWI, WWII, and the period afterward. 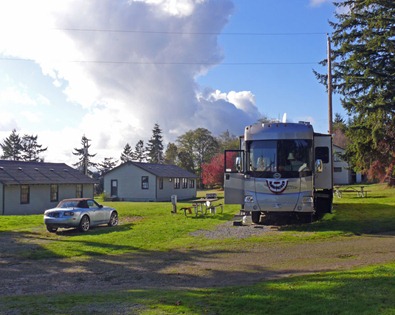 On our arrival, we were guided up the hill to the volunteer RV spots.  The trip was an adventure, taking us over broken asphalt, sharp turns, and through a deep hole caused by a broken water main, where we 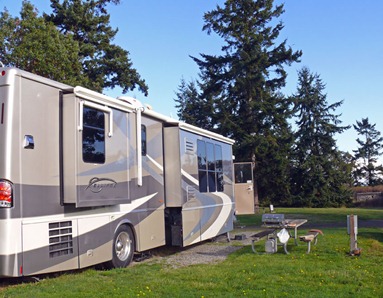 left one torn-off mud flap.  Finally parked, we set up on our home for the next three months – a grassy area with a view of the water in the distance and plenty of Black-tailed deer grazing under the watchful eye or our cat.

The museum is located in the first floor of one of the barracks that housed over 100 men, complete with a dining hall.  If you look close, you can see the barred windows.  The building was one of many that were used in the 1970s as a “diagnostic center” for troubled youth.  Apparently not all the diagnosis went well, since the windows have bars and there are four steel-lined cells in one of the closed wings. 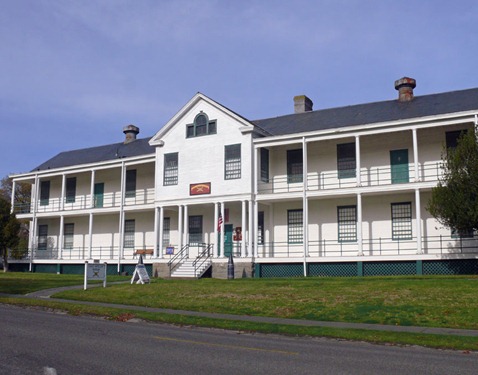 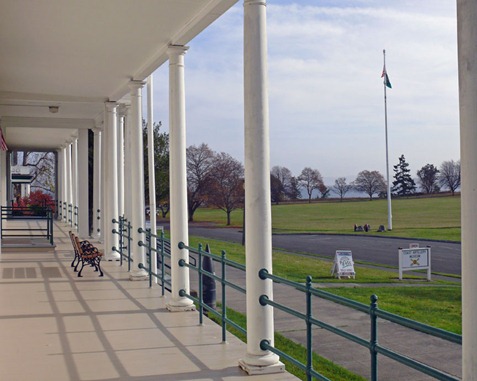 The museum has a surprisingly extensive collection of coastal artillery history, including photos, equipment, and videos.  It’s a subject not well known to those who didn’t live on the East or West coast (including us), and we’ve been surprised at the immensity of the fortifications.  But when you realize the need to protect the extensive shipyards in Puget Sound, you begin to understand why these forts were built.  You can read about the history of the fort here. 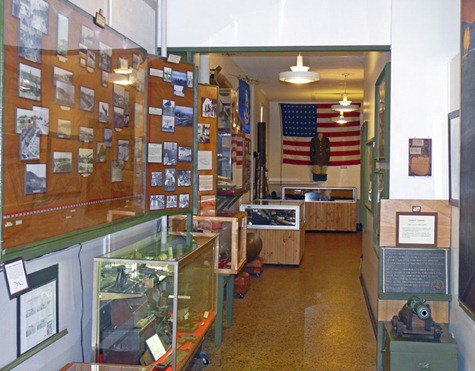 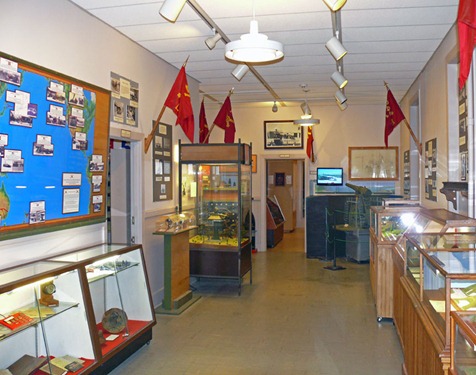 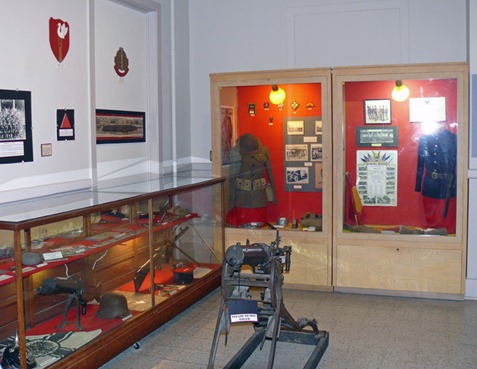 We’ll be here until the end of January and plan on spending a lot of time exploring the area – there’s a lot to see and do, so check back with us!
Posted by DNPC at 6:05 PM 4 comments:

In 1980, I was a Master Sergeant air traffic controller, stationed at McChord AFB near Tacoma, WA.  On Sunday morning, May 18th, I was working in the radar room below the control tower, enjoying my second or third cup of coffee, when around 8:30 there was a loud “boom” and the tower shook as if there was a nearby sonic boom.  It wasn’t long before the controller in the tower yelled over the intercom “Holy #$%^& – the mountain just blew up!”.  And so started my Mt. St. Helens experience.
We promptly went into a semi-confused near panic mode – after all, none of us had any experience in dealing with a cloud of volcanic ash.  We’d been told that if the mountain erupted, the ash would be hard and metallic (yup, the cloud rapidly covered half my radar screen), might conduct electricity, and would probably clog and kill our car engines.  Although the bulk of the ash drifted Northeast of us, it became dark and light ash began to fall.  One aircraft, a four-engine turboprop cargo contract hauler, insisted on taking off in spite of our warnings.  He did….and returned 20 minutes later with two engines out, one running rough, and one overheating.  He managed to land in spite of the fact that his windshield was sanded opaque by the ash, and the normally painted aircraft was down to the bare metal on all of the leading edges of wings and the nose.  After that, no one wanted to take off.  Although most of the fears of a heavy ash fall did not materialize, it was an interesting time, and one all of us that were there will always remember.
We hadn’t visited the area around the mountain since we left McChord in 1982, so we decided to spend an extra day as we drove north.  We stayed at a great RV Park in Kelso, the Brookhollow RV Park.  After days of overcast skies and rain, we were happy to see the clouds start to breakup as we left the park.  Our first stop was the Washington State Park visitor center at Silver Lake, not far off the interstate.  It’s a beautiful facility and a good place to learn about the mountain before continuing the drive.  From the parking lot, you could see the mountain in the distance as the clouds began to clear. 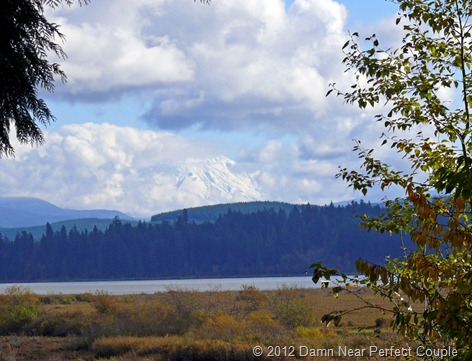 As we followed the highway along the Toutle River, we realized that the mountain was covered in a fresh coating of snow, and the clouds were slowly starting to burn off.  This valley is where the huge mudflow, taking homes and roads with it, funneled down from the eruption. 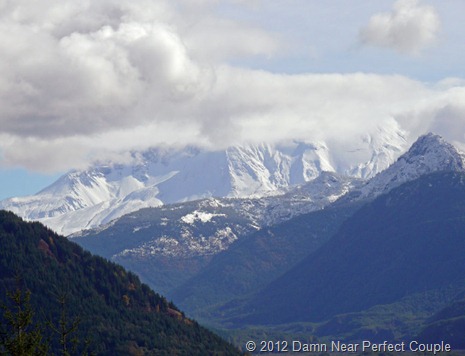 At the next viewpoint, we could begin to see the crater, still steaming as it slowly rebuilds the mountain.  A previous visitor had left a “snow elf” on the railing for us! 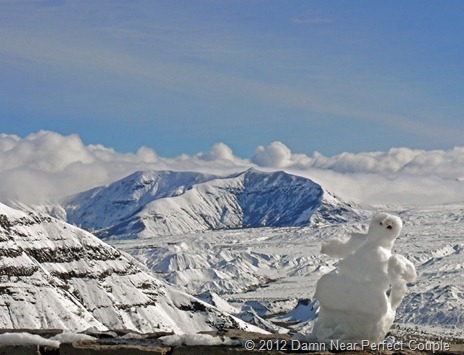 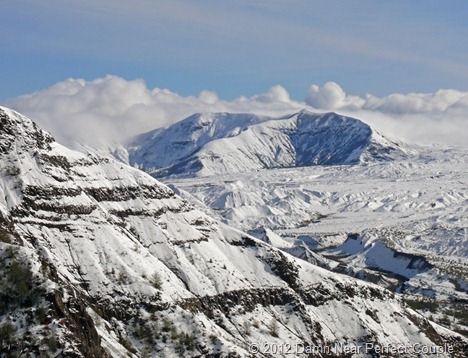 Our trip ended at the visitor center at Johnson Ridge, named for David Johnson, a volcanologist who was camped near this site and was the first to report the eruption with the radio call “Vancouver, Vancouver, this is it!”  Tragically, he wasn’t scheduled to be on the mountain, but was filling in for a friend.  His remains were never found.  You can read about him here.  From the visitor center, we had an unrestricted view of the mountain and crater, with tendrils of steam flowing from the new dome.  Makes you juuuust a little bit nervous! 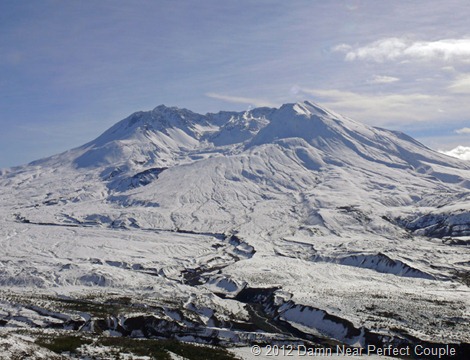 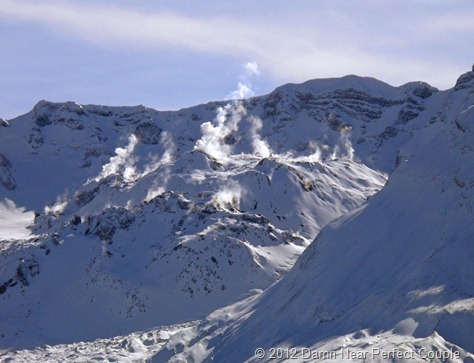 It was a fantastic weather day – except that it was cold! 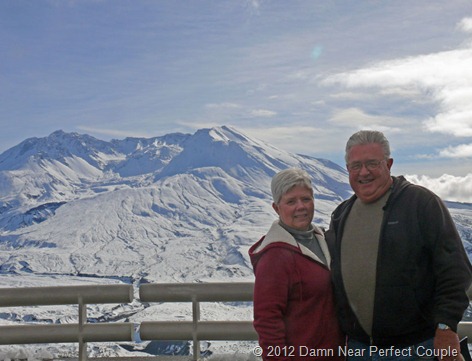 From inside the visitor center, large windows provided a panoramic view, and along the walls were stories, some sad, of the rescues made after the eruption.  We especially enjoyed one that told of a husband, wife, and baby being airlifted by helicopter.  The woman put the baby into their backpack to keep warm, and the helicopter crew kept yelling for her to throw away the backpack.  They couldn’t hear her response, and finally decided that if the backpack was so important to her, she could keep it.  One of the few stories with a happy ending…. 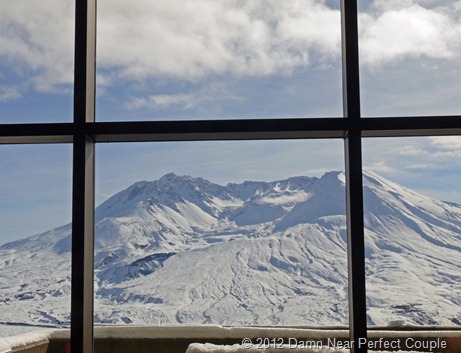 The visitor center has a large, well-appointed theater with an interesting movie about the eruption.  When the movie is finished, the screen raises to reveal this: 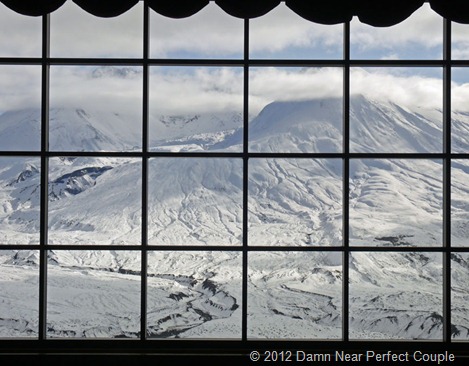 It was a fitting finale to an absolutely wonderful, memorable day.  We could visit the mountain for years again and never see it like this!  We’ll leave you with this panoramic photo (don’t forget to click on it to enlarge):

We’ll be starting our volunteer job at Fort Worden’s Coastal Artillery Museum soon, so check back and see us!
Posted by DNPC at 10:08 PM 4 comments: