A Christmas Story – In July 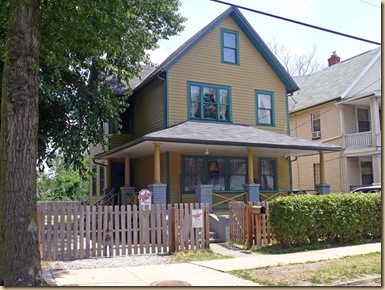 Brenda and I finally had a chance to spend time together and decided to take a day to explore the Northeast Ohio area. Where, we thought, with our limited time, should we go? The Art Museum? Rock and Roll Hall of Fame? Football Hall of Fame? No, we decided, we should visit someplace truly memorable, someplace meaningful and life altering…..and so we visited the home of the “old man”, Ralphie, and of course, the famous Leg Lamp.

The Christmas Story has always been a favorite movie of mine; after all, what male baby boomer didn’t lust for a multi-shot BB gun in their youth? The film connects in so many ways; the “double-dog dares”, decoder ring (mine was a “Captain Midnight Ovaltine decoder ring), and being from the Cleveland area, Christmas at Higbee’s. Brenda, like most women, doesn’t feel the connection, but face it, this is a story about guys and their guns, not one of those “heartwarming” family-is-reunited-isn’t-life-wonderful girly films. This film is more like “Young Rambo”.

The story of the house used for filming the movie is interesting. The director sent crews to scout out 19 locations throughout the midwest, places that would recreate the 40’s atmosphere and blue-collar neighborhood of the movie. Surprisingly, Cleveland was not on the list, but one crew, returning from another location, passed through the area in Cleveland known as the “Flats”, an area of steel mills bordered by working-class homes built in the 1920s. The director liked the area, and when approached, Higbee’s, the department store shown in the film, and a local antique auto club both agreed to provide support, and so the Cleveland location became the Hammond, Indiana of the story, and Higbee’s became “Goldblats’s” department store. 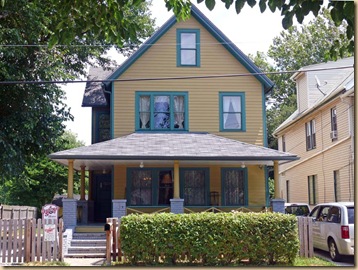 Equally interesting is the story of how the house became the restored movie location and museum, because if a young Annapolis Naval Academy graduate named Brian Jones hadn’t been eliminated from flight training, it never would have happened. Knowing how disappointed their son was because his dream of being a pilot wouldn’t come true, his parents, who knew of their son’s love of the movie, built and sent him a “major award” leg lamp, complete with wooden packing crate. After leaving the Navy, Jones augmented his income by building and selling leg lamps on Ebay, and when he learned that the original house was up for sale, he bought it, invested a great deal of money restoring the vacant, badly-maintained structure, and even bought the house across the street to become the museum and gift shop. Thanks to TNT Network’s 24-hour loop of the movie, thousands of fans have discovered the movie and visited the site – in fact, in August 2009, the house hosted it’s 100,000th visitor. 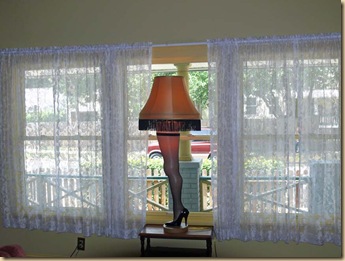 old but active residential area; a mix of restored and neglected homes and narrow streets. There’s no parking lot, so we found street parking a block away and walked on the cracked sidewalk, warily looking around in case Scut Farcus and his lackey Grover Dill were nearby. After getting our tickets at the gift shop, we assembled with others to hear the story of the film, and then entered hallowed ground……there, in all it’s glory, 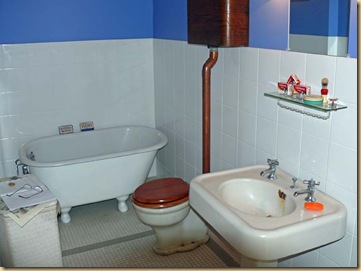 was the Major Award proudly displayed in the front window next to the tree. Everything in the house is as it was in the movie – down to the turkey in the oven (before being carried off by the evil Bumpus’ hounds). Upstairs, we walked through Raphie’s room, where Brenda tried on the Bunny Suit (quite fetching, isn’t she?), and viewed the bath 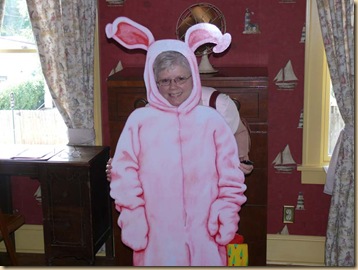 room with it’s supply of Lifebuoy soap bars for those moments of uncontrolled profanity. But the highlight of our visit to the house was meeting Ian Petrella, who played little brother Randy. Now 35 (yikes!), he’s spending time at the house this year, and we enjoyed talking to him about the movie (the “eat like a piggy” scene took three days to film). 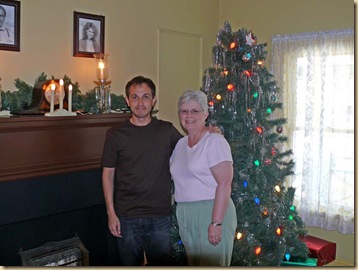 Interesting trivia – for the scene where Ralphie’s classmate has his tongue stuck to the flagpole, the crew used a length of PVC pipe painted gray to look like metal. They drilled a small hole in the pipe at…um…tongue level, hooked up a vacuum pump, and when filmed, the vacuum held the tongue against the pole as if it was frozen.

Our last stop was at the gift shop, a veritable cornucopia of must-have memorabilia! We browsed through the knit caps, jackets, and even the bunny suits, marveled at the array of pictures, cards, and authentic Christmas Story jewelry, and even an authentic Red Rider Range Model 200-shot carbine with compass in the stock. Brenda couldn’t pass up the boxes of “Oh Fudge” (both walnut and plain) and bought one of each for her mother……but one entire wall was the holy grail of souvenirs, the home run of shopping…..the Major Awards! There were full sized ones, complete with wood packing crates, medium sized, small ones, and even dashboard models….Oh, the glory of it all, standing among these magnificent prizes! And then, came a moment which will always be remembered as the moment that Brenda confirmed her unconditional love for me, when she said in a quiet voice; “why don’t you go ahead and buy the desk-sized leg lamp for the front of the motorhome”. WHOO HOO! Fearing she might change her mind, I quickly pushed other shoppers aside, gently cradled the coveted box in my arms, and charged to the register. I drove home more cautiously than ever before that day, avoiding bumps, carefully turning corners, taking all the precautions due a Major Award. Finally 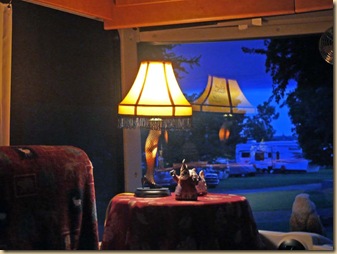 home, the lamp quickly found it’s place of honor on our steering wheel table, where it cast it’s warming glow. Each night the road in front of our motor home is crowded with couples, who on their nightly walk, stop and gaze at my Major Award. 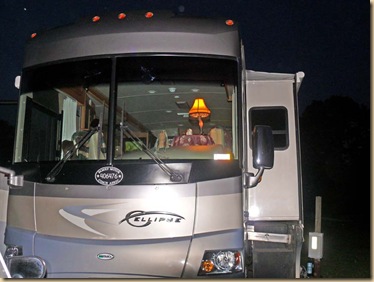 The men, mouths gaping, green with envy as they look upon the lamp (the leg has it’s own light to better highlight the mesh stockings), their wives, shaking their heads and mouthing the words, “no”, “never”, and the all too often heard “don’t even think about it!”. All this while I, smile of satisfaction and knowledge of true love gained, gaze upon every man’s Major Award……ah, if only the “Old Man” was here to see it!

Thanks Brenda! YOU are truly my Major Award!

Thanks for stopping by, come back and see what new craziness we’re into!

From Our Travel Vault – Nova Scotia

Before we became full timers, we were avid explorers, and even though we were still working, we took time each year to make a two-week “road trip”. For us, that meant packing up our Mazda Miata (one gym bag each of clothes, one cosmetic case for Brenda, one laundry bag, and a couple of rolls of quarters for the Laundromat), and hitting the road. We didn’t have the time to enjoy a leisurely pace like we do now, but we covered a lot of ground and saw so many incredible places – many that we’ve been back to and many that we plan to, especially the subject of this trip – beautiful Nova Scotia. 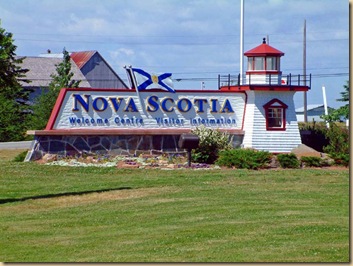 We visited Nova Scotia in the early summer, when the days were beginning to become comfortably warm and everything had turned green. Entering from New Brunswick, we were charmed by the visitor center – cheerfully painted like so many of the boats and homes we’d see as we toured the area. We stayed in Halifax, a large city with an interesting history and a waterfront full of great restaurants, shops, and museums. 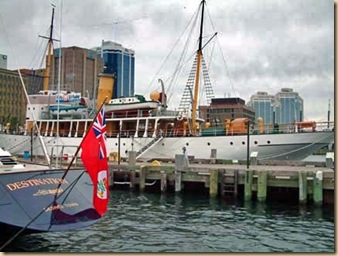 We visited the Maritime Museum of the Atlantic, and were surprised to hear the story of the WWI Halifax Explosion, when two ships, one laden with explosives, collided in the harbor and caused the largest ever non-nuclear man-made explosion, killing over 1500 residents. The story of how Halifax was devastated is extraordinary, and you can read a great version here. In another area of the museum, we viewed a deckchair from the Titanic and learned that as the closest port to the sinking, over 200 recovered victims and their belongings were brought here, and that 150 are buried in the area. This is an amazing facility, and we hope to return when we can spend more time. Nearby is another one-of-a-kind facility, the museum of Canada’s immigration, Pier 21 . It was truly impressive – we never thought of immigration to North America other than through Ellis Island, yet 1.5 million men, women, and children came through this place on their way to a new life. Films, images, and exhibits bring to life what it must have like to have passed through these buildings – what a remarkable place! 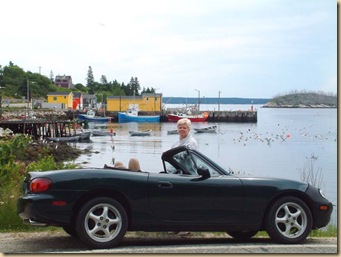 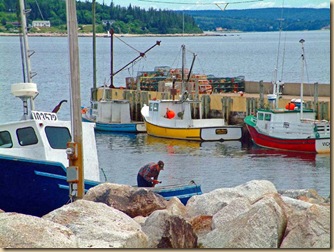 While we enjoyed Halifax, touring the countryside is the real joy of visiting Nova Scotia. As you drive the coast highway, each turn takes you to another fishing village, with colorful boats and houses. The best way 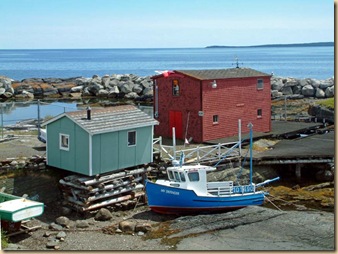 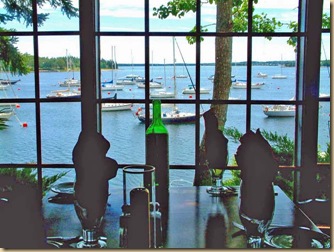 to describe it is that it looks like a living jigsaw puzzle. On the North coast, the Bay of Fundy produces incredible tides, up to 50 feet, and what looks like miles of mud flats in the morning becomes water-covered bay in the afternoon. Small lighthouses and great restaurants are everywhere on the coast, and we stopped to get Brenda a lobster here and there while I enjoyed the Digby Scallops. Everywhere we traveled, we found people to be friendly and helpful, a quality we didn’t always find in New Brunswick.

If you visit Nova Scotia, chances are you’ll journey to the area’s most 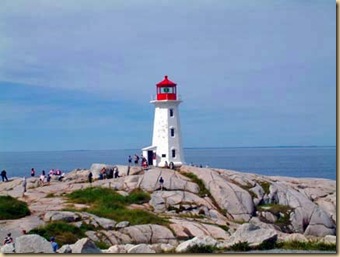 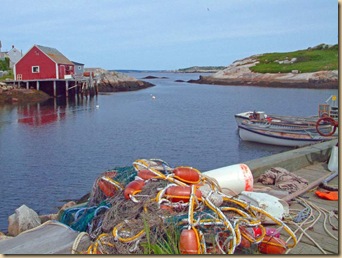 photographed site, Peggy’s Cove. And for good reason. In spite of all of the tour busses and cars crowding the parking lots, it somehow remains what we all imagine is the ideal image of an North Atlantic fishing village. The lighthouse is perfect, the village picturesque, and in spite of all the people, the atmosphere is somehow relaxing. A truly magical place to visit.

We’ll be back soon, hopefully with some visits to local attractions, so stay with us & c’mon back!