From Our Travel Vault – Mt. Washington Almost as much fun as touring the country in an RV is a road trip in a sports car, and on this trip we headed to New England in our 99’ Miata to cruise the back roads and explore. 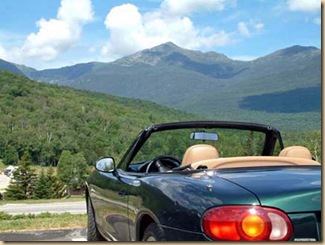 One of our interests was Mt. Washington, the highest mountain in the Northeastern United States at 6288’. For us, having spent so much time out west and camping at altitudes over 7000’, we didn’t take Mt. Washington very seriously. Big mistake.

The day before we drove to the top, we stopped at an overlook to view the mountain in the distance; not particularly impressive, no craggy peaks or Matterhorn-looking ice and snow. We did notice the cloud cover, and decided to 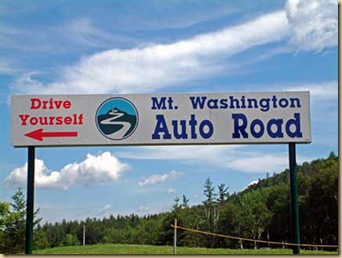 get an early start the next morning to try and have a clear view as we drove to the top. Of course for us, early meant 9:00 or so, and after paying our $20 for the privilege of driving ourselves, we started up the road. As we drove through the trees on the nicely paved asphalt road, I wondered what the big deal was about driving the mountain; after all, they made a big deal about selling “I drove Mt. Washington” bumper stickers at the entrance station. About then we broke out of the trees where the road turned into a gravel, lane and-a-half, no-guardrail, big drop-off nightmare….and as we continued, we entered the clouds. 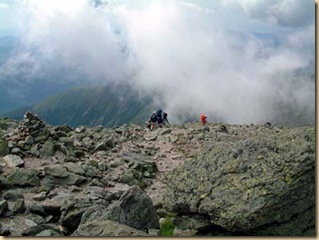 With the top down (after all, it was 70 degrees when we started), heater going full blast, almost zero visibility in freezing fog , and the knowledge that one misstep meant certain death, we quickly lost the “fun” aspect of driving the mountain. You would have thought that Brenda’s screams would have cleared away at least some of the fog, but no, it stuck to us like jam on a Cracker Barrel biscuit. If that wasn’t enough, we 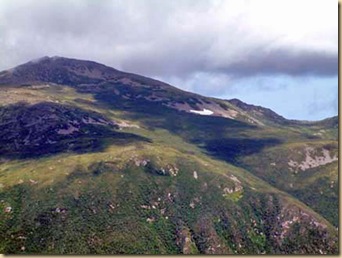 were almost run off the road by the 12-passenger vans, called “stages” that normal people bought seats on to make the trip. The drivers, making the up and down run dozens of times a day, entertained themselves by terrorizing those of us who drove the route. But miraculously, we 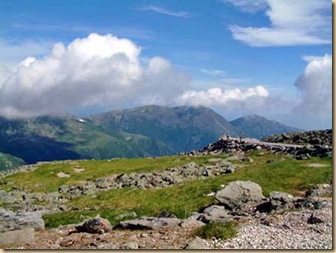 reached the top, where it was 32 degrees and socked in, with occasional breaks that revealed amazing scenery. 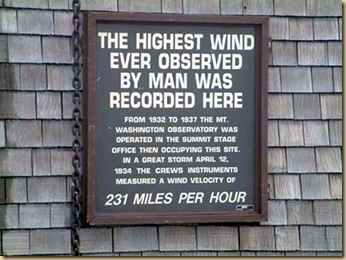 Walking around the visitor area, we came across this sign; I can’t imagine what it must have like to be trapped in a cabin here with the wind roaring over 200 mph. 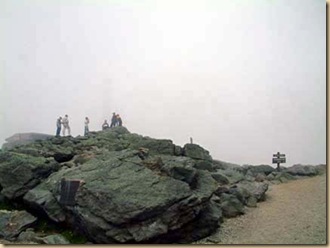 We also explored the visitor center which provided a wealth of information; however, they may want to reconsider that the first thing you see upon entering is a list of names of all those who perished on the mountain. Yikes – what a welcome! But still, it’s an amazing place and one we’ll come back to some day….although next time I think we’ll take the “stage”.

Thanks for visiting; C’mon back!