Hallelujah! A Trip to Salvation Mountain and East Jesus

I imagine that most people, when thinking of living full-time in a motorhome, would assume that we’d be visiting the popular, well known places, like Yellowstone, Glacier, or the Grand Canyon.   Phhhhhht!  Not us!  We seek out the less known, but colorful and interesting, if not exotic, locals.  And so it was that we headed out for a visit to Slab City and Salvation Mountain.

An abandoned WWII military base of a bit over 600 acres, Slab City is at the end of the road about 6 miles from Niland, a depressing little town near the Salton Sea.  The property is state-owned, but since it resembles the surface of the moon with scrawny bushes, no one wants it, and after years of garbage, trash, and unrecognizable objects accumulating everywhere, it’s not likely to attract any developers.  Named for the concrete slabs left from torn-down buildings, the residents are a curious mix of boondocking snowbirds, free-spirited dropouts, and, well, lunatics.  They have to be a bit crazed to live here in the desert where the summer temperature tops 120 degrees, there’s no electricity, water, or sewer – and certainly no trash pick-up. (There’s a great article about Slab City here) 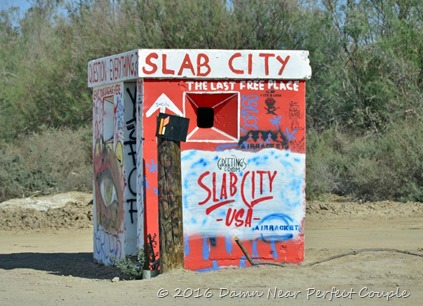 Arriving at Slab city we were greeted by the old guard shack, brightly painted, and pointing the way.  As the “last free place”, everyone is free to drive in, look around, park their vehicle, and begin gaily tossing their trash out their window. 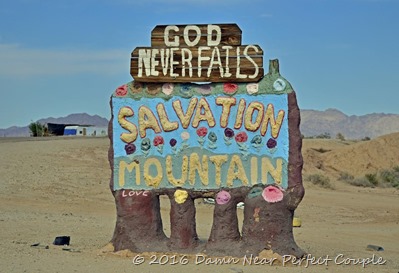 At the entrance is Slab City’s most famous structure, Salvation Mountain.  While much of the area is amusing, if not depressing, Salvation Mountain is truly an amazing story about one man’s faith and determination.  It’s a long but interesting story, (you can read about it here), but a man named Leonard Knight began building the mountain in 1984 and is still working on it.  Using adobe clay mixed with straw and coveried with paint (over 100,000) gallons), the mountain today is a remarkable sight to behold.  It’s indescribable, so I won’t try – here are some images:  (note – the first image has a person to the right of the heart to show you the scale) 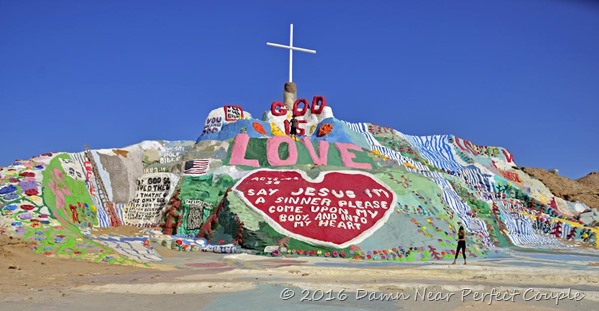 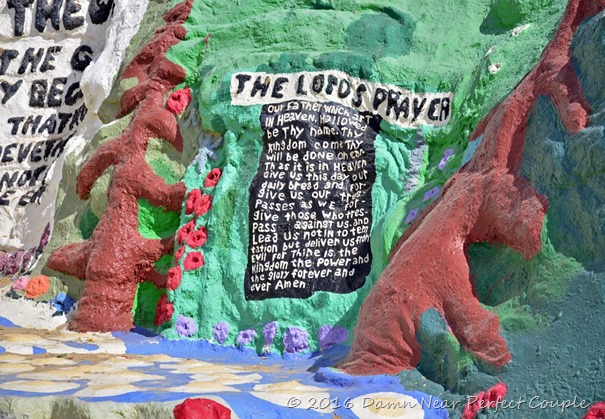 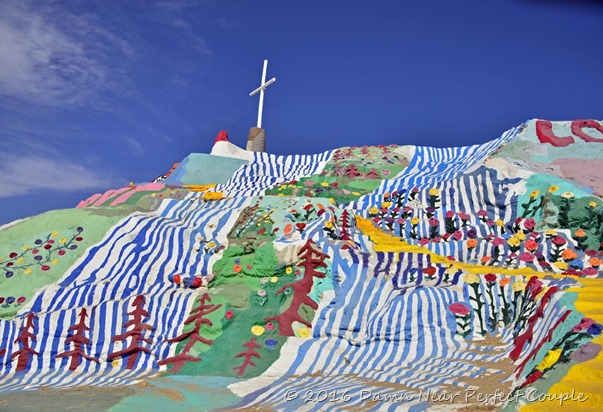 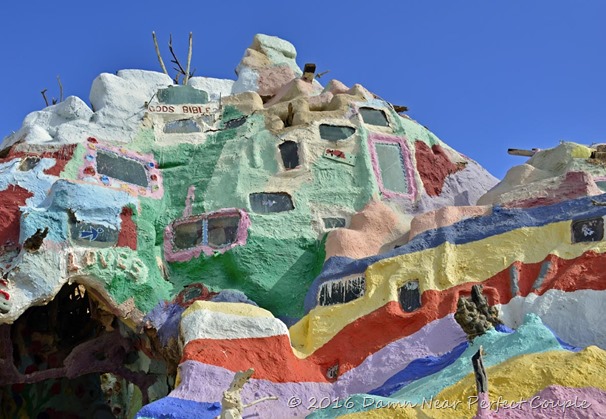 There are a number of grottos, filled with colorful paintings: 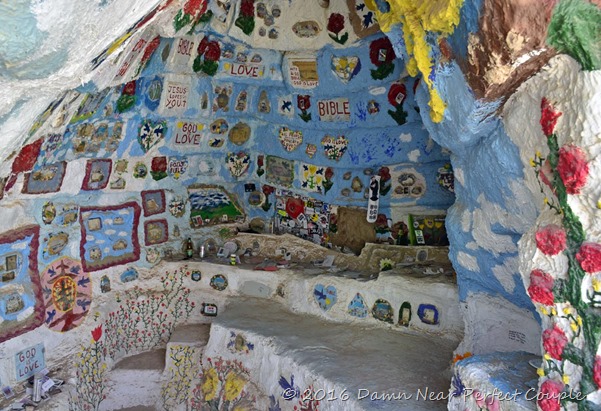 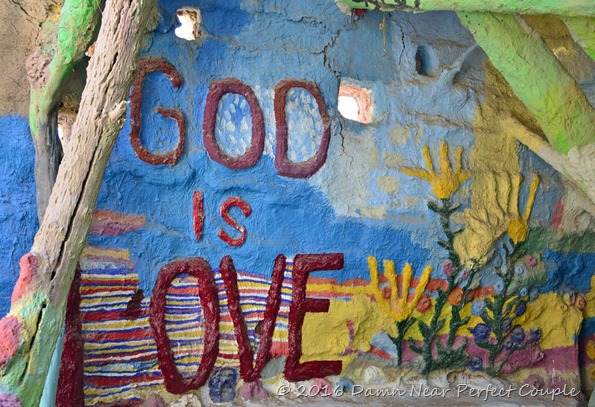 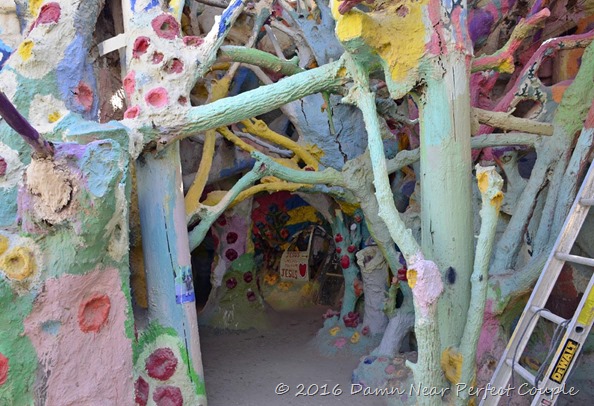 Scattered around the mountain are old cars and trucks, each painted to match the Salvation Mountain message. 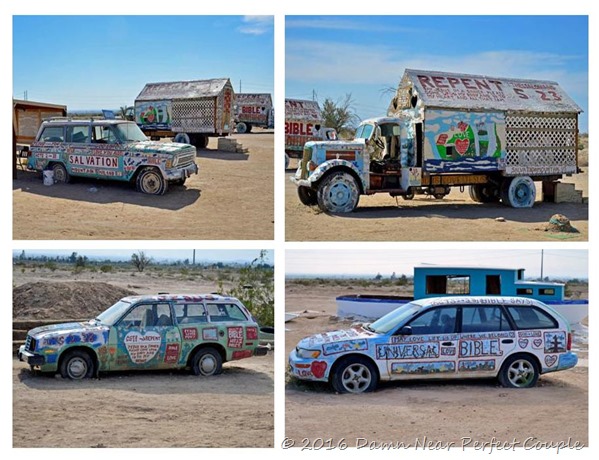 Driving further on through Slab City we were treated to a seemingly endless vista of “customized” housing – it wouldn’t have surprised us to see a Zombie staggering along the road: 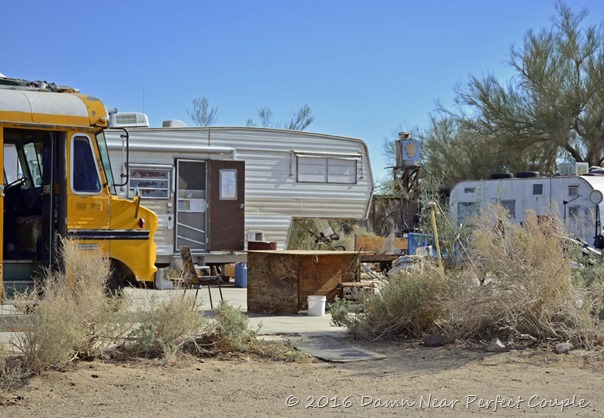 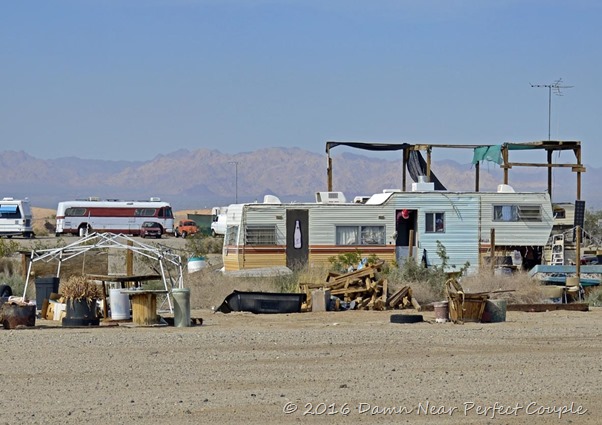 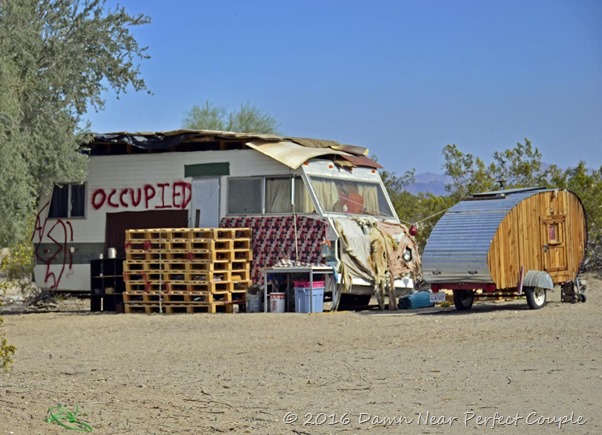 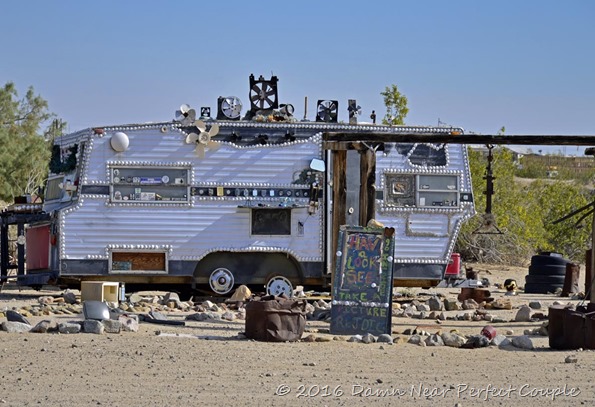 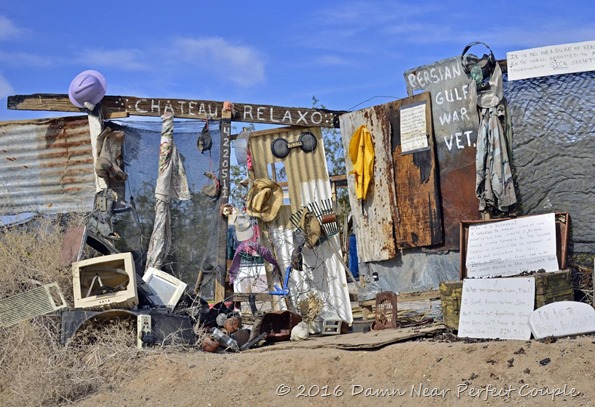 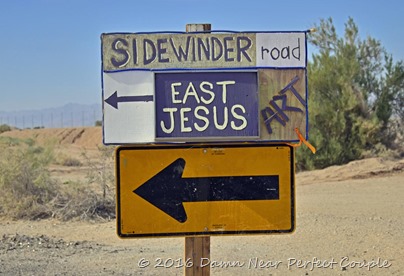 Growing up in Ohio, I  remember some of the older folks using the phrase “East Jesus”, as in “boy, that wind last night blew my lawn chairs clear to East Jesus!”.  In other words, a place way out in the boonies, which is where we were, of course.  Sure enough, at the intersection of the dirt road, we came to the sign.  Surprisingly, after driving through the Zombieland of Slab City, we were impressed with East Jesus.  It’s actually a recognized folk art project;  “East Jesus is an experimental, habitable, extensible artwork in progress since 2006.”  It’s an area of outdoor art created with discards, junk, and trash – of which the area has a seemingly endless supply.  The folks are friendly, there are free tours, and it has some amazing creations.  The giant lizard below is actually a chicken wire frame with plastic trash bags used as the “skin”: 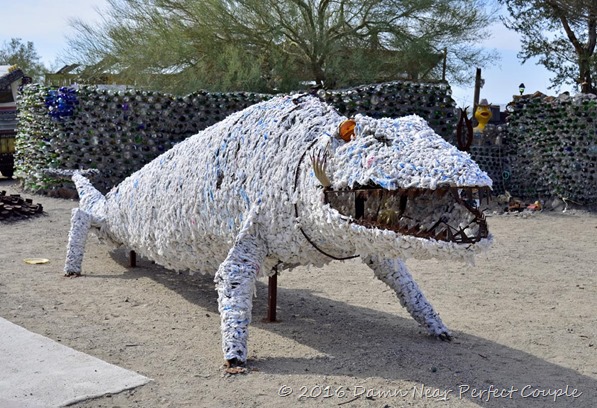 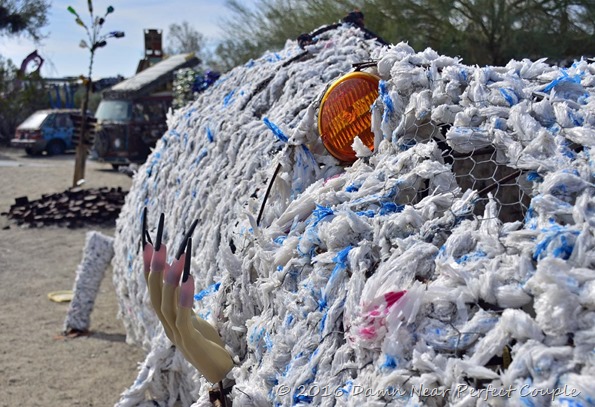 Some of the other artworks: 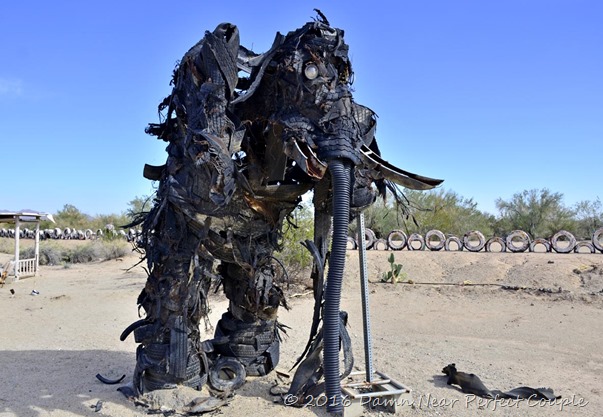 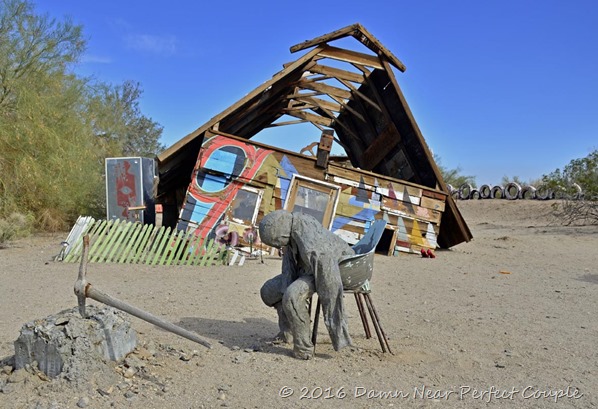 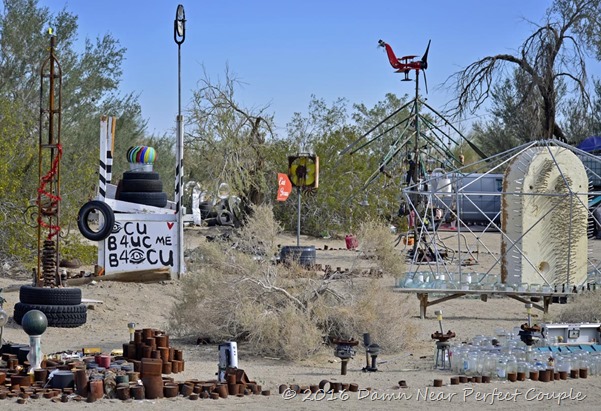 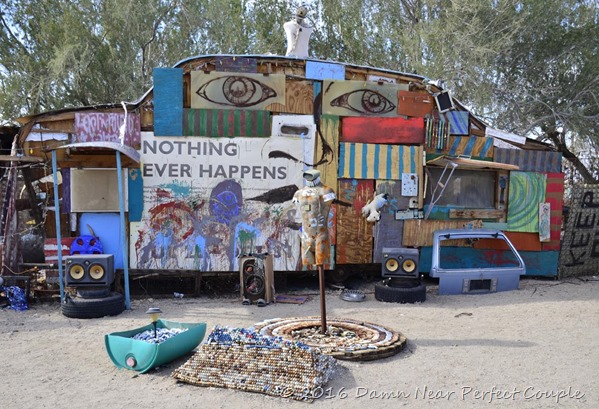 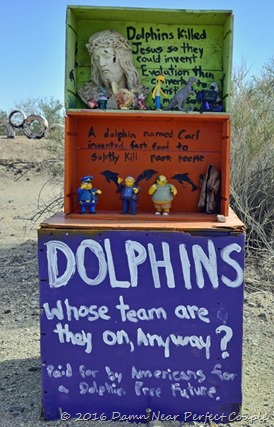 Unlike the rest of Slab City, East Jesus is a fairly well organized association of artists, is a recognized non-profit (The Chasterus Foundation), and is recognized by the California Association of Museums.  But it also has no electricity, water, or sewer.  Instead they use solar panels and  have developed a combined system for simultaneously composting food waste and curing and breaking down human waste into rich soil, which is then mixed with native earth to provide nourishment for their organic garden.   Very noble…..but we’ll stay in our air-conditioned, generator-powered, shower-equipped motorhome.

And finally, the most iconic of the East Jesus artworks – the TV Wall:

In keeping with out visits to strange and unusual places, we drove to the Salton Sea’s shore to visit Bombay Beach, described as the “most famous depressing place in California”, and after seeing Slab City, that’s quite a statement.  Consider this postcard from the late 50s: 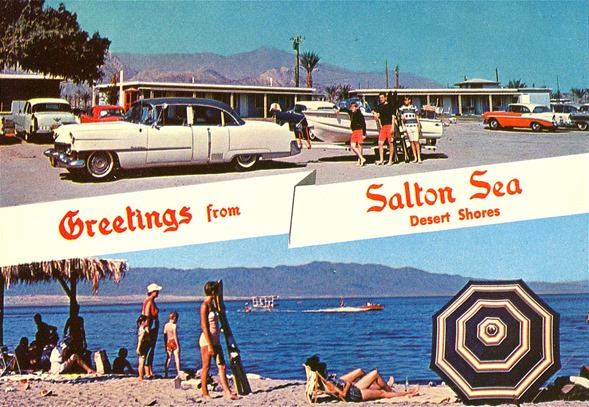 It was at the time ten blocks of paradise – palm trees, sandy beaches, and clear blue water.  Today, it looks like something out of a “Mad Max” movie – abandoned shells of mobile homes, salt-encrusted remains of docks, and beaches covered by dead fish and slime.  Amazingly, some people still reside here, although I doubt they use the beach.  The smell is indescribable – something akin to rotten fish mixed with sulfer and a touch of fecal matter.  Looking at it now, it’s hard to believe it once looked like the picture above. 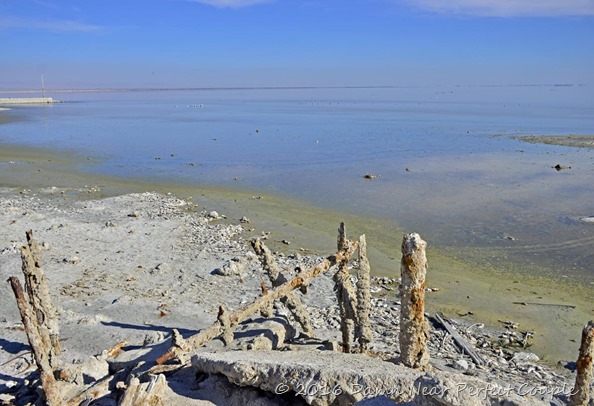 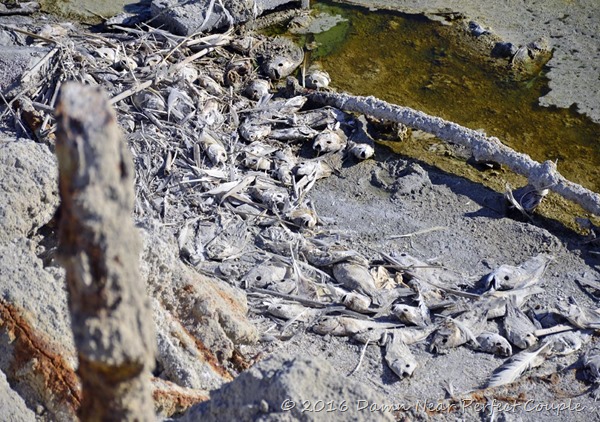 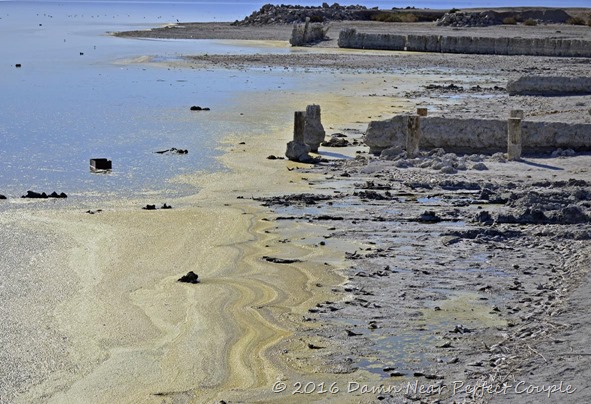 And finally, if you’d like to sit and soak your tired feet, here’s a ready-made place for you: 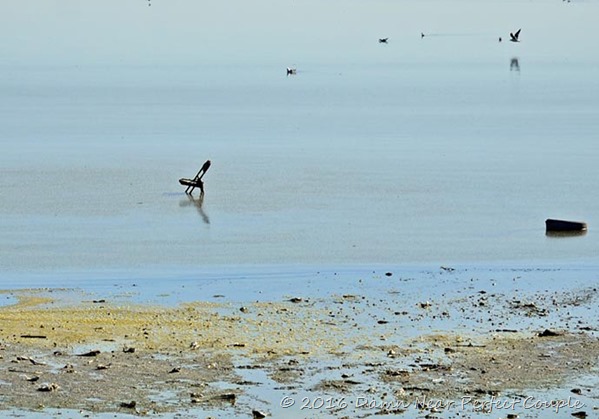 There is currently an effort by the State of California to pump fresh water into the Salton Sea in an attempt to restore it a stable, less alkaline level.  Looking at the size of this huge lake, it seems doubtful that anything can be done at this late date to make it attractive again, but at least it would preserve this important area for migrating waterfowl and shorebirds.

That’s it for this visit, we’re leaving the area, so stay tuned to see where we end of next!