After extending our stay in Anacortes because of snow storms that closed Snoqualmie Pass, we headed over the Cascades and down into the little town of Cle Elum. 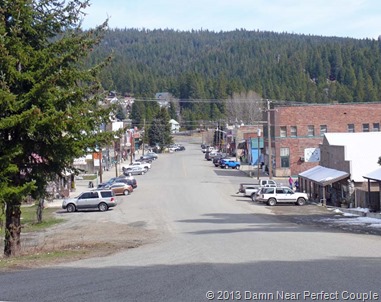 We stayed here so that we could make a return visit to the town of Roslyn, which was the setting for one of our favorite TV series, Northern Exposure.  As Cicily, Alaska, Roslyn was a credible setting – surrounded by mountains, forests, and with the Cle Elum river running nearby. 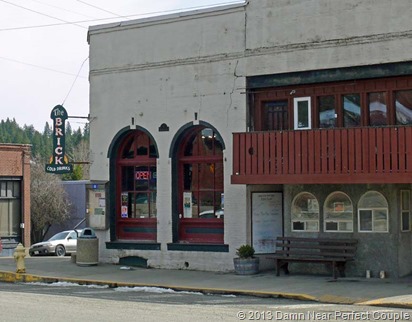 Not much has changed since the series ended in 1995, and the view from the edge of town looks much like the film of the series opening.  On the corner is the Brick Saloon, used for many exterior shots in the series, and with an interesting history as the state’s oldest continuously operating bar.  This was our second visit to Roslyn and the Brick, and we stopped in for lunch before taking a quick tour around town.  It’s amazing how many Northern Exposure fans still visit Roslyn. 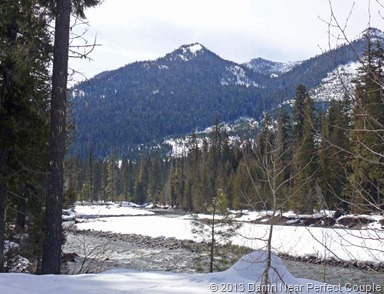 We stopped in at “Dr. Joel Fleischman’s” office, now a souvenir store, and were told that on this dreary mid-week day we were the third couple to have visited because of the series.  Although the town would rather be known for it’s mining history, one remnant of the series remains untouched, the studios of KBHR radio, home of “Chris in the Morning”.  Taking the road out of town along the river, it was obvious that winter was still present, and why the area doubled as an Alaskan location.  It was a fun time; and walking down the street from the “Brick”, we could visualize Ed, Maurice, Ruth-Ann, and Maggie going about their lives in “Cicily”.  If you missed it, you can read about our first trip here.
Our next stop was the Yakama Nation RV Park in Toppinish, just down the road from Yakima.  Yes, the spelling is different; it seems the settlers of the town didn’t ask the Yakama tribe how they spelled their name.  The park was nice (our review), and the casino (Brenda’s review) was OK.  We were both suffering from allergies (me) or a cold (Brenda), so we didn’t explore too much of the area.  The area is a huge agricultural region with miles and miles of apple, pear, plum, and peach orchards, with a view of Mt Adams in the distance. 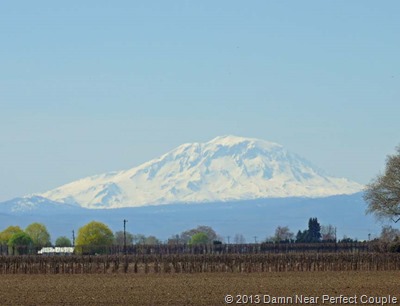 It is also the “hops” growing capital of the country, so for us beer lovers it’s a holy place.  This time of year the hops haven’t been planted yet, so all we saw were acres of wire netting suspended by telephone poles.  You can see how they look here.
Our final stop in Washington was at Fairchild Air Force Base, just west of Spokane.  We always enjoy a stay here, the base campground is very nice (our review), and there’s plenty to see and do in the area.  Not far from the base is the Turnbull National Wildlife Refuge, a beautiful area of forest and lakes, with a great auto tour loop.  We visited late in the day, and were surprised to come around a corner and see this great-looking young moose.  She didn’t seem to be bothered by our presence, and struck this pose: 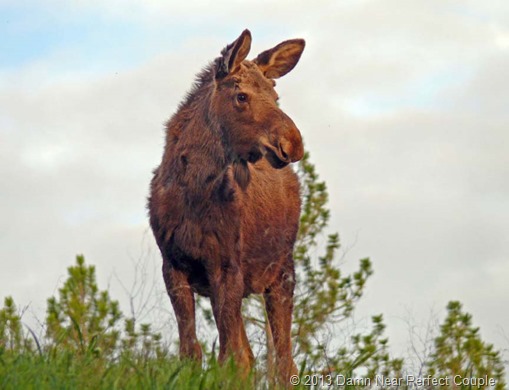 What a great face!  Brenda wanted to take her home, of course.  Can you blame her? 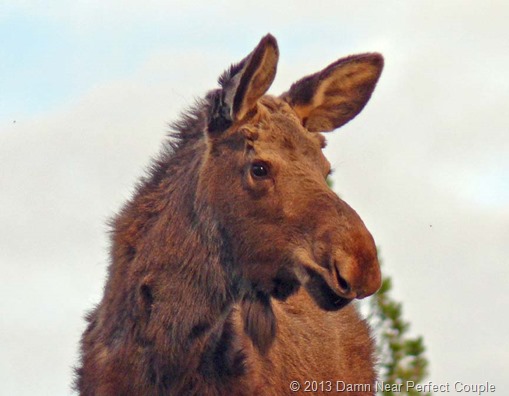 If you’ve followed our travels, you know how much Brenda loves seeing moose, so it was a treat to come around another bend and see this: 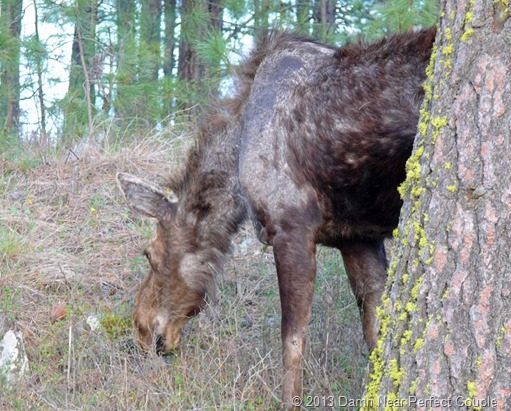 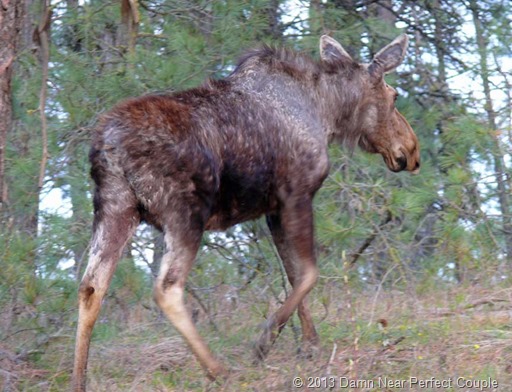 Having been moose-fortified, a few days later we headed west to the Grand Coulee Dam, the country’s largest producer of hydroelectric power. 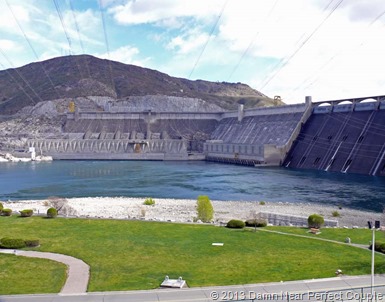 Located on the upper reaches of the Columbia River, it forms a 125 square mile lake that stretches north to the Canadian border.  This isn’t a particularly scenic area, with a couple of economically depressed towns supporting the dam workers and a few local residents, but the dam itself is impressive. 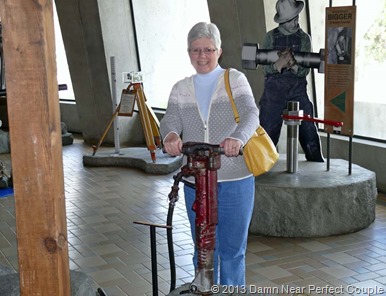 We stopped in the nicely-done visitor center where Brenda had a chance to use a jackhammer.  After giving it a try, she quickly announced her intentions to give up her dreams as a construction career.  We were both amused by an interesting exhibit of a stack of 48 water jugs, from every state at the time, that were emptied at the dam’s opening ceremony by gowned and crowned beauty queens.  Not something you’d expect to see today! 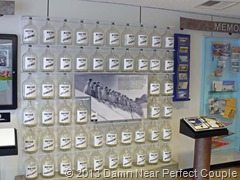 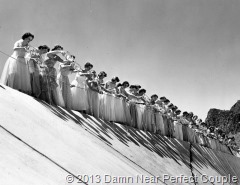 Finally, it occurred to me that many of you have never been on an Air Force base and might be interested in a quick tour.  Fairchild is a fairly typical base, with 35 KC-135 aerial refueling tankers and 2000 active-duty airman.  This is the first visit for us in the last six years where a number of the aircraft were present; they’re in high demand for refueling overseas and are often deployed. 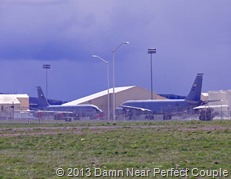 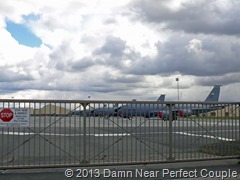 The base facilities are very good, the Commissary is very nice, and there’s a BX with a small food court, barber and beauty salons, and even a Starbucks.  The commissary, which looks like any other grocery store, is the only facility that offers a price advantage over off-base shopping, and we always stock up when one is available. 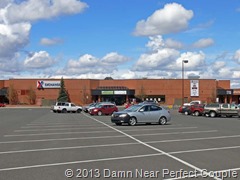 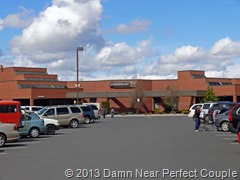 The base has a nice housing area, child care facility, and even it’s own elementary school. 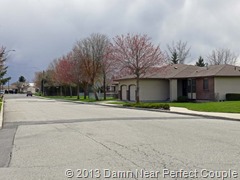 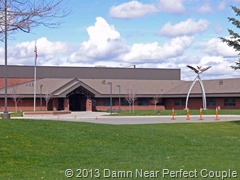 Every base has a display of aircraft that were once based there, and until 1991, B-52s were a part of the Fairchild mission.  Both then and now, the mission motto painted on the flight line hangers remains the same. 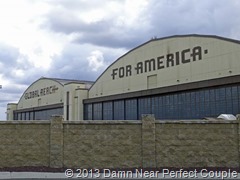 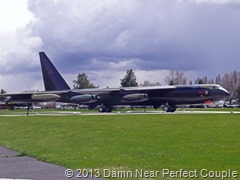 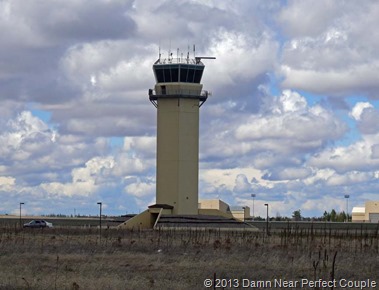 And finally, the control tower.  While I was never stationed at Fairchild AFB, towers like this were my “office” at ten different locations around the world during my career.

That’s it for now – we’ve traveled across the Idaho Panhandle and are now spending time visiting friends in the Bitterroot Valley of Montana.  We’ll have a week here, so check back and see what’ve been doing!
Posted by DNPC at 1:55 PM 6 comments: