We've moved up the coast from the Rockport/Fulton area to Palacios (Texas pronunciation: "Play-shuss"), a small town on the Tres Palacios Bay and the home of the largest shrimp boat fleet in Texas. It's another of the coastal towns that exhibits lots of poverty with flashes of affluence. Driving down a street of decaying, junk-strewn houses, you'll suddenly come upon a large, well-maintained, and expensive home. 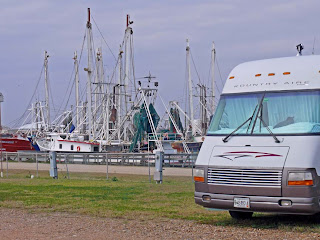 The downtown area is largely 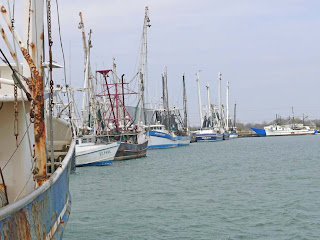 deserted, although we enjoyed having a cup of coffee and browsing the local book store. We stayed at the Bay Side RV Park, a nice park that just reopened after a two-year closure. The owner and camp host have been 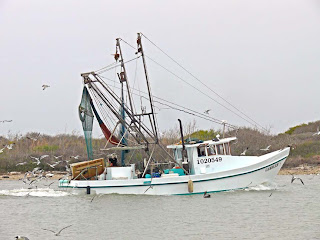 wonderful - friendly and very helpful. On Friday, they hosted a free fish fry for the park occupants. Brenda baked a cheesecake (Williams-Sonoma Double Chocolate), others brought side dishes, and we had a great time getting to know each other and sharing stories. Once again, after the cheesecake, I lost my identity and became known in the park as "the husband of Brenda, the cheesecake goddess". The park sits on the bay and gave us an unobstructed view of the water, and in back of the park was the marina, filled with shrimp boats. Quiet nights, the morning water view, and the sound of gulls circling the shrimp boats made for a very pleasant stay.
This was a good location for field trips to Brazoria and San Bernard National Wildlife Refuges, 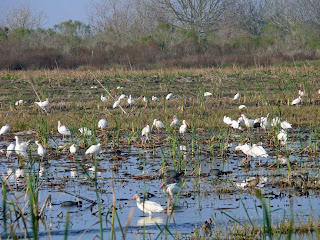 located further north up the coast. In our posts of November, 2006, we describe our brief volunteer stint at Brazoria, and why we decided to leave. It was interesting to return and visit; not much has changed for the better, although the mosquitoes weren't as bad. Unfortunately, the salt-water damage from the storm surge of Hurricane Ike destroyed many of the fresh-water ponds, and those that were left were dried up due to the extensive drought. We did see some Roseate Spoonbills and a few Great Egrets, but overall were disappointed with the visit. We 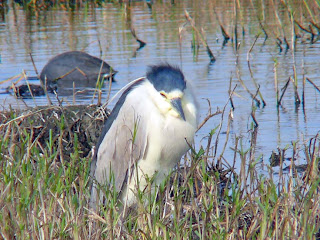 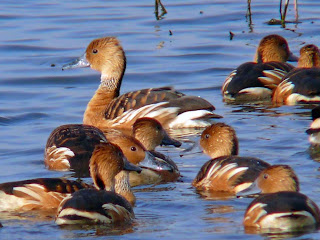 continued on to San Bernard NWR, where there was less hurricane damage and a large fresh-water pond that was filled with shorebirds and ducks. White and Glossy Ibis were everywhere, and I caught this Black-crowned Night Heron napping in the middle of the crowd. Brenda, our family duck expert, found these Fulvous Whistling Ducks, a beautiful duck that we hadn't seen before.
We also visited Port O'Connor, and Matagorda Island, two other waterfront areas with interesting birding where we saw our first Wood Stork, watched dolphins and their young play in the harbor, and took this picture of a Brown Pelican sitting on a pole. 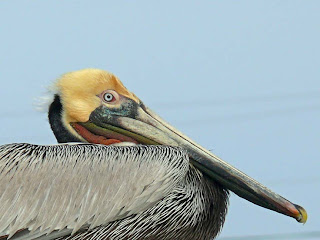 In Bay City, we visited the museum to learn about LaSalle's ill-fated exploration of the area. It seems strange to think of French explorers in this area, and it's hard to imagine a more bumbling explorer than LaSalle. He missed the mouth of the Mississippi by 500 miles, ending up in Matagorda bay, a mosquito and snake-ridden hellhole where they established a small fort. It wasn't long before their ship was run aground by a storm and sunk, and soon hostile indians, snakebites, and disease had reduced their original number from 300 to 37. At this point, LaSalle took 17 men and left for Illinois (huh?) to get help. A year later, indians killed or kidnapped those left behind, and shortly afterward, LaSalle's men killed him somewhere in what is now Northeast Texas. Not exactly a Captain James Kirk exploration story. What was a good story is that his ship, the Belle, was found in 12 feet of mud and silt with many of the artifacts still intact. Instead of trying to raise the remains, a 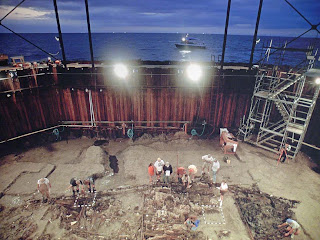 cofferdam was built around the ship to allow archeologists access the wreck. As a result, a large quantity of interesting items were recovered, and many of them are on display at this and other museums along the Gulf Coast. You can read more about the reovery of the Belle and her contents here.
We certainly stayed busy on our visit here and enjoyed eating fresh shrimp. Of course, on the Texas Gulf Coast, you're limited to fried shrimp, chicken-fried shrimp, deep-fried shrimp, and double-deep fried shrimp. Apparently Texans consider it unsightly to view a shrimp naked and feel compelled to cover the poor thing with batter. Ah well, it was still tasty.
We've left the coast and are heading for West Texas - come back and see where we are!
Posted by DNPC at 9:11 AM No comments: 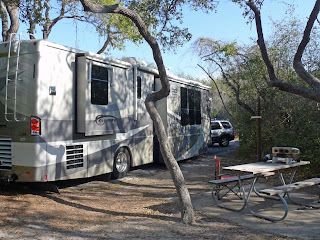 After spending time in the Texas hill country, it was time for a change and we've moved to Goose Island State park, on the coast near Rockport. It's another quality state park, with large RV sites both in the woods and on the water, organized birding and photo workshops, and extensive fishing and boating facilities. We looked at the water sites, but they were not very level, it was very windy, and the smell from decaying seaweed was pretty offensive. The wooded sites, although small at the entrance, opened up into a large private area with picnic table, fire pit, and barbecue stand. The only drawbacks were that there were no sewer hookups and electric power was limited to 30Amps. It was a great location for day trips to explore the area, and our first trip was 40 miles down the coast to Corpus Christi. 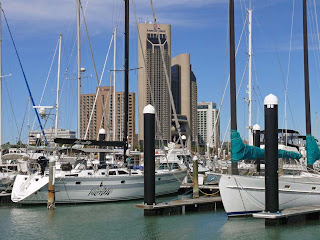 This is a large city with lots to see and do, but on this trip we explored the waterfront, had lunch at a dockside seafood restaurant, and visited the USS Lexington, an aircraft carrier which has been turned into a floating museum. Commissioned in 1943, it was named to commemorate the aircraft carrier sunk during the Battle of the Coral Sea in 1942, and when it was decommissioned in 1991, was the longest-serving carrier of its class. Nicknamed the "Blue Ghost" because of its unique paint scheme, it saw combat in WWII, then spent most of its remaining years as the primary training carrier for naval aviation students. Exploring the Lexington is a true learning experience; the first thing that amazed us was the 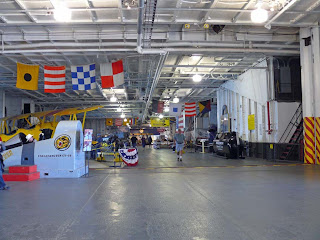 sheer size for such an older carrier. Entering the ship into the hanger deck, you walk in each direction for a long way before reaching the bow or stern. The deck, filled with exhibits of naval aviation, also contains a movie theater, snack bar, and gift shop. Climbing up to the flight 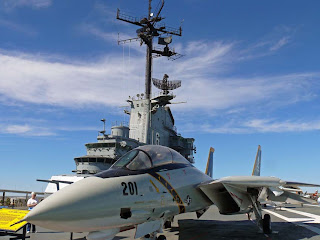 deck, we looked at the assortment of aircraft and climbed up to the bridge - an area much smaller than we expected. If you look close at the exterior picture of the bridge area, y 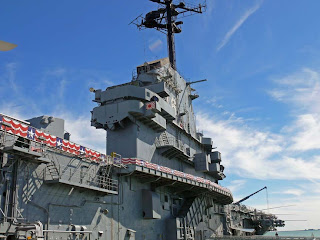 ou'll see a Japanese flag painted there. This marks the spot where a Kamakazie aircraft struck the carrier during the Battle of Leyte Gulf. The most interesting area though, was the tour below the hanger deck into the different areas of the ship. It truly was a floating city, with medical and dental clinics, dining halls, living areas, and corridor after corridor....how did anyone find their way around this maze of watertight doorways, up and down stairs, and mazes of pipes? Thankfully, the tour route was well marked or we'd still be down there somewhere. Overall, this was well worth the trip and we'd recommend stopping by if you're in the area. 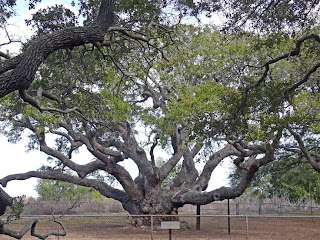 Back at Goose Island State Park, we toured the "Big Tree". This coastal oak is over 1000 years old and reputed to be the largest in Texas. We were impressed with just how "big" the "Big Tree" is. Although for us, after seeing the Sequoias, Redwoods, and huge cottonwood trees of Arizona, this was more of a "sorta big", or maybe a "pretty-big-for-Texas" tree.
We also visited Aransas National Wildlife Refuge, one of the largest and most popular refuges in the country. Unfortunately, the extensive drought has resulted in the ponds and lakes being completely dried up and left the area with very few birds. On the day we visited, the winds were very strong and there were few shorebirds visible, but we still enjoyed our visit. In one of the picnic areas we came across this young Raccoon; he was very friendly and followed us around hoping we had some food. Brenda tossed him a piece of granola bar, after which he gazed lovingly at her and probably would have followed her into the car if she let him. 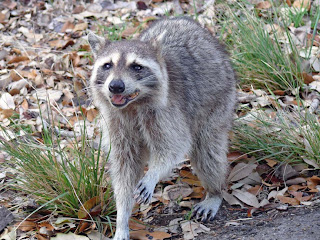 Also in the area was this Nine-banded Armadillo, 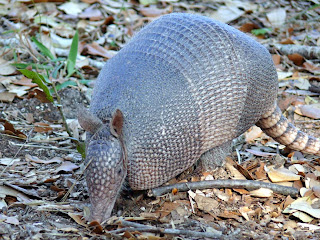 who was oblivious to us as it rooted around for insects. They're interesting to watch as they scurry around, never slowing down or stopping. They're very common in this area and seem to like the mowed areas near roads, which accounts for the high number of Armadillo "speed bumps" that you see on the road. We wrapped up our visit at a stop to watch this Alligator. 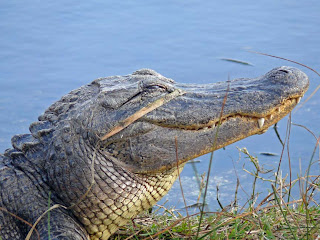 There are a number of them in this area; this one was about eight feet long and enjoying the sun near a pond. They're not exactly fun to watch; aside from opening it's eyes every now and then, it could have just as well been a plastic model (not that I'm goint to get close enough to check).
We've moved on again, this time to a waterfront park in Palacios, another 50 miles up the coast. Stop back & see what we're up to!
Posted by DNPC at 10:13 AM No comments: 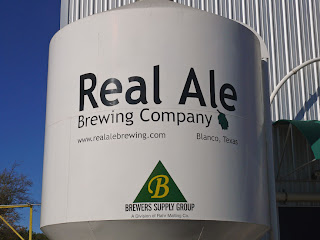 One of the most enjoyable aspects of being full time travelers and explorers is discovering places and things that don't fit the conventional pattern that we're used to. Our visit to the Real Ale Brewery in Blanco was one of those experiences. Having visited the big breweries of Coors and 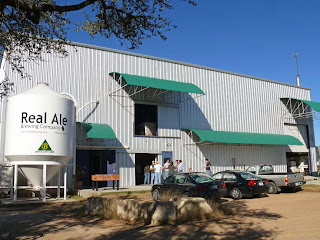 Budweiser, and the small brewery of Shiner, we were interested in seeing the local operation and with our Blanco State Park neighbors Bob and Gladys, headed for the once-weekly Friday tour. Hidden on a side road, the Real Ale Brewery looks more like a warehouse, with it's large doors and metal walls. The first hint of something different was the Foosball table in front, being used by two employees, each with a mug of beer handy. Crowding into the office/tasting room, we enjoyed the samples of their Brewhouse Brown Ale and Pale Ale. Finally, our tour guide addressed the crowd by encouraging everyone to "tank up" with a fresh beer, held up his large mug as a rallying point, and led us into the innards of the brewery. To say that the brewery was a marked contrast to those we'd seen before, especially Shiner, would be a huge understatement. The tour guide seemed to be amusing himself with 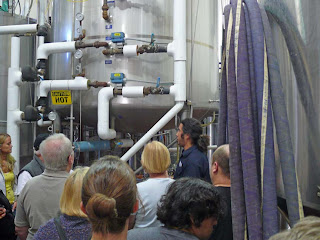 some type of banter - we couldn't hear 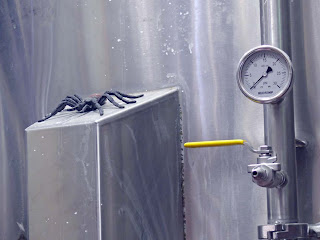 anything because of the loud rock music pounding throughout the facility. Looking closely around during the tour was like a scavenger hunt; there was the plastic (at least I hope it was plastic) tarantula sitting next to a gauge, the water pistol hidden behind spare parts, and everywhere, pieces/parts of brewery stuff and empty bottles. And while at Shiner we watched as floors were scrubbed and sanitized, here the floors were protected by a layer of environmentally friendly Texas dust. 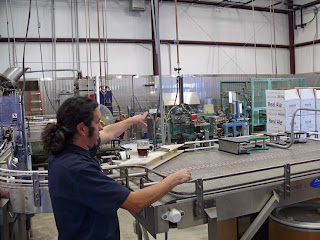 Overall, the interior of the brewery had all of the ambiance of a Chinese restaurant's men's restroom, but hey, all of that alcohol kills the germs, right? The bottom line - they make really good beer, even if they drink a substantial amount before it leaves the place. What else would you expect from a brewery whose web page contains the wisdom of Frank Zappa, who said: "You can't be a real country unless you have a beer and an airline - it helps if you have some kind of a football team, or some nuclear weapons, but at the very least you need a beer."
And we'll be a real country as long as places like this exist.
We're off to the Texas Coast; come back and visit!
Posted by DNPC at 8:23 AM No comments: