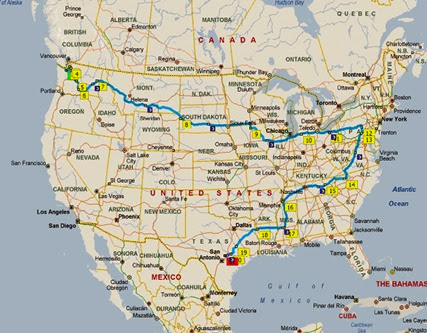 December 12, 2013 marked the completion of our eighth year on the road, a milestone that surprises us – where has the time gone?  2013 was another great year; one that took us across most of the country and once again left us with great experiences and memories.
Our year started in Port Townsend, WA, where we decided to spend the winter volunteering.  We’d lived in the Tacoma area during our Air Force days, and remembered the winters as being mild, so we thought that staying here would be a nice change of pace.  Well, not so much.  What we’d forgotten about was the seemingly endless dreary, damp, and just plain miserably cool days, with an occasional sunny, frigid day.  But it was still worthwhile, as the area was stunningly beautiful on a sunny day, and there were interesting places to visit.  Our volunteer job  at Fort Worden State Park’s Coast Artillery Museum wasn’t one we’d return to, but it gave us the opportunity to immerse ourselves in the area.  On a clear day, the views across Puget Sound were remarkable, with snow-covered Mt Baker in the distance. 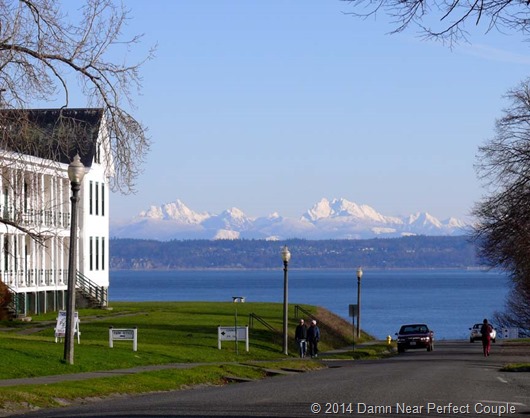 There was so much to see in the area; We drove to Forks to look for the Werewolves and Vampires of the “Twilight” series, but found only a dismal town full of “Twilight” souvenir shops . 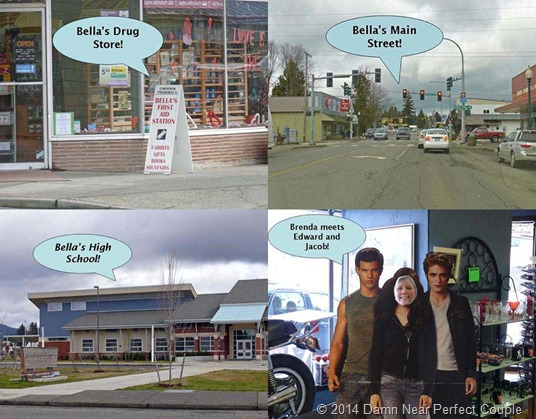 From Forks, we drove past the “treaty line” to the seaside town of La Push and watched the surf crash into the sea stacks and Bald Eagles perched in trees waiting for prey. 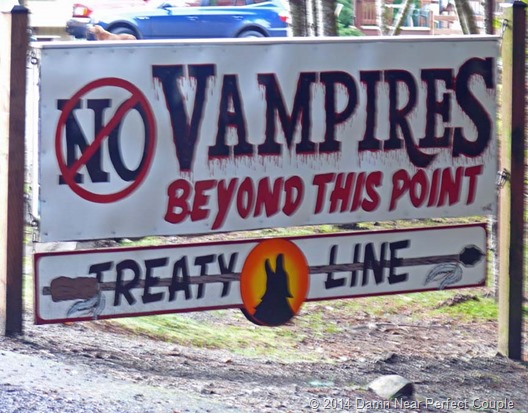 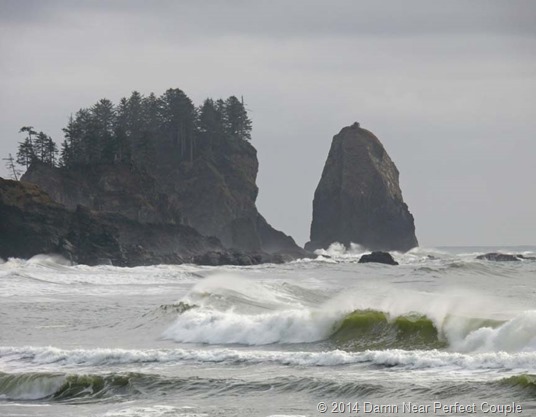 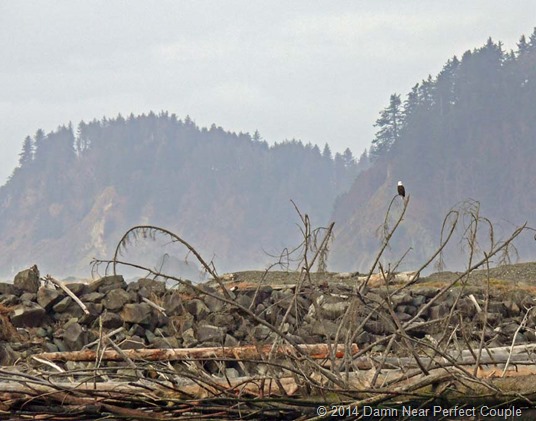 Port Angeles was a good location for day trips to Whidbey Island, Hood Canal, and points east.  From Fort Flagler State Park, we watched as a Trident nuclear submarine was escorted back to it’s home port in Bangor. 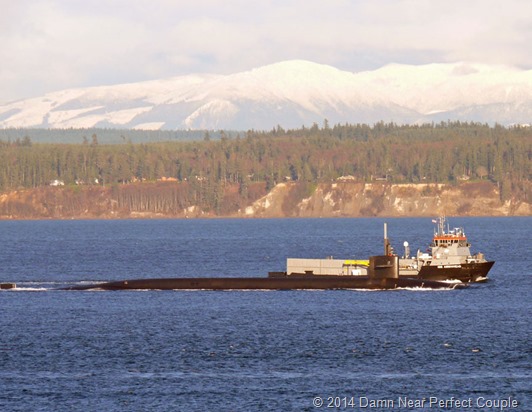 Getting across Hood Canal and Puget Sound could take a day of driving, but the efficient Washington State ferry system made traveling comfortable and affordable – not to mention the great views of the snow-covered mountains! 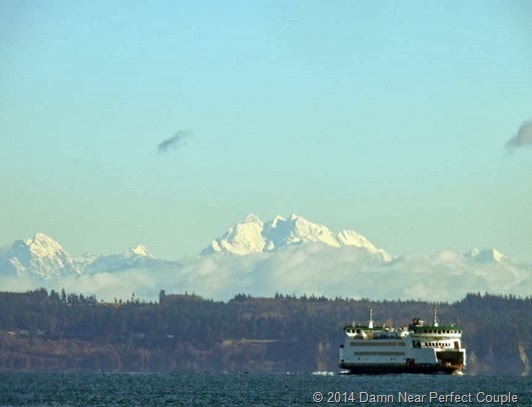 We had a perfect weather day to take a trip to Mt Baker – incredibly blue skies and warm temperatures on a day that followed a week of snow.  The mountain that we admired from a distance became even more amazing up close.  It was a magical day in the snow that we’ll never forget: 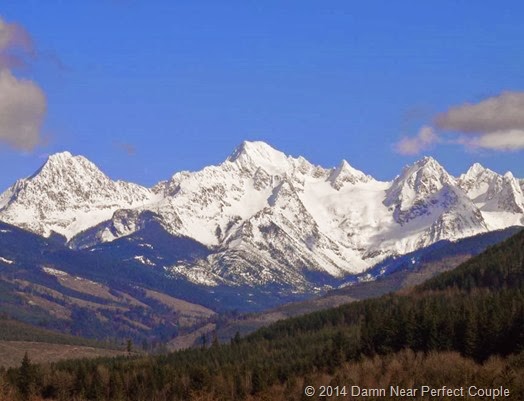 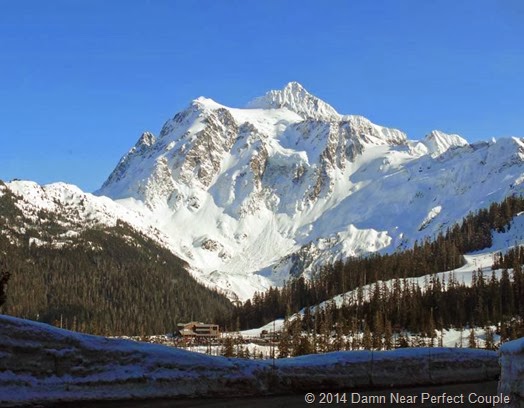 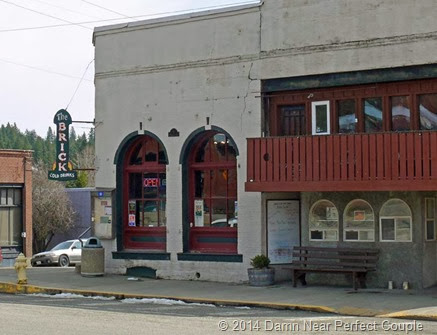 We left the Puget Sound area in March and headed over the Cascade Range to spend some time exploring south-central Washington before heading to Missoula to visit old friends.  We made a stop on the eastern side of the mountains to visit Rosyln, the town used as the setting for Cicily, Alaska in the TV Series “Northern Exposure”.  This was our second visit, and not much has changed from the time that Joel and Maggie walked the streets.  No visit is complete without a bite at “The Brick”, and we enjoyed a burger before heading back on I-90.
Spending a few weeks in Spokane, we visited a the nearby Turnbull National Wildlife Refuge, and Brenda was thrilled when we came across this great-looking young moose: 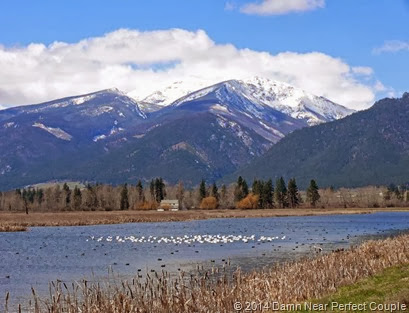 We always enjoy visiting the Bitterroot Valley and our friends at the Lee Metcalf National Wildlife Refuge, where we volunteered in the summers of 2006 and 2008.  The mountains were still snow-covered, and the spring migration had begun with ponds holding flocks of Snow Geese, American Coots, Northern Shovelers, and others.  Driving into the mountains, we crossed beautiful streams on our way to Lake Como with Trapper Peak in the distance. 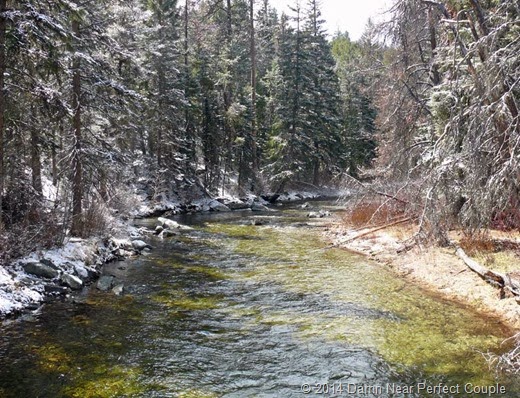 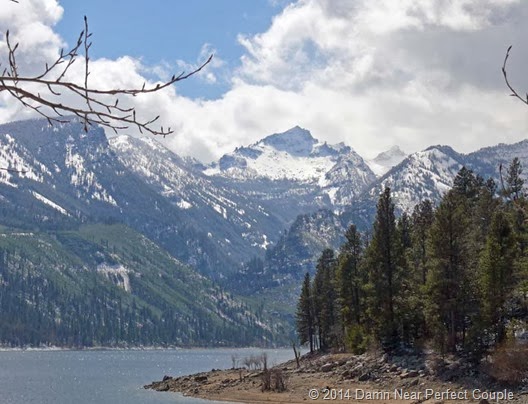 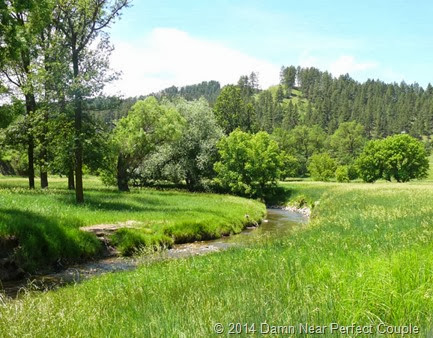 Leaving Montana, we continued our journey on I-90 to Spearfish, SD for our three-months as volunteer tour guides at the D.C. Booth Historic Fish Hatchery. 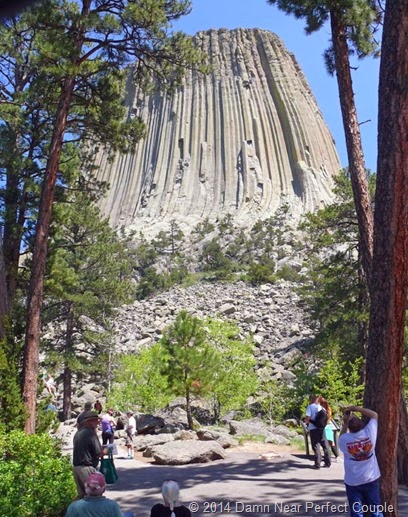 This was our second time here, and so we didn’t feel the need to explore every acre of the Black Hills.  Instead, we took the time to enjoy the weather, the restaurants, and of course, the Casinos of Deadwood.  We also spend time driving the backroads, along with a visit once again to Devil’s Tower and the Badlands. 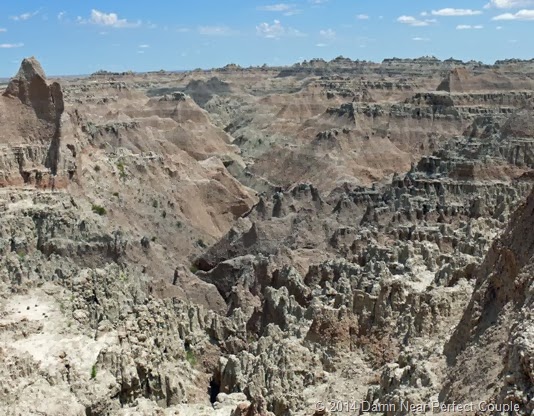 Leaving Spearfish before the pandemonium of the Sturgis Rally, we drove through the Midwest on our journey to Williamsport, PA for the Little League World Series and another item on our bucket list.  After a stop in Northeast Ohio to visit family and friends, we arrived in Williamsport in time for the championship  games.  Truthfully, we were not prepared for what we experienced at Williamsport. 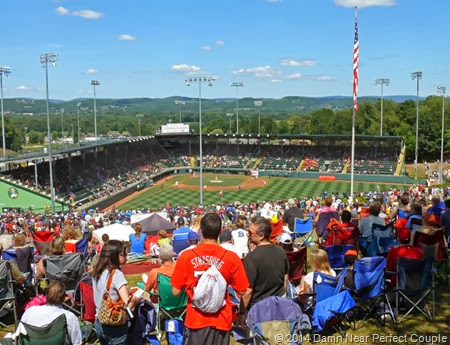 We expected Little League baseball games, but we saw was so much more.  Imagine, hundreds of Little Leaguers from all over the world, brought together and housed on their own campus, with no parents or siblings to get in the way, making friends and learning about each other’s cultures. 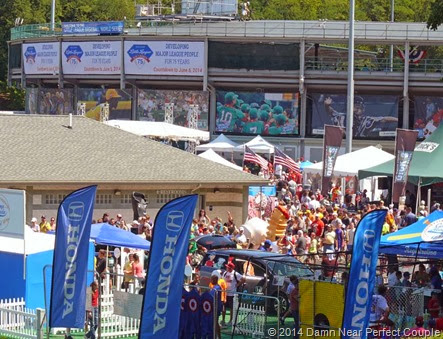 Everywhere we walked in the stadium, museum, and surrounding area and it’s food and game venues, we were struck by the joy of the children.  Kids from Mexico, Japan, Canada, the Caribbean and so many others, all hanging out together, all obviously having the time of their lives.  We’re so glad we had the experience; and by the way, the quality of baseball these kids played was remarkable!
After the World Series, it was time to start our trek to Texas so that Brenda could get her shoulder repaired and have time to recuperate before we started traveling again in the spring.  We traveled down I-81 through the worst truck traffic and delays we’ve ever encountered, then headed across on I-40 before dropping to the south near Shreveport, LA and heading toward our winter area near San Marcos. 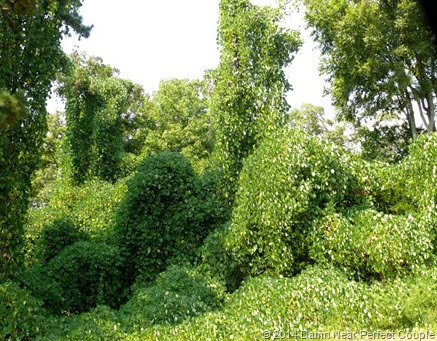 On the way we spent time at a number of great Corps of Engineers campgrounds, while learning about Kudzu and fighting invasive ants everywhere we went. 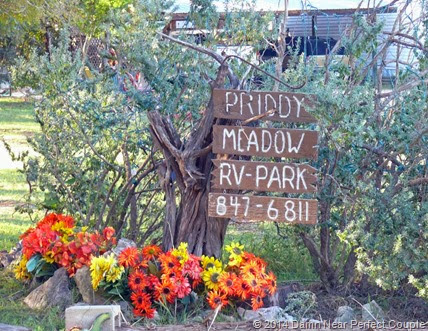 We arrived at our destination in early September, and settled in at a lovely little RV Park outside the village of Wimberley.  It’s a great little town of shops and restaurants, and best of all has a good physical therapy facility for Brenda.  We visited many of our favorite places that we’ve gotten to know in our five winters in the San Antonio area, and during the holiday season we took advantage of the small town celebrations and San Antonio’s Riverwalk. 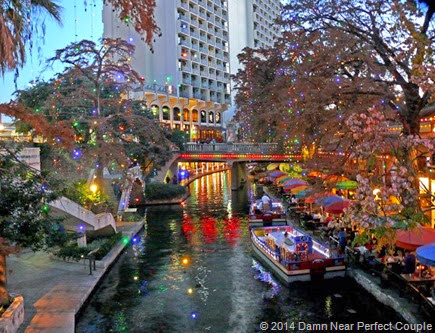 There’s no place like the Riverwalk at Christmas; decorated with lights, luminaries, and boats with choral groups singing carols, it certainly puts you in the holiday spirit.  We also visited some of the small towns for their Christmas parades and light shows.  Blanco, Wimberley, and Johnson City all had parades and visits from Santa, and some of the decorations were magical: 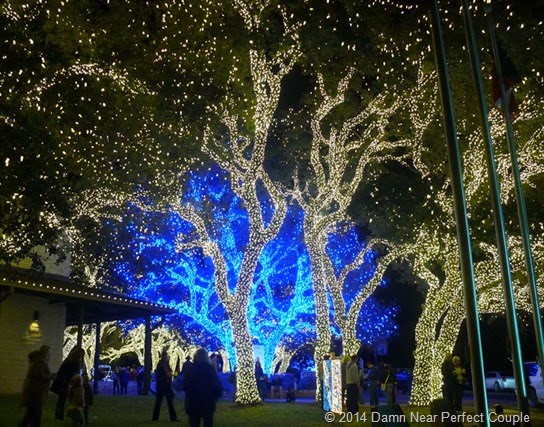 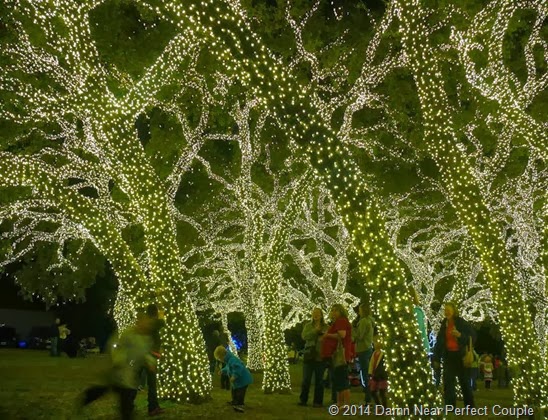 2013 was truly a memorable year for us, and now that Brenda has almost recovered from her shoulder surgery we’re looking forward to year nine on the road.  There won’t be a “best of” this year – so many great experiences that we can’t narrow down our choices.  For now, we’re planning our route back to the Oregon Coast for the summer, catching up on motorhome maintenance, and visiting friends and favorite restaurants.  To all of our old friends from the past and new friends made this year – thanks for the memories!
Posted by DNPC at 3:47 PM 2 comments: