We’re at our summer home in Spearfish, South Dakota, where we’ll be volunteering as interpretive hosts for the D.C. Booth Historic Fish Hatchery.  This is our first time in the area, and we’ve been impressed with the beauty and history of the hatchery and the surrounding area.  We’re parked in the “Volunteer Village” section of the city park across from the hatchery.  Each spacious site is paved, with full hookups, large oak and elm trees, grass, and as a bonus, Spearfish Creek (which is stocked with trout), runs right behind the site.  Spearfish is a great little town, with friendly people, a great library, shopping, and lots of non-chain restaurants.  We’ve been welcomed by everyone we’ve met, and are looking forward to the summer here. 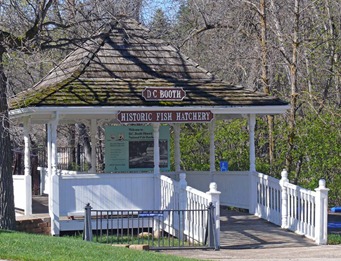 The D.C. Booth Historic Fish Hatchery is no longer a functioning hatchery, but serves as a living fishery museum to educate the public and to preserve fishery archives.  It was a surprise to us that the hatchery, which began operations in 1899, was primary established because the Black Hills had no trout.  It’s hard to believe, driving through the beautiful mountains with all of it’s streams, that no trout were native here.  Today, a walk through the grounds is a history lesson in how fish were raised and distributed throughout the United States.  It’s interesting to realize that without these programs, there would be no trout in the Black Hills, no shad or striped bass in California, and few bass, crappie, or even carp anywhere in the West.   While here, we’ll be telling people about the history of fisheries as we host at the different buildings and exhibits. 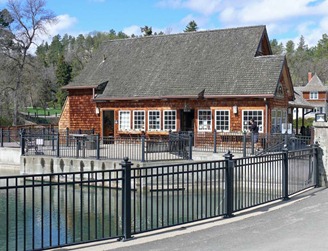 The Visitor Center/Gift Shop is where most of the activity takes place – you can purchase fish food (and corn for the ducks), and feed the huge rainbow and brown trout in the adjacent pond.  An underwater viewing area gives visitors a close up of the fish, 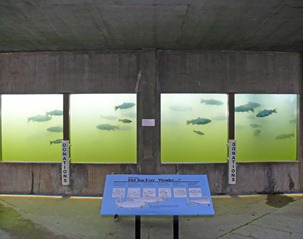 and a continuous video explains how the trout were raised in the early 1900s.  Throwing a handful of fish food into the water results in a spectacular feeding frenzy as the trout rise to the surface; they look more like hungry piranha then trout.  There are also three other ponds with trout to feed, along with raceways filled with smaller fish being raised in cooperation with the state hatchery.  And of course, the ducks.  A resident population of Mallards and a few Wood ducks 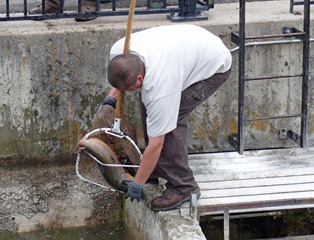 have figured out that this is a good place to get a free meal, and they’ll follow you around hoping for a handful of corn.  We watched as they transferred trout from the smaller ponds to the main pond in front of the visitor center – some were so large that they had to be netted and moved one at a time! 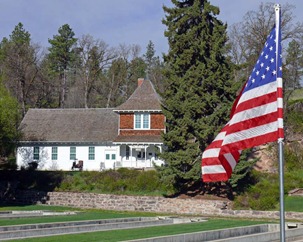 A museum is housed in what was the original hatchery building.  Built in 1899, it also served as the home of D.C. Booth, the first manager, his wife and two children.  The museum holds numerous artifacts from the early days of fishery management to the present. 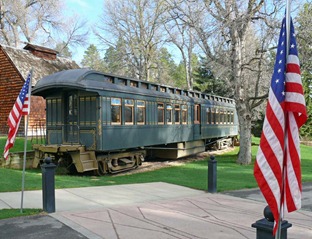 One of the most impressive exhibits is the “Fishcar”, a replica of a railcar used to transport fish across the country from the 1880s to the 1930s.  Originally an 1880s Pullman car, it was rebuilt using a model and photographs to accurately depict Fishcar #3. 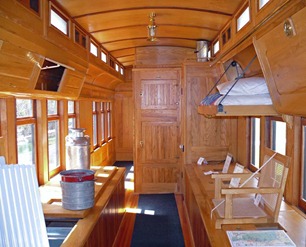 It took over 2000 hours of work by a retired cabinet maker to complete the interior, and the result is an  accurate and beautiful exhibit.  The history of the eleven fishcars is not well known but is interesting – we learned that the first shipment of striped bass from New Jersey to California took place in 1879.  To put that date in perspective, it was only three years after the Battle of the Little Big Horn! 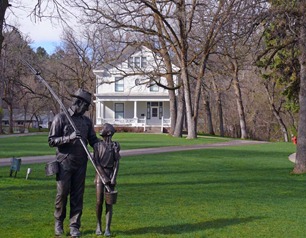 Another place to visit is the Booth House, the original home built for the Booth family by the U.S. Fish Commission in 1905.  The home is beautifully restored and furnished in period furniture.  In back, a flower garden provides a location for weddings and events.
The grounds also have one of the boats used to gather trout eggs from Lake Yellowstone, a “Fisheries Hall of Fame” building, ponds, sculptures, and nature trails.  It’s a popular place for locals and tourists….and it’s free!  We’ll be here, providing tours of the facilities until the end of August, so if you’re in the area, stop in and say hello!
Posted by DNPC at 5:29 PM 4 comments:

Well, It’s Not the Rolling Stone, But

It’s a magazine cover….and it’s MY picture!  And at my age, it’s as close to becoming a Rock Star as I could hope for. 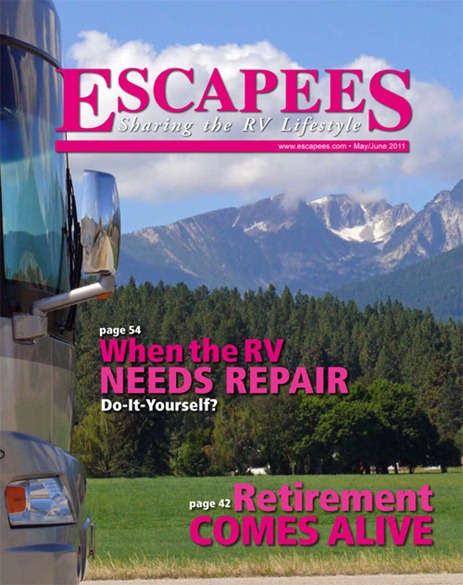 The cover picture was taken a few summers ago on a visit back to the Bitterroot Valley to visit friends we made while volunteering at the Lee Metcalf National Wildlife Refuge.  Descending into the valley from Lost Trail Pass, the road leveled out adjacent to Trapper Peak, a picturesque snow-covered peak in the Bitterroot range.  The green grass, blue sky, and beautiful mountain view begged for a picture, so I pulled over and took this shot.  Here’s the original before cropping: 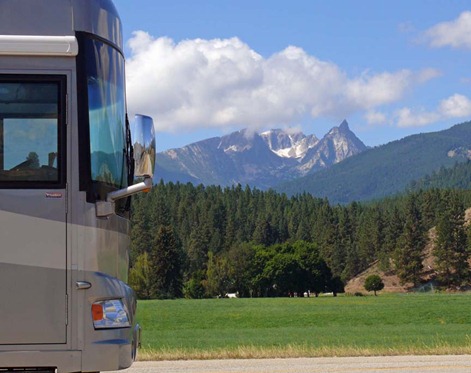 Having a picture published on the Escapees cover is a special treat for us.  Not just because it’s the full-time RVer’s most popular magazine, but because people who identify themselves as “Escapees” are a special group.  We belong to a number of RV clubs;  Family Motor Coach Association, Good Sam, Winnebago/Itasca Travelers – and there are friendly people in all of them.  But we’ve never met an Escapee who wasn’t quick to smile, shake your hand, or share a hug.  There’s a kinship among Escapees uncommon to any other club, perhaps because most of us are full-timers, and happy in our lives.  But there’s more to the Escapees; parks that provide members permanent sites as well as short stays, a great mail service, discounts at campgrounds, and other services.  But the one thing that sets the Escapees Club apart is the Care Center, a facility that answers the question “What happens to full-time RVers when they cannot take care of their own or their spouse's needs following an illness, injury, surgery, or the progression of a long-term health situation?”  Located at the “home” park in Livingston Texas, this amazing facility provides an amazing level of care at a price well below any assisted living facility, largely because of fellow Escapees who volunteer to help.  For so many who are faced with no longer being able to travel but who want to remain within the RV community, CARE provides the answer.  It’s worth being a member just to be able to support this great facility.  You can learn more about the CARE Center here.
We’ve arrived at our summer home, the D.C. Booth Historic Fish Hatchery, where we’ll be volunteering as interpretive hosts.  The US Fish & Wildlife, which manages the hatchery, provides volunteers with ten RV sites in Spearfish City Park, a beautiful park right across from the entrance.  Each site is paved, with full hookups, shade trees, grass, and Spearfish Creek, which runs behind the sites, is stocked with trout.  It’s promising to be a great summer, although the weather on our arrival was juuust a bit cool and wet. 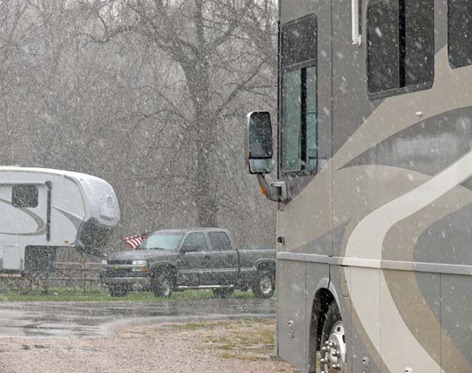 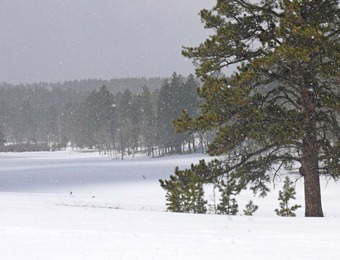 A Drive into the Black Hills above Spearfish took us from a spring snowstorm into a winter wonderland.  This is May?  At least the road signs are marked for the preferred mode of transportation when it’s snowing! 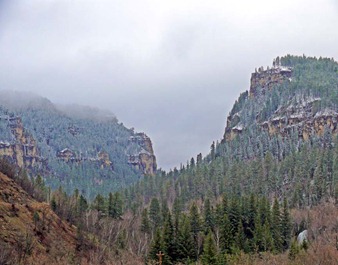 The drive through Spearfish Canyon is breathtaking; lots of curves, tall pines, sandstone cliffs, and a roaring stream.  We’re looking forward to spending more time exploring here, so stop back and see what we’ve been up to! 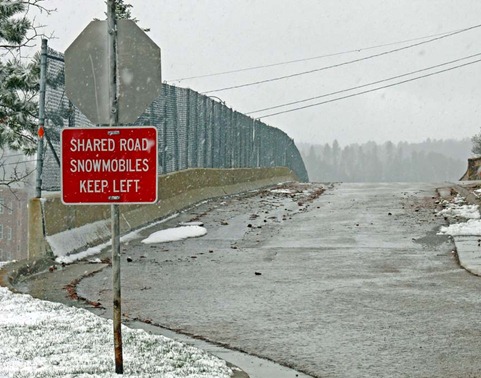