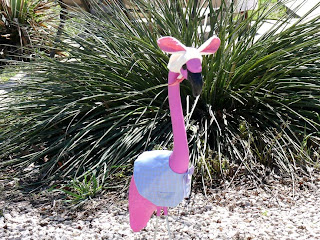 Sometimes our lifestyle has days when it seems almost illegal. As I type this, I'm sitting under a tree on a sunny, 75-degree day, with birds chirping, and of course, the Easter Flamingo grazing close by. We're spending nine days at beautiful Blanco State Park, about 40 miles north of San Antonio. It sits on the Blanco River, just outside of the town of the same name, which here in Texas is pronounced "blank-oh", as in Pee-can (Pecan), and See-ment (Cement). It's a wonderful park for RVs; there's a large circle with ten full hookup, 50-Amp sites, all under the trees with firepits and 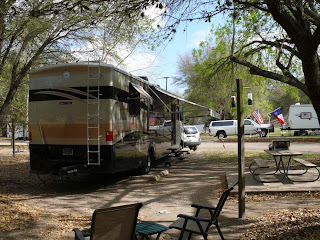 picnic tables. The rates are reasonable, but Texas is a bit quirky....the fee for a site doesn't include the park entrance fee. 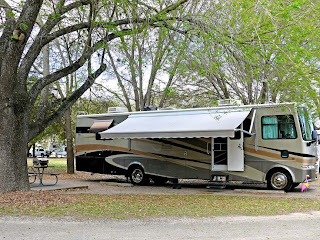 Here, the daily RV site fee is $20 a day, but the entrance fee is an additional $3 per person per day. To avoid the daily entrance fee, it's wise to purchase an annual Texas State Park pass, which for $60 is good for 12 months from the date of purchase and gives free access to all state parks and historical sites. We're not complaining; Texas state parks are among the best in the nation and we hope to spend more time in them next year. This park is one of the best, and this weekend 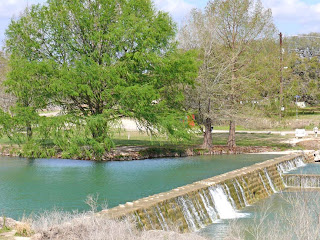 reflected the popularity by being crowded but still well managed. The park has it's own law enforcement people, and in Texas all the parks have a sign that states "public consumption of alcohol prohibited", so the drunks pretty much stay inside their RVs, or at least drink from disguised containers. Another perk here is that no fishing license is required as long as you are on State Park property, so I'll be able to try my hand at catching fish that Brenda will neither clean or eat (unless it's a bass, which is unlikely). We're just down the road from all of the Lyndon Johnson historic sites, and we plan on visiting them later this week. 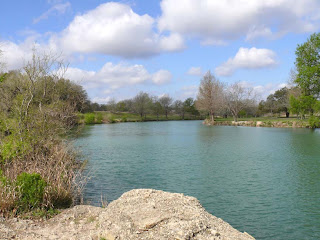 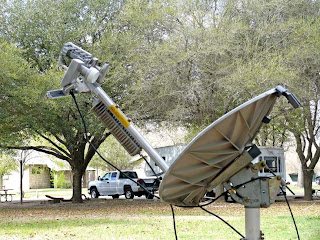 This is the first time we've used it and I'm happy - I'll get to see the rest of March Madness (in between the Contessa, Paula, and Alton). I really need to buy a second satellite receiver. Well, sitting out here under the trees has been pretty grueling, time to head in and take a nap. We hope you all had a fulfilling Easter holiday and that it's warming up wherever you are!
Posted by DNPC at 12:39 PM No comments:

Goliad & The Battle of Coleto 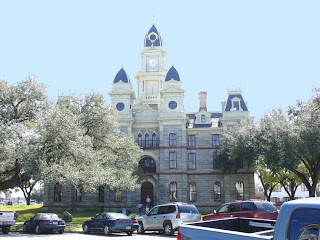 Goliad, a small town 90 miles southeast of San Antonio has a huge place in Texas history, pretty much for bad things. Visiting it today, it's a typical farm community with a partially restored town square, courthouse surrounded by large trees, and antique and craft shops. The second most notable event in Goliad occurred in May, 1902 when a large tornado, estimated by today's scale to be an F5, cut through the center of town destroying over 200 buildings, killing 114, and injuring 250. The tornado event is tied for the worst ever in Texas and the country's 10th all time deadliest to ever occur in the U.S. The stories of the death and destruction, the need for a mass burial, and how residents coped with the disaster in 1902 is interesting reading and can be found here and here. We also visited the Mission Espiritu Santo, a reconstructed mission at Goliad State Park 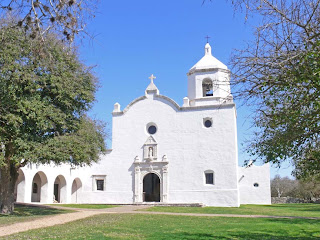 that oversaw the largest ranching operation in the Texas 1800's. Completed in the 1930s by the Civilian Conservation Corps, the beautiful chapel and museum were worth the side trip.
Goliad is most famous, of course, for the massacre of Colonel James Fannin and his men during the Texas revolution. Strange, isn't it, that the success of the Texas revolution depended on failed military actions? First, the Alamo, where a group of petty criminals, failed politicians, and adventurers were surprised by the unexpected arrival of Santa Ana's army and killed, then Goliad, where Colonel Fannin and his men, expecting to reinforce the Alamo, were ordered to retreat by the new Texian Government, caught by Mexican troops in the open, captured, and executed. Our visit began at Presidio La Bahia (the fort on the bay), a remarkably restored fort and chapel constructed in 1749 to provide defense of the coastal area and east Texas. 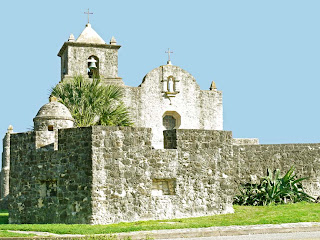 The Presidio was occupied and used by Mexican military forces for many years until captured in 1835 and renamed "Fort Defiance" by Colonel Fannin, who promptly raised the 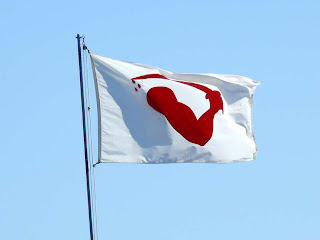 "bloody arm" flag (they'd rather cut off their right arm then live under Mexican rule). Just a few weeks after the fall of the Alamo, Fannin decided to hold the fort in spite of the knowledge that a large force of Mexican infantry and calvary were approaching. Finally getting the message to abandon the fort, he delayed his retreat, then managed to take a route that left him on the low ground, in tall grass, and eventually surrounded by the Mexican forces. After a day-long fight known as the Battle of Coleto, they surrendered and were promised by their captor, General Urrea that they would be held and released later. Santa Ana, however, ordered that Fannin's men be executed. On Palm Sunday, March 26, 1836, Fannin's men were marched in three columns from the fort and shot or bayoneted to death. Of the approximately 407 men held, 342 were killed, 28 escaped during the shootings, and the rest (doctors, blacksmiths, and artisans) were spared since they were useful to the Mexicans. The bodies were burned and the remains left in the open until June 3rd, when returning military forces gathered and placed them in a mass grave. The Goliad Massacre became, along with the Alamo, a rallying cry for Texas independence, and there's a valid historical argument that had the Texans not blundered into these massacres, or had Santa Anna not been as merciless, 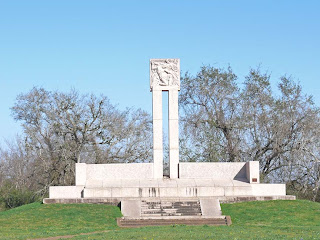 the United States would not have supported the Texas revolution. It's still an amazement that after his defeat and capture at San Jacinto, Santa Ana was released and allowed to return to Mexico. Despite all the misery he caused, he continued to be a force in Mexican politics until he died in 1876 at age 82.
A short drive from the Presidio takes you to the gravesite of Fannin and his men, a large granite structure build in 1938. The stories of the Alamo and Goliad are tragic examples of miscalculation and what can happen when you underestimate the enemy's capabilities. After learning about all this, I think I'll stick with the John Wayne movie; it's not so depressing.
On a lighter note, those of you from northern Ohio will remember all of those important lessons of your youth, phrases like "don't go out without your galoshes", "don't forget your babushka", and of course, "nothing shows class like a Pink Flamingo!". Well, although we're long gone from the area, we've always searched for just the right lawn ornament and thanks to the internet, I was happy to present to an amazed, stunned, and deliriously happy wife a Pink Flamingo lawn ornament! But not just any Pink 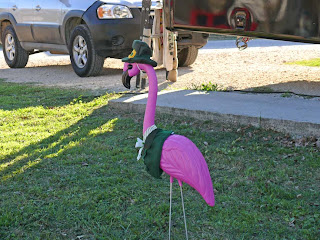 Flamingo (PF); this one has outfits for every holiday! 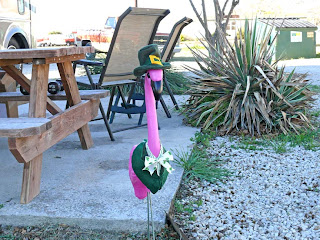 From the bunny ears to the Santa suit, our PF is prepared to exhibit class and sophistication no matter what the season! Since this month we celebrate Saint Patrick's day, our PF is dressed in it's Irish finery, complete with vest and hat. We sit here each evening now, basking in the glow of our neighbor's envy, waiting impatiently for the next holiday and costume change. Come back and see the Easter Flamingo!
Posted by DNPC at 6:15 PM No comments: