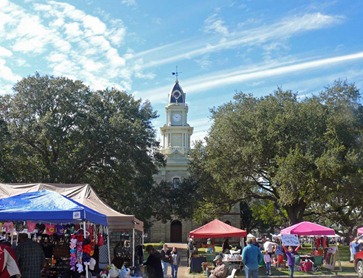 We decided a trip inland from the coast was in order, and so we headed for Goliad and their Saturday Market, held in the charming town square.  It was a beautiful, warm day, and the market was crowded with folks browsing the booths. 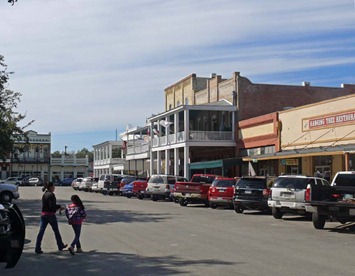 There were a few fruit and vegetable items, but this time of year, most of the treasures on display were crafts, jams, candles, and the other usual must-have items.  Goliad is a pretty little town, with a picturesque city hall and restored old-time store fronts.  We spent an hour or two browsing the market, then headed down the road a bit to the Presidio La Bahia (the fort on the bay), a restored fort and chapel first built here in 1749. 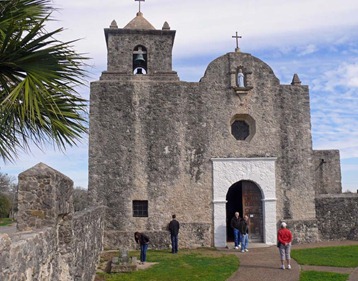 The original La Bahia was built 30 miles east, on Matagora Bay (hence the “bay” part, since it’s now inland and on a river), but troubles with the Karankawa Indians forced it to be relocated.  It has an interesting history; soldiers from Presidio La Bahia assisted the Spanish army in fighting the British along the Gulf Coast during the American Revolution, and  the only location west of the Mississippi to have participated, and it is the oldest standing fort in the west. 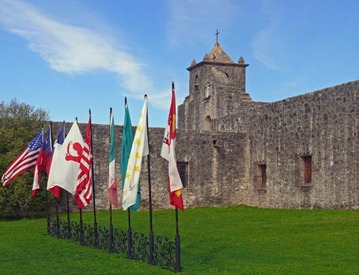 It is also the site of the Battle of Coleto Creek, also known as the Fannin Massacre.  It’s an incredible story of military incompetence and cruelty that led to the execution of 342 American prisoners by the Mexican General Antonio Lopez de Santa Ana shortly after the fall of the Alamo.  What’s even more amazing is that after killing everyone at the Alamo and ordering the execution of the Goliad prisoners, Santa Ana was captured by the Texas army at San Jacinto……..and released in return for his signing a document proclaiming Texas independence from Mexico.  Except that he was no longer in charge and the Mexican government voided the agreement.  He later returned to Mexico, and became president  a number of times, once again fighting the United States in 1846 before being permanently ousted.  So, where did he move to – why New York City in 1869!  Amazingly, Santa Ana was able to return to Mexico and died of old age at 82.
On a lighter note, we’ve been making our last visits to the shore and ponds to watch the waterfowl and shorebirds.  Spring is in the air, and each time we visit our favorite duck pond, the colors of the males become brighter as they prepare for mating season.  This Green-winged Teal is already in his magnificent colors: 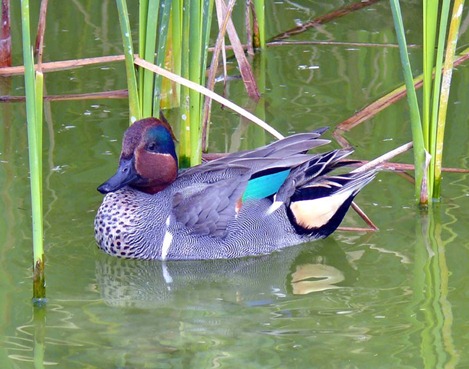 The area still has plenty of shorebirds to watch - every shallow water area has herons, egrets, and sandpipers, and we watched this Snowy Egret stalk his prey through the reeds: 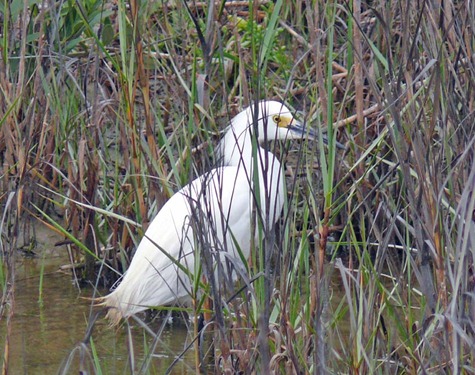 One of our favorite birds to watch is the Black Skimmer.  They’re so awkward looking, almost clownish with their bad haircut that looks like it’s covering their eyes.  They hang out together with a few Terns and Gulls in the same spot every day, and unlike most birds, when they sleep, they really stretch out and relax. 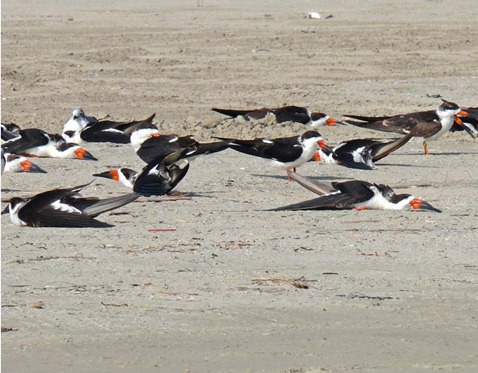 The beach is beginning to get crowded as the water warms and the days are sunny.  At Port Aransas beach, there’s so much to see – people fishing, ships coming and going, and kids playing in the surf.  It’s hard to believe that folks up north are still coping with cold weather and snow! 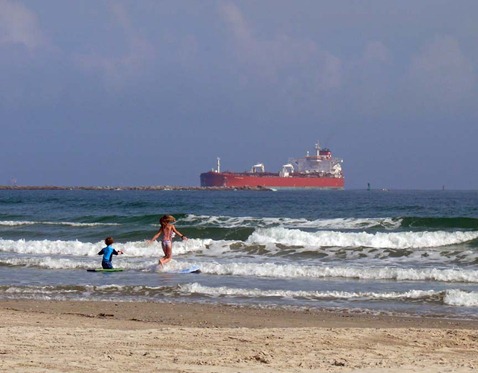 We’ll be leaving here soon and heading for a new place, so stay with us, who knows what we’ll see next?
Posted by DNPC at 3:05 PM 4 comments: