On the Beach at San Onofre 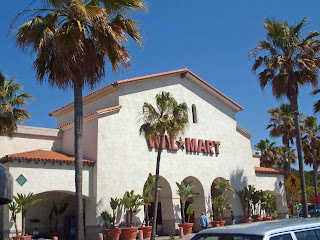 We're set up on Camp Pendleton's San Onofre Beach Club, a nice RV park and recreation area right on the ocean. Ah, Southern California - sunshine, traffic, beaches, traffic, upscale shopping, and of course, traffic. Everything here looks like Disneyland; trimmed lawns, flowers, palm trees - even the Wal-Mart is upscale. I was disappointed; however, that it didn't have valet parking. 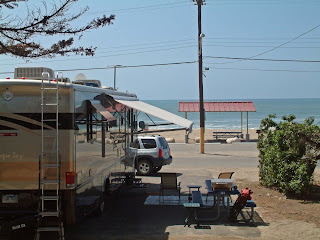 Our site is large, separated on both sides by bushes, and is less than 100 yards from the ocean. The view from the windshield is pretty awesome, and the sound of the surf pounding the sand is a great way to begin a night's sleep - or the afternoon nap. 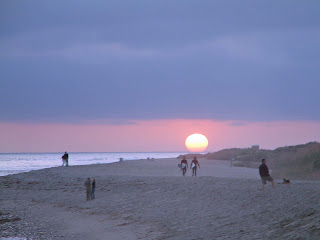 It's been cooler than we thought it would be; the days have been sunny but only in the mid to high 60s, and the nights are cool and in the 50s. Camp Pendleton, a Marine base, is huge; over 125,000 acres of prime real estate right along the coast, between San Clemente and Oceanside. We're on the northern edge, which has a small commissary, exchange, and gas station ($3.31/gal today). A drive of 27 miles through the base gets you to the southern end of the base with the major services; once again the size is stunning - from the "big" commissary to the BX is 11 miles. We're treated to the sounds of freedom daily as artillery booms in the distance, helicopters fly overhead, and amphibious assault ships maneuver in the distance. The only drawback to the park is the traffic and noise; lots of beach parties and loud music as the young Marines enjoy the weekend. 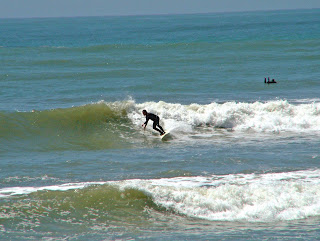 The beach is one of the most popular surfing areas around, and there's a constant stream of wetsuit-clad surfers going back and forth on their way to the prime surfing spots. We've enjoyed watching dolphins swim just off the beach, and Brandt's Cormorant and Brown Pelican are numerous. 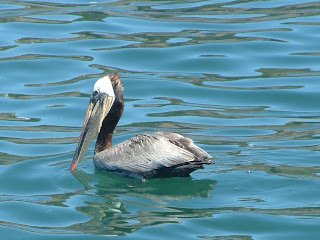 The other drawback of the area is the misery of trying to get anywhere on the constantly crowded highways. We're right off of I-5 ("the five" as it's referred to by locals), and it's as bad as the Washington Beltway, always crowded, no matter what time of day. Last week we visited the nearest harbor, Dana Point, a beautiful area of shops and restaurants. There, we took a "whale watching" cruise for two hours out into the ocean. We had a great time; right after 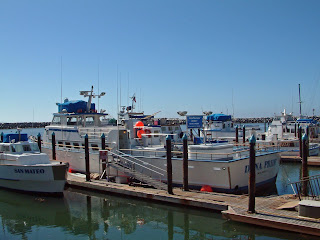 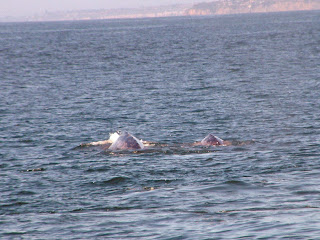 followed them for about an hour. The weather was perfect and the sea calm; it was a great trip and as a bonus we managed to stumble into "two for one" day, so the experience only cost us $25.00. If you're in the area, I'd recommend the Dana Wharf whale watching tour; cheap entertainment for this area. We've been busy getting ready for our daughter Kim's wedding, so we haven't had as much time to explore the area as we'd like, but we were able to spend some time with our good friends Mike and Sherry Rager, who we got to know when we were stationed at Castle AFB in Merced back in the early 90's. Mike's in charge of the air traffic control operation here on the base and Sherry keeps busy as a Financial Advisor; they're great folks and we enjoyed visiting their home in Temecula (a beautiful town). I'll close with a sign just past the entry gate where Marines coming back from Iraq pass; it says "Lance Corporal Ryan Baker, My Husband, Her Daddy, Our Hero!" Welcome back, Corporal Baker.......! 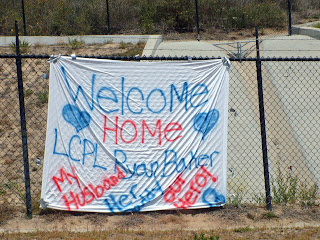 We'll be busy each day now getting ready for next week's big event - come back and visit & we'll tell you the news!
Posted by DNPC at 1:15 PM No comments: 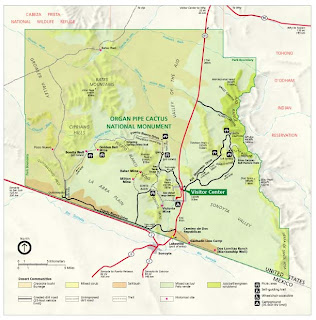 Rather than take the interstate system from Benson to Southern California, we decided to take the back roads as much as possible. Once we hit Tucson, we headed west on highway 86 and then north on highway 85 through some of the least-populated areas of Arizona. Our trip took us through the towns of Sells, Why, and Ajo (Ah-ho), before we ended up at the Air Force Famcamp at Gila Bend AFS. Just south of the metropolis of Gila Bend, the small installation serves as an emergency landing field for aircraft using the Barry Goldwater bomb range and also provides a location for military aircraft to conduct low approaches for proficiency. There's not much to the base, but the Famcamp provides electric/water/sewer hookups and a free laundry for only $7 a night. We spent two nights here and used it as our base to travel south and visit the Organ Pipe National Monument. Organ Pipe is one of those little-known destinations that surprises you with its beauty when you see it. Although desert, the landscape is lush with ocotillo, Cholla, 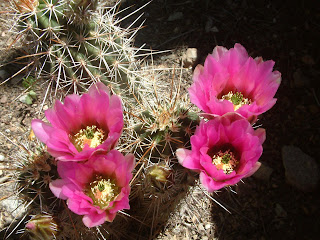 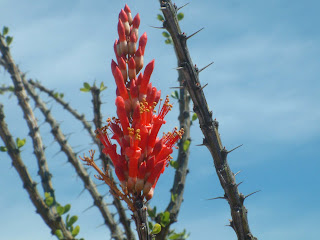 Sahuaro, and Organ Pipe cactus, Palo Verde, and Mesquite Trees, and Mexican gold poppies. We took the 20 mile drive through the park and on the way stopped for a picnic lunch. 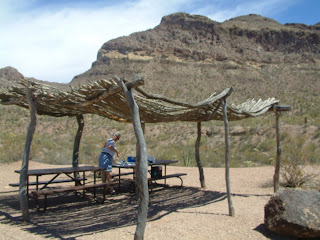 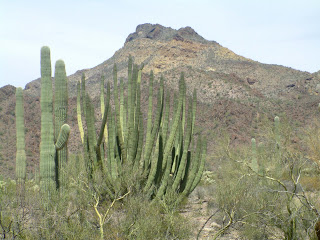 scenery was marvelous, and the day was perfect; 75 degrees and sunny. Along the road we found this rare crested (or crestate) 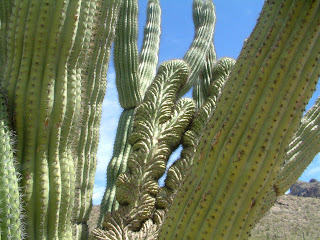 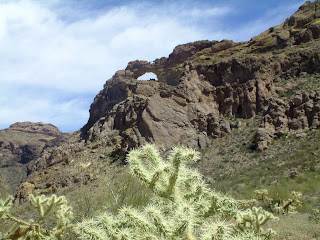 pipe; this unusual variation is also found on the giant Sahuaro cactus. We would liked to have spent more time here; the monument has miles and miles of roads through the desert, but we were on a schedule and had to leave for Yuma the next day. The monument has a large volunteer staff and a nice RV villiage; we may consider spending the winter here some day. From Gila Bend we traveled to Yuma to spend a few days before moving on to California. We won't have a posting on Yuma; frankly we didn't find much there that was interesting, although it must be popular with RV'rs during the winter since the population swells from 85,000 in the summer to 170,000 in the winter. We'll be on the beach for the next month; check in and see how we're doing!
Posted by DNPC at 2:08 PM No comments:

Finally, the weather has warmed and the mountain and back roads are dry enough to get out and explore. We loaded up the Tribute and headed north from Wilcox on dirt roads for 56 miles of dirt road to the ghost town of Klondyke. The trip took us through rolling ranchland and a followed a dry river bed with a few trees, but otherwise was pretty drab. The "town" has a few small ranches and a combination general store and post office - and it's For Sale! If you ever wanted to own your own town, be the mayor/sheriff/fire chief.....now's your chance. Just make sure you bring your own water.
One of our favorite places that we were anxious to get back to is the Chiricuahua Mountains. We packed a picnic lunch, and with our friends Bob and Trixie, spent the day showing them the sights. We first toured the monument area, with it's views of the fantastic rock formations and our favorite, Cochise Head. It never fails to amaze us how much the rock formation looks like an Indian chief, complete with headset. Look close and you'll see that a tree forms an eyelash! 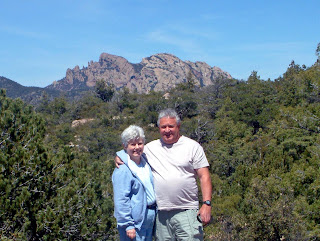 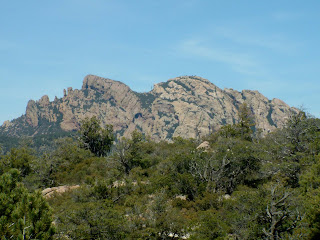 The towering rock formations seem like they'll topple in the slightest breeze; one slender spike is over 135 feet tall but only 3 feet in diameter at the bottom! Others balance on small bases; everywhere you look the scenery is breathtaking. 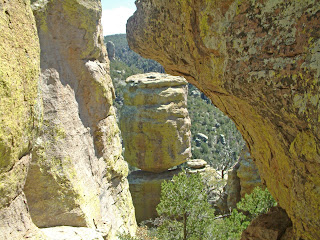 Later, we stopped to visit Faraway Ranch, a restored ranch built in 1887 and operated by the same family until 1978 when it became the property of the Park Service. 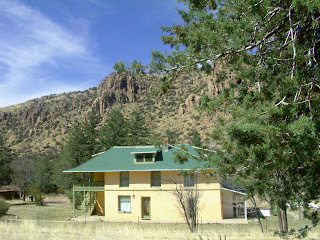 Visiting it is a fascinating look into life on a working ranch in the REAL west, miles from the nearest town and in an area where Cochise and Geronimo roamed. It's a beautiful setting and well worth the side trip. We finished the day with a trip over the mountains to Pinery Canyon for a picnic lunch. 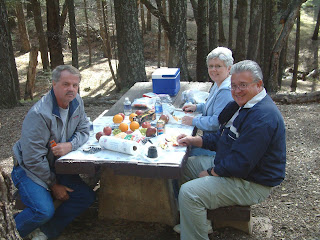 Although a bit cool, the wind in the trees and the smell of Ponderosa pine made for a fitting end to a great day. To add to the end of a great trip, on the way out of the mountains we came across a coatimundi meandering across the road and spied another watching us from behind a rock fall. We leave this great area tomorrow and start heading west for California and our daughter's wedding, but will take with us the memories of another stay in southern Arizona. Thanks for tuning in!
Posted by DNPC at 6:02 PM No comments: