It’s cold and miserable here on the river, and we haven’t felt much like exploring new areas.  So instead, we sit and go through our picture library and remember where we were and what we were doing when they were taken.  Here’s some of our favorites: 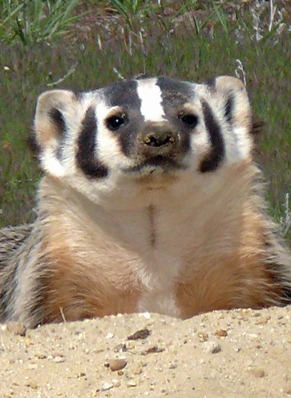 We’d never seen a badger in the wild until our first volunteer tour at Lee Metcalf National Wildlife Refuge in Montana.  Reclusive, wary, and intelligent, most people never see one, but we were fortunate enough to see “Betty” as she became known, throughout our two summers at the refuge.  She became fairly acclimated to people, allowing us to approach within camera range, and during our auto tours we’d stop at her den and many times she’s make an appearance as if to say hello.  She was the matriarch of the population, each year producing a litter of two or even three cubs.  One of our fondest memories is the day that Betty brought out her three cubs, as if to show them off to us.  We watched as they played, explored, dug, and did all of the things that baby animals do, while Betty sat on a nearby mound of dirt and watched us as we watched them.  It wasn’t unusual to see Betty trotting towards her den, another Columbian Ground Squirrel in her mouth for her cubs.  The refuge supported a number of badgers, since the ground squirrels were everywhere and provided a great food source.  Badgers seldom live more than ten years in the wild, but we hope Beautiful Betty’s around for a long while. 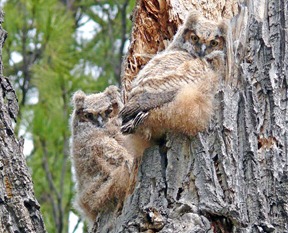 Spending an entire summer at a wildlife refuge gave us the opportunity to watch as babies grew to adulthood.  On a walk during the spring, I came across these two baby Great-horned owls and sat for an hour watching them as they stared at me, wondering just what kind of food source I might be. 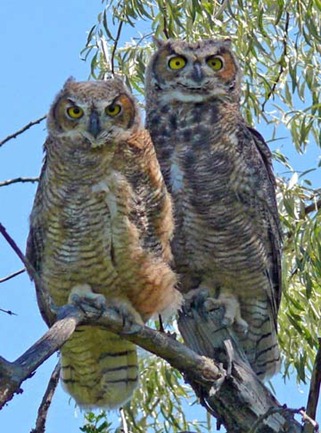 Months later, I saw them sitting together in a tree across a field from our RV.  I walked toward them, took a picture, walked a little closer, took another picture, and so on, waiting for them to fly off.  But perhaps they remembered me, because they stayed on their perch until I was close enough to get this image.  You can tell by the plumage that the one on the left was the younger of the two, and as I got closer, it would twist it’s head up and look at it’s older sibling as if to say “are we OK here?  Should we fly off?”.  Owls are amazing raptors, voracious and effective in reducing the rodent population, although they’ll eat anything they can – even a skunk! 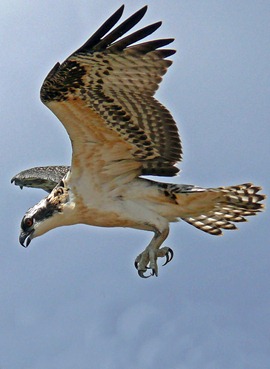 Watching an Osprey snatch a fish out of the water is a study in acrobatics and ballet – but they’re not born with the ability, they have to learn.  We watched as Osprey chicks were hatched, struggled to learn to fly, as in this picture, and then received lessons from thier parents on how to fish.  It was hysterical to watch, as a chick would hit the water and skip like a flat rock, or worse, disappear completely and reappear confused and shaking it’s head.  But the most memorable moment is the first few days when Osprey chicks throughout the refuge fledged and flew together – to see 10 or more young Osprey soaring together, peeping at one anther, as if to say “look what I can do!”, is an experience we’ll never forget. 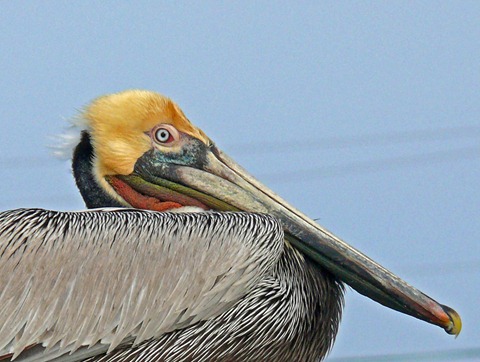 The Texas coast is home for thousands of Brown Pelicans, and I couldn’t resist this image of one in his colorful plumage, fresh from a dip in the water.  They’re comical to watch, but at the same time sort of arrogant as they seem look down their noses at everything.  This image reminds us of all the shorebirds we’ve seen on the coast, many of which are strikingly beautiful, but few with as much character as this guy. 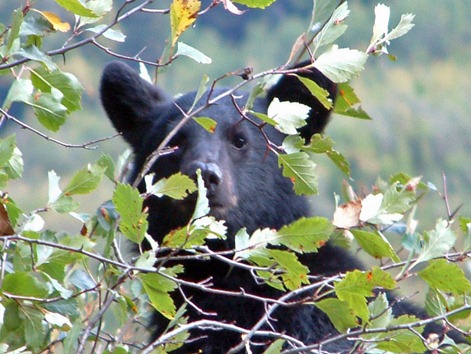 The above image was taken on our visit to to Glacier National Park.  For us, Glacier rivals Yosemite in it’s monumental scope and beauty, and in some respects is even more magnificent.  We were standing along the road looking at where an avalanche had changed the look of a mountainside, when we heard a crashing coming at us through the brush.  Suddenly, right in front of us, two young bears, one of them this small cub, burst into the open and climbed a tree looking for berries.  After a few moments of berry-eating, the cub suddenly realized we were there, froze, and stared at us trying to figure out just what we were.  Apparently he decided we were harmless and soon went back to stripping berries from the tree.  What a magical moment this was!  Brenda, of course, wanted to take him home. 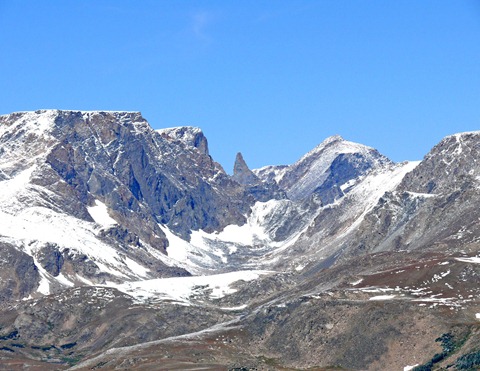 Charles Kuralt called the Beartooth Highway “The Most Beautiful Drive in America”, and we’d certainly agree.  As we left Yellowstone NP and drove up the winding road, we were stunned at each turn by the vistas of blue lakes, green forests, and snow-covered granite peaks.  At the top, nearly 11,000 feet up, the “Beartooth” was visible in the distance.  If you can only see a few places in your travels, put the Beartooth All-American Highway at the top of your list – it is undoubtedly the most memorable trip you’ll make in a vehicle.  But don’t try it in your RV! 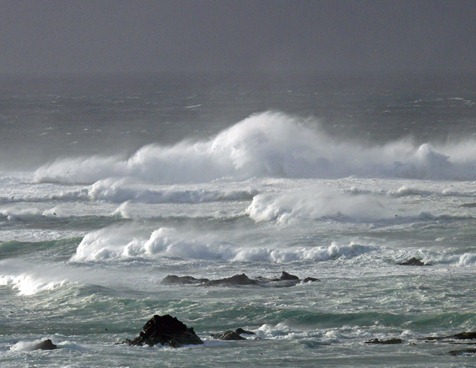 While traveling through the Southern Oregon coast in November, we experienced one of those “wow” moments when a storm drove from the Northwest out of the Bering Sea,  while the wind howled from the Southeast, blowing against the30-foot waves and creating a spectacular show.  The noise was deafening – wind screaming, waves crashing, and in the middle of it all, gulls screaming and even a few seals barking.  What a show it was, and what a memory it gave us.  By the way, can you see the woman’s face in the wave?  Spooky! 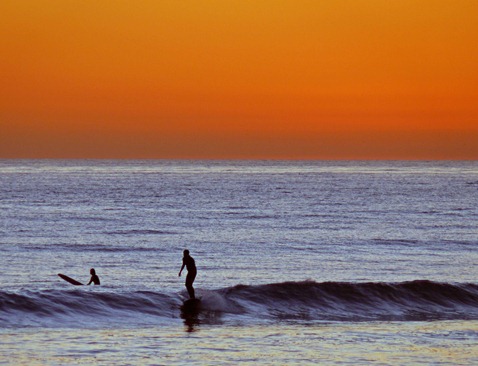 Our daughter and her husband live in Orange County, California, and when we visit, we park at Camp Pendleton’s family campground, right on the beach near San Clemente.  It’s a great location, where you can pull forward on the sand until you’re just feet from the surf line.  One evening, the sun turned the sky orange just before sunset and I was able to capture this image.  To us, it portrays the beach we remember in all of the old “Beach Party” movies, although we never did see Annette Funicello or Frankie Avalon during our stay. 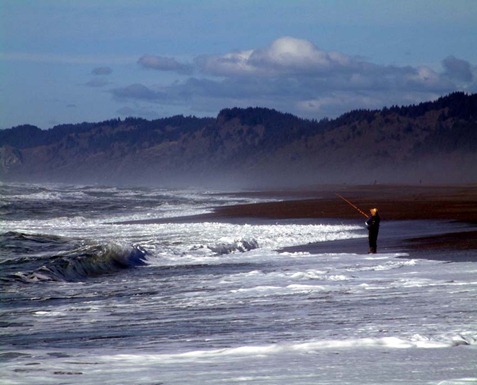 Finally, while walking the beach near Klamath, California, we came upon this surf fisherman.  We like this image because it was taken in our first few months of full-timing, and it reminds us how lucky we are to travel at will and experience scenes like this.  Looking at this image, we can hear once again the crashing sound of the surf, the hissing of the water rushing across the sand, and the cry of gulls.

That’s it for this visit – we hope that you, too have a library of images that can bring back the memories of happy times!  We’ll be hitting the road again soon, so check back and see what we’re doing!