When a Humbug is a Good Thing

We’re back at Humbug Mountain State Park for another summer as Interpretive Hosts, teaching the “Junior Rangers” and teaching campers about Seals and Sea Lions at an evening program.  The term “interpretive host”, used by most federal and state agencies confuses many people – it’s supposed to convey to people that we interpret nature in an understanding and hopefully entertaining manner.  But we once had a lady stop by and ask us to translate Spanish into English…….and then got a bit huffy when we explained that we weren’t THAT kind of interpreter.
So five days a week we have a one-hour or so class in which we teach the 6-12 year-old “Junior Rangers” about nature.  Birds, invertebrates, seals ,whales,  bears, and even salamanders are some of the subjects we teach, and follow up with some time of craft that reinforces the lesson. After their first class, the kid’s get their Junior Ranger badge and are taught the highly coveted, secret “sign” to share only with other Junior Rangers or the park rangers.  It’s great fun for us and in return for the classes and 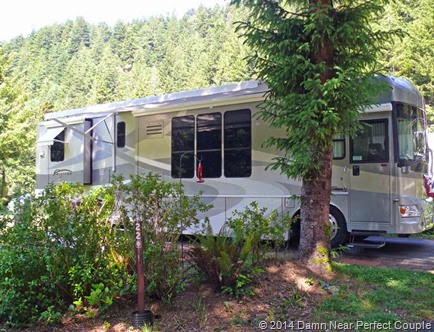 a one-hour program each Friday night, we’re given a great RV site with full 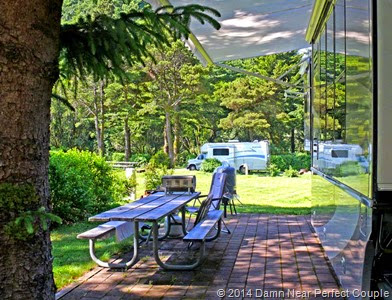 hookups, including a phone line.  Our site is under towering pines, with a paver-brick patio, table, and grill, and surrounded by Escalonia and huckleberry bushes.  We love to sit outside and watch the hummingbirds come to our feeder as the Steller’s Jays hop from campsite to campsite looking for any food that’s been left unattended. 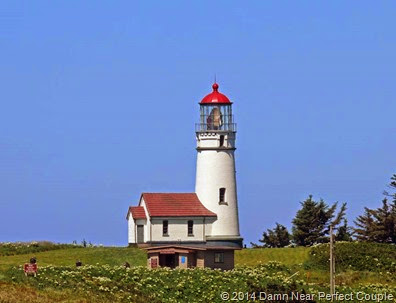 The scenery up and down the coast always amazes us no matter how may times we see it.  Not far from us is our sister park, Cape Blanco and it’s iconic lighthouse, which still operates as an aid to navigation.
Further north, on the site of a long-gone estate are the gardens of Shore Acres, now a state park with beautifully maintained grounds: 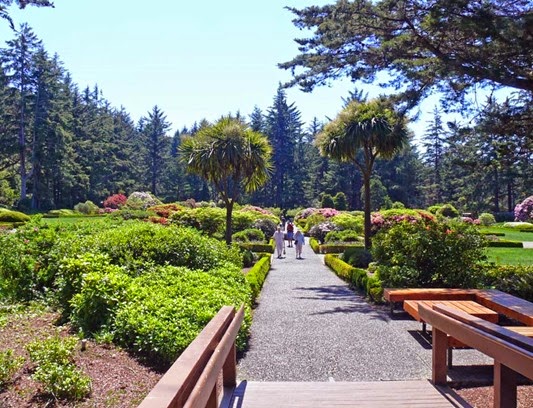 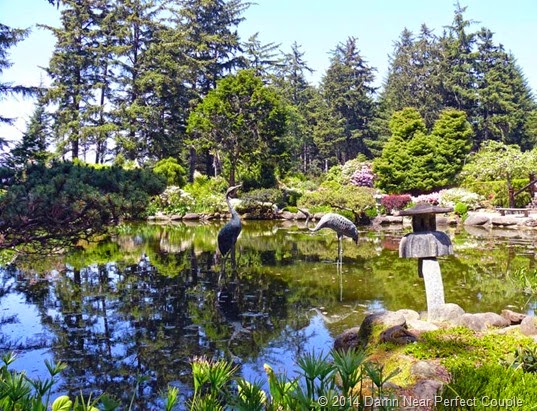 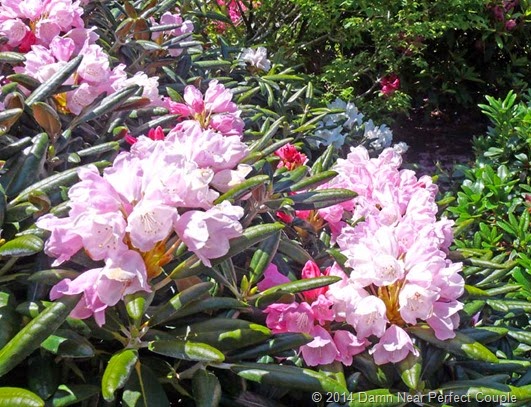 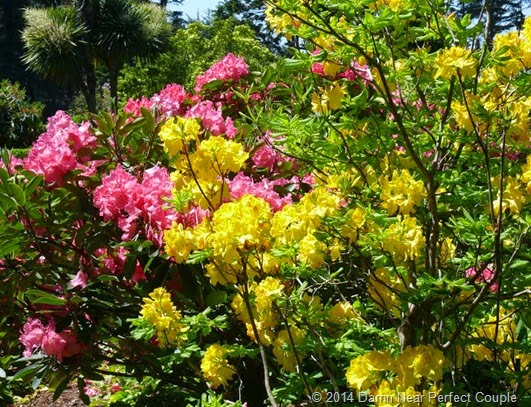 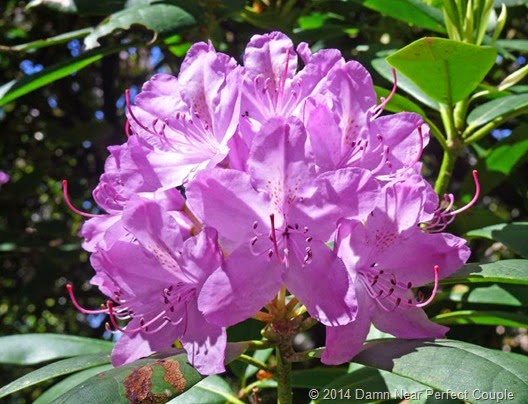 South of us is the town of Brookings Harbor and it’s fleet of fishing boats.  On the way, we passed a “sea stack” appropriately named Whale Rock, stopped and watched seabirds on rocky shores, and just sat and watched the waves roll in: 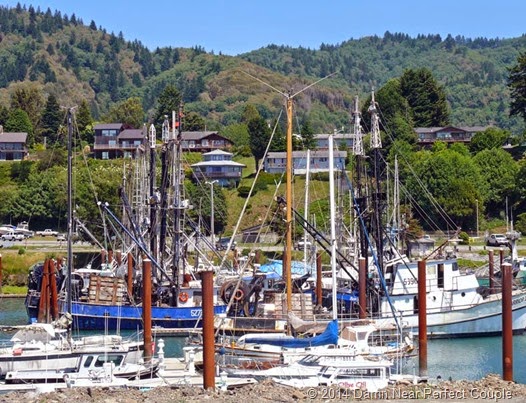 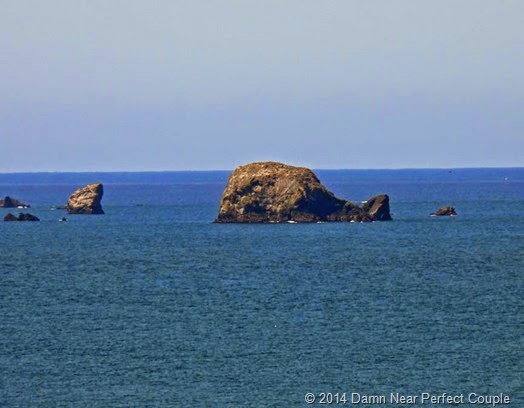 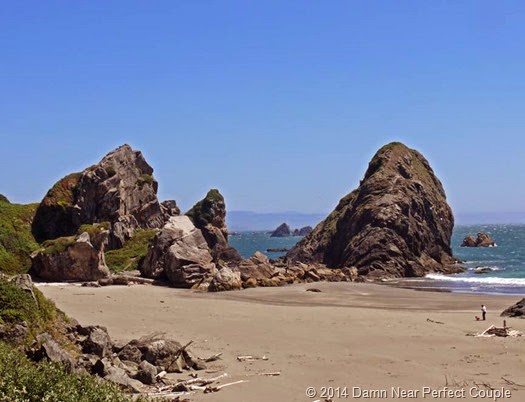 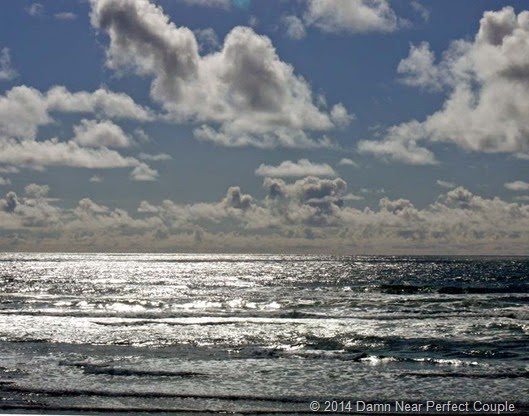 Inland from us are miles and miles of forest, almost all National Forest, BLM, or state owned, but with large tracts owned by lumber companies.   There are only two highways from the coast inland from where we’re located – one is 34 miles north of us in Bandon (US 42 South), the other is 72 miles south just outside Crescent City, California (US 199).  But there is one more road we wanted to try, a one lane, mostly paved road from the metropolis of 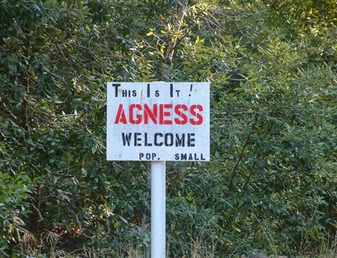 Agness, 35 miles east of the coast on the Rogue River, to just north of Grant’s Pass on I-5.  This 55-mile road winds through and over the coastal range, crossing the highest point at a bit over 5000’.  A beautiful, although slow drive, we marveled at the fact that we could drive through such beauty for so long without seeing a single building.  No houses, no people, nothing but temperate rain forest until the pass, then more typical western forest on the eastern side.  When we started our trip on the coast, the temperature was 62; on the other side of the Coastal Range in Grant’s Pass it was 82, making a stop at the first Frozen Yogurt place a must….for medicinal purposes, of course.  Some scenes from the trip: 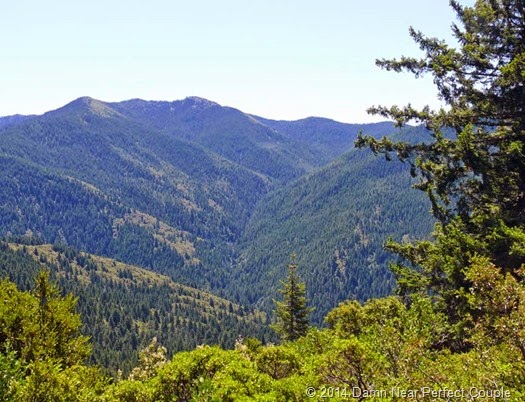 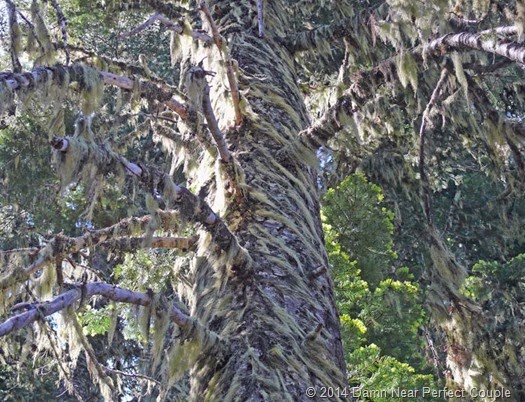 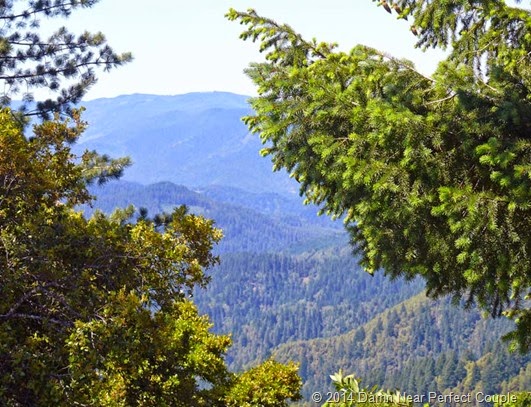 While other areas of the country are suffering through severe weather and crazy temperatures, each day here has been much the same, sunny and 65, with nights in the low 50s.  We don’t mind the cooler temperatures – we’d rather put on a sweater and enjoy the outdoors instead of being forced inside with air conditioning, and we get free firewood!
We’ll be back with more news from the Oregon Coast, so check back with us!
Posted by DNPC at 5:51 PM 5 comments: