We’re set up in our winter home on the Bandon Marsh National Wildlife Refuge. 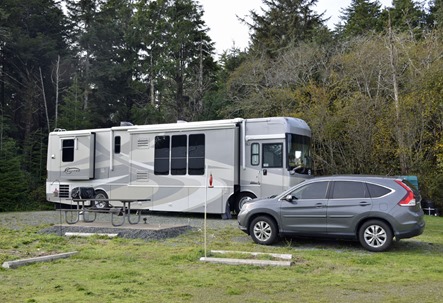 From our secluded site surrounded by forest, we can hear the fog horn in the nearby harbor and on quiet nights, the pounding of the surf.  Our site, on a former cranberry farm, has full hookups, a laundry room, workshop, and a locked gate.  We’re just down the road from the picturesque town of Bandon, and 20 miles from the Oregon coast’s largest city, Coos Bay.

After ten years of spending the winters in Texas and Arizona, we’ve come to enjoy the winter weather here.  It rarely freezes or snows, daytime temperatures hover in the 50s, and while it rains, it’s the price we’re willing to pay for all the green forests and grass.  On days when the weather gets depressing, all it takes is a trip to the beach to be energized by the crashing waves, screaming gulls, and howling wind. 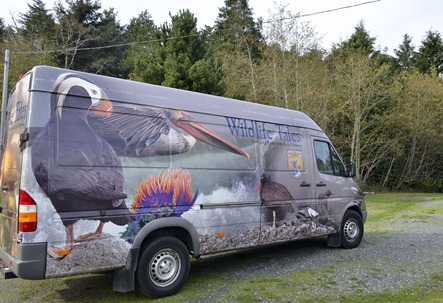 As volunteers for US Fish & Wildlife we’re involved in a number of projects, but our favorite activity has always been showing visitors the marine mammals at the Simpson Reef overlook near Coos Bay.  With our van decorated with coastal wildlife, Swarovski spotting scopes, and spiffy uniform jackets and hats, we head out to the overlook on most good weather days.

The reef is special place; here you can usually see all four of the major Seal and Sea Lions on the North American Pacific Coast.  In this picture you can see Harbor Seals (small gray ones), Northern Elephant Seals (BIG gray ones), California Sea Lions, and on the rocks in back, the light brown Steller Sea Lions. 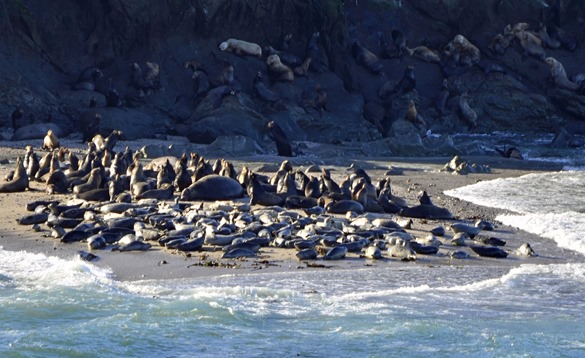 Other frequent visitors to the area are Bald Eagles, Peregrine Falcons, and this time of year a flock or “parcel” of Black Oystercatchers. 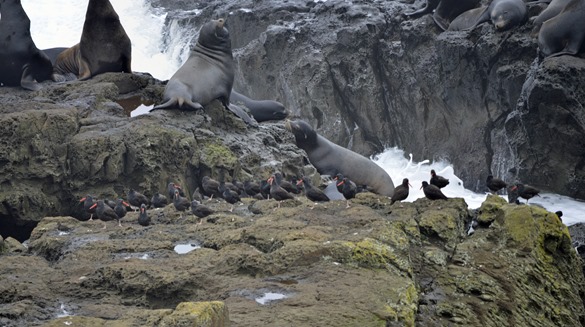 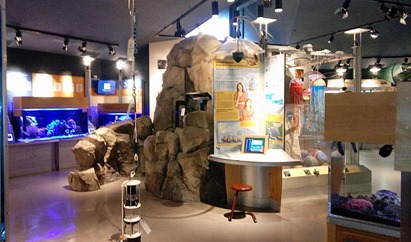 We managed to fit in a trip to Newport and the Hatfield Marine Science Center, one of the country’s leading marine laboratories.  We spent an afternoon in the visitor center, filled with interesting and interactive exhibits. 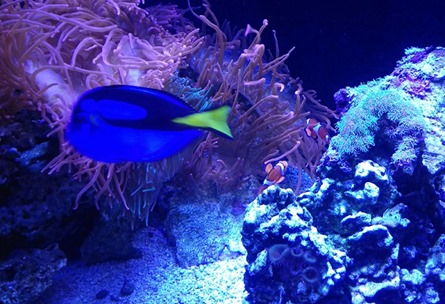 The displays and tanks held colorful aquatic plants and animals, but the highlight of our visit was the feeding of the Giant Pacific Octopus.  Although it wasn’t yet a “giant” it was entertaining.  As soon as a crowd began to gather near the tank, the octopus knew it was feeding time, became excited, and moved to the front to watch.  Then, as the staff member stood at the tank telling us about the octopus, first one tentacle, then another would slowly creep up the glass and up her arm to where she held the food. 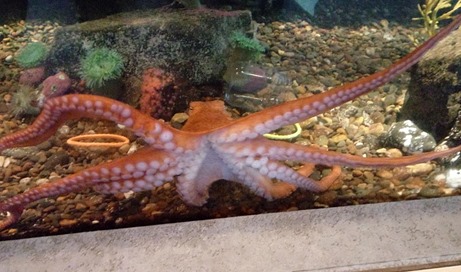 Without missing a beat, she would gently grab the tentacle and with the sound of suction cups popping, pull it from her arm.  Eventually her talk was finished and the octopus received a large clam, which disappeared quickly into the tentacles.

We had a great Thanksgiving holiday thanks to a visit from our daughter Kim, 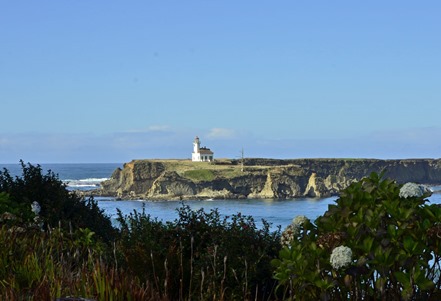 her husband Bill, and their friends Brian and Patty.  They found a waterfront VRBO (Vacation Rental by Owner) with a great view of the Cape Arago lighthouse.   We took a tour of Bandon, which always includes a stop at Washed Ashore.  Here volunteers make art from beach trash and their art is displayed around the world.  Their work is amazing – like this whale skeleton made of white plastic bottles and cups. 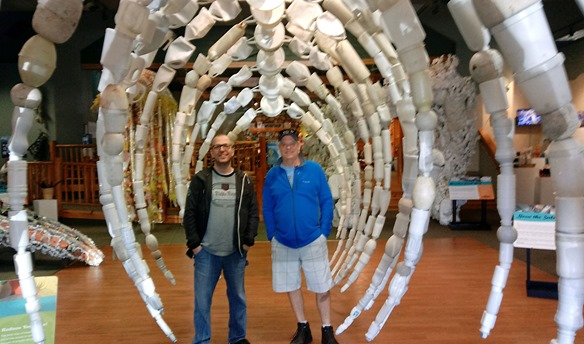 On Thanksgiving Day we traveled up the road to the Three Rivers Casino and a buffet with unlimited Dungeness Crab. 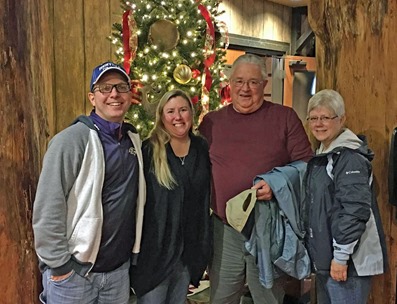 We kept a fair number of the casino staff running back and forth emptying our shell-filled buckets.  We heard a rumor that there was also turkey and ham on the buffet, but since the crab didn't run out, we couldn't be sure.  The next day Brenda and Kim created a memorable Thanksgiving dinner of smoked turkey, ham, and all the traditional sides.  The food was magical – it had to be to have vanished so quickly – and the table setting that Brenda created would make Martha Stewart envious! 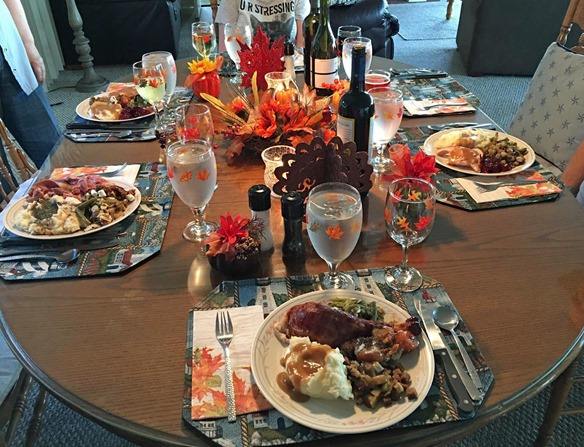 It’s hard for us to believe that we’ll soon be celebrating our 13th Christmas on the road.  But once again, we’ve hauled out the decorations and Brenda has turned the motorhome into a Christmas wonderland.  We’ve had another remarkable year of experiences and memories.   As we enter year 14 we’re thankful for our health, our ability to do what we love, and for our friends.  Brenda and I wish all of you a merry Christmas and a happy, healthy, and fulfilling new year. 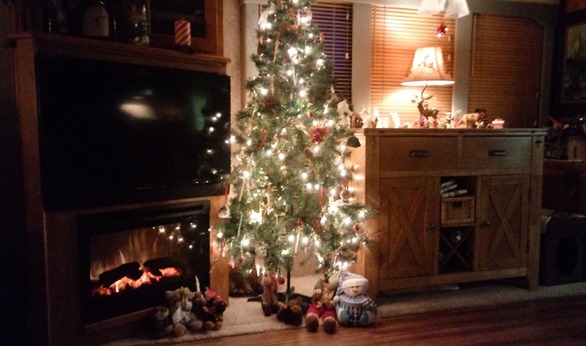