It’s a Tough Life If You’re a Baby Seal

We’ve spent a lot of time on the Oregon Coast as volunteers for US Fish & Wildlife, and although the entire coast is amazing, our favorite place is on an overlook of a large reef and small island called Shell Island.  Here, we set up our US F&W Swarvoski spotting scopes to give visitors a close up view of the Harbor Seals, California and Steller Sea Lions, and the amazing Elephant Seal.  The Northern Elephant Seal has an amazing history – almost complete wiped out in the late 1800s for the oil from their blubber, they’ve made a monumental comeback and probably number around 200,000 today.  While they spend most of their lives far offshore, their return to land for mating, birthing, and molting takes place in the warmer, more temperate areas of Southern California and so their presence here is both a bit unusual, and for the females, often tragic.

These are huge animals; males can be 15’ long and weigh 5000 pounds, while the females are a diminutive 10’ long and 1500 pounds.  Like other seals and Sea Lions they give birth once a year, but unlike others, they do it in mid-winter.  And therein lies the problem.

We’re accustomed to seeing three or four males on the sandy part of Shell Island; after all, it’s on their normal migration route, and like some Gray Whales, they seem to decide they’ve gone far enough and stay here.  But we were surprised one day a week ago when we arrived to see nearly a dozen females on the island.  And while they’re all pretty rotund, these ladies were really large.  We wondered what was going on, especially after our resident pair of adult Bald Eagles showed up and sat on top of the island’s highest rock, as if waiting for something to happen.

And then it did – one of the females became visibly agitated, the eagles became airborne, and a pup and afterbirth came shooting out of the female.  The mother quickly pulled the pup to her while the eagles landed for their protein lunch, and the mother and pup, heads together, rested.  After a while, mom moved the pup to her side and rolled over a bit to let it have its first meal. 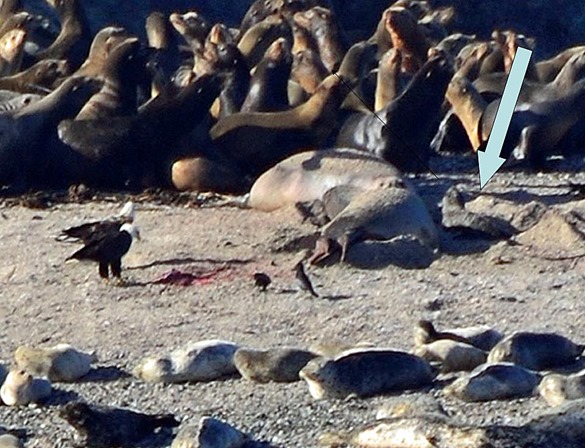 The next day, activity continued with another pup being born.  In this image, the pup’s head is visible near the front of the mother.  Her head is covered with blood from the afterbirth.

The pup was adorable, and the observation deck quickly filled with people waiting to get a close up view.  My camera’s telephoto lens doesn’t show the pup very well, but it was clearly visible through the spotting scopes.  So that you can see what the pup looks like, here’s an image off the internet. 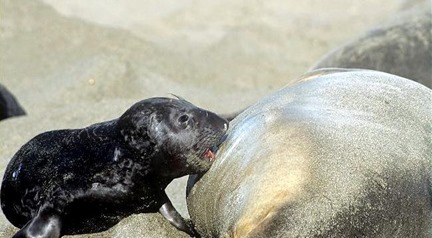 When born, the pup is a wrinkled, fuzzy, and between 50-80 pounds.  They’ll quickly grow, gaining ten pounds a day from their mother’s milk, which is the consistency of pudding.  At the end of a month, they’ll weigh around 300 pounds except for those who are able to feed from multiple mothers; known as “super weaners” - they can reach 600 pounds.

Why do they grow so fat so quickly?  Well, there’s a reason – unlike their relative the Harbor Seal, they’re born without knowing how to swim or fish.  And the adults abandon them on the beach after they’re weaned and leave them to figure things out.  So all the fat they’ve put on in that first month sustains them for the next few months while they figure out life in the ocean. And that brings us to the sad part of this story.

Simpson Reef and Shell Island are the northernmost breeding location for the Northern Elephant Seal.  Unlike the California beaches, here the water is colder, the tides are higher, and the winter storms fierce.  When we left the mothers and pups on the weekend there was a strong storm forecast later in the week.  The storm arrived, along with high tides, a strong surge that raised the water even higher, and 25-30 foot waves.  This is what the island looked like before the storm: 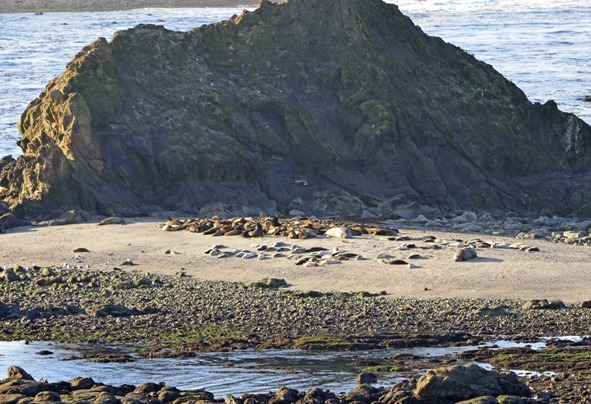 And this is how it looked during the storm: 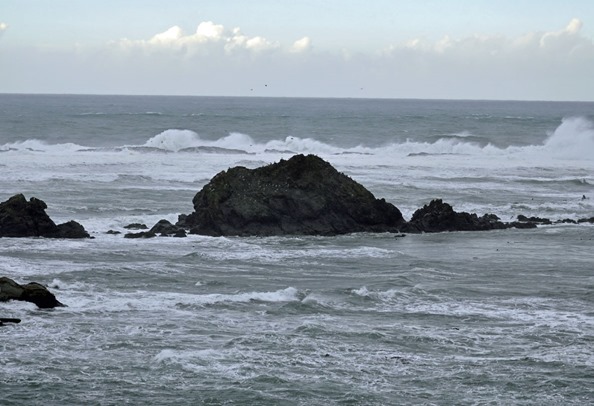 All of the seals and sea lions have dispersed, and sadly, the pups have been washed away.  We knew that the survival rate for Elephant Seal pups was very low here, but having witnessed the females struggle and then give birth, and see the pups in their first days, it was tough to see how cruel nature can be.  Perhaps we’ll see more births this year and with luck the seas will stay calm, but it’s not likely.  On the plus side, the Elephant Seal population continues to thrive thanks to the large numbers that breed and birth on the California beaches.

That’s it for now – thanks for reading! 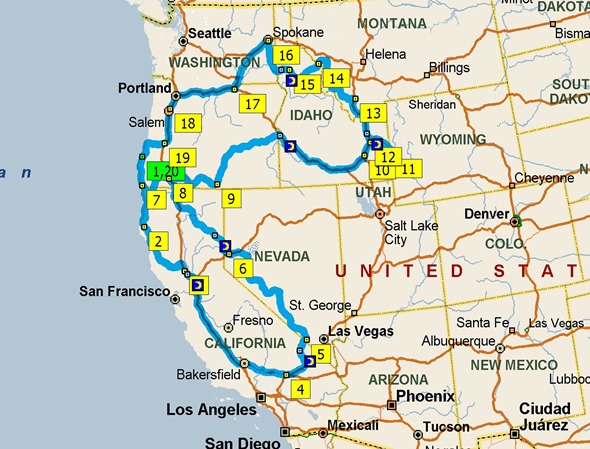 2017, our eleventh year of retirement and full-time RVing was enjoyable, interesting, and momentous.  Momentous because of a reminder of our mortality, when Brenda underwent triple-bypass surgery after a series of minor (thankfully) cardiac “events”.  We began the year at the Bandon Marsh National Wildlife Refuge, during a record period of rain.  There were times that it sounded as if we were under a waterfall, and listening to the TV or even talking was impossible.  But we found that even after a period of gray skies and rain, a trip to the beach with pounding surf, seals, sea lions, and gulls would make our time here worthwhile. 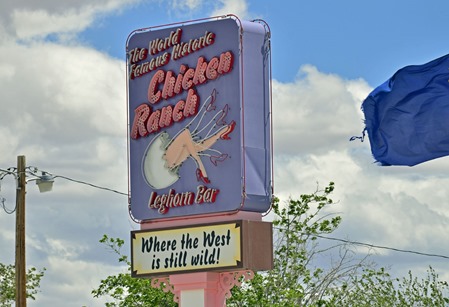 In April, we headed south to dry out and get warm.  We spent a month in Pahrump, Nevada, about 60 miles west of Las Vegas.  When we 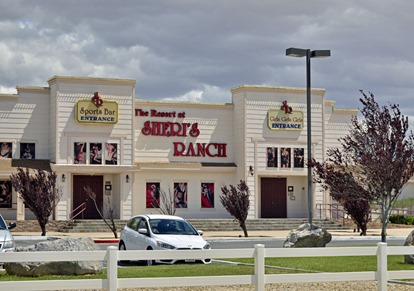 lived in Las Vegas in the late 70s, Pahrump was nothing but a collection of mobile homes and brothels.  It still has a lot of mobile homes and a few brothels, but has grown to a town of over 40,000 as people try to escape the high real estate prices of Las Vegas.  We enjoyed our stay, visiting the sights and traveling over the mountains to shop and dine in Las Vegas, but 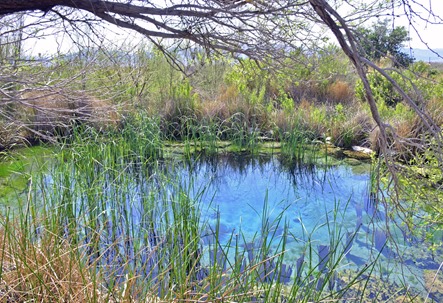 decided that one month was just about as long as we could stay and be entertained.  We were intrigued by the existence of legal brothels, and while we didn’t venture inside (really, we never did!), just the outside views were entertaining enough.  Ash Meadows NWR was a place we always wanted to visit, and were impressed by the facilities….but volunteering there (waaaay out there) is not something we’d consider. 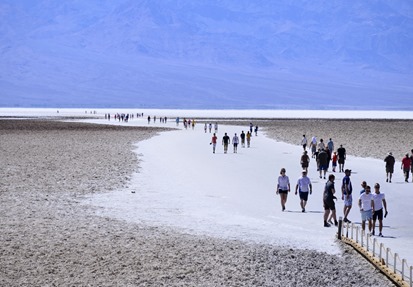 We also made a trip, for a reason that escapes us, to Death Valley.  Miles and miles of a parched, desolate valley where, if you step outside without lots of water, you’re certain to die a slow, painful death.  That’s why it’s called Death Valley. 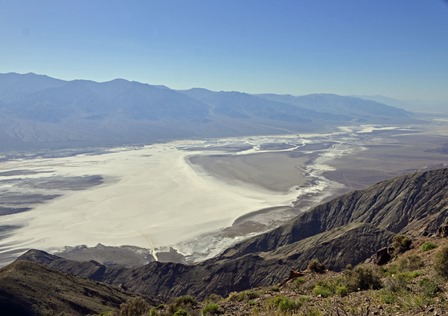 And why we and thousands of others insist on spending time there is mystery.  We watched as people walked a mile on a blistering salt lake where the high temperature has been recorded as 128F, just to take a picture of a sign…..what fun!  Yes, there are some scenic viewpoints, but only because what you’re seeing is far away and you can stay in your air-conditioned car.  Okay, you get the idea – this was our last trip to Death Valley.  We hope. 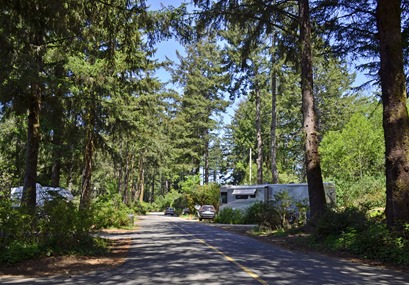 In May we headed back to the Oregon Coast for our summer volunteer position at Harris Beach State Park in Brookings.  This was a “partnership” position, where we worked for US Fish & Wildlife but were given a full hookup site in the park.  We set up spotting scopes for people to view the marine wildlife, and to “pay the rent”, we taught one Junior Ranger class a week and gave a program or nature hike once a week.

It was around mid-May when Brenda started experiencing what she thought was acid reflux problems.  After a few days of it getting worse, I convinced her to visit the local Urgent Care facility.  From there it was a whirlwind – fast car drive 25 miles to nearest hospital, 70 mile ambulance trip to bigger hospital, overnight stay and air evacuation flight to Eugene, ambulance again to the Oregon Heart and Vascular Institute, and finally early Sunday morning surgery.  Her triple-bypass was successful, the doctors and nurses were amazing, and Brenda’s recovery was beyond anyone’s expectations.  We were back on the job two weeks after she was released from the hospital, and she’s never felt better.  We’re so fortunate that we access to such great care – and so thankful to all of the wonderful nurses who cared for Brenda as if she were a member of their family.  And a special thanks to the Harris Beach staff and volunteers for their concern and caring. 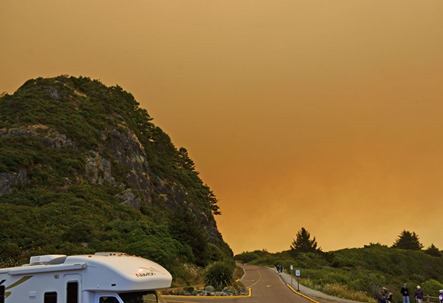 In spite of all of the spring rain, Oregon didn’t get another drop after early May.  By August, wildfires were raging throughout the West, and Oregon’s largest was approaching 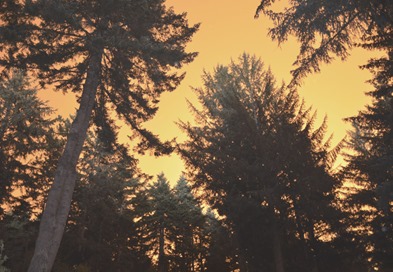 Brookings.  The sky was red, ash was falling, and the smoke thick when we received a call from Dawn, our US F&W contact, telling us to evacuate to Bandon.  We quickly packed up, said our goodbyes to the great staff and fellow volunteers, and headed north.  Fortunately for Brookings, the expected winds didn’t happen and the hundreds of firefighters were able to stop the fire’s advance.  Thanks, Dawn, for watching out for us!

After a short time in Bandon, we headed east to visit our friends Don and Betty who spend the summer in Wyoming’s Star Valley.  Our route took over roads we’ve traveled 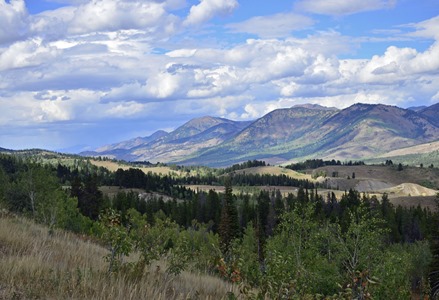 before; through southern Oregon and the Klamath valley, then up to Burns and central Oregon, then east into Idaho.  We spent a few days in Boise, and then continued on through Idaho to Pocatello and into Wyoming.  Star 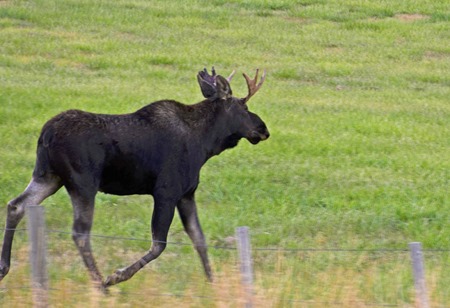 Valley is a beautiful place, surrounded by mountains and studded with small towns with interesting western history.  We explored the mountains, sampled the restaurants, and even had a chance to watch this moose as he raced alongside the road.

Saying goodbye to Don and Betty, we worked our way up to the Big Hole Valley and down into the Bitterrot Valley.  If you follow our travels you know 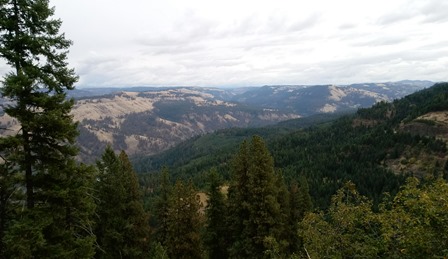 that we can’t pass up the chance to visit the area and our friends from our time volunteering at the beautiful Lee Metcalf NWR.  We spent a week visiting, then drove over Lolo Pass to once again enter Idaho.  Orofino is a place that isn’t well known, and we’re happy for that.  A beautiful RV park, some good restaurants, and great scenery make this a mandatory 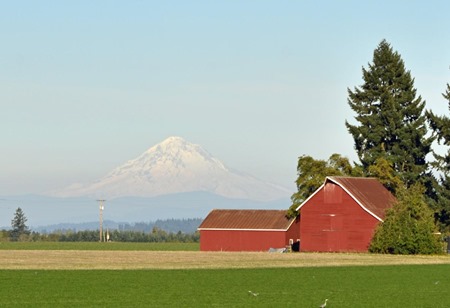 stop for us.  From there, it was north to Spokane and stocking up at the base commissary, and down to the Columbia River back into Oregon.  The Columbia River Gorge is an amazing mix of water and tall cliffs.  We visited The Dalles, a historic town with an exceptional historical museum.  We followed the r 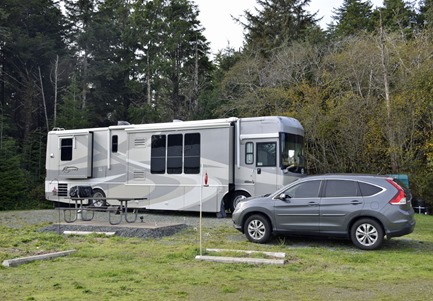 river to Portland, then down into the Willamette Valley, where Mt Hood dominates the landscape.  After a stop at the Woodburn Outlet Center to stock up on tax-free clothing, then back to Bandon for the winter.  We’ll be here until spring when we start a new adventure, so stay tuned, and thanks for traveling with us!