We’ve settled into a pleasant routine after almost six weeks here at the Patagonia-Sonoita Creek Preserve.  The weather has been typical for this time of year, with warm days and cool, often cold nights. 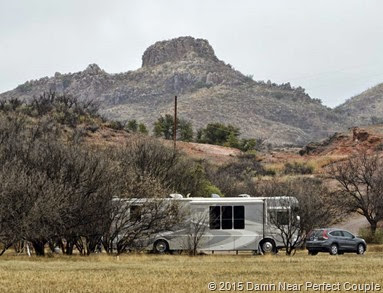 We’ve met so many great people who have come to experience the preserve and search for the Rufus-backed Robin, a bird that’s here but rarely seen in the U.S.  Most of our visitors are wintering residents from the North who are avid “birders”.  Boonie hats, backpacks, and cameras with huge telephoto lens are a common sight, and the first question we hear is “where’s the robin"?” 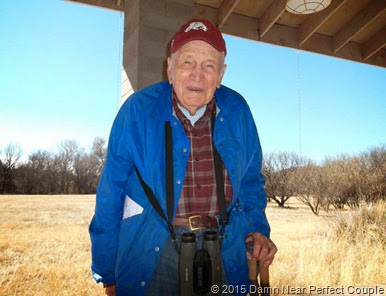 A few weeks ago we were treated to a visit from an 87-year old birder with a great smile and even better story.  Harlin tells how one day while out cycling, he was almost hit by an unknown bird.  Curiosity got the better of him, and so he bought a bird book, started identifying birds, and was hooked.  Oh by the way, he was 67 at the time.  Since then he’s traveled all over the country searching for birds and on the day he visited he hiked two miles and saw the Rufus-backed Robin – his 792nd bird!  So for those who have become interested in birding late in life – take note of Harlin’s accomplishments.  He says he’s hoping to reach 800 birds while on this trip from Sacramento, and we’ve no doubt he’ll be successful!

Although spring migration for the birds has just begun, we still have a large variety to view;  Rufus-winged and Lark Sparrows are everywhere, there are Yellow-rumped Warblers and Black Phoebes along the creek, and near the visitor center we have our official welcoming bird, this beautiful Vermillion Flycatcher: 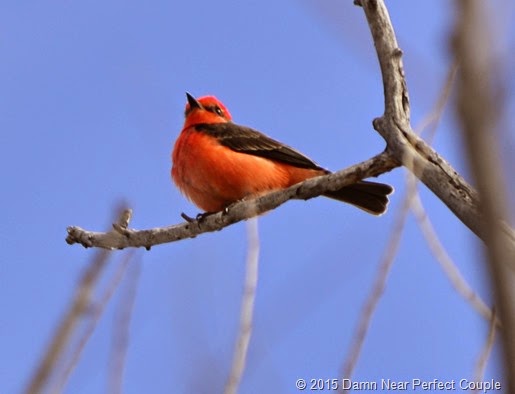 Gila Woodpeckers are common, and even though a beautiful bird, it can be a nuisance with their loud call, love of Hummingbird nectar, and  fondness for banging their beak on the visitor center’s metal roof: 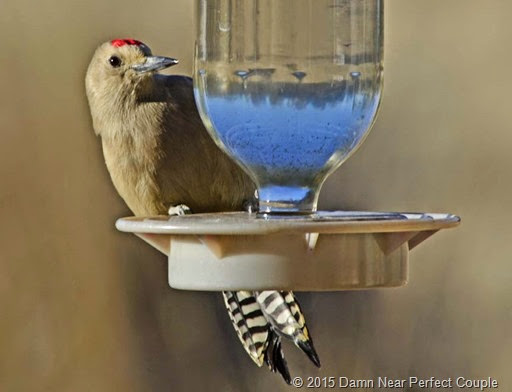 This Pyrrhuloxia is one of my personal favorites and is seen often in the bushes: 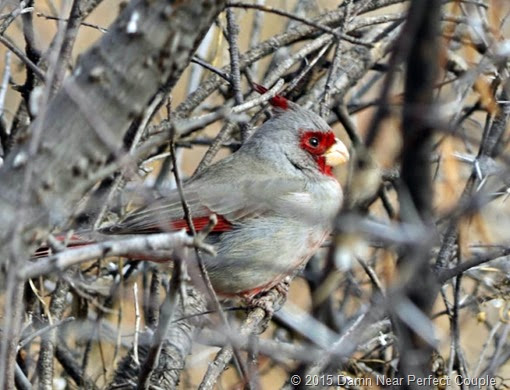 Almost every night we’re serenaded by our resident coyotes, and we’ve watched the local pack of three from our motor home as they roam around at dusk.  The alpha male paid us a visit one evening and I was able to get this picture.  At first we wondered if it was a Mexican  gray wolf (rare but occasionally seen) since it was so large, but on closer examination the ears, longer and more pointed than the wolf, proved it to be a very healthy coyote. 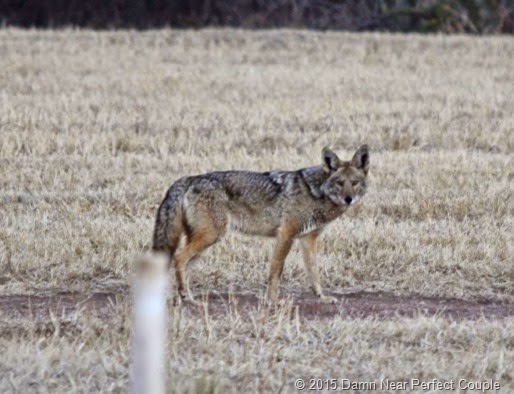 Javelina, or Collared Peccary are also residents here, with at least two families of eight to ten members.  Although they are not a member of the pig family the males have tusks and look sort of boar-like.  While they have a good sense of smell, their vision is poor, and with the wind in my face, I’ve had them come within 20 feet of me before realizing I was there.  About the only danger from them is once they do see you, they run off in all directions, blindly trying to escape, and will run into you if you’re in the way.  The babies are cute – they look like little piglets: 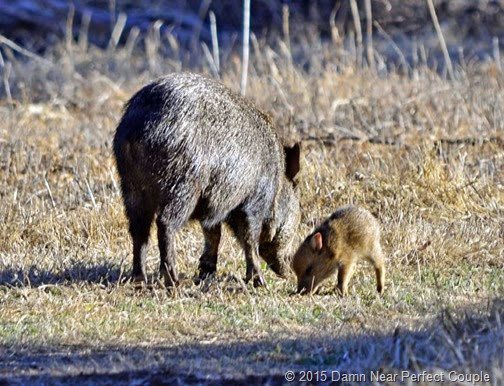 Coues deer, a member of the Whitetail family, are very common and we see them every day.  They’re not very large; bucks only average around 100 pounds, but they’re still bigger than the miniature deer we were used to seeing in Texas.  This buck is a frequent visitor to the meadow next to our motorhome: 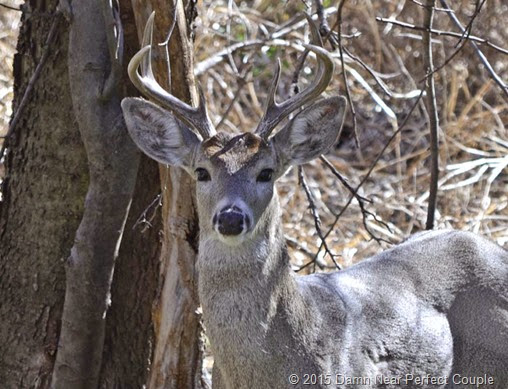 At least two Bobcat make the preserve their home, and are often seen on the trails or sunning themselves in the meadow.  We’ve seen both the medium-sized female and this large male that we surprised.  With the sun at our back, the poor guy had to squint to see us: 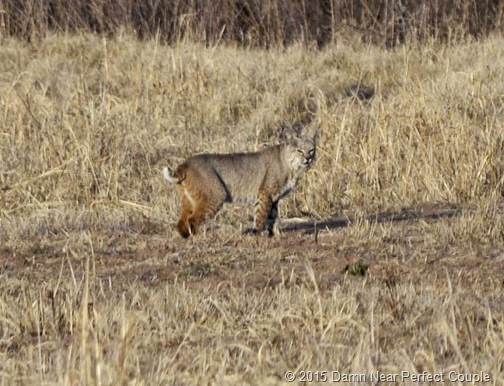 One animal we’ve seldom seen until volunteering here is the Coati, which looks like a cross between a raccoon and an aardvark.  We’ve watched our resident “troop” of about 20 females and adolescent males as they’ve rooted through the leaves looking for invertebrates and anything else tasty.  It’s not hard to know if they’re in the area - a troop of Coatimundi sound like a buffalo stampede coming through the forest.  They are such fun to watch as they busily root in the leaves, tails erect.  Who can resist that face? 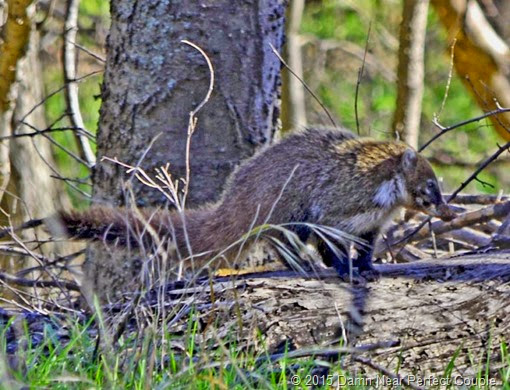 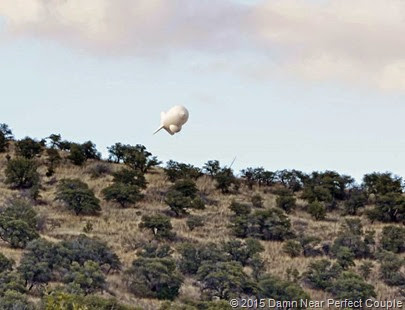 We’ve been out exploring the area, and have enjoyed driving the backroads into some of the less-traveled areas.  We’re about 20 miles from the border, and even if you didn’t know where you were, there are plenty of reminders. 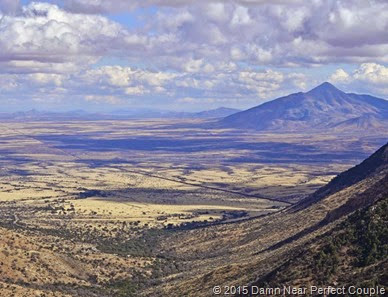 Border Control vehicles are everywhere, and watching the sky is the tethered Aerostat balloon launched from Fort Huachuca near Sierra Vista.  A bit further south, you can see the border fence as it stretches west toward Douglas, AZ. (you’ll have to click on the picture for it to be big enough to see)

Just over the Patagonia Mountains from us is the beautiful San Rafael Valley, nearly one hundred thousand acres of native grassland.  It’s hard to believe when driving through this pristine grassland that Tucson is only a little more than an hour away.  At the end of the valley is a ranch house which you’ll recognize if you remember the John Wayne movie “McLintock”. 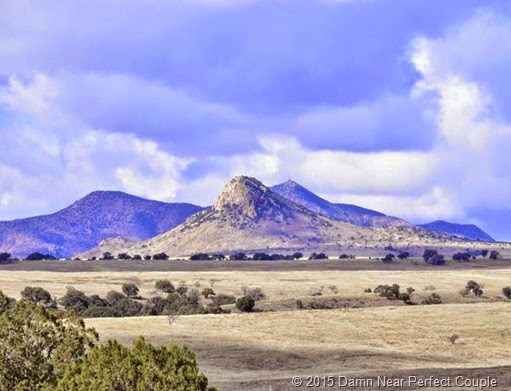 The beauty of the backroads of Southern Arizona simply can’t be described; you have to experience it in person.  Brenda and I remark almost everyday how lucky we are to have our traveling lifesytle.  If you haven’t had the opportunity to visit here, put it on your bucket list! 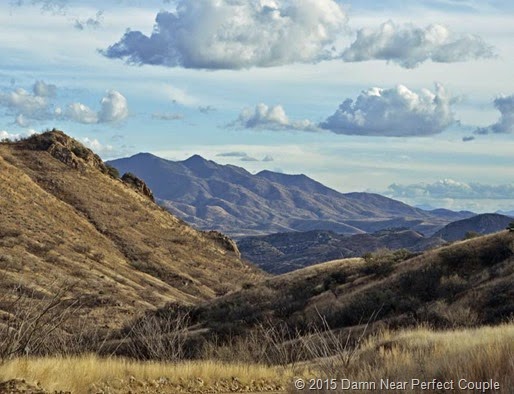 That’s it for this time – we’ll be here for a while, so check back!