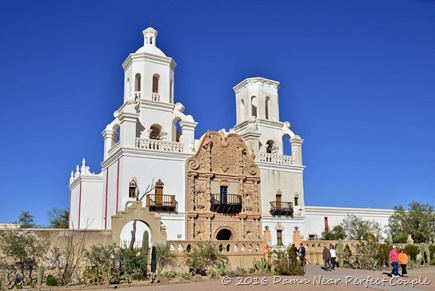 We’ve spent a good deal of time in Southern Arizona over the years, but have never run out of places to visit.  Some, like Mission San Xavier del Bac, are worth return trips to see the mission, shop the many vendors set up outside, and see the changes as the continual restoration takes place. 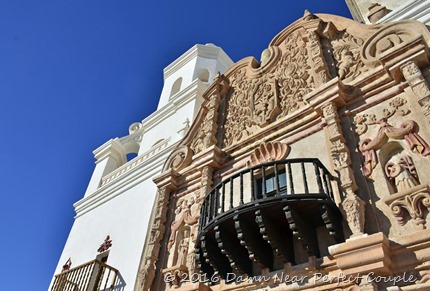 The mission, known appropriately as the “white dove of the desert” was founded in 1692 by Father Eusebio Kino in 1692, and the current building was started in 1783.  It’s been an active church over the years, and  is still an active church and convent on what is now the Tono o’ odham Reservation. 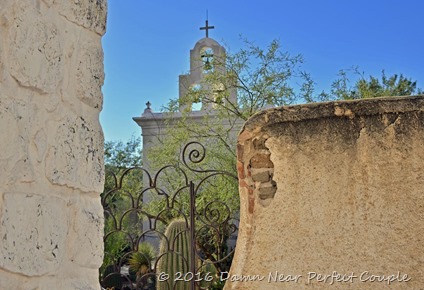 Brenda and I first visited the mission in the early 70s while stationed in the area.  We remember the exterior as being beautiful, but the interior was worn and the wall sculptures and paintings were dull and damaged.  Now, walking into the church is a visual explosion of color and ornate sculpture, thanks to a major renovation begun in 1989. 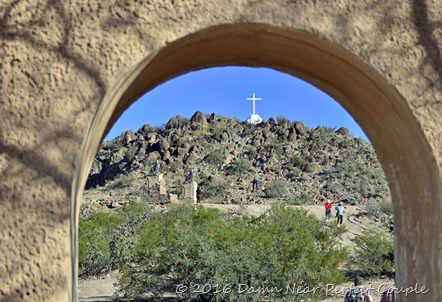 A film in the museum tells the story how a number of expert craftsman from Italy and Spain were assembled and brought to the mission to begin the slow, painstaking task of restoring the mission to it’s original condition, both inside and out.  A select group of Tono o’ odham were chosen to travel to Italy, apprentice with these experts, and return with them to help restore the mission and carry on through the years. 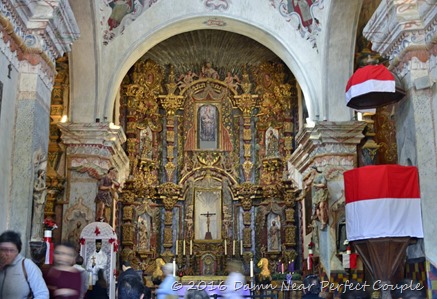 One of the interesting aspects of the movie told of the exterior deterioration.  Each year, crews would repair the walls and roof with cement and white paint.  It was discovered that it sealed the interior adobe and because it couldn’t “breathe”, it would deteriorate.  They found that the original builders used lime, sand, and the crushed liquid of Prickly Pear cactus which bakes to a bright white in the desert sun.  This is the mixture used today and it’s proven to last longer and be more protective than “modern” methods.  All in all, it was an interesting visit for us, both in admiring the beauty of the mission and learning the details of the restoration. 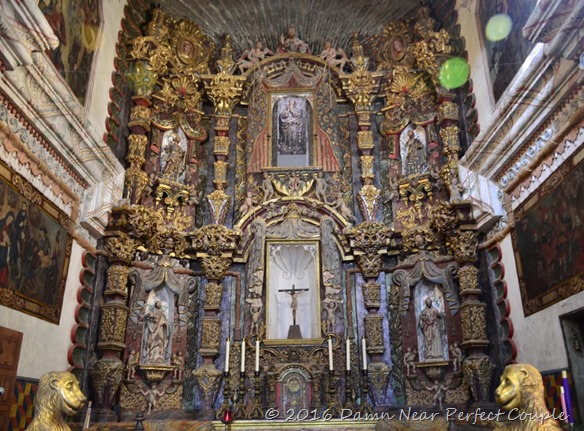 Where there is mining in the West, there are ghost towns, and Southern Arizona has more than it’s share.  We took a road trip along the “Ghost Town Trail”, an area east of Tombstone that once was a thriving mining area. 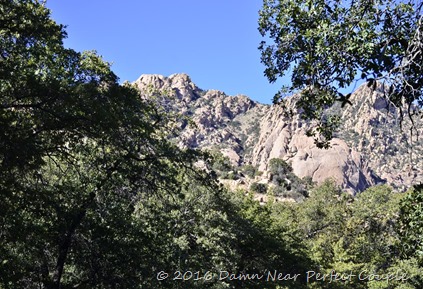 We started on the eastern edge of the trail at Cochise Stronghold, an area in the Dragoon Mountains where the Chiricahua chief and his band lived for about 15 years and where he is reputed to be buried.  It’s a pretty place of rocks and oak forest, cool and shady in this area of desert.  From there we traveled to Pearce, a town that once had 1500 residents but now is just a few dilapidated buildings and mobile homes.  Turning onto the dirt road to Tombstone, the landscape begins to look “lunar” until coming to an area of hills and the site of Courtland, completely abandoned with only a few ruins left from a town that once had 2000 residents and a movie theater. 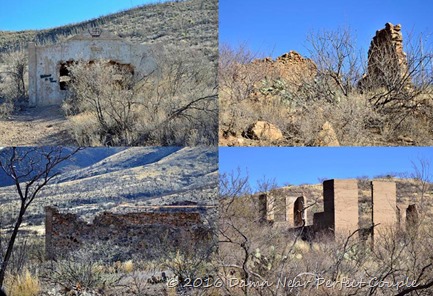 Further down the road was Gleeson, once a copper mining town. Traveling through this area makes us wonder just how people lived here – little shade, no surface water, hot summers and cold winters….and Domino’s didn’t deliver!  We finished up our drive in Tombstone, spared from becoming another ghost town by the tourist draw of the O.K. Corral and the Earp Brothers.

We come to Southern Arizona to avoid the cold and snow of the north, so naturally we woke up on day to 26 degree temperatures and snow.  Looking out at the foothills we saw a completly different scene than normal – but it was beautiful!

We decided to take a road trip to Parker Canyon Lake, knowing that being higher in elevation it  would be a pretty trip.  So with friends Don and Betty, we headed south to the lake. 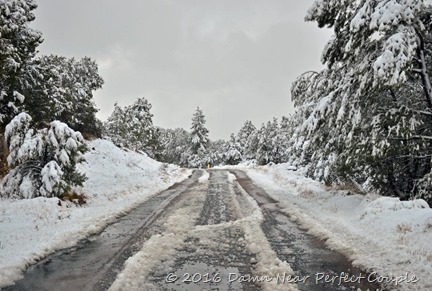 As the road wound its way up into the hills, the snow started getting deeper……and deeper.  But the views just got better.  We finally arrived at the lake, just in time for a bit of sunshine that made it the perfect day.  We’ve been to the lake a number of times, but never had a view like this: 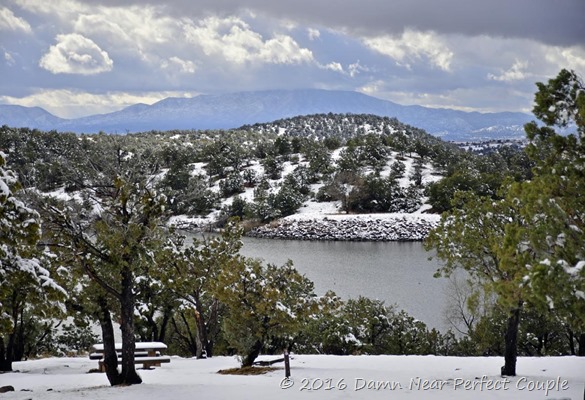 Driving home, we had this view of the western slopes of the Huachuca Mountains: 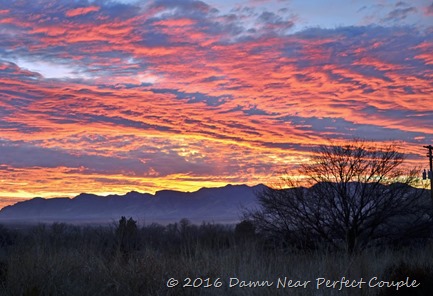 We’ve enjoyed our time in Benson and the Saguaro SKP Park, but are moving on to the west looking for new sights and warmer weather.  We’ll miss our friends Don and Betty and Kirk and Sue, but as full- timers we know it’s never “good-bye”, just “see you down the road”.  And we’ll leave you with one of those famous Arizona sunsets.  Until next time, when we’ll “see you down the road”!

December, 2015 marked the completion of 10 years of full timing – how fast the time goes!  It seems like just a few years ago that we were attending RV shows and taking factory tours, planning for a life on the road.  We’ve no plans to slow down, and look forward to another year of adventure! 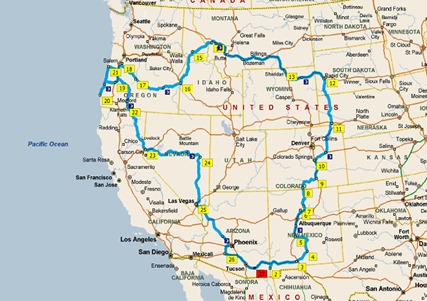 Our  year started in Patagonia, a small town 20 miles from the Mexico border where we spent three months volunteering at the Patagonia-Sonoita Creek  Preserve.  It was as if we had our own nature preserve; over 300 acres of Cottonwood, Sycamore, and Hackberry trees, a year-around stream, and open meadows.  We marveled at the wildlife; each day seemed to bring a new variety of bird to the area, and we watched Javelina, Coyote, and Bobcat from our site.  Birders came from all over North America to see the elusive Rufus-backed Robin, and  we expanded our birding “Life List” along with our “learning new things” list – what a great time we had! 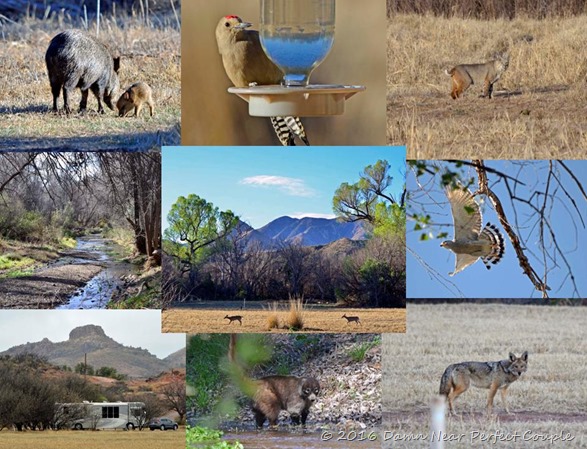 We found time to make a trip to Whitewater Draw, winter home to thousands of Sandhill Cranes.  Each day in late morning they return from foraging in the area, and the sight of more than 20 thousand of these beautiful large birds as they maneuver to land is an unforgettable sight. 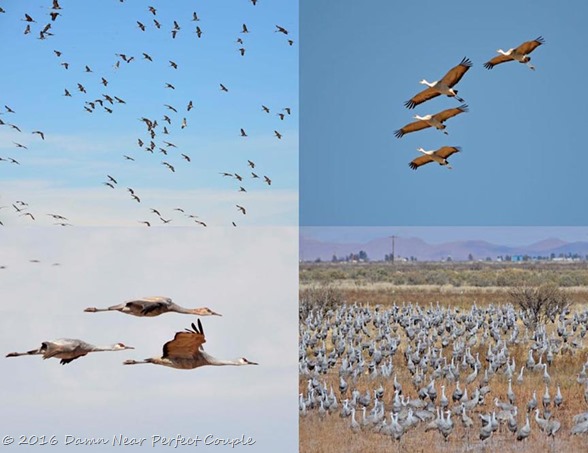 We also had the chance to visit two of our favorite “sky islands”, the Chiricahua Mountains and the Pinalenos, better known as Mount Graham. 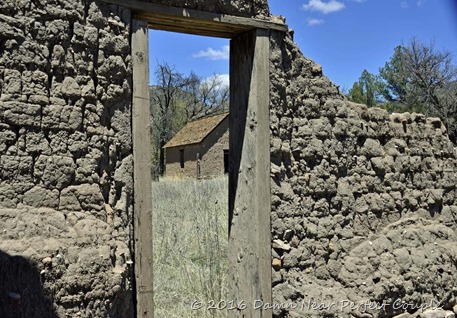 The Chiricahuas have always been a favorite; remote, majestic, and lightly visited, they’re mentioned often when reading of Geronimo, Cochise, and the Apache wars.  Some accounts mentioned Camp Rucker, but there are no mentions of it in Forest Service literature.  Using Google Earth, we were able to find what looked like remains of buildings, and after a search along back roads, found a trail to the historic camp. 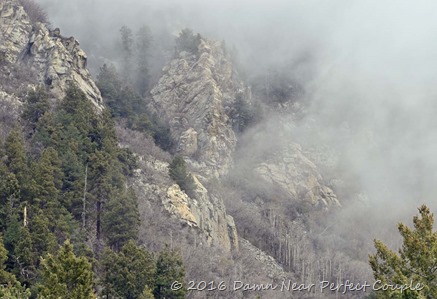 Walking through the remains of the camp we wondered how men managed to live in this isolated, but beautiful place.  Our trip to the summit of the Pinalenos was cut short when at the 9000’ level we ran into snow and freezing rain.  Although the snow and fog on the rocks was mesmerizing, we decided to turn back and try again on some other day.
Leaving Arizona, we traveled east to Las Cruces for a stop at La Posta, our favorite Mexican restaurant, then up to Alamogordo to visit the Sacramento Mountains. 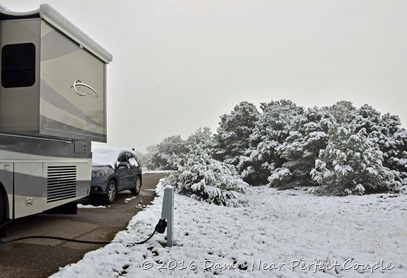 Then up through Albuquerque to Santa Fe and a bit further to Los Alamos and Bandelier National Monument.  We were impressed with Bandelier and the surrounding area; an unusual mix of plateaus and canyons.  From there, we headed north into Colorado and then through the plains into Nebraska and up to Rapid City.  Along the way we woke up one morning to an unexpected world of snow, and along the way were treated to vistas of the snow-covered Rockies. 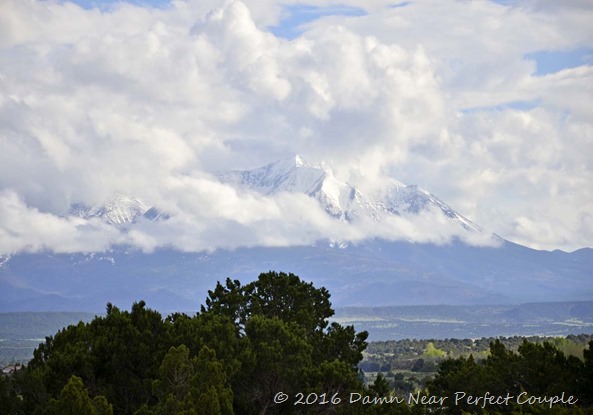 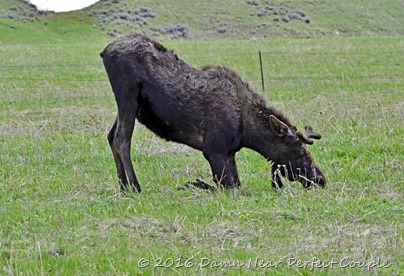 After finishing up a visit to our home state to renew our driver’s licenses, we drove west through Wyoming to Sheridan, an interesting town surrounded by high mountains.  We enjoyed the town, but the highlight of our visit was a drive into the Big Horn Mountains where we watched as this young Bull Moose had to kneel to graze on the turf. 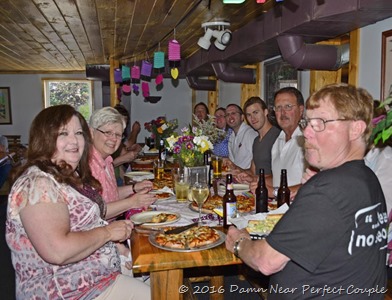 Then on to Missoula, where we celebrated Brenda’s birthday with friends from our volunteer days at the Lee Metcalf National Wildlife Refuge along with a visit from our friends Kirk and Sue.  Brenda had a surprise when our daughter, her husband, brother, and nephew appeared at the party.  The look on her face was priceless, and of course after 45 years together, so is she! 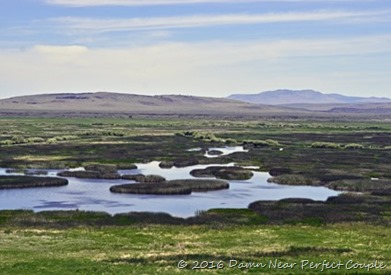 All too soon it was time to head for the Oregon Coast. We took our time traveling through Eastern Oregon, spending time at the now-famous Malheur National Wildlife Refuge and Steen’s Mountain. We spent a few days in beautiful Bend, and then spent a few days visiting with our friends Rob And Syd who were hosting at Humbug Mountain State Park. Finally, we drove north along the coast to Newport and BLM’s Yaquina Head Outstanding Natural Area.
Volunteering at Yaquina Head was rewarding, enlightening, and fun – everything we had hoped for and more! As a “tide pool guide”, I spent my time on the cobble-rock beach interpreting tidepools to visitors, while waves crashed and gulls screamed…..an amazing experience. Brenda ran the desk at the Interpretive Center, where she helped the many visitors, scheduling lighthouse tours and providing information. We learned new skills, made new friends, and discovered new restaurants – a perfect summer! Some of our favorite images: 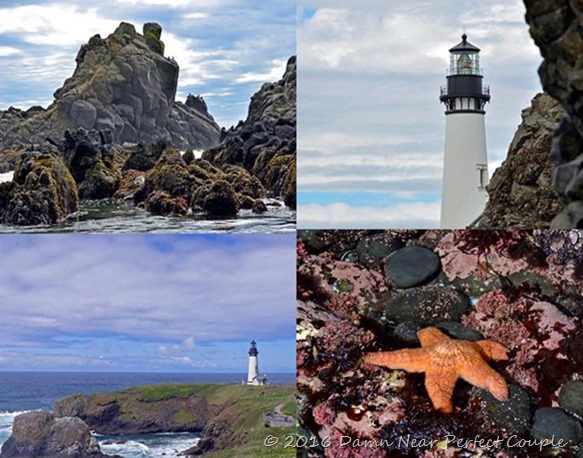 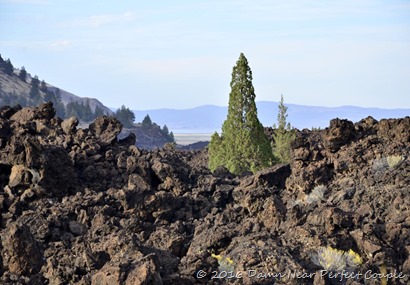 Leaving Yaquina Head, we decided to detour from our normal route and visit South Central Oregon, stopping at the Klamath National Wildlife, and further on, Lava Beds National Monument. Both were first time visits for us, and we were especially impressed with the lava beds – miles and miles of rugged country riddled with over 800 caves. Another area of natural beauty with very few people! 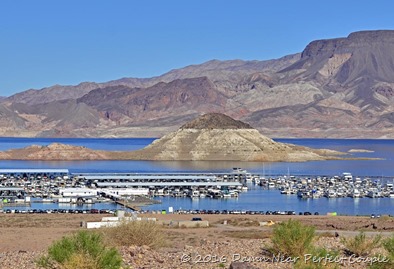 Continuing south, we visited Reno, then pushed east to Ely where we had hoped to explore the Great Basin National Park.  Alas, the weather wouldn’t cooperate, so we traveled down to Las Vegas for a week at Nellis AFB.  We didn’t visit the strip or downtown, instead we spent time in Red Rock Canyon and took a trip to Lake Mead to see that the lake levels have continued to fall. 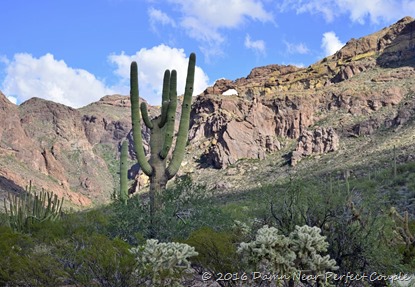 We finished our travels with a visit to Organ Pipe National Monument, another seldom-visited place with unique beauty.  Adjacent to the border, the rugged mountains and lush desert monument is a magical place that we’ll come back to.
It was a great year and we made lifetime memories.  But without doubt the most memorable day occured while we were volunteering a the Patagoinia-Sonoita Creek Refuge.  While talking with a group of visitors on the viewing deck, a Black-chinned Hummingbird, fighting with another, flew smack into the feeder’s support bar and fell onto the feeder, eyes closed, tongue hang ing out, wings askew.  We all crowded around – it looked dead…..no movement at all.  Brenda ran back into the office, got on the computer, and googled “hummingbird ran into feeder support bar and knocked itself out”.  Right……..like a computer will understand that!  She came running back out, saying “I know what to do!”, reached down and gently stroked the hummingbird’s chest a few times…..stopped…..did it again…..and again….AND SUDDENLY THE BIRD’S EYES OPENED!  It blinked a few times, sucked in it’s toungue, pulled in it’s wings, and slowly raised itself up…..and flew away.  Brenda just smiled and said “it’s what google told me to do – CPR for a hummingbird”.  So now I’m married to a woman who is hummingbird CPR qualified!  Just another of her many talents…..
Thanks for reading our blog, and we hope we have the opportunity to meet you somewhere along the road.  We’ll be starting travel again soon, so stop back and check on us!