Traveling Back to Oregon 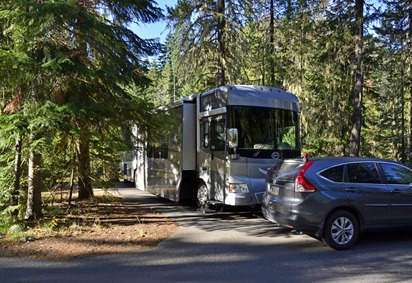 Leaving our friends in Montana, we climbed into the Bitterroot Mountains and past the recently burned landscape up to Lolo Pass and into Idaho.  Here we found one of those great places to spend time that they show in the RV commercials – high in the forest, huge spaces, next to a roaring river, and an electric hookup!  Located about twelve miles from the pass, the Powell Forest Service campground has paved sites, picnic tables, and a fire ring, all for $10/night with the senior pass.

Descending from the mountains into the Clearwater Basin is always an amazing experience.  From miles and miles of winding, forested road along a roaring river, t 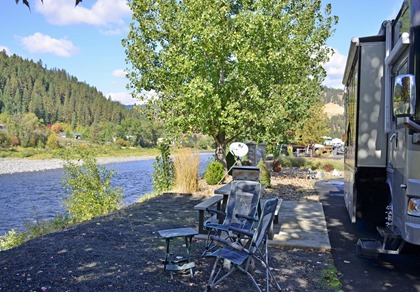 o an open valley with low mountains in the distance, then back along a narrow canyon and the Clearwater River.  We passed through the small towns of Koskia (Koos-kee), and Kamiah, and settled into a week long stay at our favorite park in the area, The Clearwater Crossing RV Park in Orofino.  We were able to get our favorite site on the river, with a great view and the sound of river right outside our door. 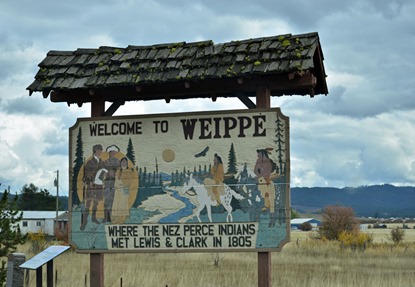 This is Nez Perce and Lewis and Clark country, and it’s difficult to travel anywhere without seeing historical signs.  Near here, above the river valley, is the little town of Weippe.  Near here in September 1805, the first members of the Lewis and Clark Corp of Discovery emerged from the Bitterroots starving and weak.  The Nez Perce, who were gathering Camas Root for food, welcomed and fed them Camas and dried salmon.  While they didn’t starve, they didn’t exactly fare well, either – they weren’t accustomed to high fiber, gorged themselves on the Camas Root and became very, very sick.  As Clark wrote “I am verry Sick to day and puke which relive me.”  The Nez Perce must have wondered about these white men who spent days lying around, passing gas, puking, and running into the bushes to relieve themselves.

Leaving Orofino and the river, we climbed up a winding road with many switchbacks to get to the “Palouse”, miles and miles of rolling hills covered with wheat fields.  Stopping on the way, we looked back into the valley: 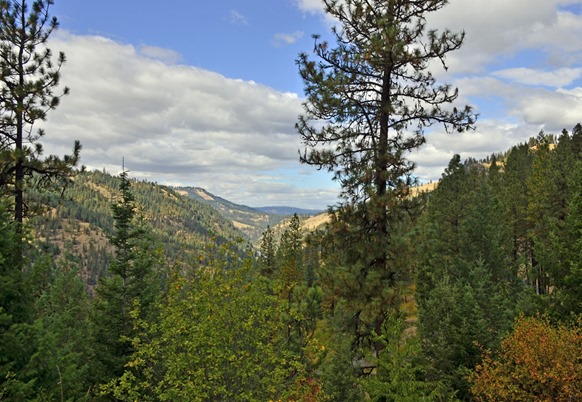 This is an area that looks more like Iowa than the Northwest; miles and miles of fields with farms tucked in among the hills.  The Palouse produces 125 million bushels of wheat each year. 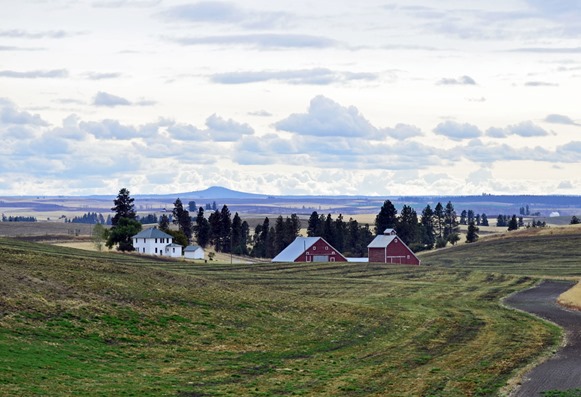 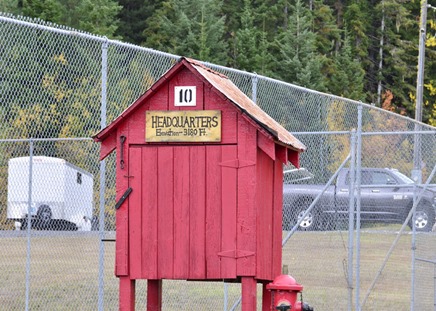 We continued up and into the backside of the Bitterroot Mountains, back into forest and to the end of the road at Headquarters, once a town but now just a place with empty buildings and a fire station.  From here, we drove back roads looking for wildlife and came upon this beautiful lake: Along the road we found this White Ash tree with its contrasting berries: 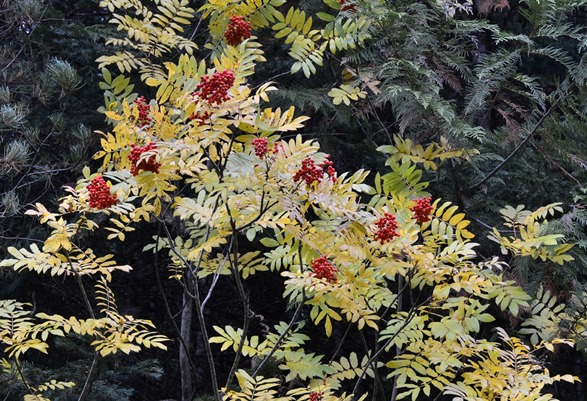 Heading home, we stopped along the road above the river valley to enjoy this view: 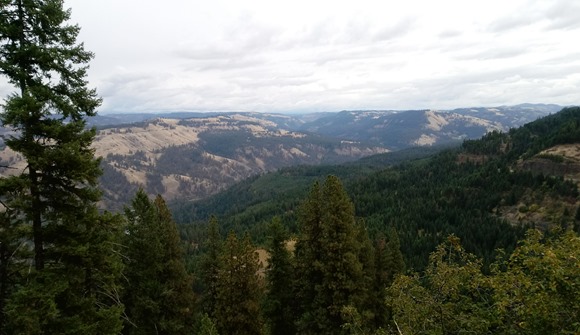 Just downstream from Orofino is Dworshak Dam, at 717’ the third-highest dam in the country.  Built on the North Fork of the Clearwater River, it was controversial since the river was one of the best Steelhead Rivers in the country, and it would be too tall for fish ladders for returning fish to spawn.  A compromise was reached, and today below the dam is one of the largest “mitigation” hatcheries in the country.  Here, Steelhead and other migrating fish are raised and released for their 1000 mile migration to the ocean and back to spawn in the Clearwater River.  It’s a great place to visit with a large visitor center and tours of the dam and generators. 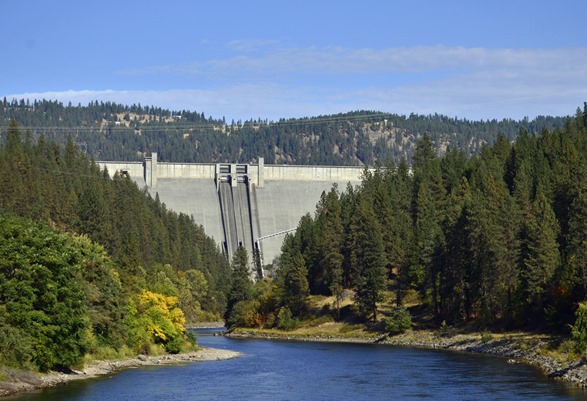 From Orofino, we headed north to Spokane for a brief stay at Fairchild AFB.  Stocking up on groceries, we headed south to the Columbia River where we spent some time at a great Corp of Engineers park, LePage COE park.  Located where the John Day River interests the Columbia, the park has long, paved pull through sites with a great river view.  50A electric and water hookups, all for $12.50/night with the senior pass.  The site was outstanding, and the views were amazing:

The Columbia is a huge, fast flowing river that, as we later learned, was here before the mountains on each side were formed.  Towns are crammed into any near-level area along the river.  One of the larger, The Dalles, is a good-sized community focused around a huge dam and power plant: 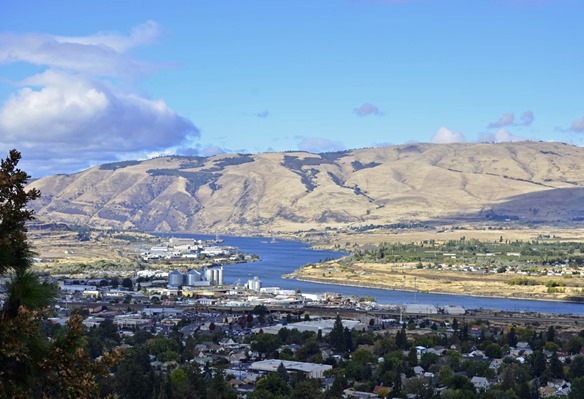 In The Dalles, we visited the Columbia River Discovery Center and Museum, one of the finest we seen.  There were numerous rooms of interactive exhibits, historical artifacts, and educational material.  We spent hours exploring the different galleries, and truly enjoyed the museum and the view from outside: 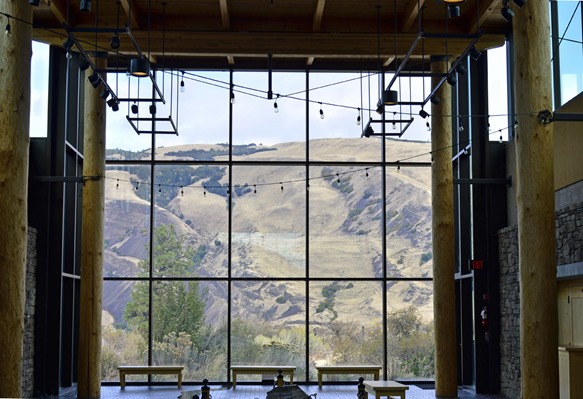 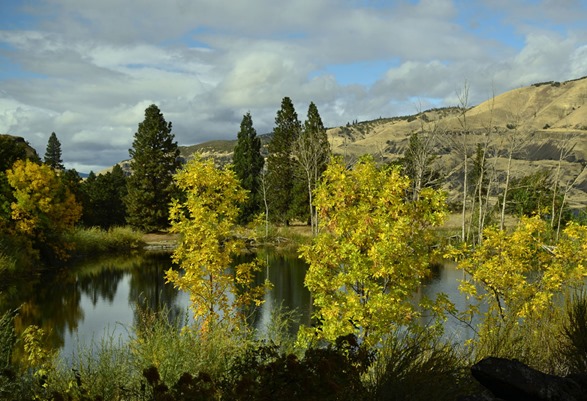 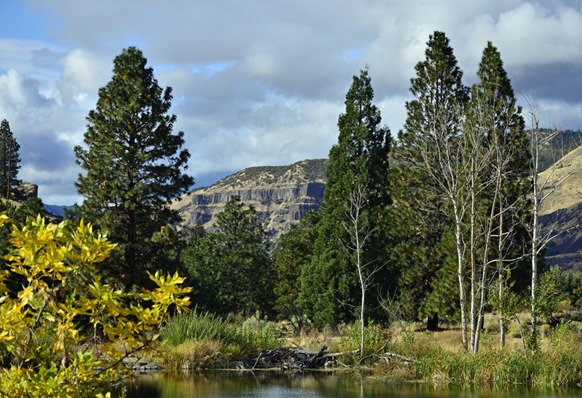 Our next stop was in the Willamette Valley to visit the Woodburn Outlet Mall, a huge collection of stores, to stock up on tax-free winter clothing.  It’s a pretty area of farms, with Mt Hood standing tall on the horizon: We’re back at the Bandon Marsh National Wildlife Refuge for the winter.  While 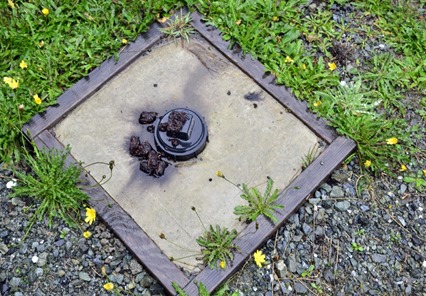 hooking up the sewer hose, I found this fox scat on top of the sewer fitting.  I knew they were intelligent, but his attempt to use the sewer apparently fell short when he couldn’t figure out to unscrew the cap.  But nice try, Mr. Fox!

A Trip to Star Valley

We plan on spending the winter on the Oregon Coast once again, but decided to take a trip to Wyoming to visit our good friends Don and Betty and make a stop in Montana on our way back.  We spent our first night on the road near Medford, OR, in the wildfire smoke-filled valley.  The visibility was down to less than a half mile and the air tasted of smoke and burned the eyes.  We drove east to Klamath Falls, where the air began to clear, and from there into Idaho where the weather changed and the smoke started to dissipate.  We spent a few days relaxing and shopping in Boise, one of our favorite towns, then headed east into Wyoming.  We turned onto Idaho 34 at Soda Springs and began a scenic drive over the mountains into Star Valley.  At around 6200’ elevation, it’s hard to believe it’s a “valley”, at least until you see the 9000’ mountains to the East. 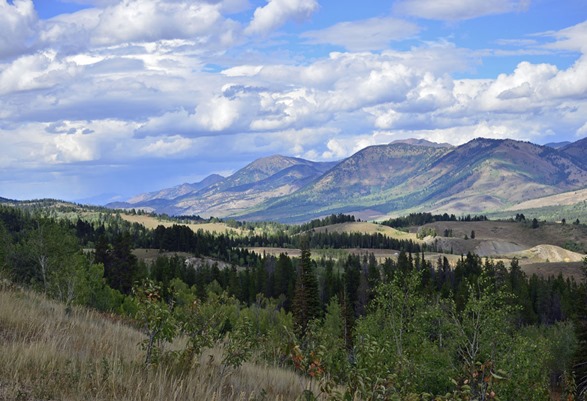 Don and Betty own a lot in the Star Valley Ranch, a huge RV resort outside the small town of Thayne and about 60 miles south of Jackson.  Besides the RV Resort, there is a housing subdivision, an area of small ranches, and two golf courses.  It’s an impressive development; you can read about it here.  And, it’s still growing! 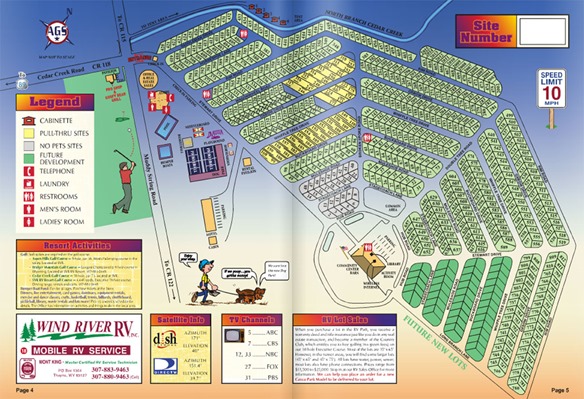 With Don and Betty as our tour guides, we traveled down the valley taking in the sights.  We drove back into the mountains along beautiful wooded roads where the leaves were just beginning to turn.  This is an area where sheep are grazed in the summer, and we came across this sheepherder's wagon, complete with spare tire and solar panel. 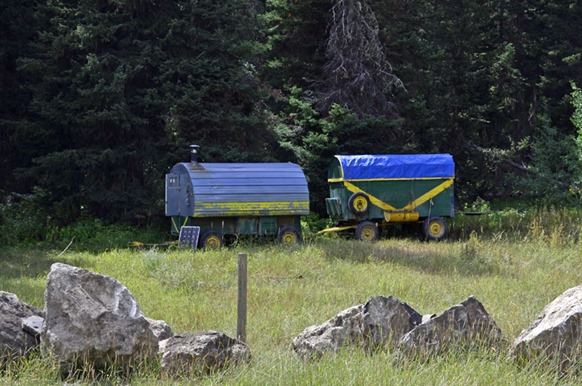 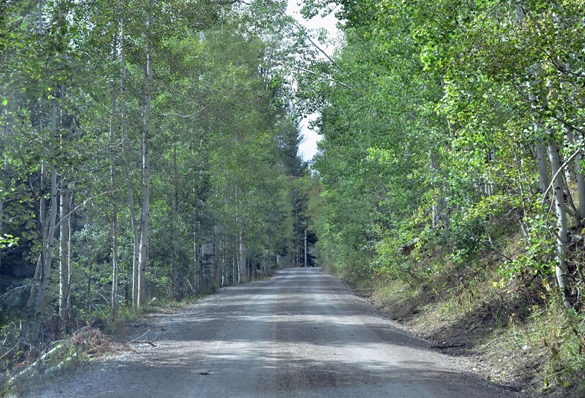 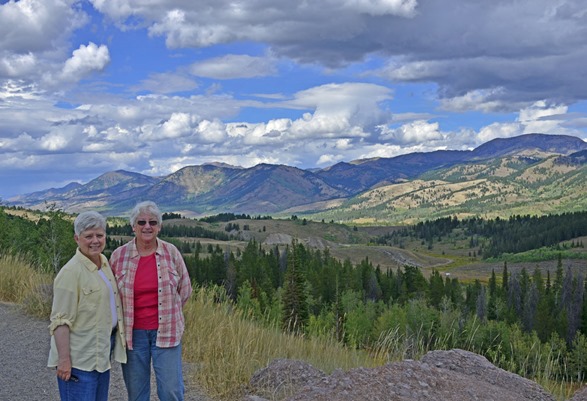 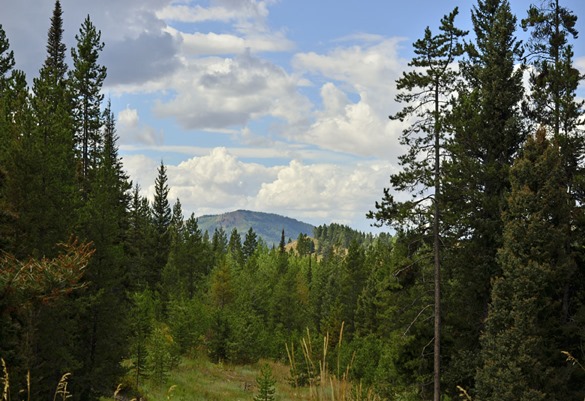 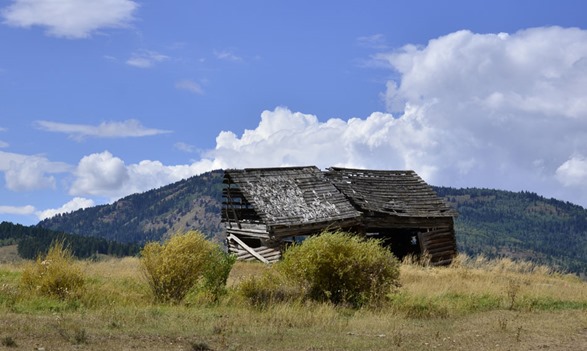 Driving down to Afton one evening for dinner, Brenda suddenly yelled “Moose!”.  Sure, we thought…..but lo and behold, there was a moose running along side of the road!  We turned around to get a closer look and saw that he was a handsome young bull: 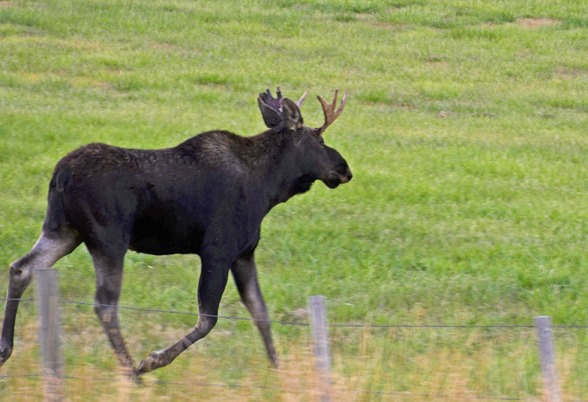 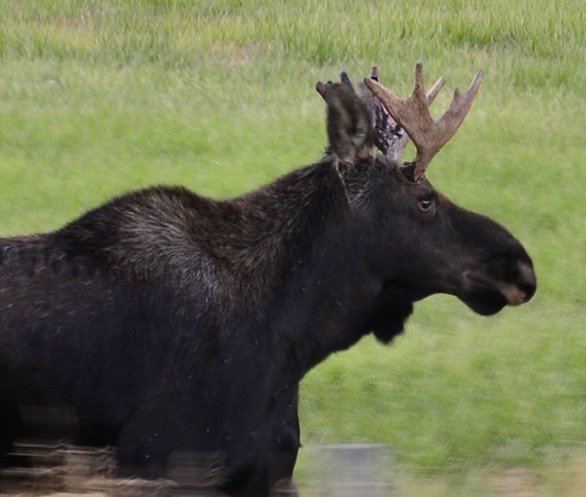 We had dinner that night in Afton, a town that leaves no doubt that you’re in Wyoming’s wild west: 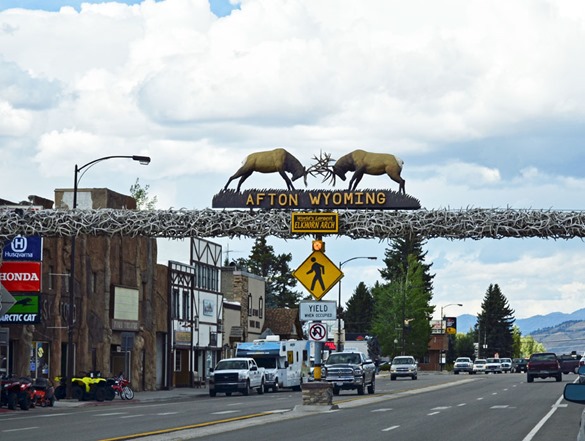 We always enjoy our time with Don and Betty, but the weather was getting colder and it was time for them to get ready to return to Arizona for the winter, and for us to head for Montana.

We always manage a visit to the Missoula area when possible to see the friends we made while volunteering at the Lee Metcalf National Wildlife Refuge.  So after spending a few days visiting Idaho Falls, we headed up I-15 to Dillon.  On the way, we passed through an area of early snow in the mountains: 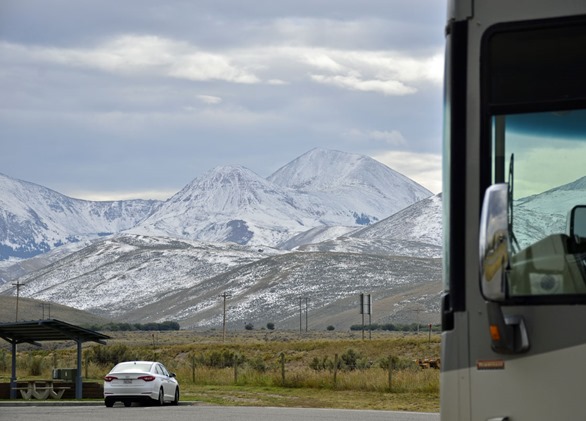 In Dillon, we came across this old or made-to-look old saloon with the mountains in the background: 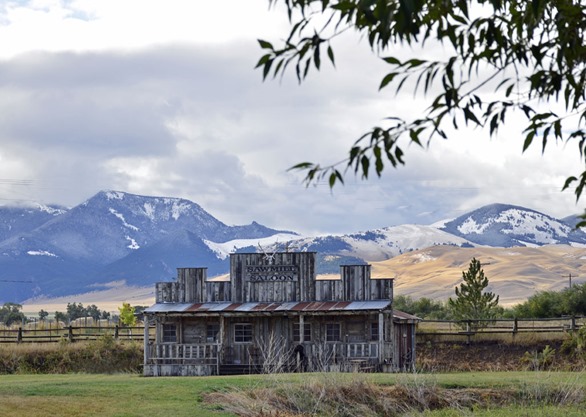 From Dillon, we drove through over Big Hole Pass, across the valley, and over Lost Trail Pass down into the Bitterroot Valley.  The valley has been hit hard this year by wildfires, and we were fortunate to arrive just after rains had dampened the fires and reduced the smoke.  The mountains have a light dusting of snow, but smoke is still in the air and small areas of wildfire are still visible: 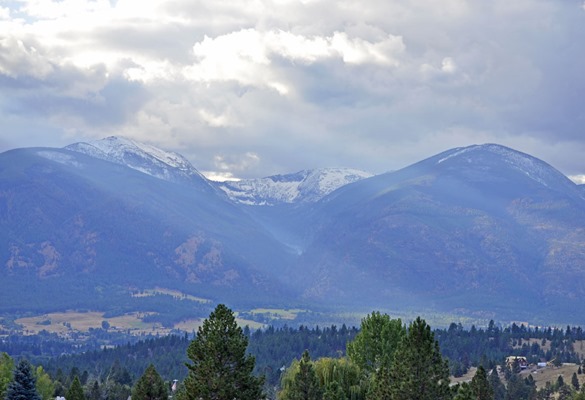 We spent a week here visiting friends and enjoying the area.  Since then, we’ve headed west over Lolo Pass and traveled down into the Clearwater Basin.  It’s an interesting place, and we’ll be posting an update soon on our travels – so stay tuned!