Alamogordo and the Sacramento Mountains

We’ve come back to the Alamogordo area just about every two years – it’s a place we enjoy visiting and always find something new.  The usual response from our friends when we tell them where we’re going is whaaa?  But as you'll see, there’s plenty to keep you occupied.

We started this visit with a trip to the New Mexico Museum of Space History, an imposing building located high above the town. 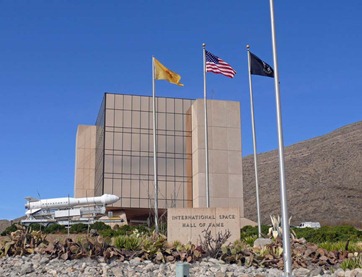 We’d never visited, and were surprised by the extensive collection of exhibits and interesting history displayed throughout the building.  After buying your ticket, you take an elevator to the top floor and work your way down, an easy way to tour the building.  Space exploration owes a lot to the work done by scientists at White Sands Missile Range located just down the road, and many of the original test vehicles are on display. 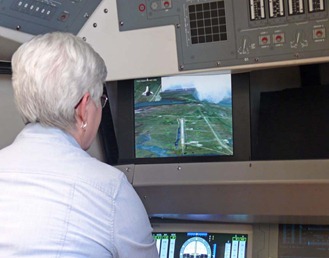 We had fun trying to master (unsuccessfully) the Space Shuttle Simulator.  It provided a fairly realistic experience of trying to land the shuttle at Edwards AFB, complete with shuttle controllers consoling you after you crashed and burned (“nice try, but let’s flare the shuttle next time so we don’t punch through the runway”). 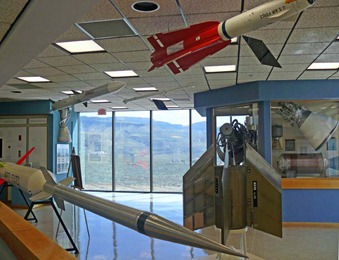 Along with lots of interesting items inside, the outside area has a number of interesting items, like the remains of a crashed V-3 rocket, a section of rocket sled, and various missiles and rockets.  And of course “Astronaut Ice Cream” in the gift shop.  A neat place, well worth stopping by if you’re in the area.

We always spend time in the Sacramento Mountains. 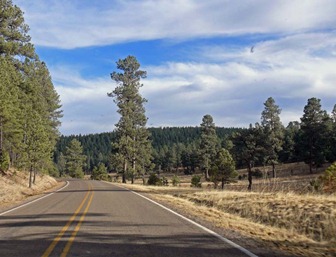 The tall pines, cool temperatures, and even a bubbling stream or two are a huge contrast to the desert below.  The small town of Cloudcroft is a gem, and we enjoy the drive from there to Ruidoso on highway 244, which meanders through beautiful mountain meadows and forest. 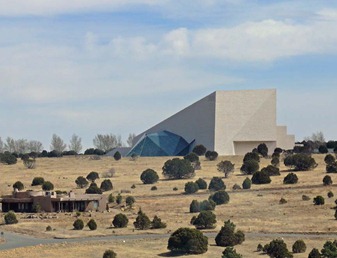 From Ruidoso, a bustling year-around resort town, we headed North, passing the impressive Spencer Theater of the Performing Arts,  to Fort Stanton,  one of the truly unique places that we’ve visited.  Originally a Calvary post, it 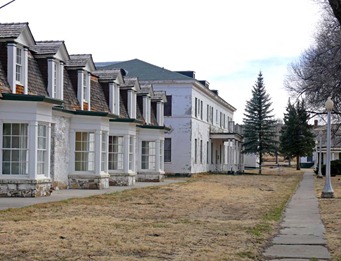 has served as a Merchant Marine hospital for tuberculosis patients, an internment center for WWII prisoners, and a state hospital.  Now a state monument, it’s an interesting place to explore. 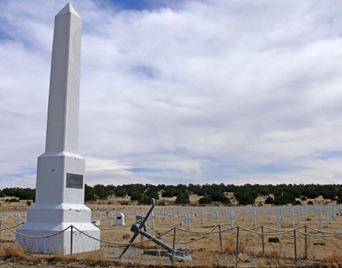 One of the surprising sights is the Merchant Marine cemetery complete with anchor and chain.  There’s a small museum where you can learn more about the fascinating history of this almost-forgotten fort. 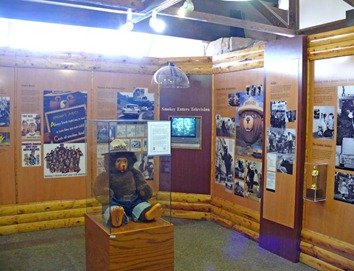 Continuing down the mountains, we stopped at Capitan, a small town and the home of the Smokey Bear Historical Park (notice that there’s no “the” in the name).  The park has a nice museum that tells the story of the little cub that was found after a fire, 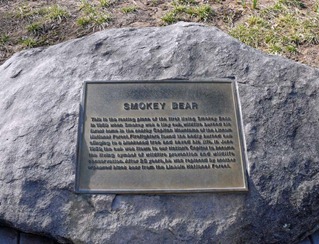 burnt and clinging to a tree, and how the Forest Service turned him into a symbol for fire prevention.  There are some interesting exhibits from the 50’s and 60’s, and in the attached garden, you can visit the gravesite of Smokey, where you learn that Smokey, as an official civil service employee, was retired after 25 years of service.  This is an interesting place to visit, and children especially will enjoy all of the interactive exhibits.

Up the road from Captian, we headed into the foothills of the Lincoln National Forest to the semi-ghost town of White Oaks. 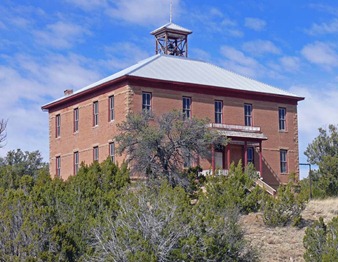 Once a booming town of 5000 souls, when the gold ran out, so did the people.  What remains is a hodgepodge of historic buildings, weather-beaten houses and mobile homes, a small museum, and the social center of town, the No Scum Allowed Saloon. 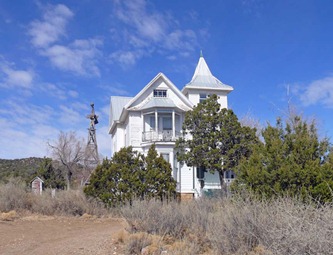 There wasn’t much of anything to see here at this time of year, and unless you’re in the mood for a cold beer at the No Scum Allowed, we can’t recommend going out of your way to visit. 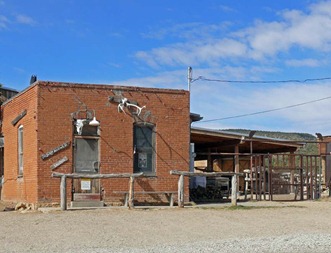 That’s it for this week, stay tuned for our next entry, the All-Billy-the-Kid Blog!

We’ve never spent much time in Roswell, NM, so on this trip we spent a couple of days exploring the area.  We found a pleasant city, with an upscale shopping area, lots of good restaurants, and some interesting sights.  When thinking of Roswell, most people think of the alleged alien spacecraft crash of 1947, an event that faded away quickly until around 1970, when the local Air Force base closed and the town lost fully one-half of it’s population.  Local businessmen brainstormed for ways to help keep the town alive, and so the great alien spaceship crash was resurrected.  Now each year, there’s an annual celebration, the Roswell UFO Festival, complete with alien parade, guest UFO lecturers, and fittingly, an Elvis impersonator.     Who wouldn’t want to attend and see the “Alien Idol Karaoke Contest”, the “Miss UFO Festival”, and learn about the “News that the government won’t tell you about!”.  Thirsting for more information, we headed for the center of it all, the International UFO Museum and Research Center, conveniently located in the heart of downtown.  After paying our $3 admission fee (I think we were 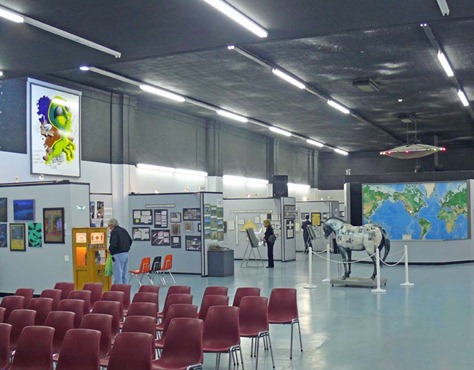 overcharged), we entered a world of faded newspaper clippings, bad artwork, and hokey displays.  My favorite was the “authentic” recreation of the alien autopsy,  where the alien looked like a preschooler’s silly putty creation that hadn’t been dusted in decades.  What a hoot! 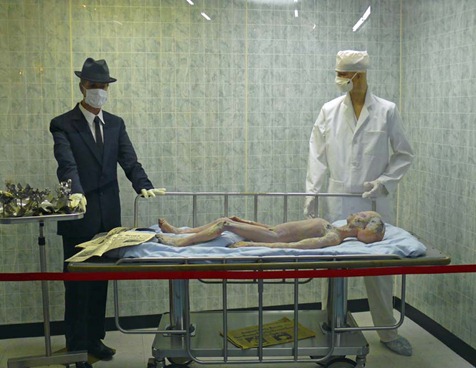 And don’t be fooled, the museum doesn’t limit itself to the Roswell “crash” – there’s exhibits on alien abductions, crop circles, and of course, Area 51.  But maybe the best part is the gift shop, where you can buy gifts that combine the best of New Mexico and aliens from outer space, like the red chili-alien Christmas Ornament – a must have!  I’m sorry if this offends the true believers of the Roswell story, but for me, it’s just that – a story.
On a much more serious exploration, we journeyed to Fort Sumner to visit the Bosque Redondo Memorial, which commemorates the site of a million-acre Indian reservation. 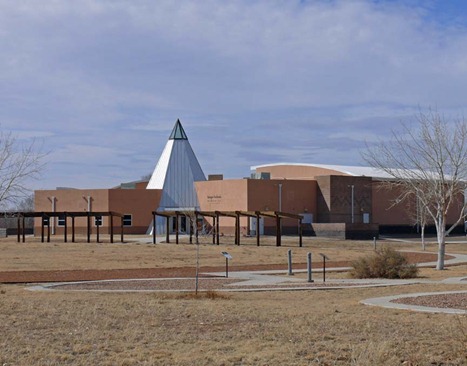 To get here, over 8000 Navajos were marched as far as 450 miles during a harsh winter in 1863, and kept here until 1868.  The memorial, a beautiful building built to resemble an Indian Teepee, has a nice visitor center and interpretive trails that wander through the cottonwood trees.  The story here is another example of how poorly native Americans were treated and the memorial is worth the trip to see. 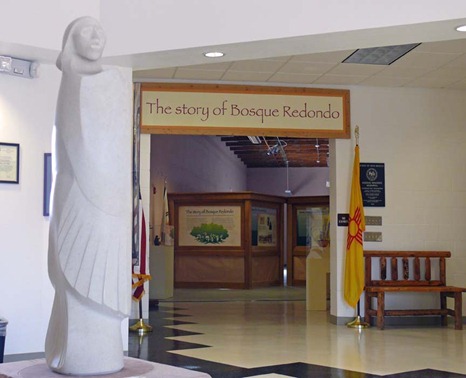 As we were driving into town, we noticed the tails of large aircraft at what was once Walker Air Force Base, which closed in the late 60s.  Taking a trip for a closer look, we were amazed at the number of wide-bodied airliners parked on the ramps.  B-747s, DC-10s, L1011s, even a few A-300s were there, many of which had their engines removed and some which were obviously being cannibalized for their parts.  Driving through the old base, it was 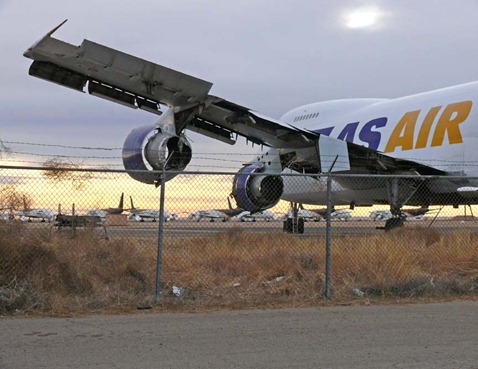 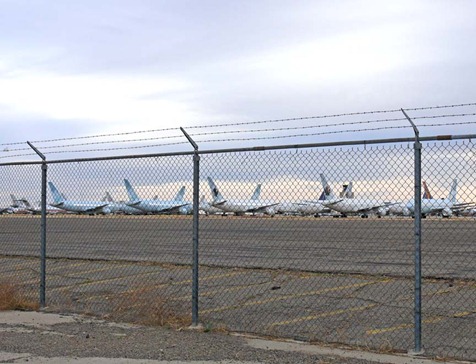 interesting to see how some of the identifiable base buildings had been turned into a college campus, a medical clinic, and business offices.  It’s always sad to see what was once a vibrant facility become a semi-deserted place like this, but at least it’s serving the community and the old base housing provides a home for low-income families.
We’re in cowboy country, so stop back and read about our travels on the Billy the Kid Trail!
Posted by DNPC at 8:35 PM 4 comments:

On the Road Again

It’s that time of year when we say goodbye to our Guadalupe River home and head North to our summer adventure in the Black Hills.  After a day spent getting the motorhome a wheel alignment and oil change, we were finally ready to hit the road.  Our first stop was at Fort Stockton, a dismal waypoint on I-10, where we spent the night at a surprisingly good RV park before heading North to Carlsbad, New Mexico for two nights.   In Carlsbad, we explored Brantley Lake State Park (big dam, little water), checked out the “Riverwalk” (nice park), and of course, spent a day at our reason for stopping, Carlsbad Caverns National Park.
We first visited Carlsbad Caverns when we lived in Tucson during the early 70s, and have always considered it the gold standard of caverns.  We had, however, forgotten that things change in 35 or so years.  They must have made the ramps and walkways steeper and the trail through the caverns longer since our last visit.  Tours through the main cavern trail and “Big Room” are now self-guided, and at the starting point we scoffed at the large signs stating “warning – strenuous trail ahead” – after all, it was all downhill, right?  Right.  After two hours of steep downhill trail, toes crammed into the front of our shoes, calves aching, knees straining, we finally made it to the “Big Room”, 800 feet below the surface.  Don’t believe it’s tough?  Try descending and 80 story building, in semi-darkness, with water on the steps making things slippery.  But we made it, and oh, what a trip it was!
We opted for the 1.25 mile self-guided tour from the “natural” entrance.  This is the where the cave was first discovered, as early settlers watched millions of bats leave the cave each night.  Looking down into the entrance gives you an idea of how the trail will look inside the cave; lots and lots of switchbacks as you descend. 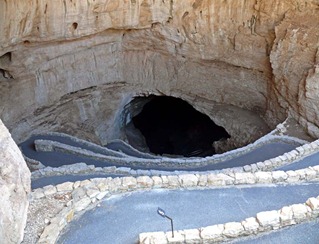 The caverns are immense – the ceiling soars hundreds of feet above you in places; it’s difficult to convey the size of the caverns in photos.  Just inside the entrance, millions of Mexican Freetail Bats roost during the summer, but on our visit the entrance area was home to hundreds of Cave Swallows, chirping away in the dark.  The caverns were once mined for the bat guano, a terrific fertilizer, in places up to 40’ deep,  The mental picture of how many bats it took to create 40’ of droppings is scary.
Once inside the caverns, we looked back at the entrance to see how the light, penetrating the mist rising out of the cave had formed a blue cloud.  The mist, combined with the cave lighting, made an interesting image.  If you click on the picture to expand it, you can see the railing of the trail winding into the entrance to get an idea of the huge size of the cavern. 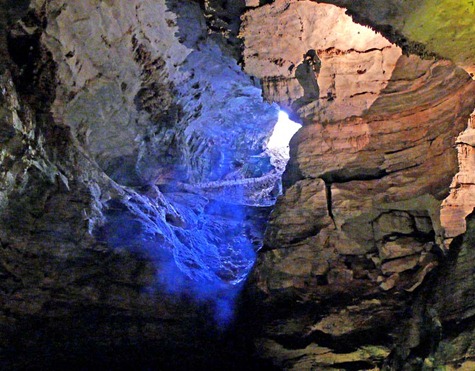 As we continued down into the cavern, there were interesting formations along the trail.  One, the “whales mouth”, provided an interesting contrast to the darkness around it.  Further down, a pond with two pillars, or stalagmites, provided an interesting contrast.  We traveled through narrow passages, open rooms, all the while amazed at the size and beauty of the formations.  Amazingly, we had the trail to ourselves, which made us wonder if we were the only ones crazy enough to take this route. 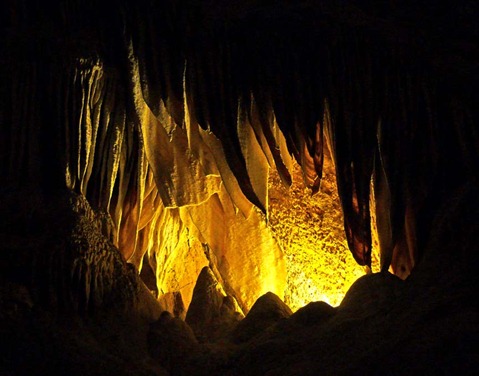 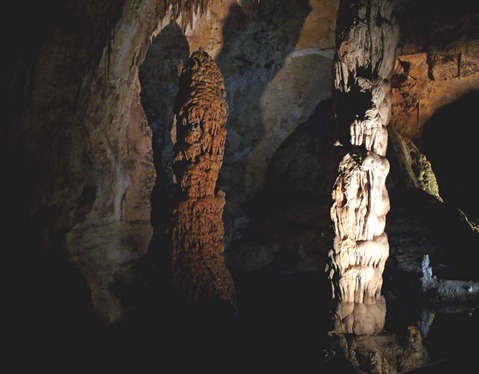 As rooms opened up, we were treated to amazing scenes of rock formations and sculptures…. 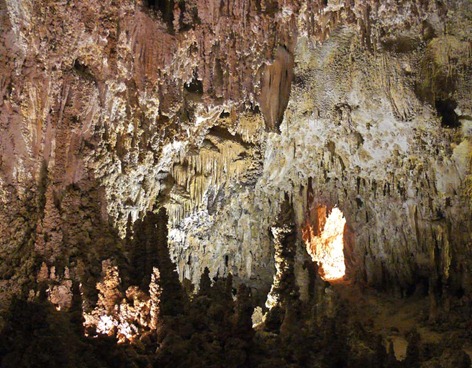 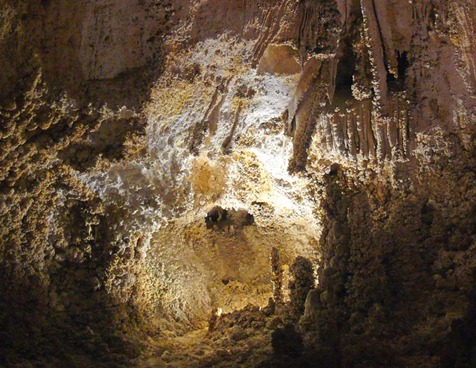 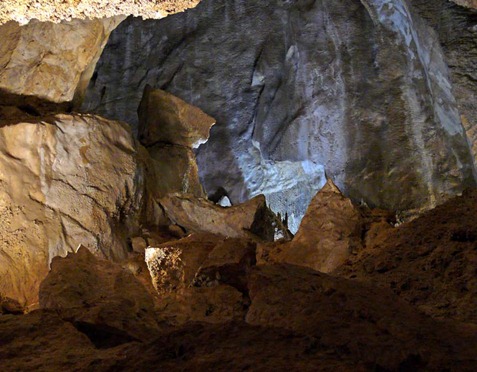 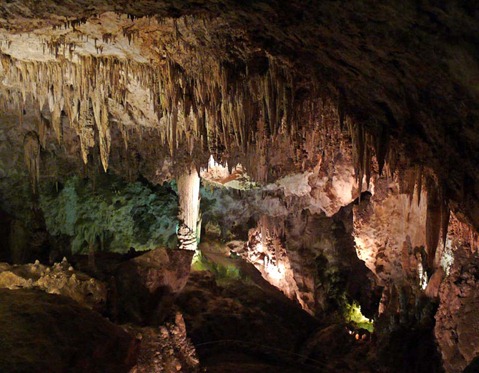 Eventually, we made it to the Big Room and the elevators to the surface.  Although we had originally planned to continue, sore toes and aching legs said “enough”, and we opted for a ride to the surface and a lunch at the visitor center cafe.
If you’re ever in the area, don’t miss this park, it’s a one of a kind wonder that you’ll always remember.  We’ll be back some day to take the Big Room tour and hopefully one of the Ranger-guided tours some day.  For now, we’re headed north again, this time up to Roswell for a short stay.  Come back and see how we’re doing!
Posted by DNPC at 6:45 PM 1 comment: