From our first day in Spearfish, back in early May, we were warned about what to expect during the Sturgis Motorcycle Rally in August.  Buy your groceries two weeks before, people said.  Don’t plan on driving in the Black Hills, they said.  Don’t even try to visit a restaurant, they said.  And they were right.  But it wasn’t at all what we expected. 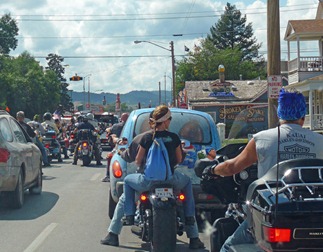 First, some observations.  Imagine moving the entire population of Sacramento, California to a small town of just over 6000.  Yup, this year’s rally estimate of people in Sturgis is 467,000.  Then add another 100,000 or so in the surrounding areas.  Suddenly I-90, usually quiet, looks like the Washington Beltway at rush hour, only with motorcycles.  Supermarket shelves are half-empty, and prices are up 20% or so.  New menus appear at the usually reasonable restaurants, and gas prices inch upward.  An RV spot with water & electric hookups in the middle of a field – $85.  A room at the Econolodge – $180.  But the rally is all about the people, and what a show it was. 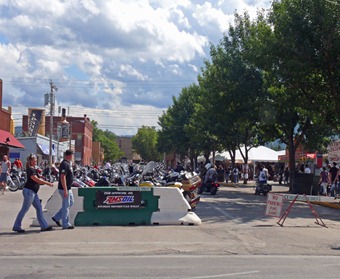 If you haven’t been to the rally, you probably have a mental picture of thousands of lean, angry-looking bikers, with their youthful, tanned and tattooed babes on the rear seat…..well, not exactly.  Instead of Hell’s Angels on Wheels, think AARP on Trikes.  We began to realize that most of these folks were inspired by Eric Von Zipper and the Ratz back in the “Beach Party” movies of the early 60s.  With the age of the men in today’s rally, Eric Von Zipper’s “the finger” gesture has an entirely different meaning.
Our park in Spearfish catered to the less-than-hard-core crowd, and we watched as motorhomes, toy haulers, and large SUVs pulling trailers unloaded their cargo of shiny Harleys, then as the owners donned denims, tied scarves around their heads pirate-style, and roared off to the rally.  Although the rally attendees think of themselves a rugged individualists, in fact, they all pretty much look the same.  As a local resident wrote in a letter to the Rapid City newspaper, “Sturgis is like a big Halloween party where everyone is wearing the same costume”. 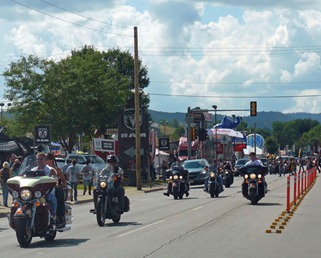 But it isn’t all geriatric tranquility; there was a knife fight between two outlaw gang members, four fatalities due to accidents, a tad over 250 DUI arrests, and one drug overdose (reportedly Metamucil).  OK, I made that last one up.  Still, it’s impressive that so many people can get together with copious amounts of alcohol, huge entertainment venues, and pasty-wearing women without more mayhem taking place. 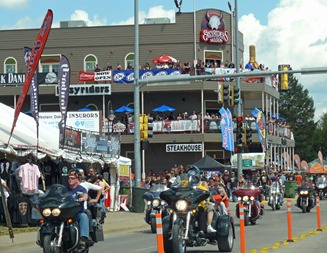 Surprisingly, you can actually drive through Sturgis during the rally, although it’s at a very slow pace and akin to driving down the midway at a carnival.  Vendors everywhere, bars overflowing, and an occasional young lady with nothing above the waist except pasties or an airbrush painting, since the local law requires that they have “some” type of covering.  One can only hope that the Sturgis town council will get over it’s puritanical rules. 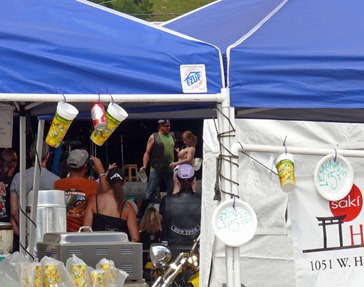 During one stop, I was fascinated by the lemonade stand with the signs advertising  “Lemonade – $5.00”, although Brenda accuses me of taking the picture of the underdressed girl in the background.  I explained to her that it was only fair to capture the image of the young lady after she had won such a grueling athletic event.  After all, those wet t-shirt contests can be exhausting. 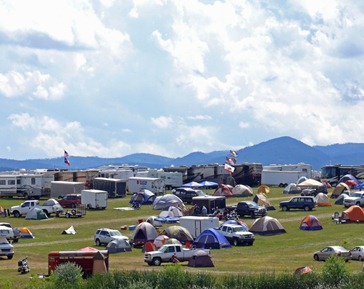 We took a trip out of town to the famous Buffalo Chip, a huge campground that becomes a city during the rally.  Thousands park here, and the nightly entertainment line up is amazing.  You can see an aerial photo here. 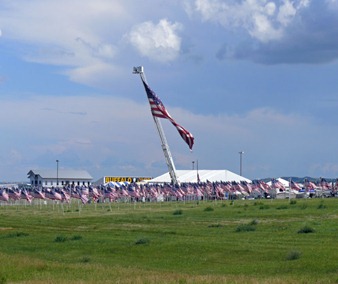 At the entrance, we stopped to look at the Patriot Flag; a huge tribute flag mounted on a fire truck and surrounded by smaller flags.  Tents, RVs, and motorcycle riders were everywhere – probably not a place to get a good night’s sleep.


Sturgis, no surprise, has a number of “biker bars”, many of which are closed except for the rally.  All have colorful names, like “Knuckles”, “One-eyed Jacks”, “Temporary Insanity”, “Loud American”, and “Full Throttle”. 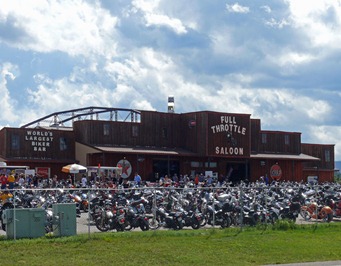 All have full parking lots throughout the rally – I’d love to see a statistic on how much beer is shipped to the area during the rally.  As you can imagine, security is a big issue during the rally.  Throughout the state, law enforcement personnel schedule their vacation time to coincide with the rally so that they can serve as temporary officers.  Groups of two or more police are everywhere, and on the interstate near Sturgis it’s a rare day when you don’t see three or more highway patrol vehicles.  Considering the crowds, the alcohol, and the free-wheeling atmosphere, the no-nonsense attitude of law enforcement in the area makes sense, and for us non-rally visitors, is much appreciated. 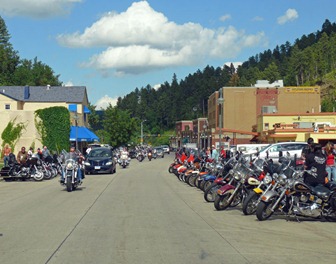 We took a ride through Deadwood, which is a popular place for bikers during the day.  I talked to a local who works in a Deadwood casino and was surprised when she told me that it was quiet at night, as the biker crowd headed for the Sturgis entertainment venues.  Still, it was interesting to see the bikes lined up along the main street in contrast to the old buildings. 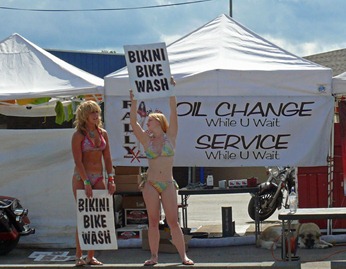 Finally, no trip to the rally would be complete without checking out a “Bikini Bike Wash”.  I eagerly looked for a bike to rent so that I could help out these young ladies, but the only bike anyone would rent me was a 10-speed Schwinn.  Besides, that big dog sleeping under the table looked mean.
We’re glad we were here to experience the rally – it’s a one-of-a-kind event!  But it reminds us of a saying we learned in Japan, “a wise man climbs Mount Fuji once, only a fool does it twice”.  We’ll try to avoid being in the area in the future, it’s just too painful.  Although, I am considering taking classes in “airbrush art”, after all, the additional income during the rally would contribute to Brenda’s casino fund.
We’re off to the Escapee’s rally in Gillette, Wyoming, where there’ll be more while-haired people than at a Golden Corral Senior’s Night.  Thank heaven there won’t be a Bikini RV Wash……..
Posted by DNPC at 9:08 PM 5 comments: 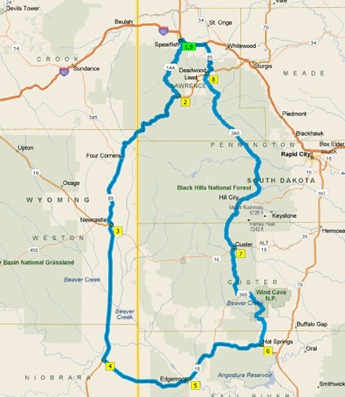 We’re preparing to leave the Spearfish area, but before we departed, wanted to take one more road trip through the Black Hills.  We headed up Spearfish Canyon to Cheyenne Crossing, then headed across the border toward Newcastle, Wyoming.  Our drive took us through the heavily-forested mountains, through the foothills, and finally into the rolling grasslands of eastern Wyoming.  We stopped at Newcastle, a town of 3000 and billed as the “Western Gateway to the Black Hills”. 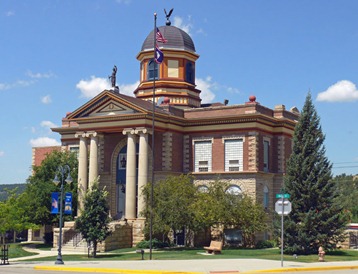 Driving around the town, we noticed the exceptional county courthouse, but frankly, the rest of the town was mostly industrial with an oil refinery right in the center of everything.  We continued on, through beautiful rolling hills and ranchland and turned back into South Dakota, headed for Edgemont.  We’d read in the South Dakota magazine about pictographs in an area just outside of town called Red Canyon, and decided to take a look.  Finding the canyon road, we followed the gravel road through spectacular scenery.  There were abandoned ranches, interesting rock formations, and a few drawings on the rocks of what may have been pictographs (or maybe cowboy graffiti).  It was a beautiful drive, and here are some of the sights we saw along the way: 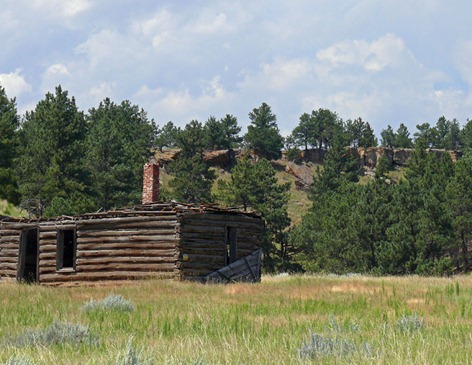 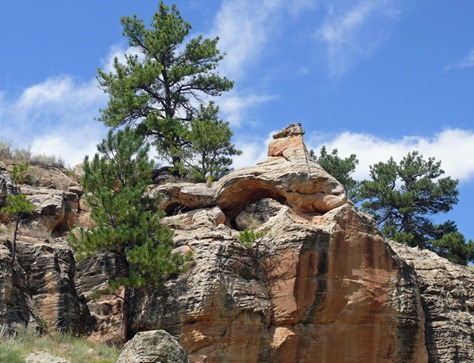 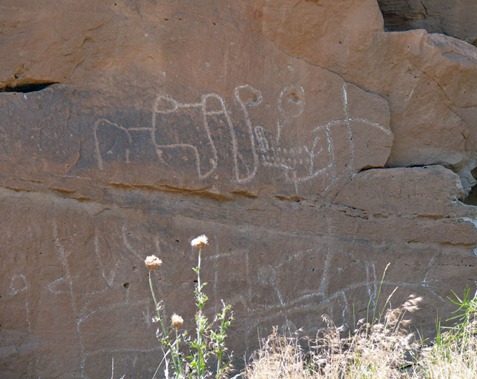 From Edgemont, we headed north back into the Black Hills, climbing back into forest and open areas with numerous prairie dog villages.  We stopped in Hot Springs, the first tourist town in the Black Hills.  With it’s beautifully maintained sandstone buildings, shops, and yes, hot springs, it’s a place we enjoyed visiting and will return to.  The visitor center, formerly the train station, was staffed by a delightful lady who told us about the colorful history of the area, and we were intrigued by the adjacent wooden jail, which was discovered inside a house.  No one knows why it was inside, but we suspect that the family had teenagers….wish we had thought of that!  Hot Springs is truly unique; set in a beautiful area with interesting things to do – more so than the traditional tourist towns of Custer and Keystone.  Here are some images of our visit: 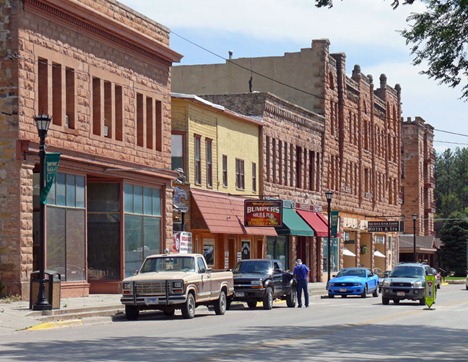 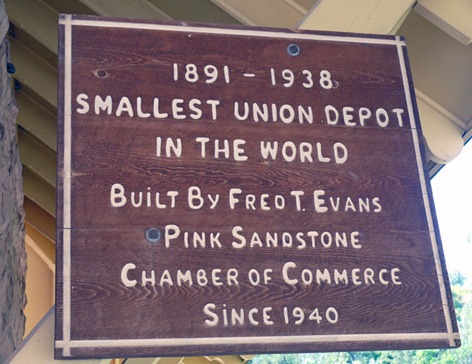 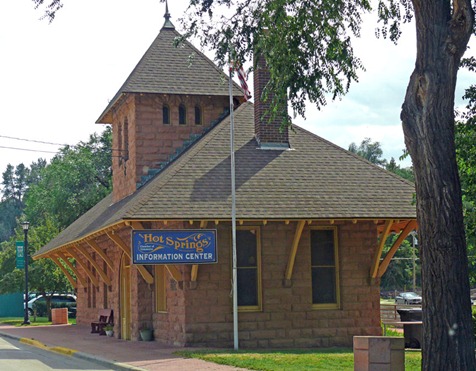 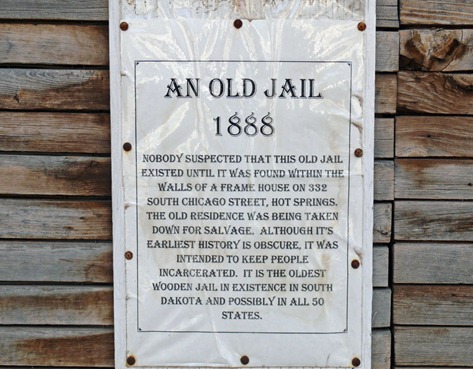 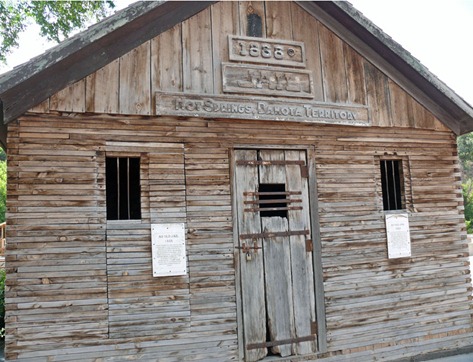 It was a long day, almost 250 miles, but well worth it.  One thing to remember when visiting the Black Hills is that this is not a small area; it extends almost 120 miles north to south, and 60 miles east to west.  And there’s also Devil’s Tower, the Beartooth Mountains, the Badlands, and Rapid City to explore.  We’ll definitely need a return trip to see everything we’re interested in!

Back in Spearfish, we were disappointed to learn that our volunteer coordinator, Renae, was leaving.  Renae is an exceptional young lady who impressed us with her organizational and interpersonal skills.  Just keeping all 20 of us senior citizen volunteers happy and motivated was a monumental task – but she succeeded and we’ll miss her smile and positive attitude.  We had the opportunity to have a farewell pot-luck at our volunteer village for her where we sent her off with our best wishes and hopes that we’ll see her again.  She’s a great young lady; we’ll miss her! 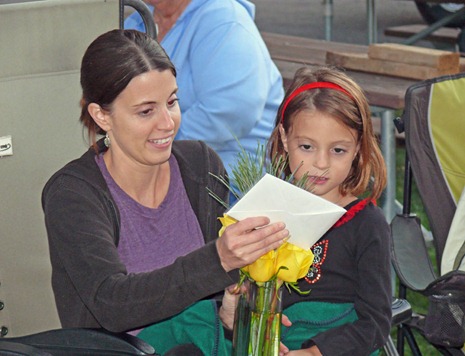 The Sturgis Rally is approaching, we can’t wait to see what happens when the estimated 600,000 bikers hit the area – c’mon back and see!

A Good Time in the Bad Lands

We’re back to posting about our travels, but first I’d like to thank all of you for the comments.  Sometimes it’s fun to describe the loony things that happen to us as we travel along.  By the way, I’m still depressed over being told by the cashier; “Oh, YOU’RE the one”.  But on to our travels:

South Dakota is an amazing state.  If you haven’t been here, you probably think of South Dakota as endless prairies, the place where the bikers congregate, and the Black Hills.  But it’s a lot more – from the Eastern rivers, lakes, and farms, the central “great” lakes area, and just east of the Black Hills, the Badlands National Park. Turning south off I-90 just east of Wall (just how many billboards can one store have, anyway?), the area quickly changes from rolling grasslands into something that looks like another planet – in fact, science fiction movies like “Starship Troopers” were filmed here because the landscape is often alien-looking.  Some areas are full of rocky spires, some of wind-carved sculptures, some pink, others red….it’s an amazing area that changes as you come around each turn in the road. 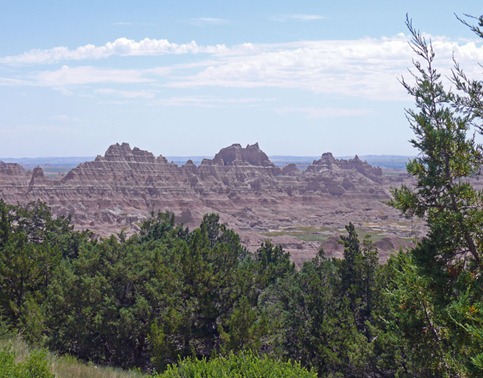 For almost 30 miles, the park road winds it’s way through the rocks.  There are numerous viewpoints to stop at, hiking trails, and an informative visitor center.  It was a hot day when we visited, and if it’s hot in South Dakota, it’s really hot in the Badlands.  So, no hiking for us, just stops to admire the scenery.  Here’s some of the views along the road: 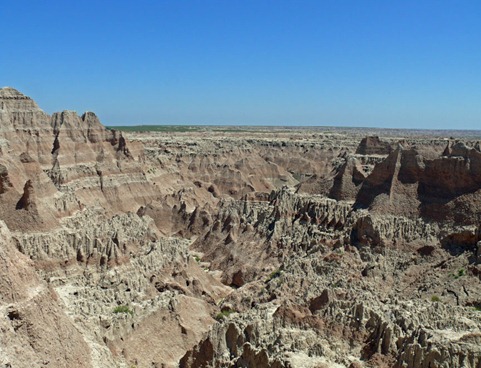 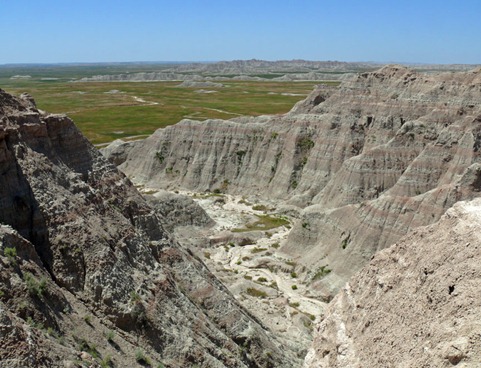 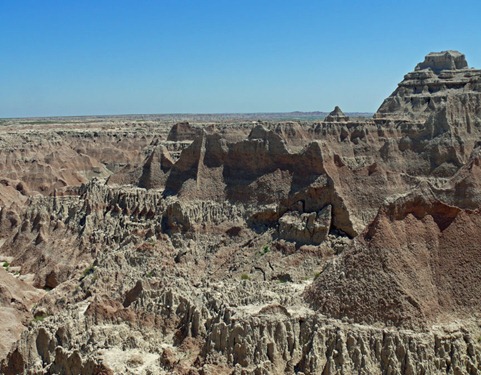 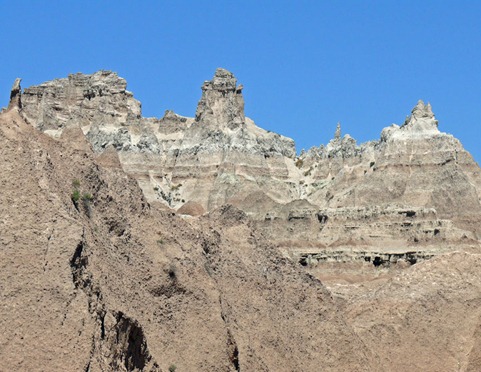 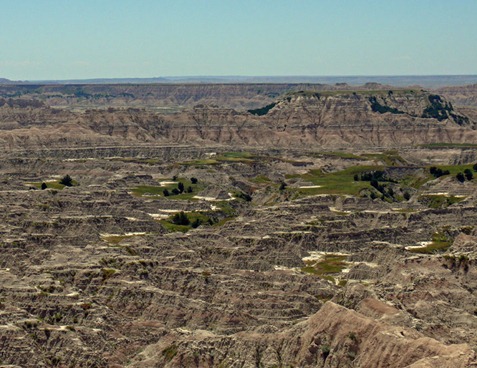 Exiting the Badlands, we passed through the town of Scenic, which has been in the news since the entire town (population 8) is up for sale.  The 12-acre town and all the buildings are priced at $799,000, and after seeing the place, we can tell you that it’s waaaay overpriced!  Calling this place “Scenic” is just a bit of a stretch!
We’re winding down our stay here in the Black Hills, but we’ve still got a few places to see, so check back – you never know when I’ll have another “dining adventure”!
Posted by DNPC at 10:28 AM 4 comments: