At home in Benson, Arizona

We're back in our winter location at the Cochise Terrace RV Resort in Benson, Arizona, where we'll stay until at least late March. We chose Benson because of it's location; 35 miles to Tucson, 30 miles to Sierra Vista, and equidistant between the Chiricahua and Pinaleno Mountains, two of our favorite place to visit and explore. Cochise Terrace is a nice park that's unusual in this area because it is all RVs, no park models, sheds, carports, etc. Walking through the park is like exploring America; there are license plates from everywhere, although the majority are from Michigan, Wisconsin, Illinois, and other states in the upper Midwest. It's very well maintained by a large staff of workampers buzzing around on golf carts, and because it sits above Benson and the train line, is usually pretty quiet.
On our way here we took time to stop in Columbus, New Mexico and learned about the last invasion of the US by an armed force. Just before dawn on March 9, 1916, over 500 armed Mexicans, known as "Villistas"because of their allegiance to Pancho Villa, crossed the border and attacked the town. After looting residents and burning much of the town, the Villistas were turned back by a military garrison leaving 18 residents and military and over 100 Villistas dead. After the attack, a large force was assembled and pursued the Villistas into Mexico. What is interesting about this event is that the resulting retaliatory force led by General Jack Pershing became a test and training event for American forces about to enter WWI, and that for the first time mechanized vehicles and aircraft were used in a combat action. Today, a state park and museum are situated on the site of much of the attack, and markers show where some of the "firsts" were located. While the first "grease rack" isn't very exotic, it was interesting to think of the thought that went into its construction. Perhaps the employees of Jiffy Lube make pilgrimages here. 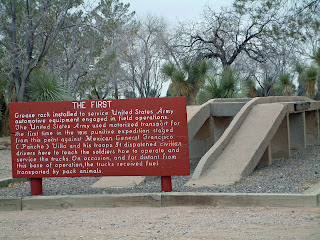 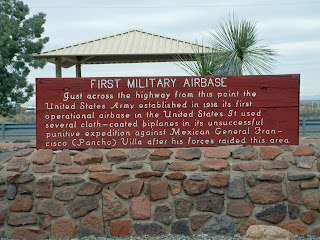 The first operational air base was located here also; it shows that the tradition of putting an air base out in the middle of nowhere didn't start with the Strategic Air Command in 1947. There isn't much left of the original town; what wasn't burned during the raid has long been torn down or burned later. The remaining town is pretty austere; one or two stores, a few houses, and the border crossing. This is one of those places where you wonder what brought people here in the first place, and what would encourage anyone to stay today. An interesting visit though, and worth the trip.
Back here in Benson we've been busy visiting old friends and making new ones. We've had a great time hiking and exploring with our friends Bob and Trixie Berry who are staying here also. We hiked the trail to Ft Bowie National Historic Site (see last year's post), visited Cochise Stronghold (ditto), and this week drove to a very remote state historic site, the Slaughter Ranch. The ranch, located on a dirt road 15 miles east of Douglas Arizona, is literally a stone's throw from the Mexican border and an oasis in an area of dry grasslands and mountains. 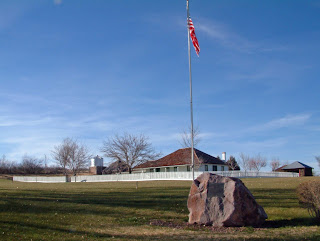 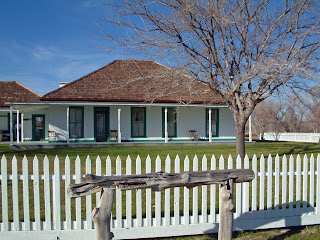 lawman in the days of Wyatt Earp, the Clantons, and Pancho Villa is fascinating; he was a feared and respected individual who raised a family and built a ranch on 65,000 acres with as many as 150 ranch hands. All this from a man who stood 5 feet 3 inches in his stocking feet and wore a size 4 shoe.....I guess Colt really did make the man. Today the ranch has been restored and is open for tours. What makes the trip really interesting is that the camera was becoming popular and the family took lots and lots of pictures. To be able to look at life on the ranch in pictures and stand the same ground in the photographs today is a memorable experience. We'll be exploring more of the history in this area in the coming weeks - please come back and check on us!
Posted by DNPC at 9:36 AM No comments: