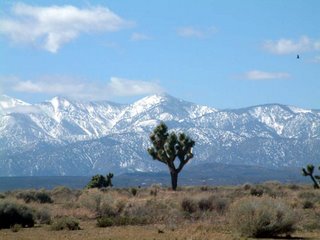 While in Hesperia, we were surprised by the sight of fresh snow in the mountains and the snow and ice on Cajon Pass. It truly was a beautiful sight on the horizon; unfortunately, Hesperia and Victorville remained brown, dry, and windy. Looking for some exercise, we drove to the Devil's Punchbowl state park & hiked the trail; very steep for the first mile, then fairly level into the tree line (and snow). The area is interesting in that it is where two fault lines, the San Andreas and Pinyon, collide and have formed unusual rock formations. We were well into the forest and snow, although comfortable in the sunny and warm weather. 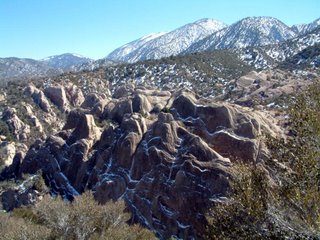 While in the area, we visited the former George AFB, which was once the training base for the F-4 Wild Weasels. The flightline area is being used by a number of aircraft maintenance firms; a number of B-727s and RJs were parked there, along with a few dozen MD-80s & DC-9s parked on the far side of field, apparently in dry storage. There are still a number of buildings with 35th FW markings, and other buildings, such as the officer club and gym are still intact but vacant. It was disappointing to see the base housing area, with what was fairly new housing, vacant with the windows broken, trash strewn around, etc. It's too bad it's going to waste since the area (Adelanto) is pretty depressed. Our next stop was Edwards AFB, to stay at the FamCamp and meet with our friends Kirk and Sue. Edwards AFB is the perfect place to test aircraft, since anything falling from the sky will have little discernable impact on the desolate landscape. 30+ miles from Lancaster, the base combines an unusual combination of 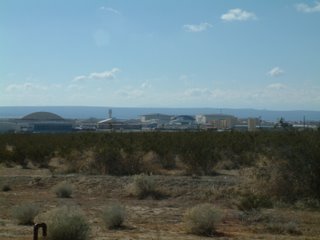 mediocre facilities and miserable weather to rank it right up there with Altus as my worst locations in the Air Force. Kirk and Sue's arrival helped ease the pain, and we enoyed catching up on the news of Dayton and friends, and we took a day trip to Lone Pine and the Mt. Whitney area. Although the mountains were cloud and snow covered, we had a great time touring the area, particuarly seeing the sites where many movies and old TV shows were filmed. The area was used as the backdrop for many of the old westerns, like the Lone Ranger, but was also a stand-in for the Khyber Pass and other far-away areas. Gunga Din, Lives of the Bengal Lancers, and Charge of the Light Brigade were also filmed here. 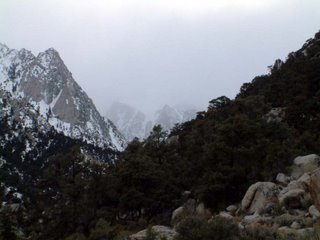 We also stopped at Red Rock Canyon State Park which has some interesting rock formations and a great campground. Leaving Edwards, we traveled through Tehachapi, Bakersfield, and settled in at Camp Roberts, near Paso Robles for a few days. 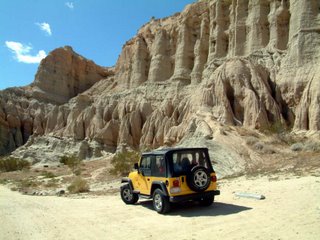 From Camp Roberts, we toured the wine country, tasted & bought some local varieties, and made a trip to Cambria and Morro Bay for the day. 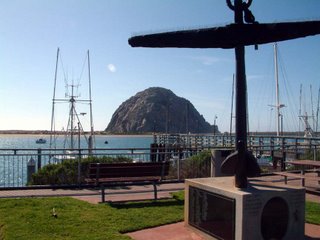 Leaving the wine country, we headed north on Highway 101 for a night in Gilroy, the garlic capital of the world and an obilgatory trip to the San Martin Camping World store. We left Gilroy at 0730 on Sunday morning to beat the traffic though the San Francisco and Oakland area, and are currently in Willits, a small town at the south end of redwood country. Tomorrow we're off again, this time to Klamath, a very small town (pop 600) on the Klamath River in the heart of redwood country where we'll spend a week or so exploring. Until then, thanks for checking on us & keep in touch!
Posted by DNPC at 9:46 PM No comments:

After two great months in Southern Arizona, it was time to head to Southern Cal and visit with our daughter Kim and her fiance, Bill. Before we left, we managed to return to the Shake Trail at the foot of Mt. Graham for a late-day hike, and were treated to fresh bear and very, very large cat tracks on the trail. As the sun went down and dusk settled in, it was easy to pick up our pace back to the Jeep since some of the tracks weren't there on our way UP the trail. We also visited Ramsey Canyon, located near Sierra Vista and managed by the Nature Conservancy, and one of the few areas with a flowing stream during the current drought. A one point on the trail, we were surrounded by a small heard of Mule Deer, all of which Brenda wanted to take home. 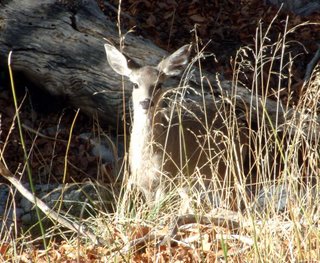 After one more visit with old friends Dusty and Mary Lou and Karen and Larry, we made one last visit to Pinnacle Peak and the 31-oz Porterhouse with our new friends and fellow full-timers Dennis and Ann. Leaving on Sunday morning, our first overnight stop was in utterly forgettable Tonapah, Arizona & the next night we pulled into a fairly nice riverside RV park in Needles, CA (another garden spot) to spend a few days. The next day we drove to Laughlin, NV to visit the casinos and help bolster the local economy, which we did with alarming success. No pictures, if you've seen one casino you've pretty much seen them all; Laughlin is only distinguished by its location on Colorado River and the large number of senior citizens (nothing wrong with that). Our second day we drove to Lake Havasu City, where in 1967 I visited my parents as they looked at and eventually bought property. We've visited over the years, and were disappointed to see that it has gone from a quaint town with a focus on the London Bridge area to just another sprawling desert community with too much traffic and lots of chain restaurants. On the way back, we drove through Oatman, AZ, a rebuilt mining town with lots of tourist shops and history. It's notable for the large number of "wild" burros that roam the streets begging for food. 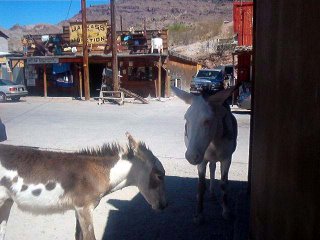 Surprisingly, Brenda didn't want to take any of them home.
We're currently parked in the Desert Willows RV Park, just outside the Los Angels basin at the base of Cajon Pass in Hesperia, CA. Not exactly scenic except for the snow covered mountains to the west. The weather has been unseasonably cool (60s) and breezy. Brenda has been spending time with Kim in the search for the perfect wedding site, and tonight they attended a taping of the "Ellen" show. I decided I'd rather baby-sit the cat and watch TV. I'm fascinated by the LA TV news programs; my favorite is "Accu-weather with Garth Kemp, brought to you in high definition!" As if there's a difference in viewing a blue-screen weather map in normal or "high definition". I'm sure my friends the weather professionals back in Dayton can appreciate the distinction, but we who are uneducated in the weather sciences pretty much don't see a difference. Now that we have the DirecTV mobile package, I'll be able to watch "Garth" and the LA stations no matter where we are!
We'll stay here until the 15th, when we'll head for Edwards AFB and see if we can get a spot at the Famcamp where we'll meet up with our friends Kirk and Sue from Dayton. After that - off to Paso Robles and wine tasting for a while. Keep in touch, we love hearing from you!
Posted by DNPC at 7:46 PM No comments: