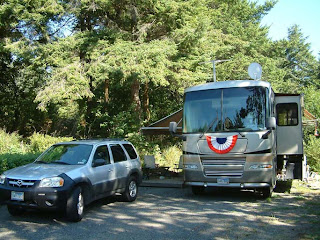 We've been having a great time here at Harris Beach State Park; we've learned more about seals, sea lions, and coastal plants than we ever thought possible. The park has quieted down some now that the kids are back in school, and we no longer conduct the Junior Ranger program. It was a lot of fun for us and the kids seemed to enjoy the activities. One of our favorites was the seals & sea lion class; we played a game where the kids became seals & had to face the perils of predators, food shortages, and people throwing rocks at them, and where we used lengths of 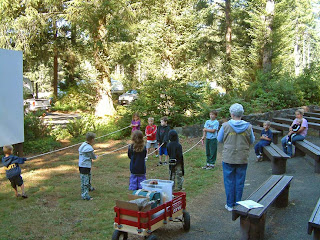 ropes to show the size of the different types of seals and sea lions. We're now conducting all of the evening programs, giving nature and wildlife walks, and presenting a PowerPoint show (Yippee!) on seals and sea lions of the southern Oregon coast. Thanks to intense training (and the magic of a volunteer vest complete with nametag), I'm able to show how the Queen Anne's Lace can be eaten as a wild carrot, a plant called "Self Heal" can be used to treat cuts and scratches, and how the leaves from a common Mullein can be used for comfortable shoe inserts. These things can become real important to us retired folks if the price of gas keeps going up. My favorite part of the nature walk is showing people the Cascara tree, a large shrub or small tree that is also known by the Chinook Indian name of "Chitticum". The previous host told the story about a camping trip with a girl scout troop; the first night they brought out the marshmellows and told the girls to go into the woods and get sticks. They did, they toasted their marshmellows and the next morning.....everyone had what we used to call the "green apple trots" and the line for the pit toilets was long and steady. As they found out, the bark of the cascara is a strong laxative; so strong in fact that when used commercially it had to be dried for a year before usable. By the way, the Chinook name for the tree is pigeon english......say it slowly...chit it cum......which is what happens if you ingest the bark!
The park is full of huckleberry bushes, and I've been picking them for cereal and pancakes. They're a wild blueberry and are delicious (Brenda thinks they're just OK). She prefers the blackberries that are also abundant, although they can be pretty tart.....like sour-lemon tart. We're also involved in reorganizing the Junior Ranger program, converting 35mm slides into digital photos, and the recycling program. In our off time, we've had the chance to do some exploring along this beautiful coast. We've made a couple of trips to Crescent City, about 30 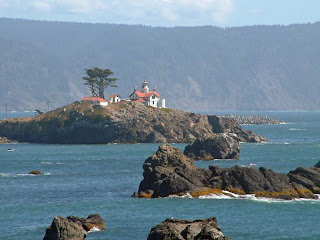 miles south, where the coastal redwood trees are huge and we can visit the nearest Wal-Mart. The area has a pretty lighthouse that can be reached at low tide and is the closest point to another interesting lighthouse, the Saint George's reef lighthouse.

This lighthouse was constructed following public outcry over the sinking of the steamer Brother Johnathon in 1865 and the loss of 225 lives and a fortune in gold. Constructed on the reef eight miles off the coast and finished after a 10-year period, it cost over $750,000, making it the most expensive lighthouse ever built in the U.S. at the time. Difficult to maintain and dangerous to those who manned it (waves from a storm in 1952 broke the windows at the 150' level), the lighthouse was decommissioned in 1975 and replaced by an unmanned buoy. It's still visible on a clear day, even from Harris Beach 16 miles away. Surprisingly, the wreck of the Brother Jonathon wasn't discovered until 1993 and over the years over $5 million in gold coins were recovered.
Taking a trip inland, we drove north to Gold Beach and turned inland along the banks of the Rogue River, 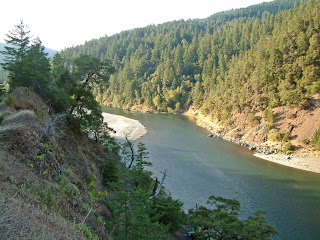 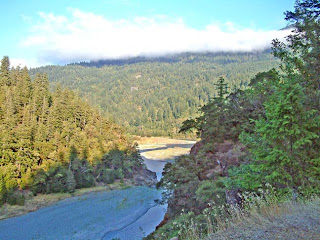 a beautiful and wild river that is a popular Salmon and Steelhead fishery, and is a popular tourist attraction for "jet boat" travel. The road wound around the river with some beautiful views, and eventually we came to the turnaround point, the tiny community of Agness, with it's unique sign. 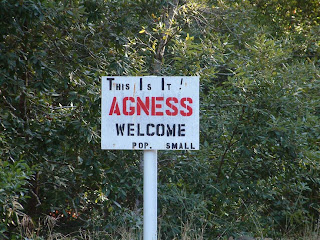 In Gold Beach, we finally found a boat that we could afford; unfortunately, it didn't seem very seaworthy. 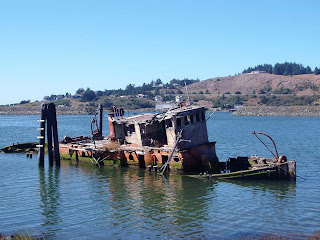 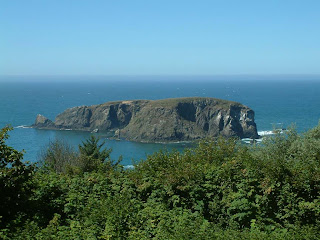 back, we stopped and took this picture of "whale rock", one of the many memorable rock formations on the coast. The largest island off the coast of Oregon is right here at Harris Beach SP, known as "Goat Island", it is only 21 acres. Local lore is that Mr. Harris, who owned all the land around the area, decided that placing sheep and goats on the island would be a good idea; there was plenty of forage and they would be safe from predators. What he didn't realize was that during the winter strong storms pushed waves up and sometimes over the sides of the island (remember St. George's Lighthouse?), and the sheep were washed off, or fell off the island in panic. Sheep, of course, can't swim because their wool becomes saturated. Goats, however, swim very well and promptly left the island for greener (and dryer) pastures; as a result, the area was plagued by a feral goat problem for many years. The island is quiet now, and during our stay all we've seen are brown pelicans, cormorants, and gulls nesting on the island. We've only two more weeks here and still have a lot to see, come back and visit!
Posted by DNPC at 4:04 PM No comments: