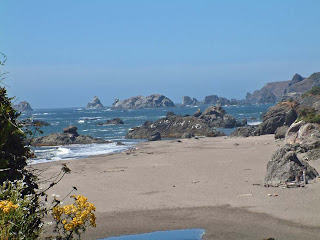 After a pleasant trip over the coastal range, we picked up highway 101 and headed south along the rugged Oregon coast to Brookings, Oregon and Harris Beach State Park. What a welcome change - after months of 90+ temperatures, the high here has been 75, and most days have been in the high 60s with nights in the 50s. The park, located right on a beautiful stretch of coastline, is one mile north of Brookings, a town of 6000 with a large harbor, good restaurants, and plenty of shopping opportunities (but NO Wal-Mart!). We've enjoyed visiting the Farmer's Market on 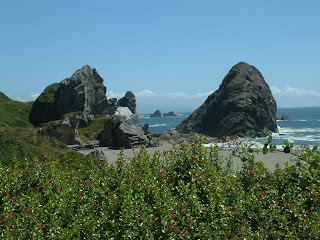 Saturday; the produce has been outstanding, and we've enjoyed fresh-picked blackberries (they're everywhere!). Although we haven't been yet, we understand that fresh fish can be bought off of the boats each day; tuna and salmon are being caught offshore along with a variety of rockfish and snapper. 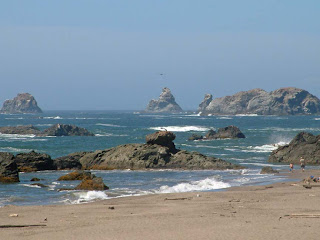 Surprisingly, it's rained only one day since we've been here and no rain is in the forecast for the next 10 days. Our only complaint is that without warning, sea fog rolls in and sometimes makes for a dreary day, although it can be beautiful in the morning as the sun's rays shine through. 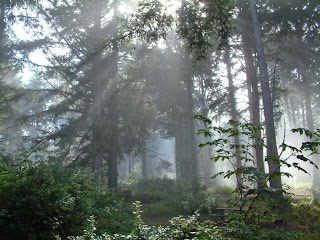 Five days a week, we conduct the "Junior Ranger" program, a one-hour program for children 6-12. The subjects are part of a state park curriculum; some of the classes are "Seals and Sea Lions", "Whales", "Oceans", and "Wildlife". The children are given an activity book which requires them to complete tasks during the day - they have to recycle, help clean their campsite, identify some plants, and follow the clues to discover a park "secret". At 5:30, we reopen the Junior Ranger yurt, review and stamp as complete their "passport", issue them the coveted "Junior Ranger" badge, and teach them the "secret sign". After three courses, they are awarded a certificate (suitable for framing), and a very nice embroidered patch. It's a really neat program for the kids and we've really enjoyed it. As you can imagine, Brenda is terrific at this. I sort of act as her semi-trained assistant and lug around the heavy props (ever tried to pick up a Gray Whale vertebrae?). We've already had some memorable moments, like the kid, who after being taught the "secret sign" and being sworn to secrecy, ran out the door to his grandfather and offered to sell it to him for ten bucks. Two nights a week I conduct an evening program, usually a one-hour walk through the woods and along the bluff overlooking the water. I had to cram to become familiar with the subjects; so far I've led walks to show people wildflowers, birds, and edible plants. Do you have any idea how much stuff grows in this climate? Fortunately, with my snazzy vest and hat, I become an immediate expert and no one seems the wiser that I'm making up facts as I go along.....well, maybe sometimes.
One of our favorite local plant is the Wild Fuchsia, which grows in large bushes 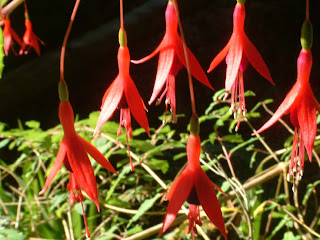 and is usually the home for a group of Anna's hummingbirds, which stay here all year. I show people how you can pull apart the blossom and taste the sweet nectar; with all the hummingbirds in the park, we hardly see any at our feeder because of these beautiful flowers. The park is filled with flowers and trees, campsites are large and separated from each other by hedges and brush, and sites have electric, water, and cable TV - and WiFi. We're in a secluded area near the park headquarters and are enjoying being able to open the windows and turn off the air conditioning.
This is a great area for whale, seal, and sea lion watching. We've yet to spot a whale, but haven't had the time to sit and spend time watching. There are brown pelicans, cormorants, and gulls everywhere, and we watched these sea lions in a local harbor. 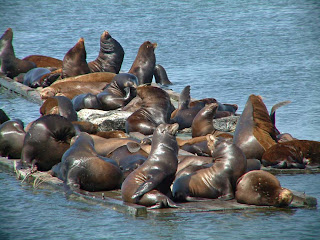 We're working a little harder than we'd like as we struggle to learn the local wildlife and plants, but we're expecting things to slow down after labor day and then we'll be out exploring. Until then, we're enjoying the mild weather and beautiful views of the water. Come back and visit! 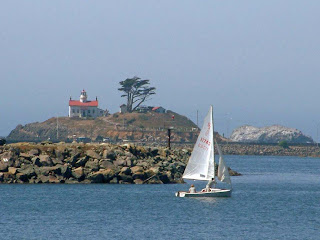 It's been a while since I've had the time to update our travel blog; we've been busy with visiting friends, doing volunteer work, and making our way to the Oregon coast. We arrived back at Lee Metcalf NWR feeling like we'd returned home. It was great to see the refuge staff again, and we were able to park the motorhome on our old pad from last year. This year we were next to another couple, Kirk and Pam, veteran full timers and volunteers whose travels we've followed on their web site, Our Great Adventure. We've emailed back and forth over the past year, and last year suggested that they try Metcalf NWR for a volunteer stint. We had a great time getting acquainted, and swapped many stories (some actually true) of our adventures. Bob, the outdoor planner, volunteer coordinator, and our good friend, put us both to work the minute we arrived ("Hey, it's great to see you, I've got a few projects for you!") and we enjoyed putting on our volunteer shirts and going to work. We spent ten days working, visiting, and having a wonderful time. The only downside was the heat and smoke from wildfires burning east of the Bitterroot Valley and in the mountains west of us in Idaho. The smoke from the fire 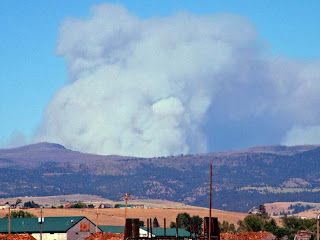 to the east was often 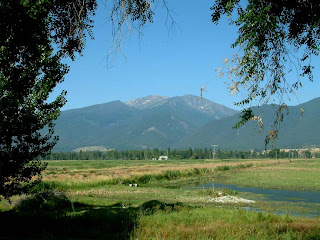 spectacular, and as of today is still only 5% contained. Still, we had a few days of blue skies and clear air, and the view of the refuge with the mountains in the background was beautiful. Thanks to everyone in the Lee Metcalf NWR for making our visit special! We left there with a promise to return next spring, crossed over Bitterroots at Lolo Pass , then drove along the Lochsa River down the mountains into Idaho to spend four days at Orofino and the Clearwater Crossing RV Park. The park is new and very well maintained, and our site backed up to the bank of the Clearwater River where we could watch the ducks and osprey. The area around Orofino was surprising to us; while the river valley was much the same as other mountain areas we've visited, climbing out of the valley we entered a huge area of wheat and barley fields. Sort of like putting Kansas on top of a big, flat mountain. There were farms and rolling fields in all directions, but in the distance the smoke plume from a distant wildfire looked like the cloud from a nuclear explosion. 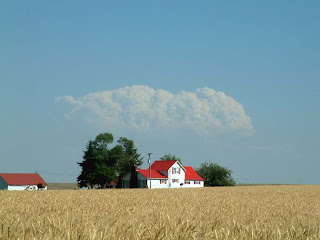 Since we were in the area, we visited the Wolf Education and Research Center, the home of the "Sawtooth Pack", featured in TV documentaries and made famous by the photographers Jim and Jamie Dutcher. We had always looked forward to seeing the wolves, but were disappointed with our visit to the center. Only three wolves from the original pack are still alive; those that we remembered from the shows and pictures are buried in a special area of "wolf meadow", and the remaining wolves were not visible due to the heat and midday sun keeping them hidden in their den. Taking their place to keep us entertained, a doe grazed in the meadow and her twin fawns watched us with curiosity. 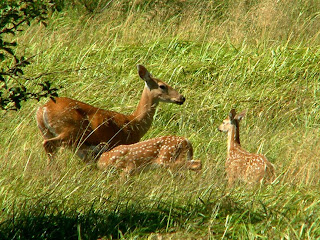 Later in the week, we visited the Dworshak Reservoir, a 54-mile long lake created by the huge dam just outside Orofino. It's a beautiful lake, with excellent campgrounds and boat marinas developed by the Corps of Engineers. We visited the dam and talked with the staff about future volunteer opportunities, then took a scenic drive across the lake and over a large 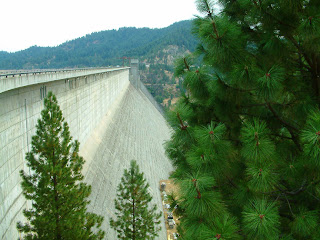 suspension bridge. We enjoyed our stay in Idaho, but failing to break the bank at the local Indi 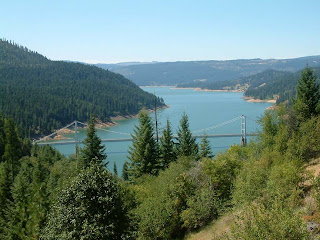 an casino, we packed up and headed west, following the Columbia River Gorge (and terrible headwinds - a 5.5 MPG day) to Woodburn, Oregon, about 40 miles south of Portland. We stayed here last year at the Portland-Woodburn RV Park on the way to Montana. It has everything we needed; on one side is an outlet mall, on the other, a very good Workhorse service center. We were able to get our motorhome's oil changed and stock up on clothes (no sales tax in Oregon!), and drove to McMinnville to see the "Spruce Goose", now housed at the Evergreen Aviation 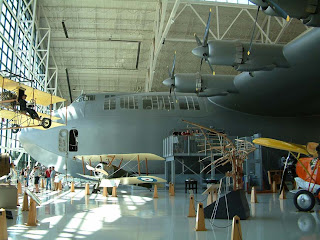 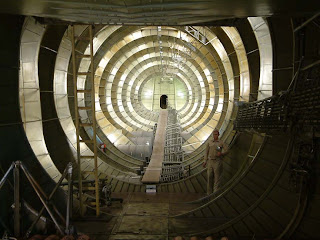 Museum. Having lived near the Air Force Museum Wright-Patterson AFB has spoiled us; while the Spruce Goose was interesting, the museum held little else noteworthy, and at $13 each we both felt it was overpriced. Still, it's an amazing aircraft and hard to believe that it was built and flown (sorta) almost 60 years ago. Maybe it was the trip to and from the museum that affected our visit; traffic here is horrible, reminiscent of Southern California. "The Five" as Interstate 5 is called by Californians, runs through here also and is always filled with bumper-to-bumper traffic. Not as many anorexic blond women in BMWs talking on cell phones as in Southern Cal, though. The weather here has been fantastic; highs in the 70s with very cool nights, but it's time to move on. We're off tomorrow on our trip to the coast, next stop Newport, then a stop at Bandon, then on to Harris Beach State Park. Stay tuned!
Posted by DNPC at 9:13 PM No comments: