Too Busy to Blog

There have been times in the past when I haven’t updated our blog because, well, we hadn’t done anything “blogworthy”.  This time the reverse is true; we’ve been so busy in our summer job as Interpretive Hosts at Farragut State Park in Northern Idaho that I haven’t had the time to take pictures and chronicle our time here. 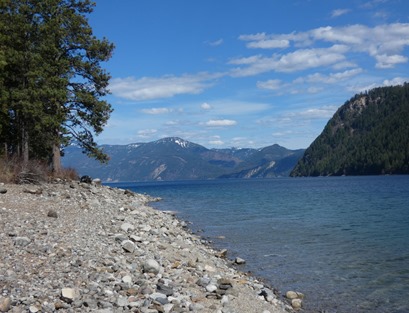 We arrived here in late April, when there was still snow on the surrounding peaks, and quickly became engaged in a multitude of projects.   Our job requires us to develop and host evening programs at the park’s amphitheater, teach a Junior Ranger class on Saturday morning, and entertain children during school tours.

This is a state park on a scale we’ve never seen before.  Over 4000 acres, with four campgrounds of two loops each, dispersed campin 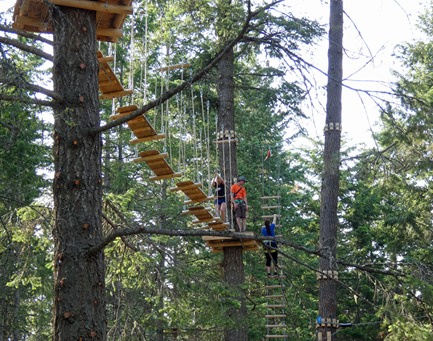 g, group camping areas, day-use areas, a beach, a boat launch, museum, Junior Ranger Center,  4 18-hole disc golf courses, a RC aircraft area, a shooting range, and over 45 miles of trails.  And new this year is “Tree to Tree Adventure”, billed as an obstacle course in the trees.  But while today’s park is impressive, its history is truly amazing.

In the aftermath of the Japanese attack on Pearl Harbor, the Navy needed a new station to train sailors and wanted to avoid the West Coast because of a possible attack.  They settled on this area due to the availability of land, inland location, and size and depth (1150’ with deeper areas)  of Lake Pend Oreille  (pronounced “ponderay”). 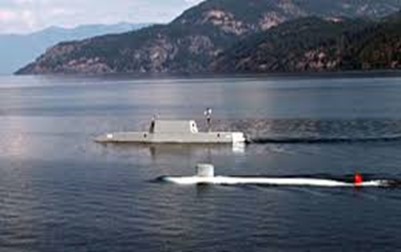 The lake gave them both an area to train sailors in water drills and seamanship and a place to test submarines in a place far removed from the public.  (The Navy base is still in use: here’s an interesting link) 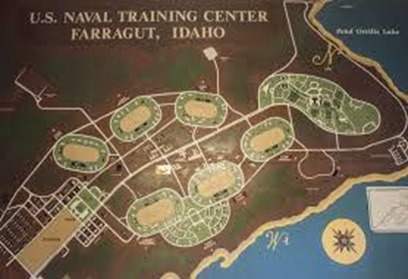 In six months of 1942, 2,200 construction workers turned a quiet area of forest and farms into what would become Idaho’s largest city.  At its peak, Farragut Naval Training Station’s population would approach 70,000.  Six separate self-contained camps each held 5000 trainees, and the station hospital held 1500 beds.  Each camp had a drill hall that 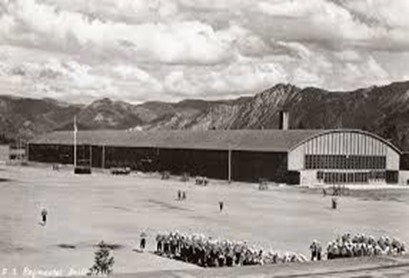 covered 14 acres and held an Olympic-sized pool for water training – the total inside area was as big as 18 football fields!  There were areas for officer training, specialty training, housing for the staff, and even a school for the children.  Trains ran daily to Spokane and busses to Coeur D’Alene to provide a break for those in training.  In just over three years of operation, almost 300,000 sailors passed through here.

After the war was over, some of the station w 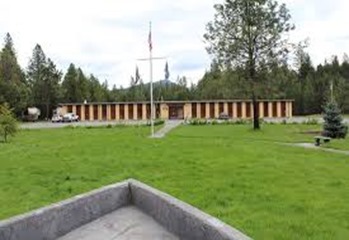 as used for a technical school, college courses, and commercial purposes, but eventually everything – over 770 buildings, was torn down and carted away.  Today, the only complete structure left is the Brig, now used for a museum, Junior Ranger station, and workshop.  And once again the forest has returned.

As with any new volunteer location, we’ve been on a steep learning curve.  The history, plant life, and animals here are interesting and we’ve incorporated much of what we’ve learned into our programs.  This week we taught a Junior Ranger class on how to play disc golf; something we’ve never done until arriving here.  And  we’ve had fun  (mostly)  leading groups of up to 40 grade school children on a hike while Brenda teaches a class on animals complete with furs and skulls.  We entertained over 600 children so far.  Our one regret is that we’ve not had the time to explore the area, but now that the school tours are over we’re looking forward to getting out and learning about the area.  One thing we have had the time to enjoy is the dining and shopping in Coeur D’Alene, only 25 miles down the road. 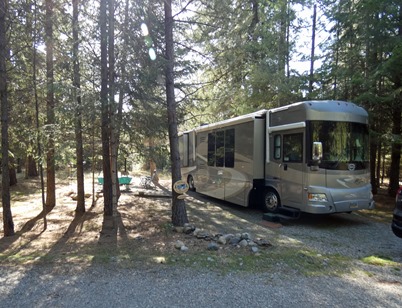 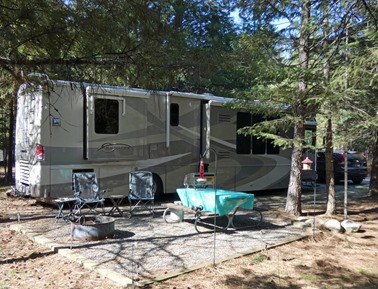 the many times we’ve spent the summer with campers we’re convinced that half are pyromaniacs and the other half are trying to send smoke signals to relatives.

The rangers and other volunteers have been friendly and welcoming.  Our ranger “boss” is an 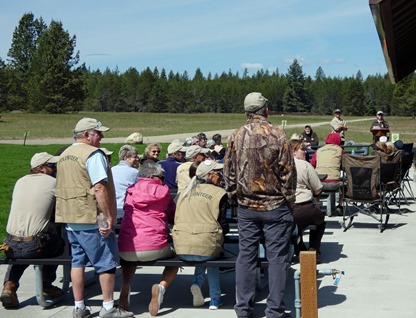 amazing combination of energy, humor, and knowledge.  She’s the type that every volunteer wants to work for – tells us what needs to be done and then leaves us to figure out the best way to do it.  As the season kicked off, the 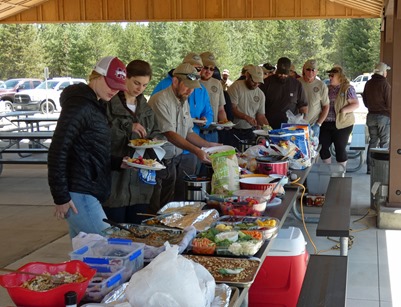 park hosted an orientation meeting and pot luck where every ranger was introduced and spoke of their duties, the state volunteer coordinator welcomed us, and the volunteers (30+) had the chance to visit and get to know each other.  We’re the rookies here; almost every other volunteer has been coming for years – one couple for 15 years! 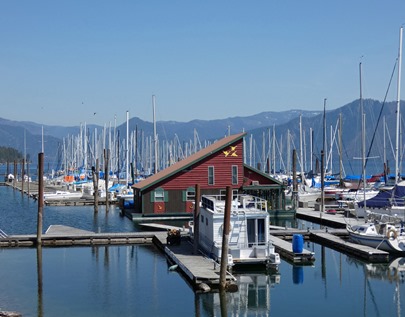 The park’s location is on the southwestern shore of Lake Pend Oreille, surrounded by mountains to the east and hills/forest elsewhere.  Nearby is the small town of Bayview, home of the Naval Acoustic Research Detachment.  There isn’t much room for homes due to the steep mountain slopes, so people have taken to the water – some of the “houseboats” are pretty impressive! 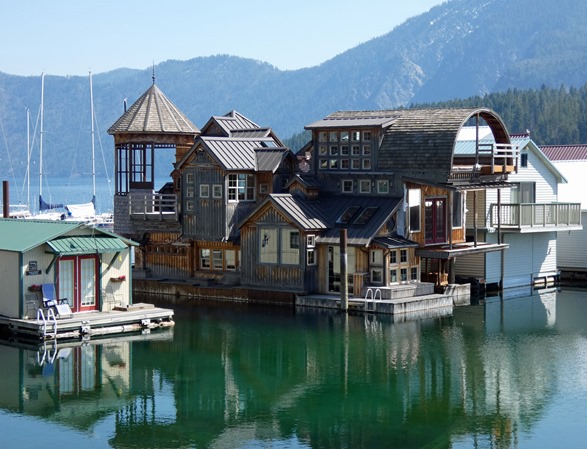 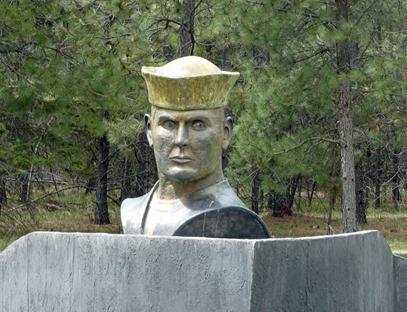 We’ll finish this update with a picture of “Mack”, a sculpture located outside the Brig.  Mack represents the thousands of sailors who passed through here, and when viewed close up you can see that he’s made up of images of individual sailors. 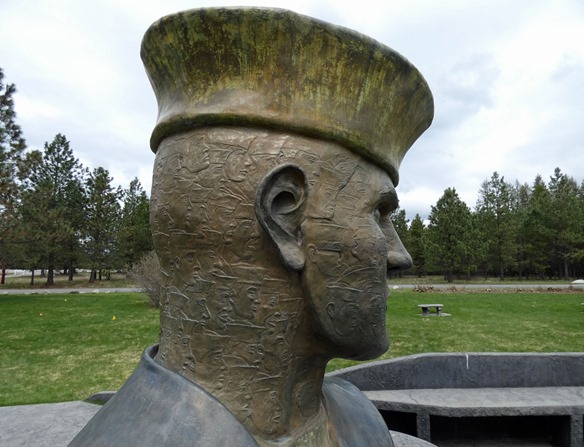 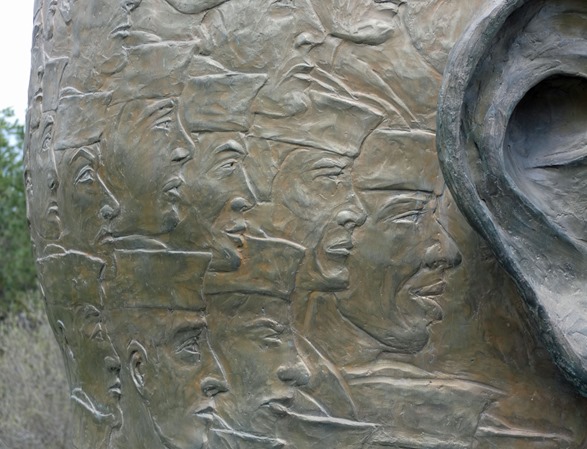 That’s it for now – if you’re passing through the area please let us know, we’d love to show you the area.  Check back, we’ll be updating our adventures soon!