Our last blog was titled “The End of Summer”.  As it turns out, we’re just not done with summer adventures yet.  In early July, a lightning-caused fire began in the Kalmiopsis Wilderness, in the coastal range east of Brookings.  Because it was in a designated wilderness area, no aircraft, vehicles, or power equipment is allowed.  In addition, the fire was located in inaccessible terrain, so it was left to burn itself out.  Except……that now it’s over 100,000 acres and threatening not only homes along the Chetco river, but the town of Brookings.  The fear is that the “Chetco Effect”, also known as the “Brookings Effect” will cause a blow up of the fire and it will jump the current fire lines.  After days of darkness, smoke, and ash fall, our US Fish & Wildlife volunteer coordinator called and told us to leave immediately and head north to Bandon.  Which we were happy to do.  Our view from the deck where we talked to visitors was getting a bit scary: 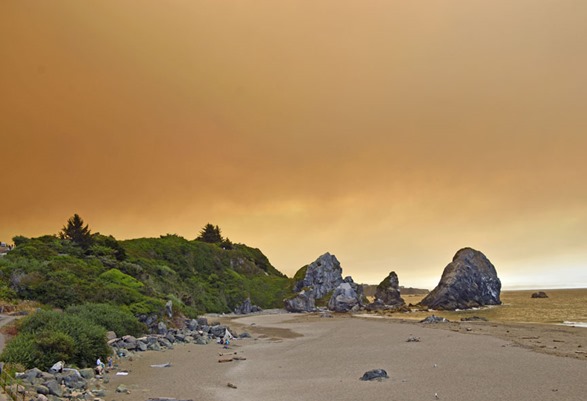 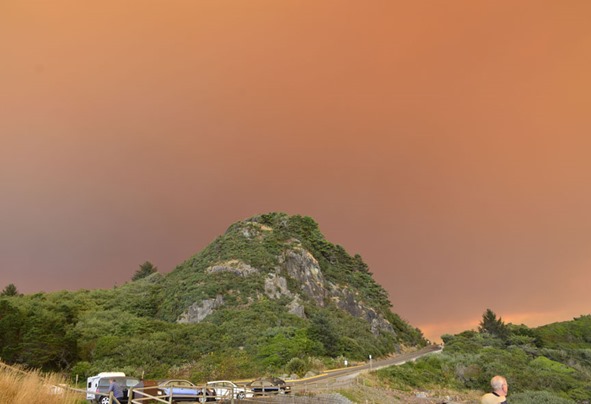 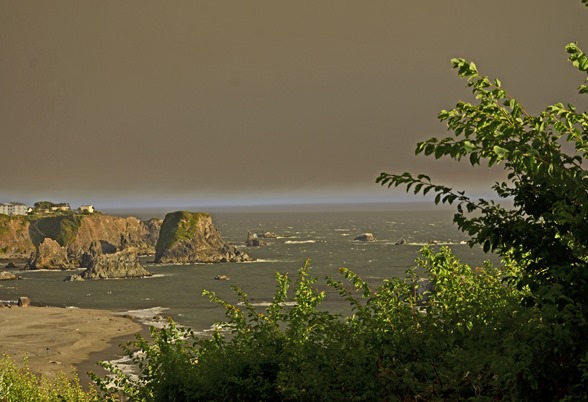 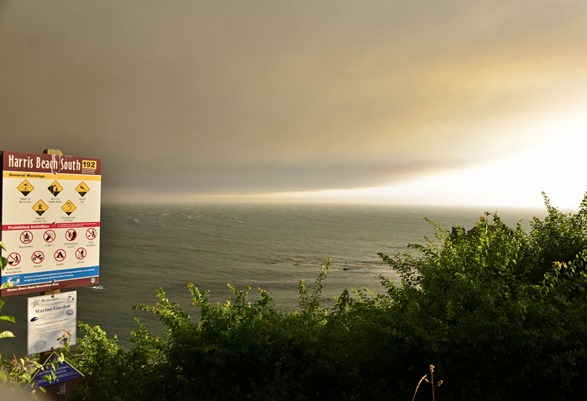 In the park, the view was even worse: 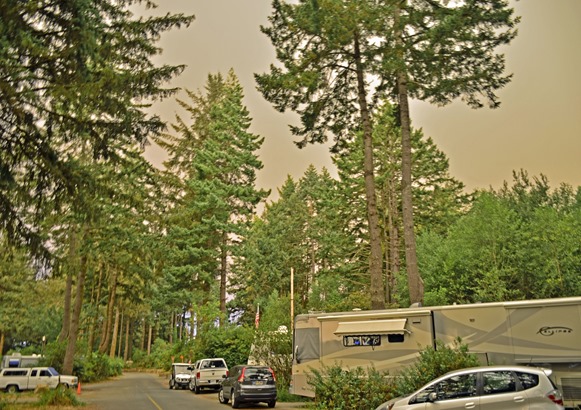 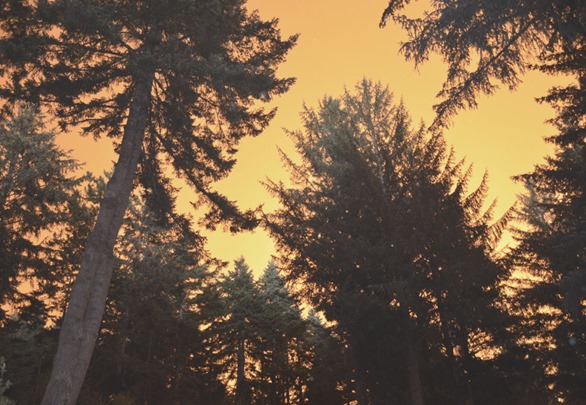 The smoke made staying outside uncomfortable, and then ashes from the fire began to fall. 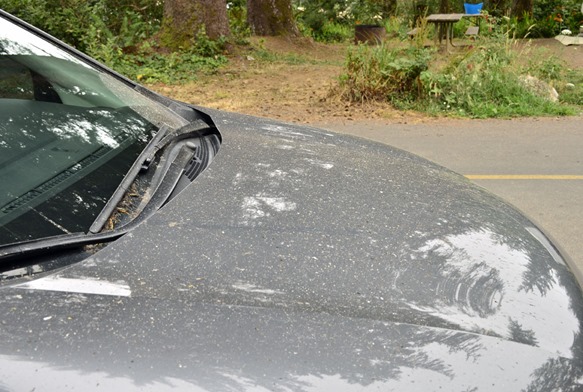 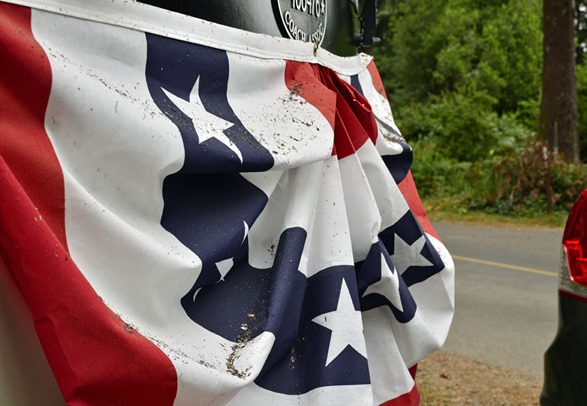 We didn’t need our “Eclipse glasses” to look at the sun, even at midday: 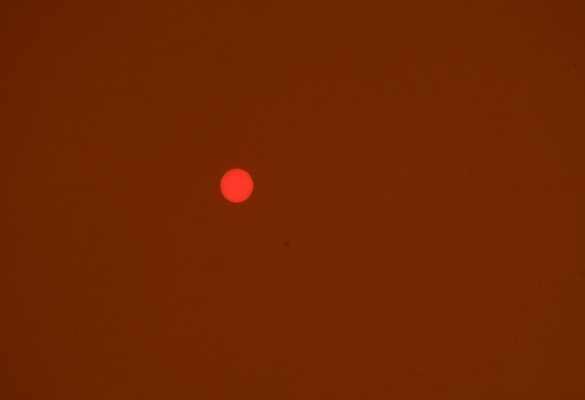 On Monday the 21st, we all gathered to view the eclipse.  The rangers had been planning for months, with evening programs to educate park visitors, signs to remind folks, and even giving out “eclipse glasses”.  We were ready for the big event, with banners, music, and a live streaming video from under the eclipse path.  As it turned out, hardly anyone showed up, the video wouldn’t work, and worst of all, we never saw any change in the fog and smoke filled sky.  It didn’t even get dark!  Or more correctly “darker”.  So we salved our sorrow by going to the local bakery where they make a two-pound pecan-laden sticky bun to die for.  So the day wasn’t a total loss. 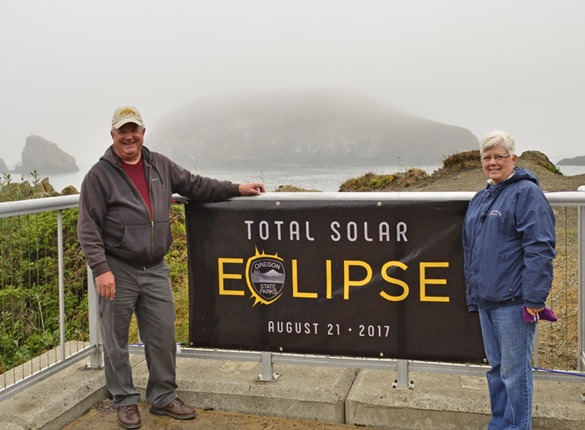 Because of the fire and smoke, the normally crowded and busy beach was nearly deserted.  We hadn’t seen the beach this empty since we started here in early May:

We’ve left Harris Beach State Park with a lot of great memories.  One visitor we’ll always remember was this beautiful lady who was escorted down to our deck by Jon, her driver.  Ruby and some other ladies had made the trip from a senior citizen home in Medford to escape the heat and visit the beach.  Sitting with us, she asked Jon where the rest of the ladies were. 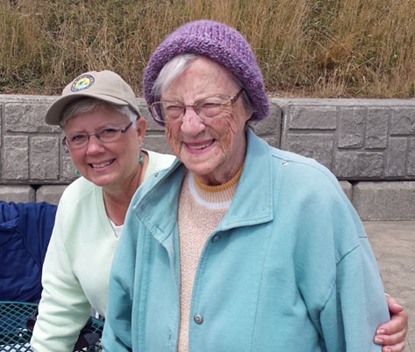 He replied that they didn’t want to get out of the car.  Turning to us, she said “those fuddy-duddys!  All they do is sit around and gossip; you can’t get them to do anything!.  I get out and walk at least one mile a day”.  Which may not be all that remarkable, until you know that Ruby recently celebrated her 98th birthday!  Ruby was a delight to talk to, telling us about her career as a teacher and a “teacher of teachers”.  She’s an inspiration to all of us seniors – after all, who wants to become a fuddy-duddy?

We’re getting ready to take a break and travel for a while visiting old friends and new places.  Check back with us and see what we’re up to!