We’ve spent a fair amount of time in Oregon over the last seven years of traveling, but never had the time or were within a day’s drive of Crater Lake.  This time around, we’re in a location that made the visit manageable, and so on a bright sunny day, with temperatures in the mid-70s, we put the top down, topped off the tank, and headed into the Cascades for a visit to this amazing place.
We decided to make a loop to avoid backtracking, and so we left I-5 and Canyonville on highway 227 for a 100 mile drive to enter the South Gate of the park and visit the Park Headquarters and visitor center.  As you get near the park, the road climbs continuously, since the walls of the crater reach high above the surrounding terrain.  After a brief stop and with park map in hand, we entered the East Rim drive, again climbing to the edge of the lake.  The rim drive is a road that clings to the side of the lake with steep drop-offs on, of course, the passenger side.  The side with the passenger who doesn’t like to look down a thousand feet or so to what would be certain death if the driver would dare to look around at the scenery and veer off the road.  Fortunately, Brenda was nice enough to remind me, in her gentle, encouraging voice to KEEP MY EYES ON THE ROAD!
Our first pull-off viewpoint was the Phantom Ship overlook, and the view was breathtaking.  The smoke in the air from distant wildfires gave the lake a ghostly appearance making the Phantom Ship island look even more, well, phantomish. 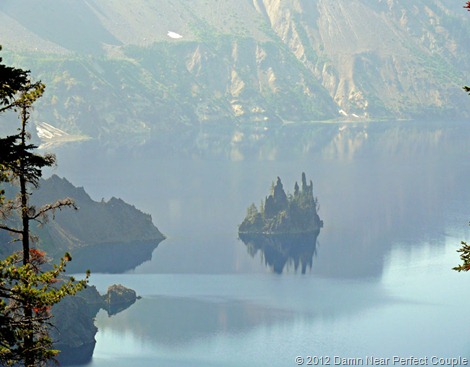 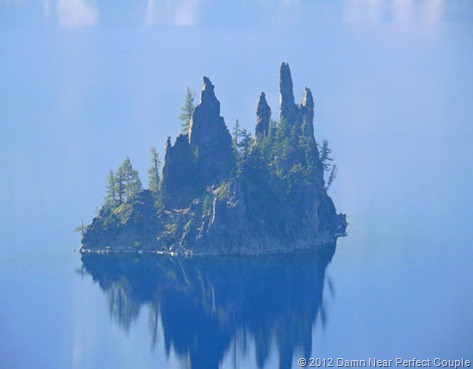 What strikes you immediately is how far the lake is below the rim, and how difficult it would be to get to the water level.  There’s only one access to the water level, at the tour boat docks.  According the the park literature, it’s a 1.1 mile hike, with many switchbacks, down to the water and boat dock, and coming back up, people should allow for an hour or so to make the hike, which is the equivalent of climbing 70+ flights of stairs.  There is no other way to access the water, in fact, helicopters were used to place the boats in the water.  I was curious when I read that there is no fishing license required, and no limits on how many and what type of fish you can catch and keep.  Now I understand – instead of a license just bring 1000’ of rope and a big winch! 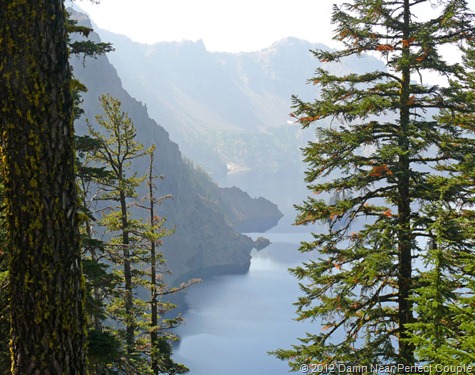 Standing at any of the overlooks, it’s easy to understand why Crater Lake is the deepest lake in the US at over 1900’, and the seventh deepest in the world.  The angle of the crater walls is so steep that you can easily visualize how far down the crater floor must be.  It was interesting to us that the lake is closed to any flow of water in our out; it maintains a constant level through annual rain and snowfall in the winter and evaporation in summer. 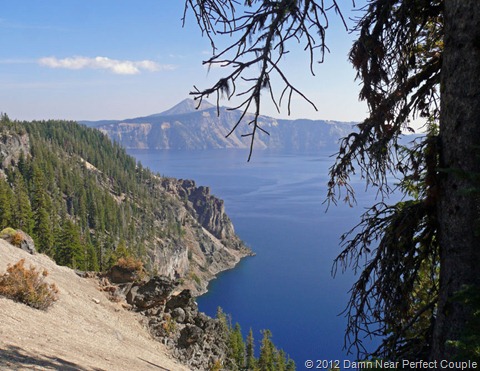 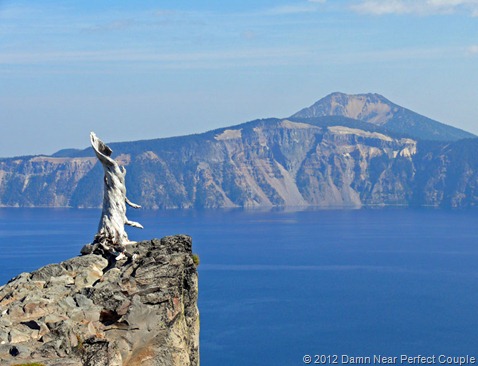 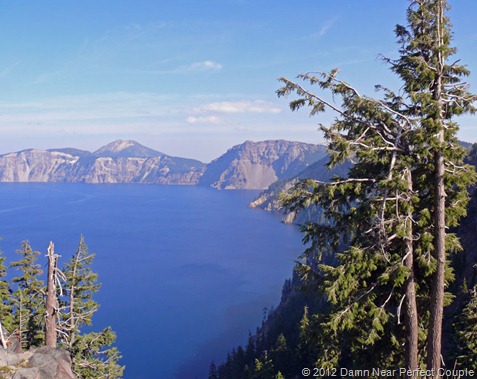 Stopping at other viewpoints along the drive, the rock walls showed the different colored layers formed by the lava, and in many areas, interesting formations like the “Castle” in the picture below. 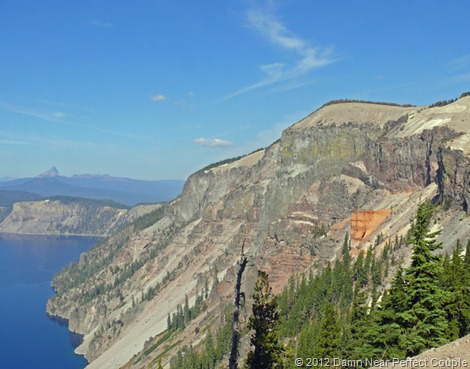 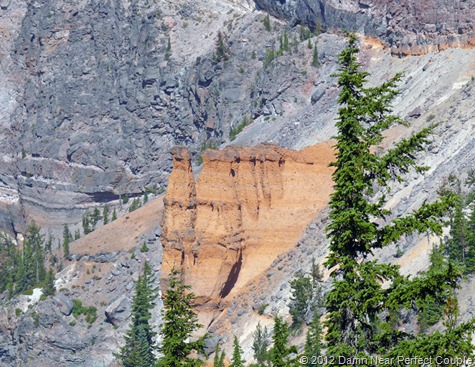 At another viewpoint, we stopped for a look a Wizard Island, the top of a volcanic cone that formed after the original volcano collapsed.  It actually rises over 2700’ from the floor of the lake, but only about 750’ above the lake’s surface.  From our viewpoint, it looked less like a wizard and more like a manta ray swimming away from us. 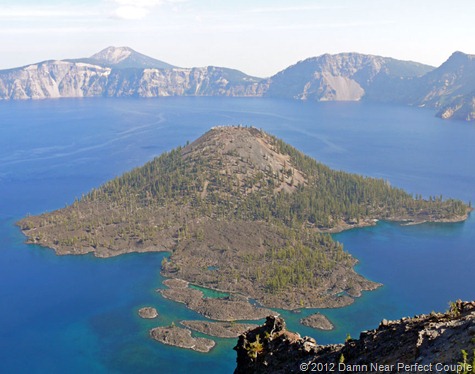 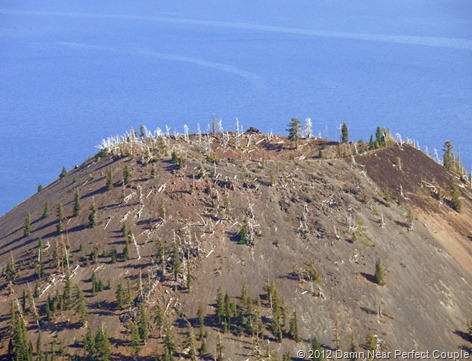 We ended our drive at Rim village, mostly closed down at this time of year.  The park has a short season, opening in mid-Jun or later, and closing in October, although snowfall could make it earlier.
Not only is the park itself remarkable, but the surrounding area also.  Large, rolling mountain meadows, forests, and distant peaks like Mount Thielson make this a truly special place. 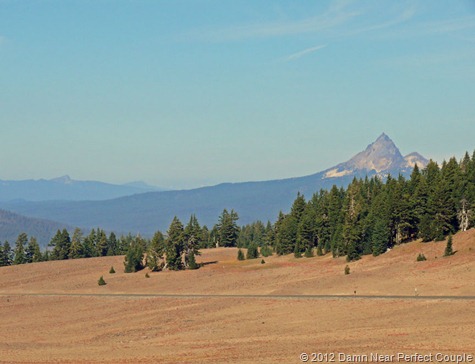 We left the park through the North entrance, on the road that was covered with eight feet or more of snow when we last visited the area in May.  Back then, Mount Thielson was snow covered and Diamond Lake was completely covered in ice; now the mountain was bare and the lake was a deep blue, surrounded by trees with leaves that were beginning to change into fall colors.  It won’t be long until the snow starts to fall, and the average at the lake is 533 inches – yes, that’s over 44 FEET, and when it does, it gets pretty quiet around here.  We’re glad we had the opportunity to finally visit this incredible place, and hope you get the chance if you haven’t already. 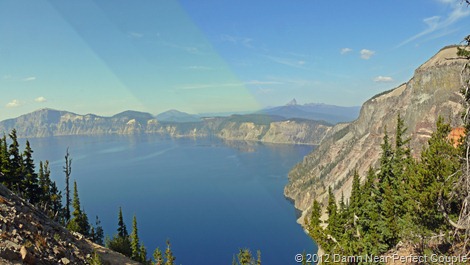 We’ve got more exploring to do, c’mon back soon!
Posted by DNPC at 4:16 PM No comments: 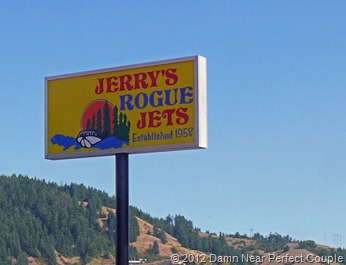 We had a few days off before leaving the coast, and decided that after three summers on the coast, it was time to take a ride on “Jerry’s Jet Boats”, a local adventure that it seems everyone we know has ridden.  The history of the boats is an interesting story of how, without roads, settlers in the mountains along the Rogue River could only receive supplies and mail by mule train or boats.  Over time, the need for the boats as supply vessels eroded, and the tour industry was born. 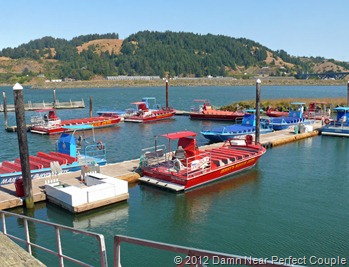 Today, Jerry’s is a big operation, with 15 boats making a number different runs each day.  We opted for the 80-mile “whitewater excursion” trip over the shorter 64-mile and longer 104-mile trips.  Each trip stops in Agness, where a couple of lodges provide meals and a place to relax. 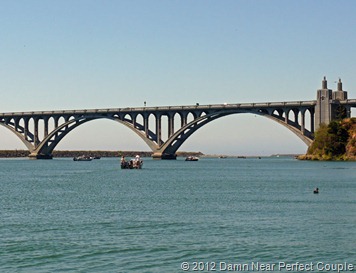 It was a chilly, but sunny and beautiful day on the coast.  Since this was a weekday after the Labor Day holiday, there weren’t a lot of tourists and so we boarded one of the smaller, 32-foot long boats with about 30 other people.  Leaving the harbor, we had to weave around all the fisherman in small boats trying for salmon which are beginning to show up for the fall migration.  As we passed under the highway 101 bridge and headed upriver, our speed increased and the temperature began to get warmer. 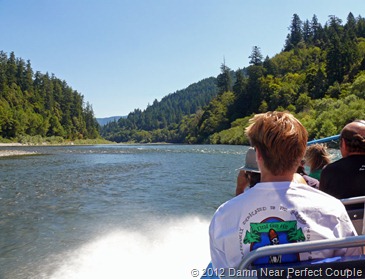 The boats really scoot – with three engines and jet drives they run at around 35 MPH but are capable of speeds over 60, and only need a foot of water or  less to operate.  At the first area of open water, our pilot performed a high speed whifferdill – a maneuver where the boat is put into a sharp turn, then spins on it’s nose, throwing lots of water everywhere.  Fun this time, but a little less after about 20 or so. 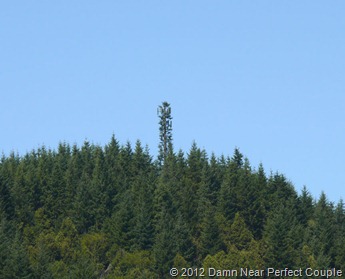 As we sped up the river, we saw lots of Common Mergansers along the shore, and in the distance, spotted a rare Oregon Cell-Pine among the trees.  Surprisingly, we saw many Osprey; when we spent our summers in Montana, they had left for their winter homes in South America by now.  There were a number of Bald Eagle perched in trees along the way, and even a Harbor Seal about 10 miles up river.  We watched this pair of River Otter as they cruised the banks looking for food – it’s amazing how fast they can move through the water! 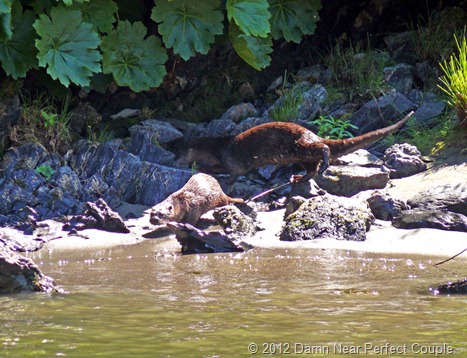 Along the way we came across this “Dinosaur Tree”, a strangely-shaped pine.  The fence in front of it is electrified and placed there by the Forest Service for use by overnight campers to keep their food from the bears. 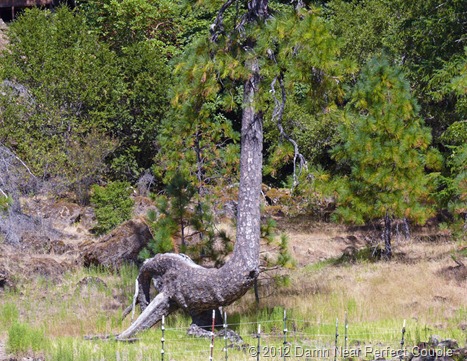 We sped past Agness and continued upriver for the “white water” portion of the trip.  We were a bit disappointed, it really was more riffles than rapids, but our pilot managed to hit the water just at the right angle so that we’d be drenched in the spray.  And then do another “wifferdill” just to make sure no one remained dry.  After a while, we turned back around for our meal stop at the Singing Springs Lodge.  After a long hike up the bluff, we enjoyed a nice buffet on the porch overlooking the water.  We’d heard both good and bad about the food, but were pleased with the quality and service, although the price ($14 each) was a bit high.  After the climb, the food, and the trip upriver, it was tough to stay awake on the trip back down.  Except for all the damn whifferdills keeping us wet.  We saw another pair of otters, and finally, the holy grail of wildlife, a black bear.  It was eating blackberries in one of the many patches along the river, and seeing us, stood up, took one look, and disappeared into the woods before anyone could get a picture.
We pulled into the harbor a little over seven hours after our trip began.  By now, we were back in the marine layer and temperature was hovering in the low 50s with a strong wind, and we were glad to get in the car and start home.  Our impressions of the trip:  Worth the cost ($70 each + meals), but not something we’d do again.  Our pilot, Jon, wasn’t one of the more personable, and seemed more interested in bashing US Fish & Wildlife than telling us about the river.  The scenery is very pretty, but nothing unusual, and after a while the hard seats of the boat became a real irritant.  If we could do it over, we’d opt for the shorter, 64-mile trip, pack a picnic lunch, and bring along a waterproof windbreaker.
That’s it for our time on the coast!  We’ve crossed the coastal range and are parked in Myrtle Creek, along the I-5 corridor.  We’ll be here for a while, so check back and see what we’re doing!
Posted by DNPC at 2:40 PM 3 comments: