Puffins, Plovers, and Pinnipeds – Life on the Beach 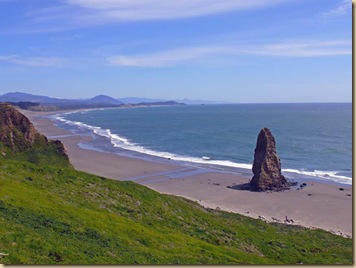 Wow, it’s been a month since the last blog and it seems like just yesterday that we arrived here.  It’s been a busy time as we continued to learn about the area and work as wildlife interpreters for SEA and Oregon Parks.  We recently finished up three days of “Habitrek”, a Parks program for fourth-grade students to teach them about the environment.  We taught the students about Pinnipeds (seals and sea lions) using pictures, skulls, and other props.  Our station was one of several scattered throughout the park – some of others were “beach art” (making art from beach trash), stream life, and a visit from a “mountain man”, complete with musket.  It’s a great program that gets the kids out of the classroom and into the environment for a fun day.  Lots more fun than my childhood field trips to Pymatuning reservoir to feed the giant carp.

On another day, we set up spotting scopes and helped visitors identify the wildlife on one the the area’s best ocean viewpoints, Coquille Point.  From the overlook, you can see thousands of nesting Common Murres (cute little penquin-looking birds), Cormorants, and everyone’s favorite, the Tufted Puffin.  There’s only one breeding pair visible on the rocks, and they’re the birds that people come to see.  During our visit, they came out from their burrow, did a little dance and flew off for lunch, then returned and treated us to more dancing and some affectionate bill-touching.  Then it was back into the burrow for the day.  They’re fun to watch as they take off – sort of like a football with wings.  They can’t glide, so they pump their wings furiously and look like they’re always in a hurry; but then, I guess they are! 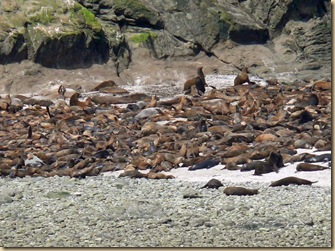 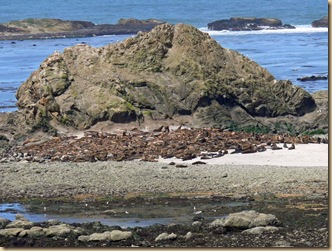 One of our favorite places to watch wildlife is at the Simpson Reef overlook.  Here, the rocks teem with Harbor Seals, California Sea Lions, Steller Sea Lions, and even an occasional Northern Elephant Seal.  You can tell you’re getting near, even in a closed vehicle, by the loud barking of the California Sea Lions.  This time of year there are hundreds of them on the rocks, piled on top of each other, walking over each 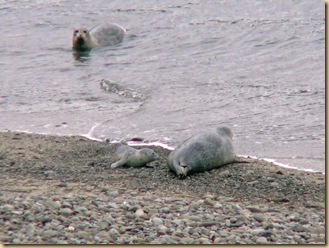 other…..it’s a real party.  The entire reef area is a constantly changing, noisy, and entertaining show – there’s even a resident immature Bald Eagle that hangs around drawing oohs and ahhs from the crowd.   This is the time of year that Harbor Seals are “pupping”, and showing someone a mother and pup through the spotting scope is sure to result in “awwws” and smiles.  The pups can swim almost immediately after being born, and we watched one mother bring her pup to the beach, and after a short rest, back to the rocks during an obvious swimming and fishing lesson.

Another of our volunteer jobs here is monitoring the protected area of the Western Snowy Plover, a threatened species that nests on a beach just south of town.  We 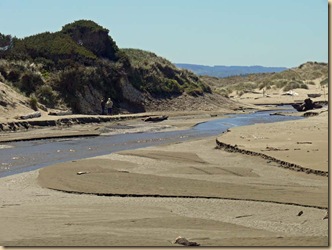 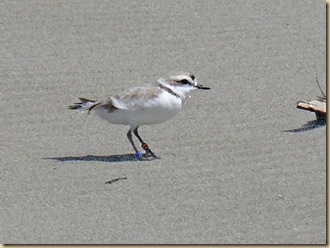 were given an orientation of the area, a pretty area of dunes and beach by one of the park naturalists, and even managed to see a breeding pair as we walked the beach.  The Snowy Plovers numbers have been in decline alone the coast due to loss of habitat and human activity, and here the breeding area is protected by rope barriers, signs, and volunteers.  Our job is to monitor beach activity, help people understand why the area is protected, and report any activity that may harm the nesting areas.  Another tough job – sitting on the beach, listening to the crashing waves, eyes getting sleepy…….. 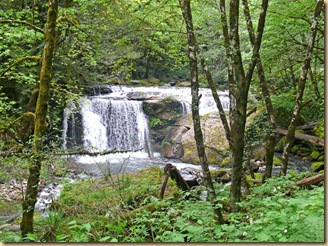 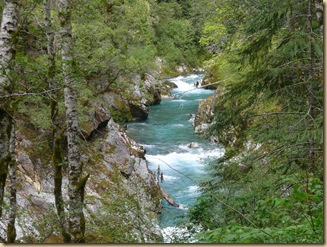 It’s  amazing the contrast between the coast and just a few miles inland.  We spent some time driving inland and were amazed how quickly the landscape changes.  In just a few miles, we were driving through a  deep green tunnel, as the huge firs and Alders blocked the sun, and the ground was covered in ferns and brambles.  We followed a bright blue river crashing down the mountains, and came across this pretty waterfall deep in the woods.  Deep in the mountains, we were amazed at all of the old dairy farms, most of them abandoned, and the number of bright green meadows.  This part of Oregon is truly 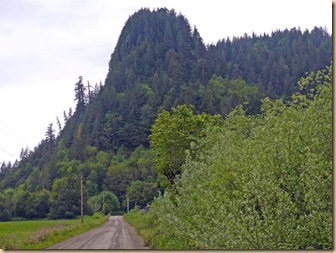 amazing, and we’re looking forward to exploring more of the backroads.

We’ll be getting out and seeing the area a bit more as our schedule firms up, so c’mon back and visit!