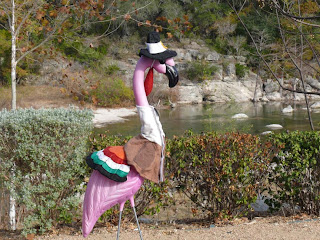 This will be a short post; we've been busy with housekeeping tasks and haven't done much exploring. As you can see, Fanny is dressed in her Thanksgiving finery, and will soon be donning her Christmas outfit. Brenda and I hope you all had a happy and fulfilling Thanksgiving holiday, and remember, it only takes a 20 mile brisk walk to burn the calories of a typical Thanksgiving dinner!
We spent the day with old friends Tom and Janet, and Tom's brother Vance. It was a great day with memorable food, followed by one of Brenda's famous cheesecakes (pumpkin pecan), and a chocolate torte. Unfortunately, I'm about 19 1/2 miles short of burning up all of the calories.
We've decided to spend another month here at Huaco Springs instead of moving to Blanco State Park, since this is closer to friends and the activities in San Antonio. We'll be here until the December 28th, then find a place for a few days before moving to Blanco. One place we're considering is McKinney Falls State Park near Austin. We visited there last week and were impressed by the beauty of the area and the facilities in the park. While there, we met two other Escapees couples who were finishing up their two-month workamper stint. We enjoyed comparing notes on places we've been and people we've worked with. As we always find out, it's a small world among the full time community.
We'll be out and about next week, check back and see where we've been!
Posted by DNPC at 3:31 PM No comments:

It Was the Wurst of Times 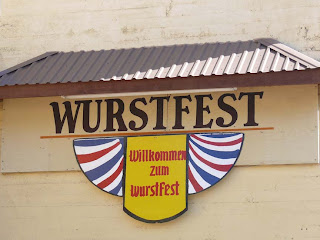 The signs of autumn have arrived here in Texas; the leaves are turning, the mornings are cool, and it's time for the eagerly-awaited New Braunfels Wurstfest! This 10-day salute to sausage galvanizes the entire town as over 100,000 people flock to the Wurstfest grounds to eat German food, listen to polkas, and heft a pitcher or two of German beer. It's a well-oiled machine that has been going on for over 45 years, and offers a theater production ("Raiders of the Lost Wurst"), carnival rides, and an arts & crafts show. We decided to wait until the last day, a Sunday, to visit, hoping that we'd avoid the big crowds (we did). Paying our $8 entrance fees to the liederhosen-clad gate attendant, we entered the grounds and headed for the Wursthall, the largest of the three live-entertainment areas, where the eleven-member Jimmy Sturr orchestra was 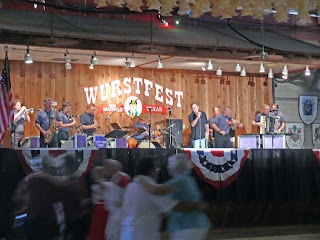 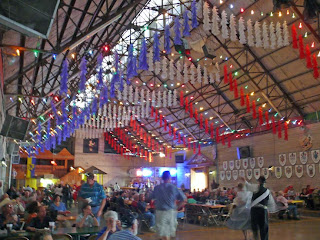 with picnic tables, and conveniently located next to the beer and food vendors. We settled in to listen to the polkas, but it wasn't long befor 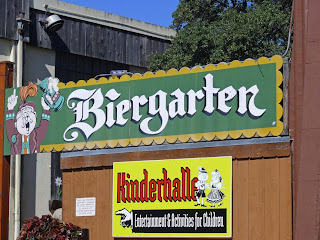 e I headed for the food area (funnel cake for Brenda, bier bratwurst with sauerkraut for me). We decided to skip the beer ($17 a pitcher domestic, $25 for German) since it was early in the day, but looking around we could see we were in the minority. With entry fee, food, and a few beers a visit to the Wurstfest could become a pricey evening; but hey, you can drop the kids off at the "Kinderhall" where they'll be supervised, tank up on Spaten Munich beer, eat a bier brat or two, dance the polka, and take a shuttle back to your hotel ($10). If the big hall is too crowded, no problem, there are two more entertainment areas, "Das Grosse Zelt" (the big tent) where we listened to Lorelei and Schatzi yodel, 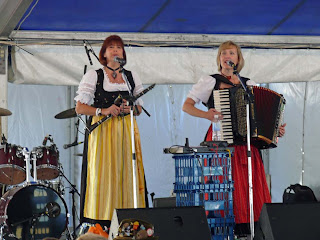 or "Das Kleine Zelt", where Oma and the Oopahs were wowing the audience. 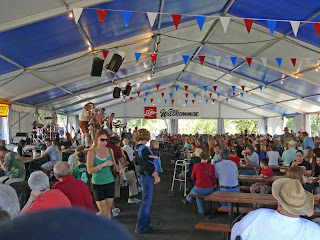 Taking a moment to look at the crowd, it was interesting to note what we didn't see - men with earrings, teenagers with purple spiked hair (or teenagers, period), mullet haircuts, or noticeable tattoos. There were lots of families, but the bulk of the crowd was those of us who are more senior in age and therefore better able to appreciate a good beer, brat, or polka. It was an interesting and enjoyable visit; next year we'll plan on making an evening of it - too bad we can't park the motorhome within walking distance.
Trying to find a place that would remind us of being back east in the fall, we visited the Lost Maples State Natural Area, a park near Bandera where an area of uncommon Uvalde Bigtooth Maple trees are found. Driving through Bandera, which bills itself the "Cowboy Capital of the World", we both agreed that they could use more "cowgirls" to help dress up what was an unattractive, run-down looking town. Arriving at the park, we found that in keeping with our "wurst of times" theme, we were about a week late to see the maple trees in their fall foliage, but had at least avoided the crowd of over 5000 that had visited the previous Saturday. Still, it was a nice walk through the canyon; it was a beautiful day and there were still a few colorful trees. 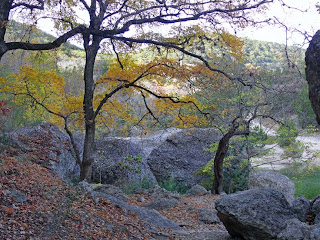 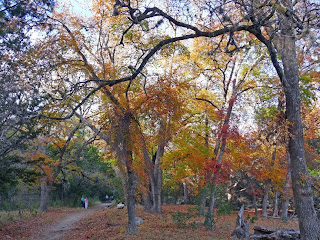 The hill country of Texas is beautiful place; we enjoyed the drive, although we both wished we still had a Miata to drive on the twisting roads. Ah well, we can only tow one vehicle behind the motorhome at a time, so we'll have to stick with the SUV. We'll be out exploring again soon, stop back and see where!
Posted by DNPC at 10:32 AM No comments: 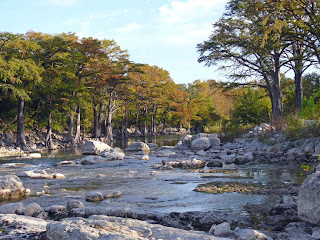 We've moved into our home for November, a park on the Guadalupe River named Huaco Springs. It's one of a number of parks and canoe/tube rental facilities along the river, and during this time of year, is fairly quiet. The river is low this time of year, and because of a year-long drought and near-record low water at the Canyon Lake reservoir, may remain low for some time to come. What's nice about this park is that the sites are large and they're set up so that you can either back in or pull in for a view of the river. We chose to pull in, and it's nice to have a river view through our "picture window". 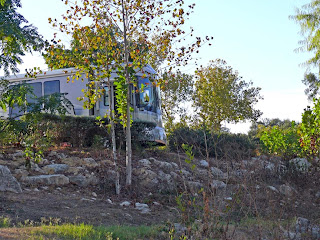 It's still in the 80s each day here, which allows us to sit outside in the evening and listen to the water 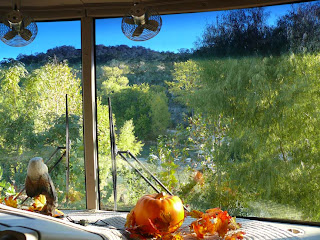 rushing through the rapids. The river is very pretty, with large cyprus trees along the banks and Cormorant and Heron visiting to look for fish. It's nice here now, but we wouldn't want to be here in the summer when the "toobing" is taking place; this is a large campground and their "quiet time" rule doesn't start until midnight. We'll be here for the month, then head a bit north to Blanco State Park.
One of the enjoyable aspects of our lifestyle is exploring small towns. A few days ago we visited Shiner, whose welcome sign that announces it's the "Cleanest little town in Texas" just might be 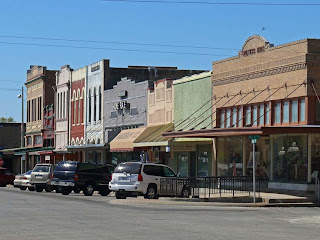 correct. It's the home of Shiner Beer, a legendary beer here in Texas that is now being sold throughout the country. It's not surprising that there's a brewery here; the population is over 50% Czech and German, and in 1914 the locals, who yearned for a beer like in the "old country", hired a brewmaster named Kosmas Spoetzl. They've been producing great "craft" beer ever since. Having been on the Budweiser and Coors brewery tour, this one was a bit different - the entire operation consists of 60 employees, and only one of the seven beers is made at a time. 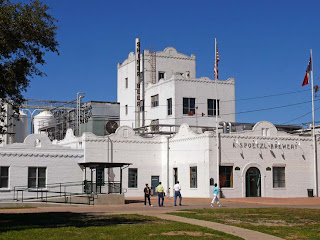 The day of our tour, Shiner Bock, the biggest seller, was being produced. The tour didn't take very long, and afterward we were treated to our choice of three four-ounce tastes (the holiday brew, made with pecans and apricots, was very, very good). The Shiner story is one of those feel-good stories; it's presence has contributed to the local economy, they have a loyal group of employees (one retired after 60 years on the job), and they seem to enjoy what they do. They even close on weekends so that employees can be with their families. The little town is also special with manicured lawns, neat houses, and picturesque 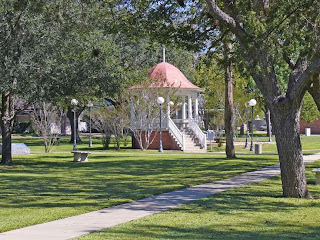 parks (complete with bandstand). This is an area of many small Czech and German communities, and each town has a large church or two. In shiner, the Saint Cyril and Methodious church dominates the skyline. 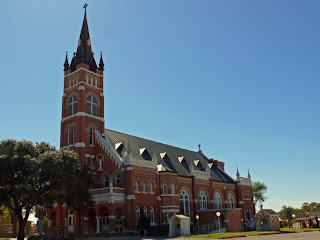 It's one of the 15 "painted churches" listed on the National Registry of Historic Places, all of Czech or German heritage. Having grown up in Northeast Ohio, I somehow thought that all the Czechs settled in that area - I'm still amazed at how many are in Texas, and how many bakeries advertise "kolache". In fact, we bought a dozen on our trip to Shiner, and the poppyseed were incredible. 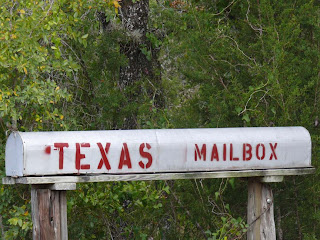 Occasionally we'll come across something really clever; on the road to our RV site we came across this mailbox. Come back and see us as we continue our search for the perfect kolache!
Posted by DNPC at 12:48 PM No comments: