In my pre working-at-a-wildlife-refuge days, I thought that "bird banding" was some type of avian instrumental group - imagine my surprise to find out they actually put lttle metal bands on birds! Last week Brenda and I had the opportunity to visit and watch while refuge staff and volunteers conducted bird banding. 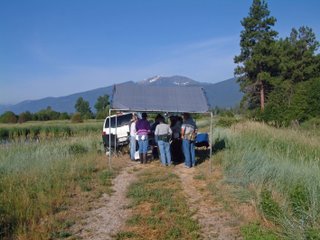 The banding takes place on the Lee Metcalf refuge and has been ongoing at the same site for over 10 years. I have to admit I grumbled about having to get up at the crack of dawn (7:00 AM), but she pointed out that the volunteers conducting the banding started at 5:00 AM, so I grudgingly agreed.

The birds are captured using a series of very fine, large rectangular nets, called "mist" nets, placed in the same position each week during the season so that the data collected has a baseline. 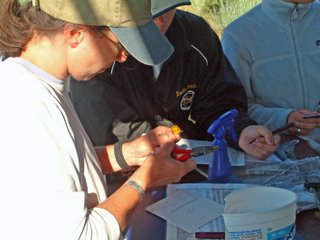 Birds that have flown into the net (about 60 during a six-hour period) are placed in a soft cloth bag & taken to the banding station. We were both impressed on the thoroughness of the data that is compiled on each bird; weight, body dimensions, approximate age, and overall health are recorded, and a feather or two is taken for analysis. One of the more intricate tasks is to take a swab sample from the birds errr.........afterburner. The samples are sent to UCLA where they study the transmittal of avian viruses (harmless & which all birds have) in the hope of learning more about how "bird flu" may be transmitted if it mutates to become a danger to humans. 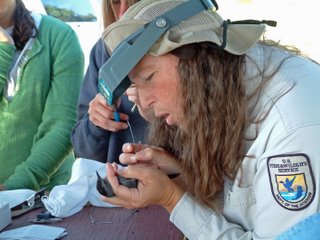 The birds were handled very carefully, and we learned that if they showed signs of stress (don't ask me how they can tell), they were immediately released, or if they had a large brood patch (a fatty area on the stomach that covers the eggs) they were quickly banded and let go to return to their nest. Seeing the birds up close was eye-opening; some of them, like the Bullocks's Oriole, Cedar Waxwing, and the little Yellow Warbler were incredibly beautiful up close. 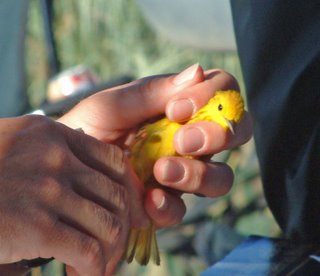 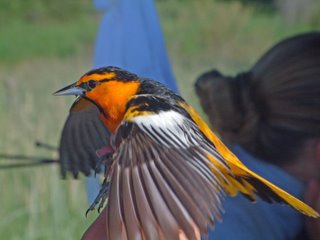 The highlight of Brenda's day was holding and releasing the Cedar Waxwing, although it didn't seem to appreciate her efforts as it kept biting her finger. 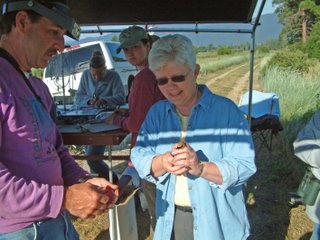 Her form in the release was perfect, sorta like when she pitches horseshoes. For me, as someone who's only previous bird interest 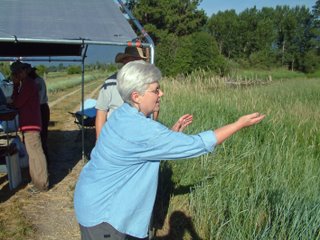 was how many and what size impacted an aircraft, this was an enlightening and enjoyable experience. By the way, I asked the biologist what the largest animal captured in the net was; you guessed it - a moose. Unfortunately, the temporarily captured moose took the net, the poles, and a 1/4 acre of dirt with him as he ambled off. Of course, Brenda wasn't there to see it, she's still "mooseless in Montana". Well, we're off for a sightseeing drive in search of the big bovine, so until next time, thanks for checking on us!
Posted by DNPC at 6:50 PM No comments: