Another Visit to Montana

Leaving Buffalo, we headed up I-25 to join I-90 and head west to spend a few days in Livingston, a historic Montana town of 7000 on the Yellowstone River. 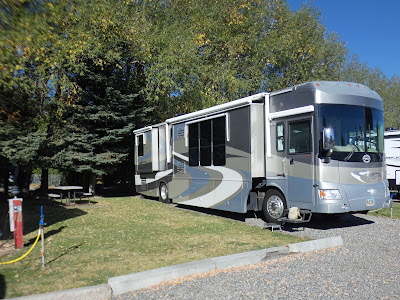 It's another one of those towns that we've driven past many times and always wanted to visit.  We stayed at Osen's RV Park, a nicely maintained park on the outskirts of town.  You can see our review here.  Livingston is a popular tourist destination for both visiting Yellowstone National Park (about 55 miles south) and fly fishing the Yellowstone River.  While it has a historic past, it's now a mix of Western and California cultures with upscale restaurants and high-end gift shops.  It's become another one of those Montana towns where the locals can no longer afford the price of a house due to the influx of refugees from California.
The downtown area maintains the look of an old western town: 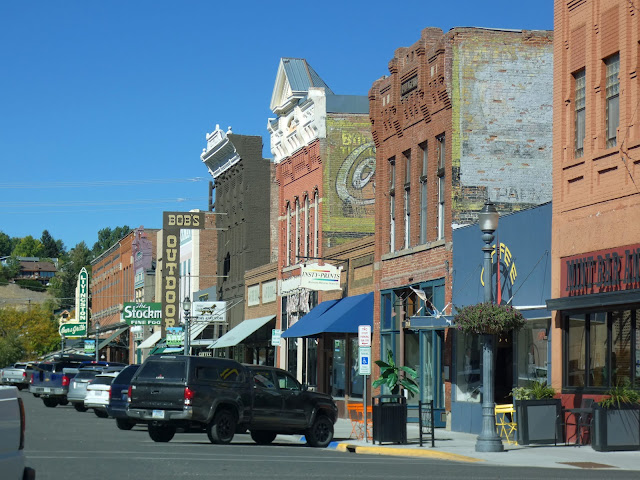 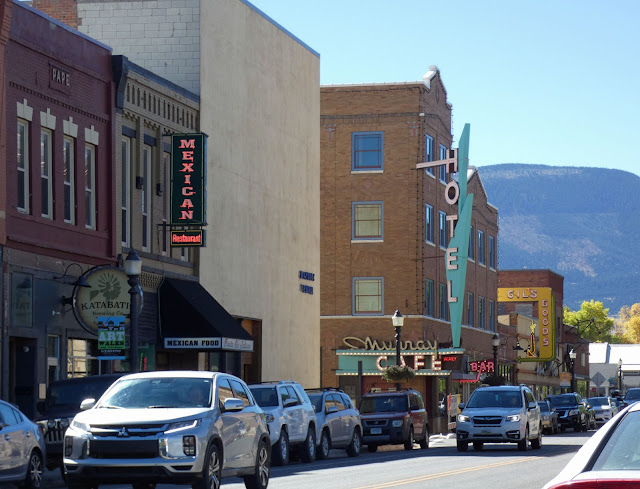 Since we were so close, we decided to take a drive down the valley along highway 89 to Gardiner, the northern entrance to Yellowstone.  Some of the scenery along the way was by itself worth the drive: 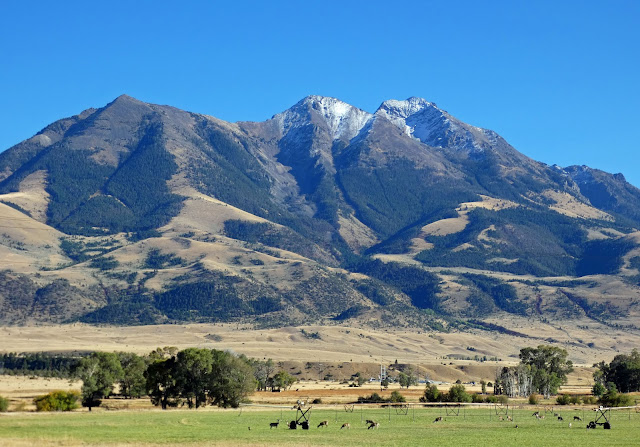 Since the traffic was light, we decided to enter the park and go only as far was Mammoth Hot Springs.  Entering the park, we passed the historic stone gate, now bypassed by the new road. 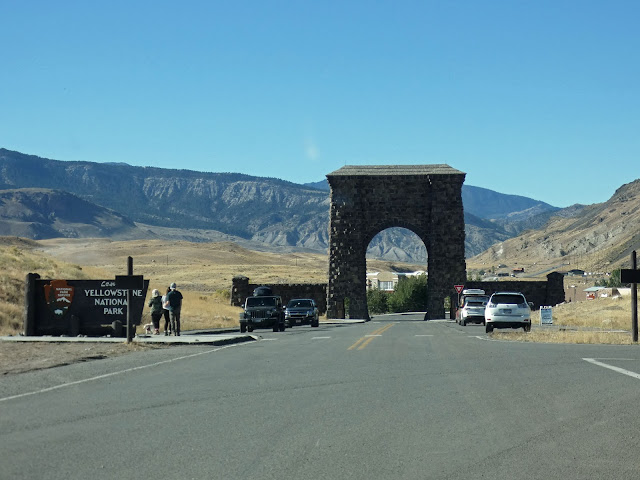 It wasn't long before we realized our mistake....despite it being a weekday in October, the traffic was bumper to bumper, crawling along at a snail's pace.  Every parking lot was full, every building had a line to enter - and God help you if you needed a to visit a restroom.  And all this in spite of the lack of foreign visitors, which are usually half the crowd.  We finally reached Mammoth Hot Springs, only to turn around and get in line again in a slow crawl to escape the chaos. 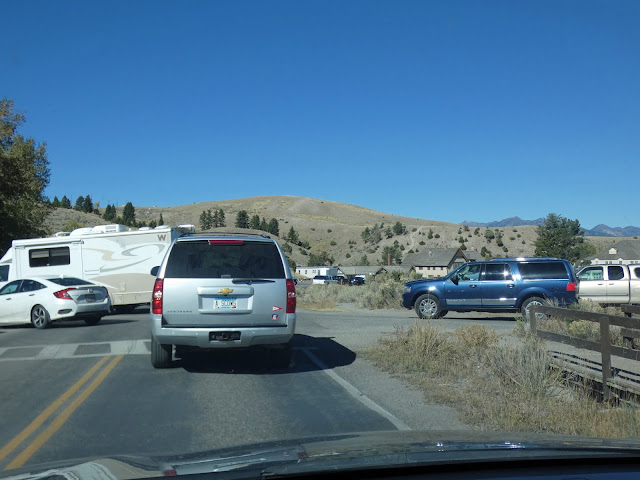 Back in Gardiner, we decided to take the road above the town towards Jardine, once a gold mining area.  We didn't see any wildlife and there wasn't much of the old town to see, but the view from above the town was worth the drive:

Back in Livingston, we left Osen's and headed west again, off the interstate to the small town of Ennis.  We visited here four years ago, and the beauty of the area and history of the old gold rush towns made us want to return. 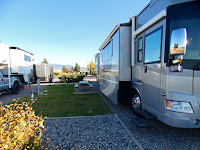 Ennis is a trout fisherman's dream - the Madison River, one of
the nation's premier trout streams runs through here and the town is packed with guide services and fly shops.  We
stayed at the Ennis RV Village, a large, well-managed and maintained park with mountain views in all directions.  The little town of Ennis is another one of those picture-perfect Montana towns: 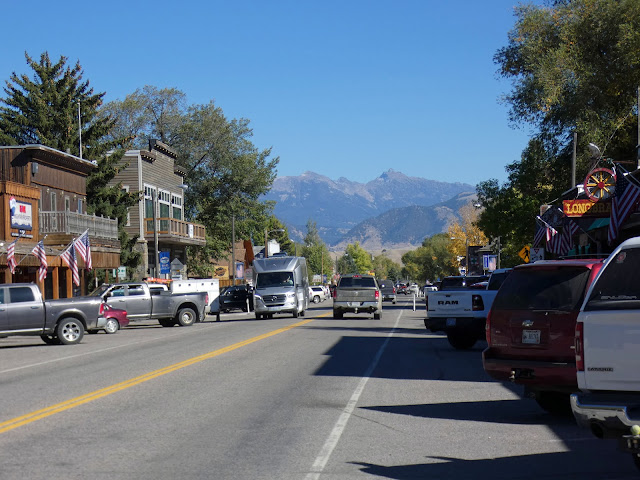 While Ennis is an interesting little town, the real attraction here for us is visiting the historic gold rush towns of Virginia City and Nevada City.  Just a few miles over the ridge from Ennis, Virginia City tries hard to maintain the look of the 1860s.  A history of the town is worth stopping to read: 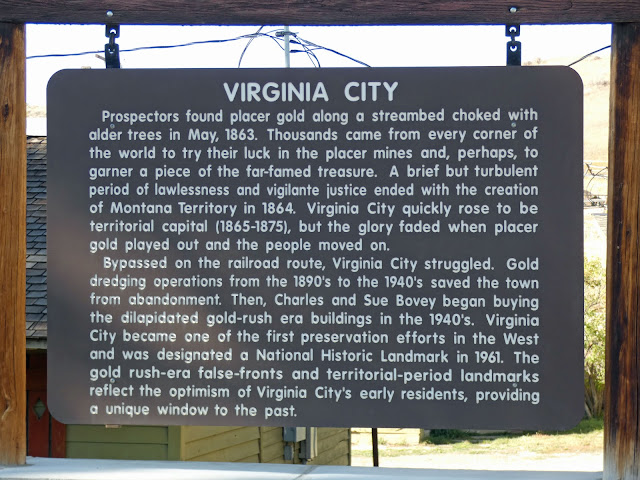 Most of the town had closed down for the season, but one of the unique sights here is that some of the original stores are always open and display the contents as they were left when abandoned. 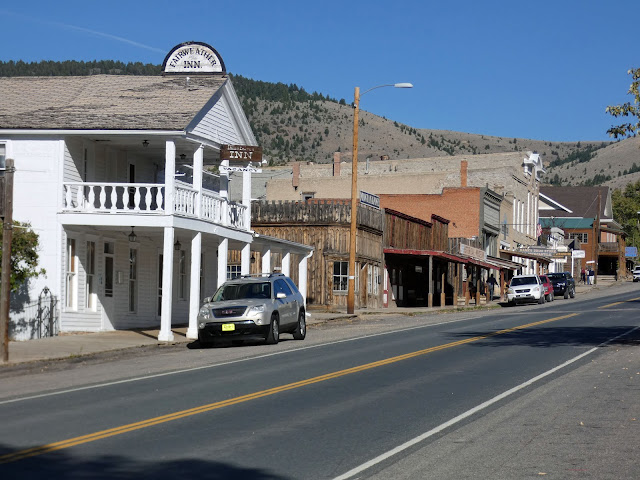 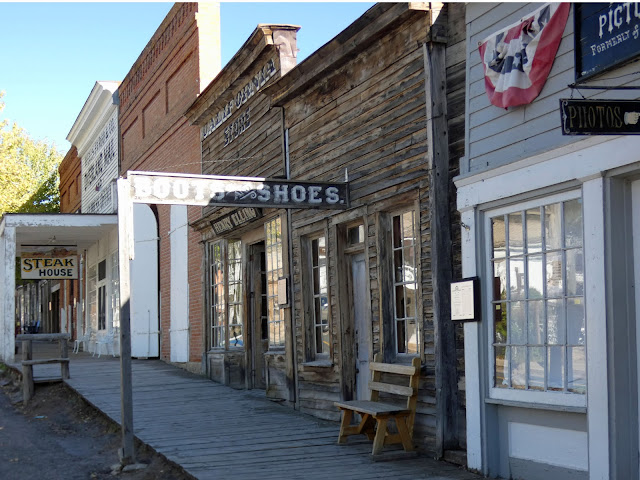 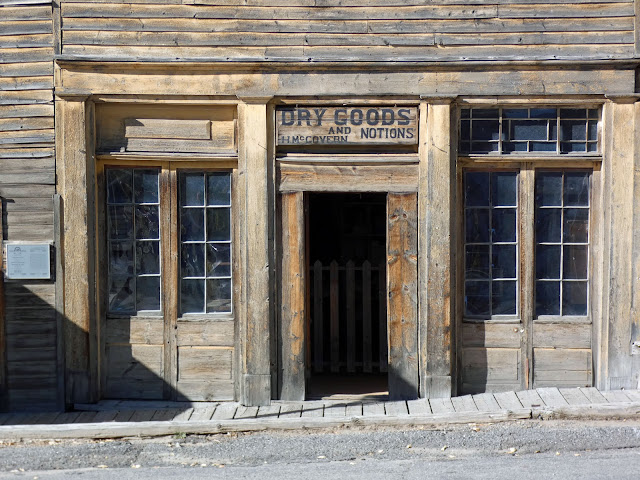 Just up the road is another gold rush town, Nevada City.  Never as large as Virginia City, it's now mostly abandoned but still worth a visit.  Here's the sign describing the town's history: 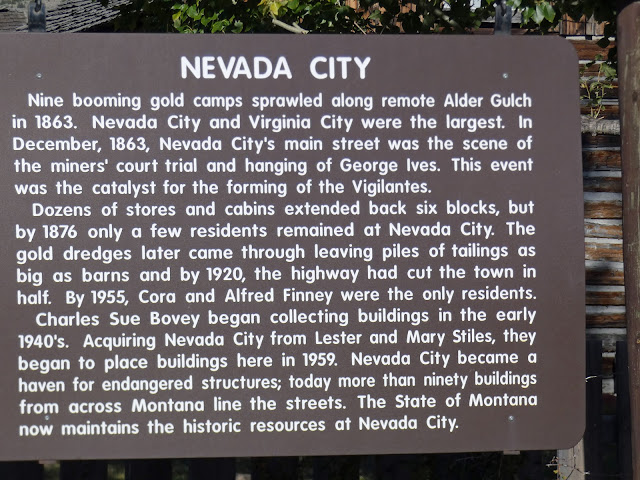 We wondered who George Ives was - here's a video that talks about his hanging, shows some of the historic buildings that were moved here, and even includes a ghost story.  Click here.  Like Virginia City, the town was closed up for the season but that made it look even more historic: 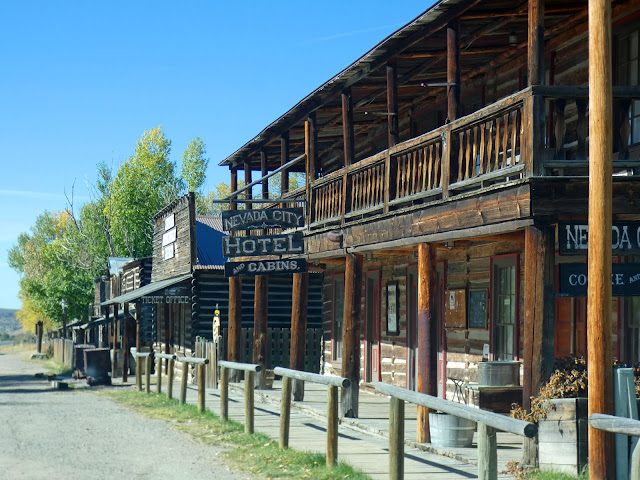 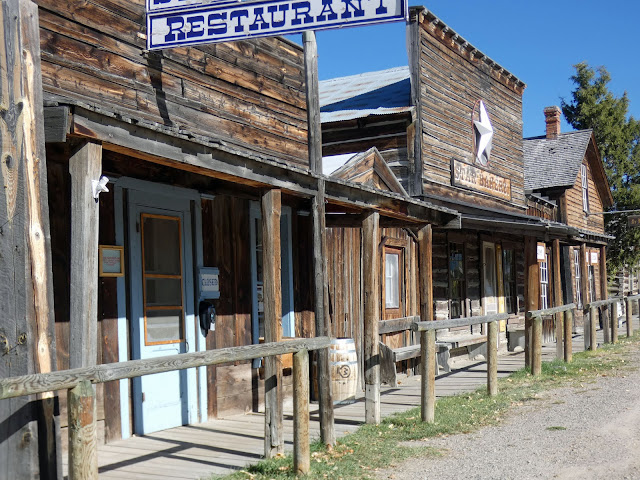 The gold mining boom here was centered in Alder Gulch, which runs about 14 miles from Nevada City west to the town of Alder.  The center of this activity was Adobe City, a small community in the gulch where the population numbered over 10,000! 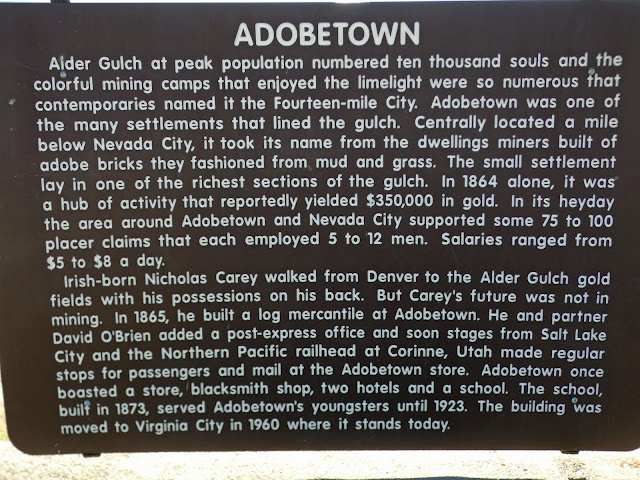 Looking across Alder Gulch today, nothing remains but the rows of rocks formed by the gold dredges.  It's hard to imagine that this narrow gulch once held so many people and so much activity. 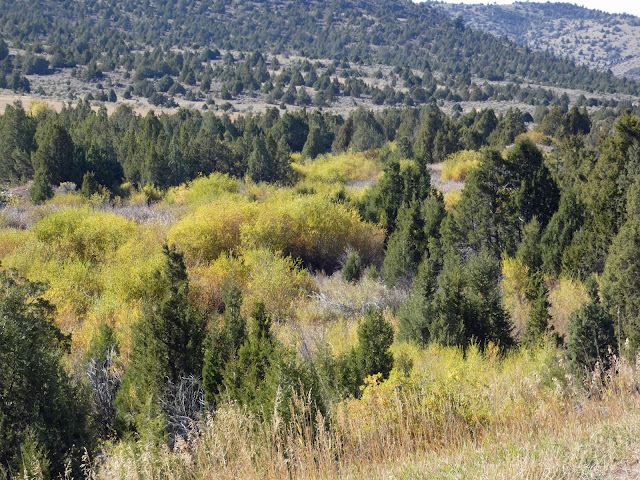 Places like this, with so much history that is no longer visible, is one of the reasons we enjoy exploring the back roads.  And there's often a surprise.  On our return to Ennis, we ended up as part of a cattle drive, complete with real cowboys!  In case it ever happens to you, the technique is to slowly ease your way through the herd as the cowboys guide the herd away from you. 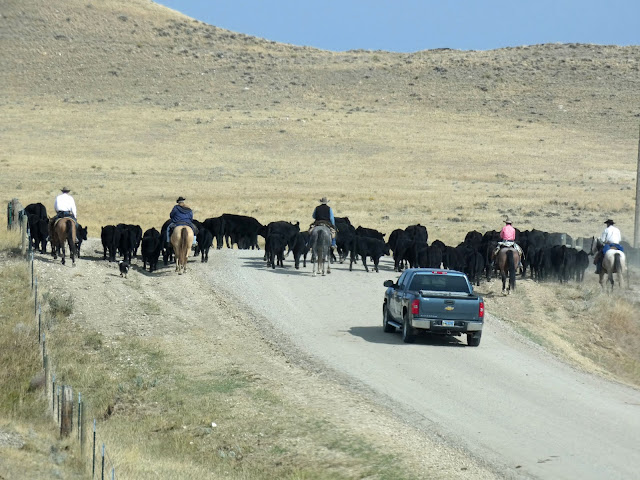 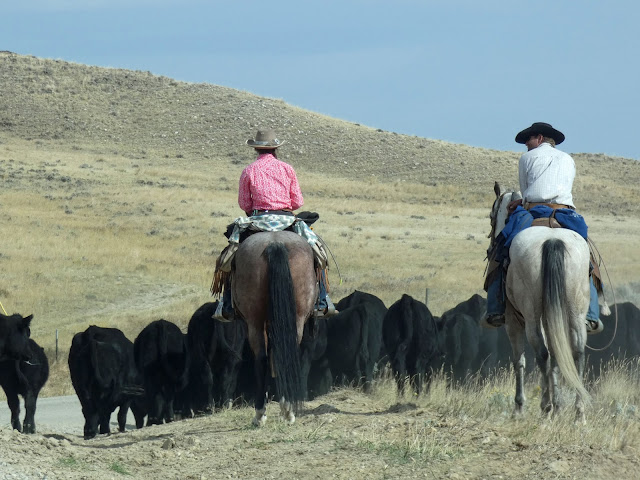 Coming down the hill back into Ennis, we were treated to one last look at this beautiful valley: 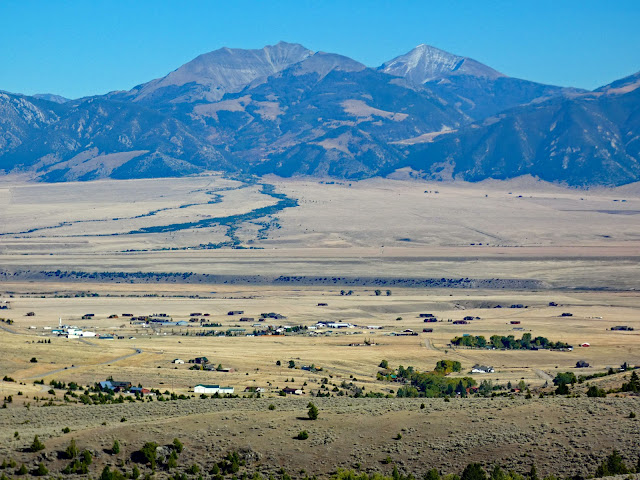 We've always enjoyed our time in Montana, and believe that the state tourism motto is the most accurate in the country:  "Montana - The Last Best Place"
We're back on the Oregon Coast for the winter, but check back with us - we're always looking for new adventures!
Posted by DNPC at 7:09 PM