We're in the Dayton, OH area visiting friends; getting ready to move North to see Brenda's family and more old friends. We haven't been doing anything noteworthy blog-wise, but will soon, so come back and visit!
Posted by DNPC at 7:43 AM

We're in Ohio now, having crossed the middle of the country through spring winds and rains with only some minor mental damage. Our schedule didn't allow for a lot of touring, but we did manage to see some interesting sights. We left I-40 in Tucumcari, NM, and headed northeast on US Route 54, which took us through some great examples of small town America. The flat ranchlands of Dalhart TX, Guymon, OK, and Liberal, KS gradually changed to horizon-to-horizon views of winter wheat fields, and finally into gently rolling hills. Getting off of the Interstate and driving through so many small towns with their interesting storefronts and brick streets made us wish we had more time to spend exploring, but we'd made plans to be in Ohio and had to 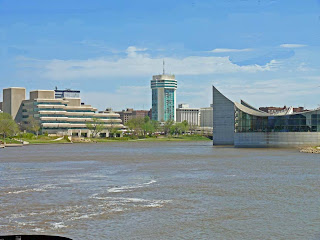 continue on. With high winds making driving a chore, we spent three days in Wichita, KS, a town that amazed us with it's beautiful housing areas, active downtown, and beautiful river drive. We stayed at the All Seasons RV Park, a nice little park with friendly owners and a great location just West of town. Along the river drive we stopped at the Keeper of the Plains Plaza, located on an island at the confluence of the Big and Little Arkansas Rivers. It's a beautiful place; the sculpture of the Indian warrior is truly 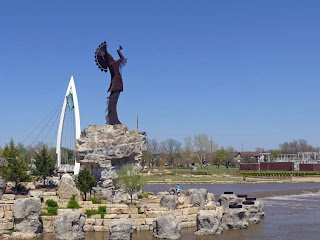 impressive and the island provides a great view of downtown 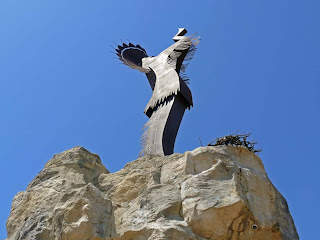 Wichita. Crossing into Missouri, we passed through the neat town of Nevada, and then on to the Lake of the Ozarks area where we spent three days at the Majestic Oaks Campground, a beautiful park set in the trees high above the lake. This is one of the better parks we've stayed in; a quiet, tree-covered setting with huge sites, immaculate facilities, and meticulous landscaping that made our visit truly enjoyable. We extended our stay to three days to explore the area, catch up on chores, and do some shopping. During this time of year, the area is fairly quiet and most of the restaurants and attractions are still closed. Still, the traffic on the only highway through the area makes getting around difficult; we can only imagine how bad it must be turning the height of tourist season. We didn't find the area all that picturesque, and it seemed that every inch of shoreline was taken by marinas, condo communities, or waterfront restaurants, but one area that was interesting was Ha Ha Tonka State Park. Despite the whimsical name, we found it to be an interesting place; the terrain was striking and the history was intriguing. We stopped first at the visitor center, where we saw this Pileated Woodpecker raiding the suet feeder. 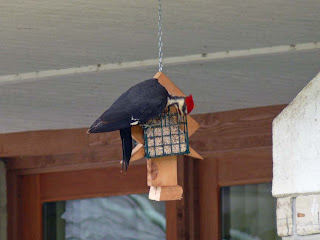 The largest woodpecker (unless there's an Ivory-billed one out there somewhere), it's always a treat to see one with it's "Woody Woodpecker" head and colorful body. We were surprised to find that there was no entrance fee to the park, and after picking up a brochure, headed up the road to the 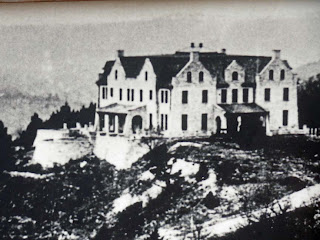 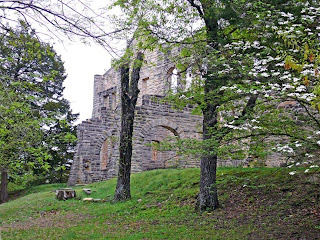 "castle", the ruins of a mansion that burned in 1942. It's an interesting history - built in the early 1900s by a wealthy Kansas City businessman who was one of the city's first automobile owners.....and first traffic fatalities. Both the mansion and carriage house, which were being used as a lodge, were destroyed but the stone walls and foundations still remain standing and are surrounded by a system of paved trails and overlooks. We also explored other areas of the park; one trail led to a beautiful natural bridge in the thick woods, and there were 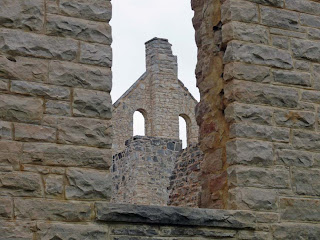 many examples of sinkholes, tunnels, and 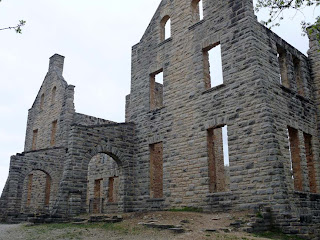 other examples of karst geology. It's a beautiful park, and once they figure out how to level out all of those up-and-down trails it will be perfect! From Lake of the Ozarks, we continued on US 54 until finally joining I-70 West of Saint Louis. From there it was an easy drive to Edwardsville, IL, where we spent time at a nice little park, the Red Barn Rendezvous. We lived here for over three years back in the early 80s, so there was not much new to explore, but we did spend time visiting with old friends. One place that we always visit while in the area is the Soulard Market in Saint Louis, a historic place which bills itself as "the oldest farmer's market West of the Mississippi". OK, it's only 1/4 mile West of the river, but it's still old (built in 1843), and even at this time of year has a large number of vendors with fresh vegetables. With the refrigerator full of fresh veggies, we headed Northeast for a night at Casey, IL, a place we used to visit frequently when we lived in the area, and then on to Wright-Patterson AFB and Dayton, OH to visit with old friends and get some needed dental work done. We'll be here for almost three weeks before heading North to the Cleveland area, and hope to get in some time revisiting some places of interest. Thanks for looking in - stay tuned!
Posted by DNPC at 7:51 AM