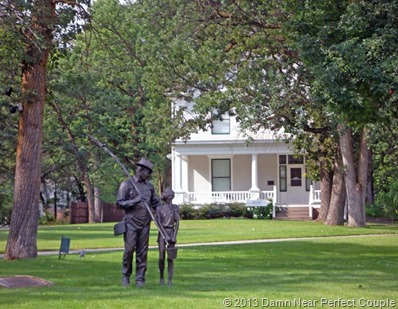 We’ve finished our three-month tour as volunteers at the D.C. Booth National Historic Fish Hatchery, and are back in our travel mode. 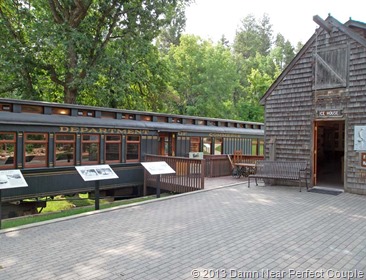 We had an enjoyable time in South Dakota and the hatchery, making new friends and seeing old ones.  The hatchery is a beautifully landscaped place and this year’s rains kept the grass green and the flowers blooming.  Walking around the grounds, the beauty of the 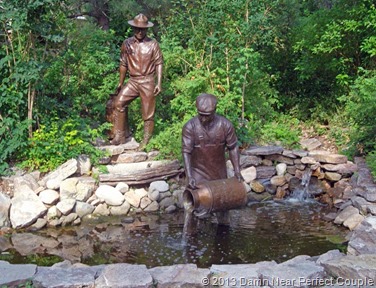 sculptures and restored buildings is enjoyable and relaxing, especially in the evening when the visitors are few and the air is cool.  But the hatchery is all about trout, and watching the children feed the fish in the various ponds was always fun.  With over 150,000 visitors a year and $35,000 in fish food sales, it’s no wonder some of the “display” Rainbow and Brown trout exceed 30 pounds.  It’s a great place and we’ll always remember our time here with fondness, but after two summers, we’ll spend our volunteer time elsewhere in the future. 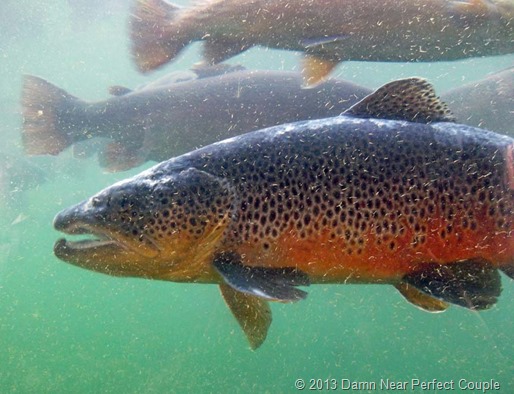 Before leaving, we made a visit to a truly magical place,  Badlands National Park.  Located only a few miles from the Black Hills, the Badlands provide stark contrast from the green forests and meadows of the Black Hills.  Here are miles of barren sandstone rock carved by wind and rain into unusual shapes.  Unlike other times we’ve visited, this was a day of perfect weather – temperatures in the low 70s with just enough clouds to provide contrast to the blue sky.  It’s easy to see why some areas of the park have been used in science fiction films to depict barren planets; many areas look they belong on another planet. 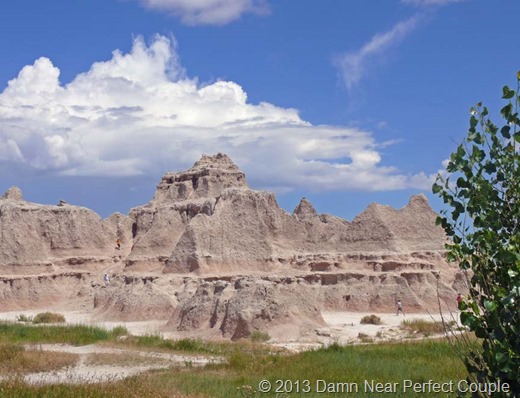 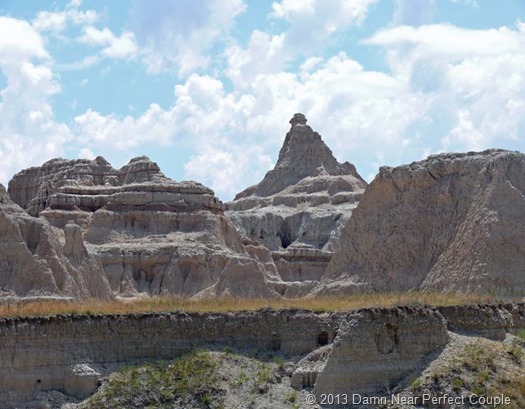 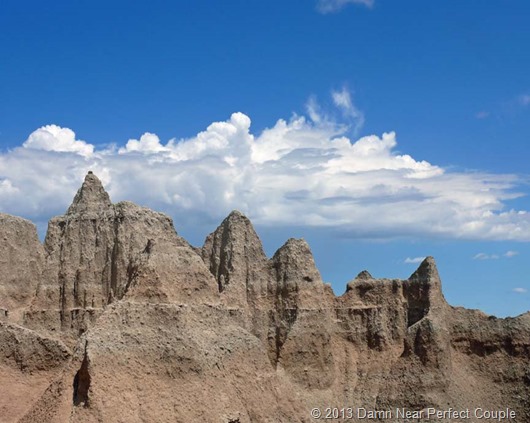 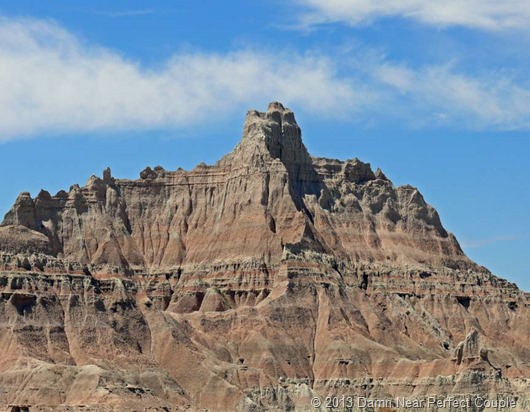 Our trip east took us to Elkhart, Indiana, the RV capital of the world, where every other business seems to be RV-related.  We were visiting Mastertech RV to have our refrigerator replaced.  Those of us who RV generally have two choices in refrigerators, Norcold and Dometic. 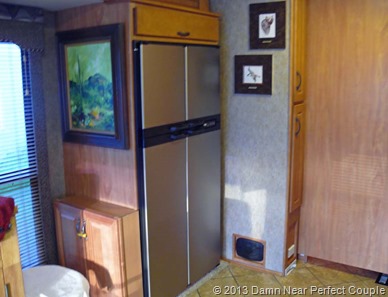 Both of these types, while operating on either electric or gas, heat ammonia to turn it into a gas which when it condenses, acts as a coolant.  Sound a little strange?  Also, it’s under pressure, is corrosive, and can damage your lungs if inhaled.  In the case of our Norcold, the refrigerator had two safety recalls to prevent overheating and possible fires.  Sounds like a great appliance to go bouncing down the road, doesn’t it?  If you own one, you assume it’s only a matter of time before it fails – and ours did, belching ammonia fumes throughout the motor home while we frantically ran fans and opened windows.  The only advantage of the Norcold is that since it can operate on gas, you can camp in the woods without hookups and it will still work.  As long as it doesn’t blow up or set your RV on fire.  So it should be no surprise that we opted to have it replaced with a residential model.  Master Tech RV has a great reputation (as we found out, for good reason), and so we chose them to do our install.  It took a little over two days, but the finished product is amazing – the refrigerator looks like it came installed from the factory. 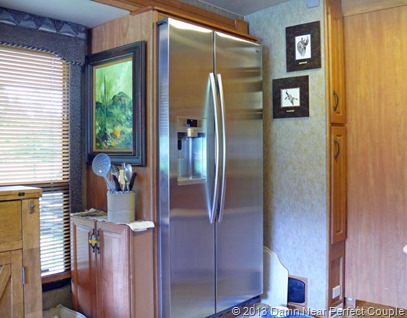 The technicians at Master Tech moved a wall to make more space, recreated shelving and trim to match the existing wood, and installed “travel” latches.  We went from a 12 cubic foot refrigerator to 24.5 cubic feet – and no defrosting or half-melted ice cream!  The refrigerator runs on the inverter while we’re traveling, and we have the generator as a backup – so we have no problem keeping the interior cold.  We’re very happy with the installation and can recommend Master Tech for any RV renovation or upgrade; they’re a great bunch of true craftsman!
We’re in Ohio right now, visiting friends and family.  We had a great visit with friends Kirk and Sue from Dayton, and decided to show them the downtown Cleveland area.  Brown’s stadium, Progressive Field (Indians), and the Rock n’ Roll Hall of Fame were nice, but the real jewel of Cleveland is not downtown, but in an area near the “Flats” called Tremont.  I speak of course of the holy grail of all men’s childhood Christmas dreams – Ralphie’s house from the movie “The Christmas Story”. 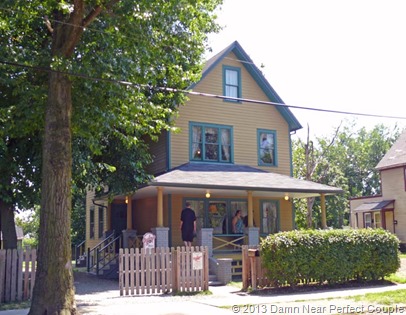 We parked on a side street, and keeping a watchful eye out for the Bumpus’ hounds, entered the old man’s house for a tour.  Kirk quickly zeroed in on every red-blooded boy’s fantasy Christmas present – a Red Ryder 200-shot Range Model Air Rifle!  He so wanted to keep it, but Brenda and Sue sang “you’ll shoot your eye out, you’ll shoot…….” well, you get the idea. 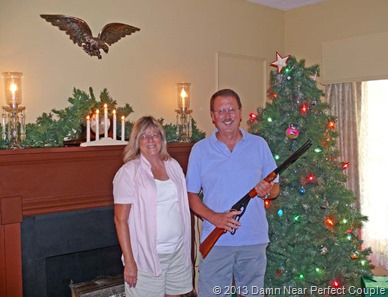 As for me, well, what could be more satisfying than having a picture taken with a major award!  Although we already have a smaller version of a coveted leg-lamp on our dash, we obviously need a life-size version. 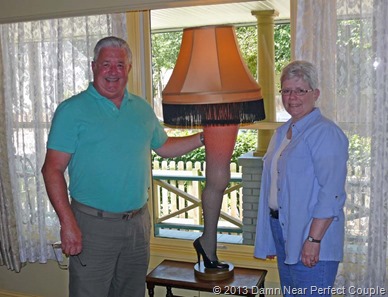 But Brenda (sigh), said I’ve already got a major award, namely her, and the small leg lamp would have to suffice.  Apparently I’m only allowed one major award per household.
We’ll be here for a few days before heading east, so check back on our adventures!
Posted by DNPC at 7:09 PM 5 comments: