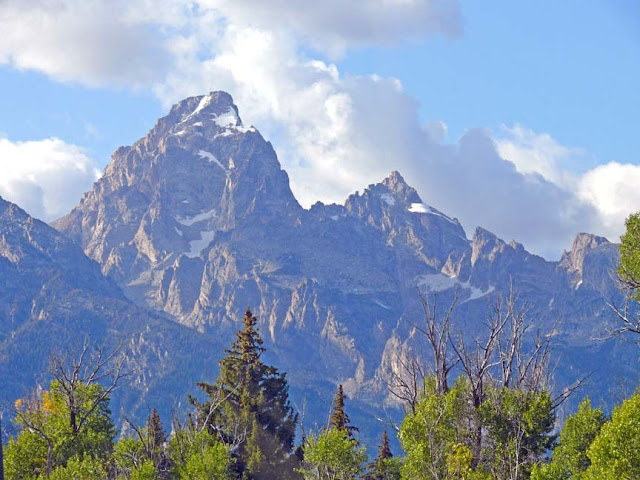 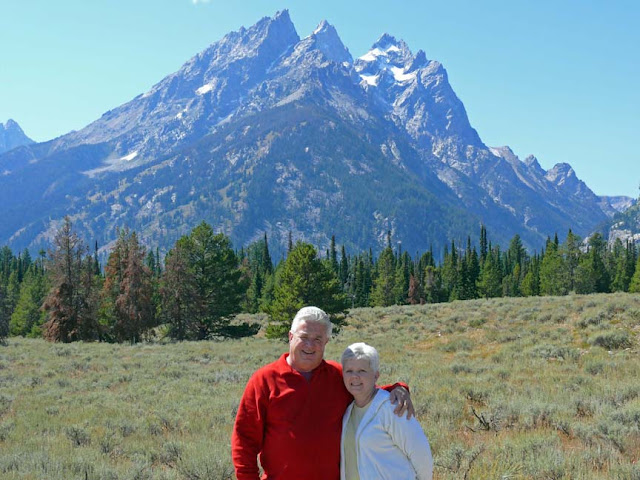 It's a beautiful drive through forest and a gradual descent into Jackson Hole (valley), with few buildings, just a few lakes and cabins. As we approached the valley, the snow-capped peak of Grand Teton, Wyoming's second-highest at 13,770' came into view. What sets the Tetons apart from other mountains is the lack of foothills - there's no gradual ascent; suddenly these huge mountains rise out of the valley. It's an amazing 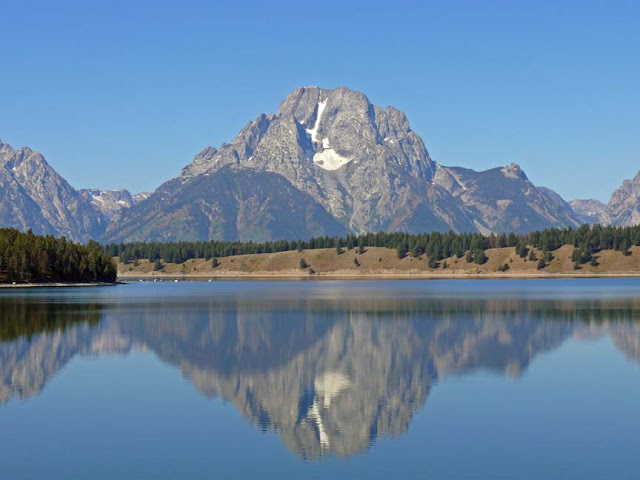 sight, the huge, chiseled mountains against a startling blue sky with the green valley below. We stayed at the Colter Bay RV Park, part of a large, concessionaire-operated complex owned by the Park Service. There aren't many choices in the park; either the full-hookup campground at $52 a night or no-hookup campgrounds at $18 a night. Since the town of Jackson and commercial parks are 40 miles away, there isn't much choice and we stayed three nights in the RV park. It proved to be a good location to sightsee, although it still took a considerable amount to driving to tour the park. As in most large National Parks, there were 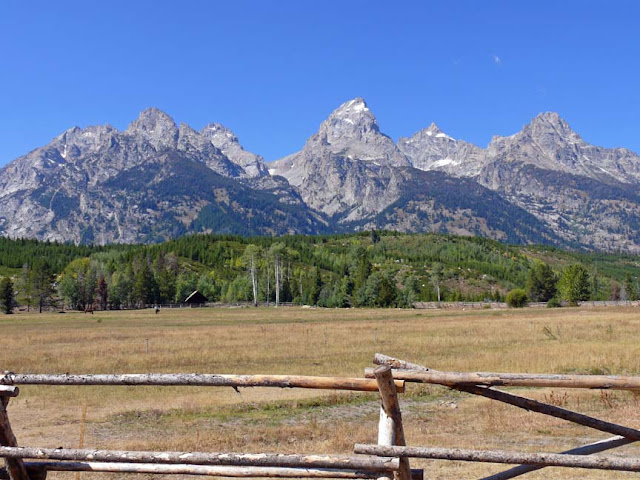 lodges, with restaurants, gift shops, and service stations scattered throughout the park, and all of the restaurants we dined at were surprisingly good and reasonably priced. As in Yellowstone, wildlife was everywhere - we saw lots of elk in the meadows and forests, 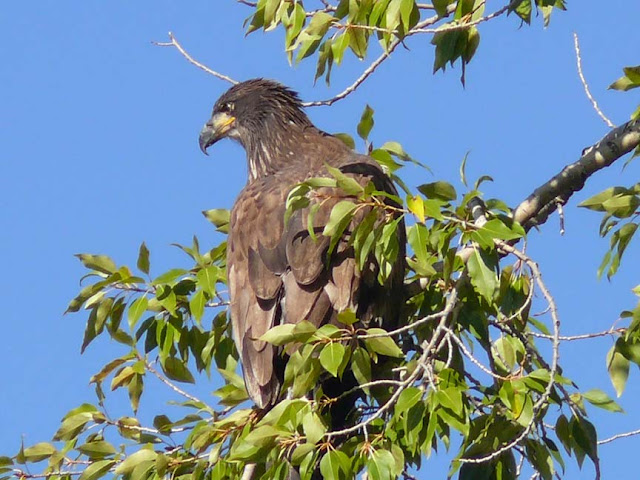 and along the Snake River one morning watched this juvenile bald eagle as he hunted from a tree. The town of Jackson was another example of the modern tourist attraction; "rustic" looking chain stores and gift shops in all directions, all with the same overpriced t-shirts and other authentic made-in-China Wyoming gifts. We didn't spend much time there, it was just too beautiful in the park and exploring the backroads. 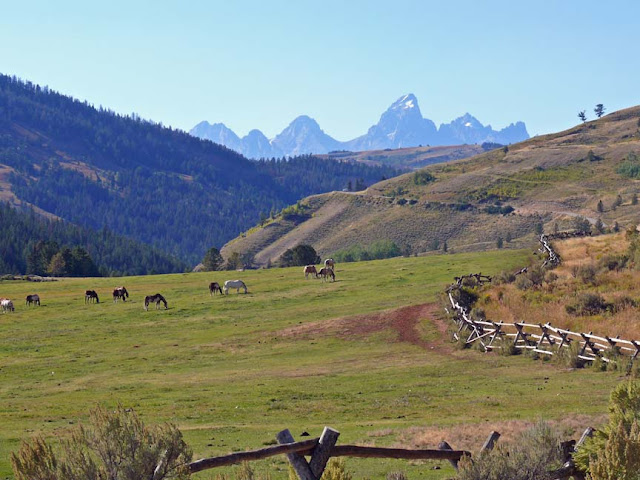 Imagine living on this horse ranch east of the Tetons with this view every morning! It's a truly memorable place to visit, a one-of-a-kind location. We enjoyed our stay, but soon it was time to head south toward Utah and a stay at Bryce Canyon - stay tuned!
Posted by DNPC at 2:55 PM

Charles Kuralt, the great journalist of the "on the road" series, called the Beartooth Highway "the most beautiful drive in America". 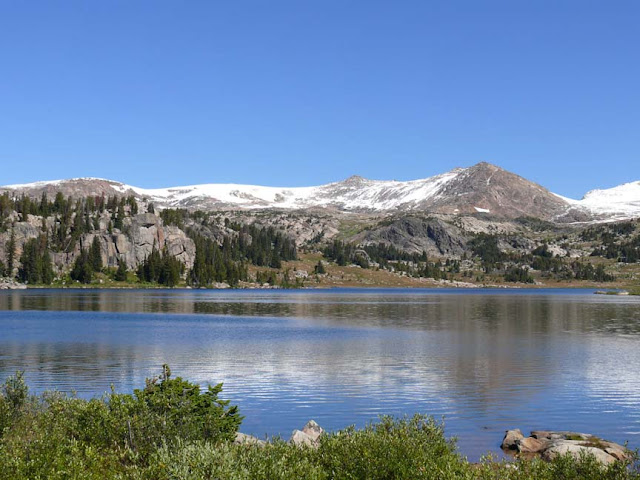 We've wanted to travel this road for years, and after finally having the opportunity, we certainly agree. 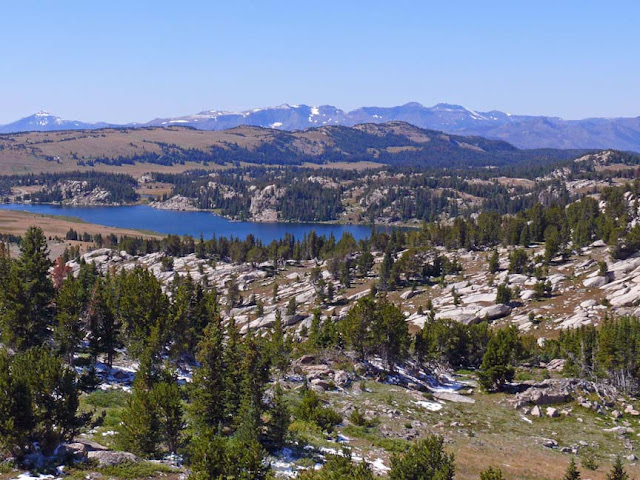 Starting in Cooke City, Montana just outside of the Northeast gate to Yellowstone, the highway winds it's way up over Beartooth pass and down to Red Lodge, MT 69 miles later. Leaving Yellowstone, we stopped for lunch at Cooke City, population 140, for lunch before starting up the climb to the pass. Starting at around 5200' elevation, the road slowly climbed through the 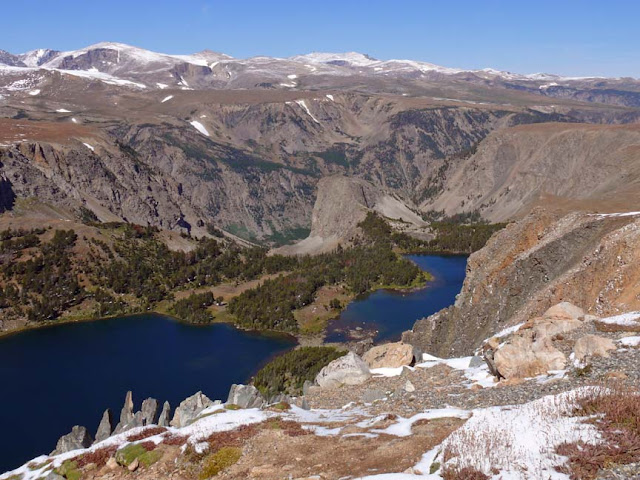 deep forest and soon the trees gave way to a sub-alpine environment. The scenery was amazing; snow-capped, cloud-covered mountains in the distance, deep blue lakes everywhere - each turn int he road provided a new, breathtaking vista. As we neared the summit at nearly 11,000', the "beartooth" rock became visible in the distance.
-->
I d 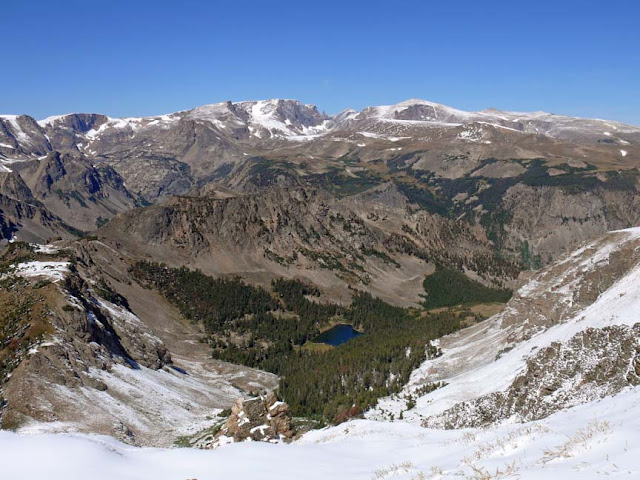 decided at the top to pull over, get out, and take a few pictures.....not realizing that it not only looked like Antarctica, but felt like it, too. As we started down toward Red Lodge, the terrain once again changed; eventually becoming forested again. We descended down a steep section 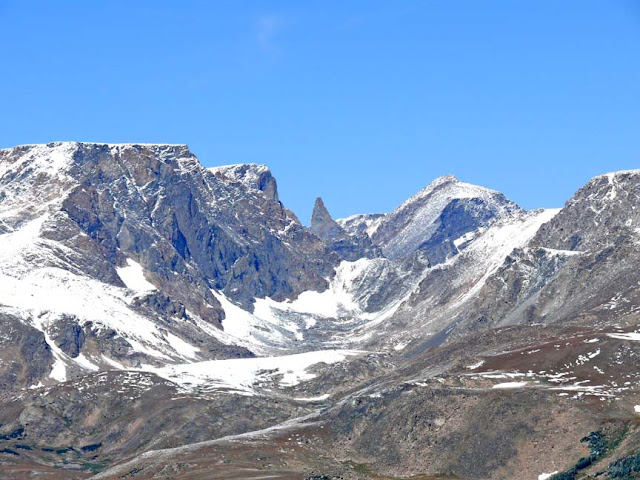 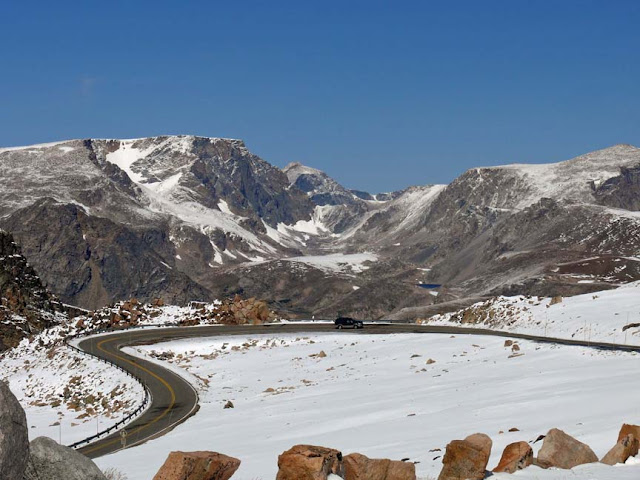 road into a green valley, and then into Red Lodge. This isn't a drive you can describe using words; so I'll let the pictures do the talking. C'mon back & see us in the Tetons!
Posted by DNPC at 2:04 PM

The oldest National Park, Yellowstone is, well.....Yellowstone. There just aren't enough adjectives to describe the often eerie beauty of the park and it's many geological wonders. While it doesn't have the impressive spires of Glacier NP or the vistas of Yosemite, the steaming springs, geysers, beautiful valleys, and wildlife make it one of America's must-visit locations. We stayed in Gardiner, Montana, at the north entrance to the park. One of first things that you realize about visiting the park is the immense size - over 2 million acres. From the north entrance to Old Faithful, for example, was 56 miles of busy, slow traffic. We were surprised how crowded the park was; our experience is that after Labor Day there usually aren't many tourists, but apparently people have learned that September is the best month for wildlife viewing and the number of European visitors is way up due to the weak dollar. The park's geysers and steaming springs are a result of the greater part of Yellowstone being an active volcano. The Park Service has a handy fact page to let you know how safe you are, and the park maps show which part of the park is within the "caldera" so that you can tell that if there's an eruption you'll either be a) vaporized and blown into space (inside the boundary), or b) made into a steaming fossil by the lava flow (outside the boundary). 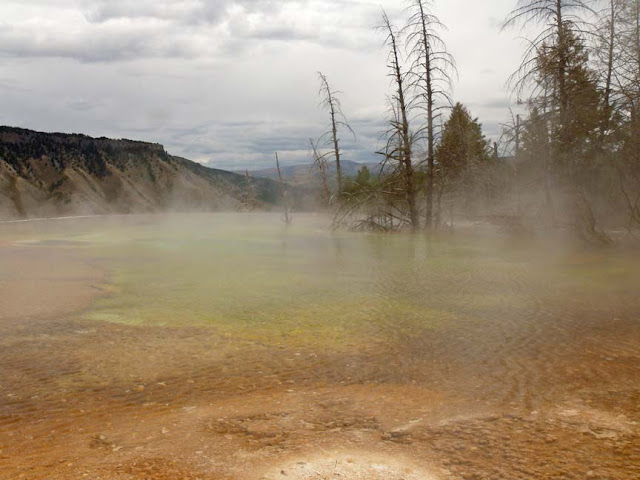 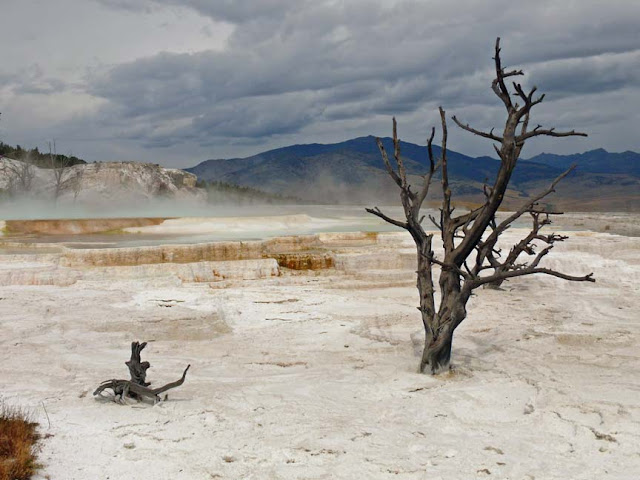 This is not especially comforting. We decided to avoid the overflow crowds at Old Faithful and instead visited the terraced landscape of Mammoth Hot Springs. It's an interesting area of crystal clear steaming water, mineral deposits, and a strong odor of sulfur. Not far from the terraces is the hotel and restaurant area, where the elk have made a home. Rather than forage in forest meadows, they've discovered that the area's manicured lawns are not only tasty but a great place to nap during the day. I feel sorry for the park service employees; two or more are always standing guard around the elk, some with a 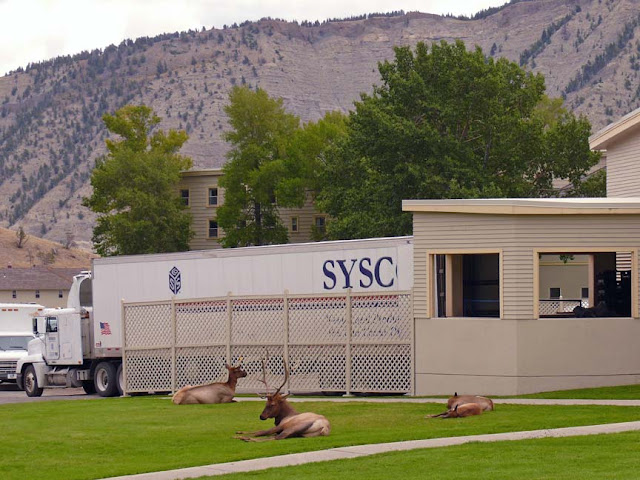 stack of orange traffic cones, to keep visitors from trying to pet or feed them. Another common resident, the bison, have an annoying habit of 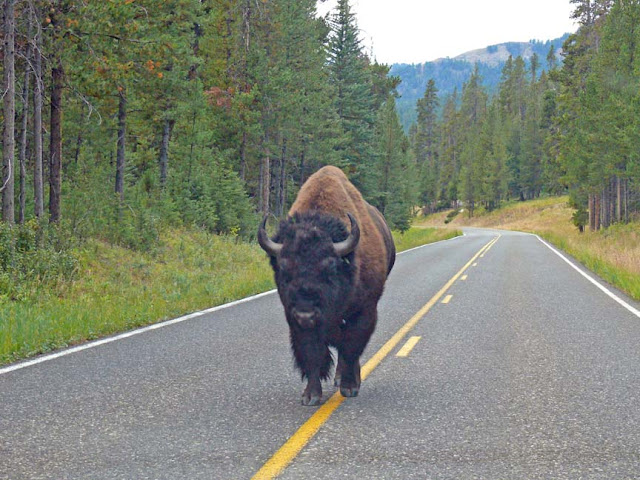 walking down the middle of the highway, and when a herd of 30 or so decide to cross a road, they do it one at a time, stopping everyone for half an hour or so. I guess it's there way of getting even for the "buffalo burgers" served at the local restaurants. On 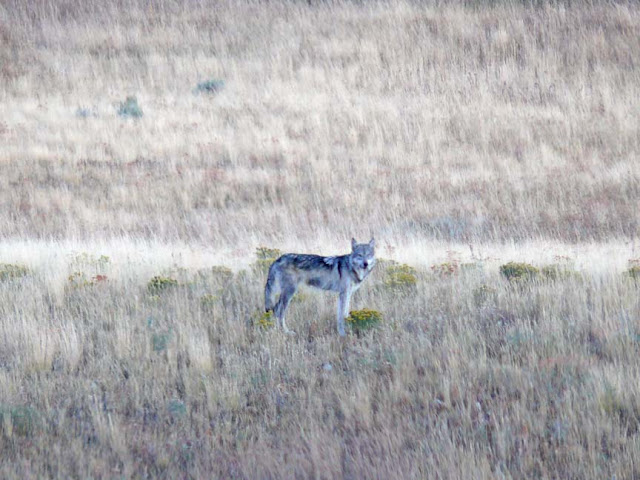 e of the prettiest areas of Yellowstone is the Lamar River Valley in the northeast section of the park. This is the home of the Druid Pack, the first group of wolves reintroduced into Yellowstone and the subject of National Geographic videos. Along with many others, we parked along the road and were able to spot a large black wolf in the distance, but it was too far away for a photo. The next day, while driving during the evening on a dirt road in a more remote area of the park, we came upon this beautiful gray wolf, who watched us for a while before ambling off. Down the road we also watched a huge bull moose grazing, but by that time it was almost dark & again, no photos. During our visit, we also spotted black bear in the distance both on and off the park, so Brenda 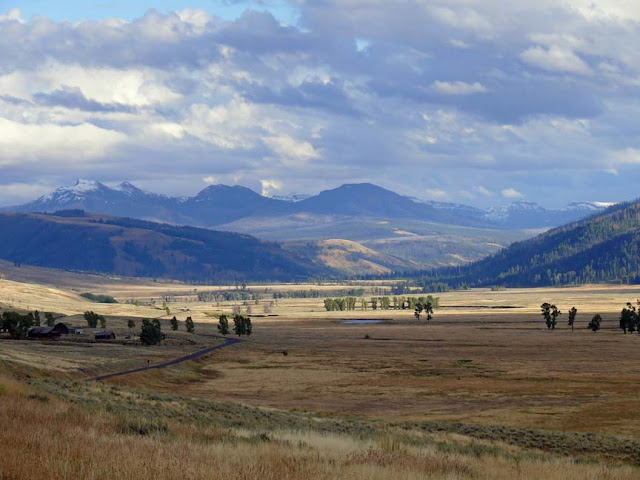 was happy - except that we didn't see a Grizzly bear. The Yellowstone River Canyon and Upper Falls is one of the most scenic areas of the park, and one of the most photographed. Here's another one. 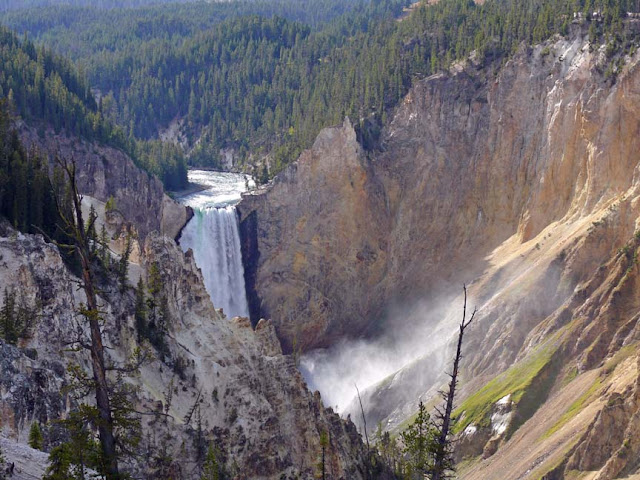 Overall, we had a great visit and were especially glad that we didn't try to see the park in summer; it must be a nightmare with all of the people and traffic. Next stop, the Beartooth Highway!
Posted by DNPC at 11:05 AM 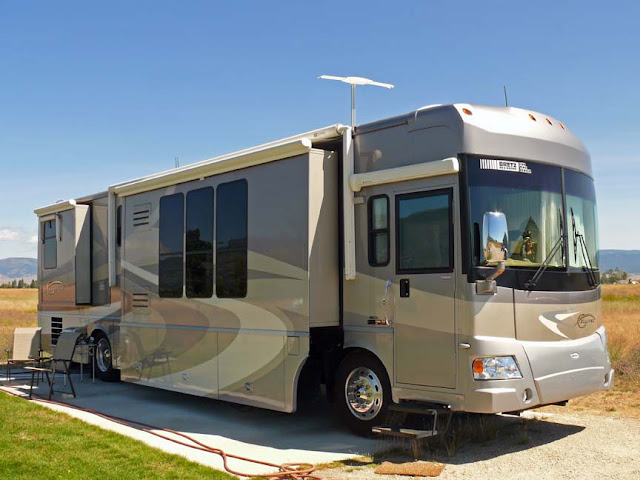 We've finished our volunteer tour at the Lee Metcalf National Wildlife Refuge, packed up the motorhome, and are ready to head south with the migrating waterfowl. I'm writing this from the KOA park in Missoula, where we gave programs during the summer. We're dropping the coach off for an oil change tomorrow morning and thought we'd spend the night here so that we'll have a short drive in the morning. Since I don't have anything new to tell you about our stay at the refuge, I thought I'd give you a quick overview of our new home; a 2006 Itasca Ellipse. Barely used, with only 10,000 miles, it's like new inside and out, and gives us a truly residential feel. 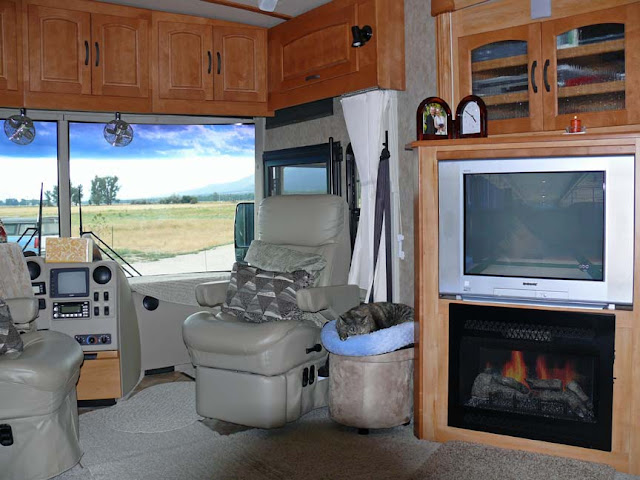 At 40 feet long, with four slides, and weighing in at over 30,000 pounds, it's bigger than our Allegro Bay, but handles about the same. It's a bit more sophisticated; big Catapiller diesel, hydraulic system for the slides and levelers, air bag suspension, and lots of buttons and gauges that I still haven't figured out.....and AIR HORNS! 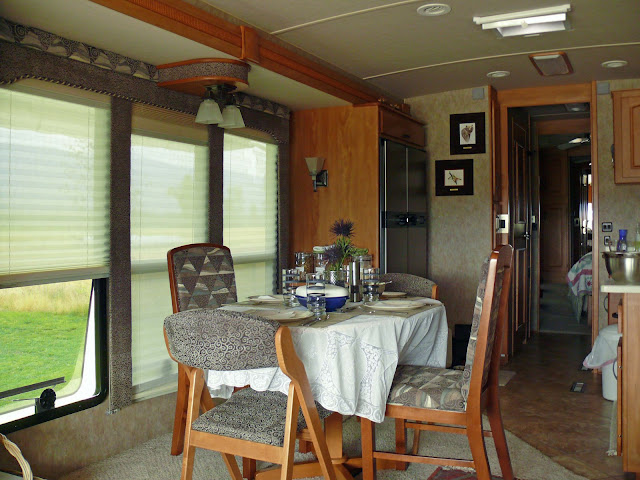 Brenda insists that I bought the air horns and the coach just happened to come with them. It has some very nice features; we especially like the entertainment center that is at eye level with a fireplace (electric) underneath. The dining room table has leaves to seat four comfortably, and the kitchen has a pull-out island that gives Brenda 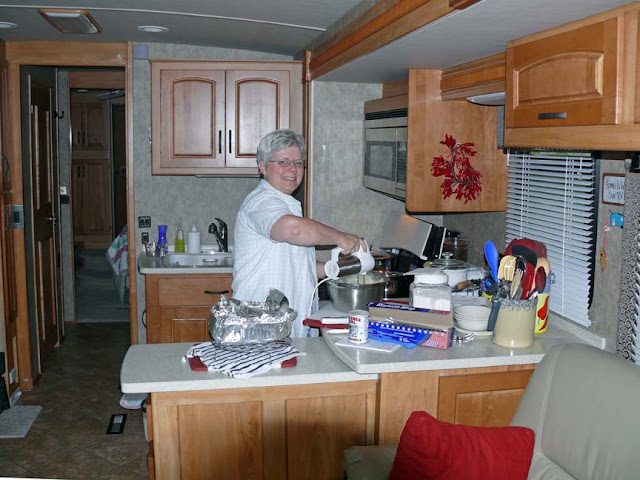 the room and counter space that she's always wanted. The pictures were taken the night we had guests for dinner and Brenda was gaily preparing pork roast, dumplings, and sauerkraut - my bohemian grandmother would be proud! Besides more room, the kitchen also has a dishwasher...no more dishpan hands from drying the dishes for me! With larger holding tanks, more fuel capacity, more batteries, and a solar panel, 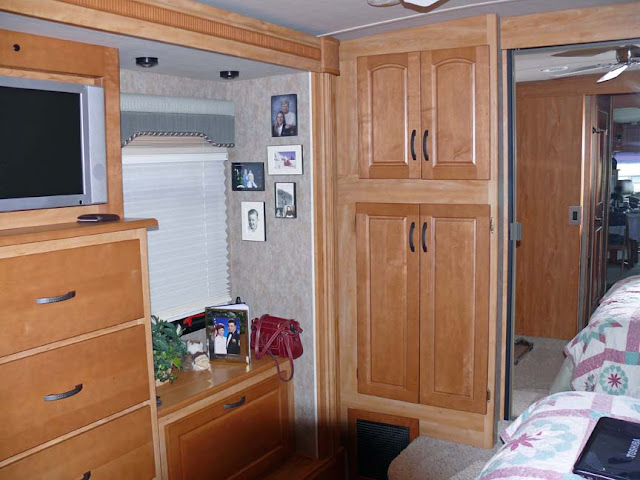 we'll be able to comfortably stay overnight in forest service and state campgrounds without hookups. We're looking forward to trying out all our new systems on our trip south....first stop Yellowstone NP and the Beartooth Highway - C'mon back and see how we're doing!
Posted by DNPC at 7:41 PM