As we slowly migrated northward, we decided to deviate a little out of our way to spend a couple of days in Camp Verde, Arizona and the Distant Drums RV Resort (our review).  We had never visited Sedona, and were intrigued by the stories of it’s beautiful red rocks and majestic scenery.  So on a warm day with the top down, we headed out for a day of…..sitting in bumper to bumper traffic.  To describe Sedona to someone who hasn’t been there, imagine the Grand Canyon.  Then fill it with upscale shopping strip malls, upscale day spas, upscale art galleries (note:  upscale = overpriced), then add the traffic from a Los Angeles rush hour.  Although we were there on an April weekday, every parking lot, viewpoint, and street were full of cars and tour buses. 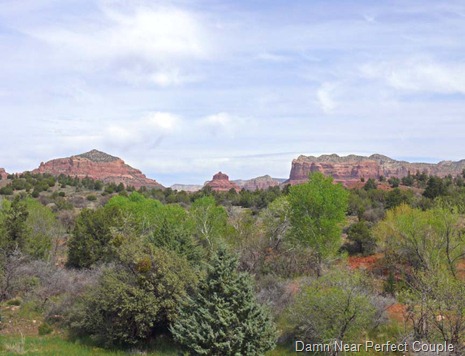 From the visitor center with it’s beautiful views of Bell Rock in the distance, we joined the line of traffic leading into town.  Sedona uses a system of traffic circles, a concept which is demonstrably beyond most visitors.  At each circle, cars entered without yielding, departed the circle without signaling, and I watched one apparently confused senior lady who drove around the circle at least three times……for all I know, she may still be there.  We finally decided to cruise the residential streets, admiring the homes while trying to get a view of those beautiful red bluffs.  The homes here are very, very high end; which is a good thing since their residents are trapped in them most of the time. 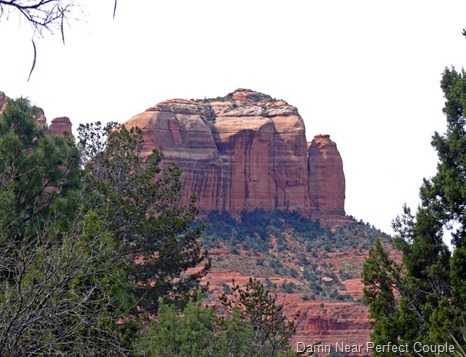 We finally managed to find a parking place at one of the shopping areas, where we had a nice lunch at the Wildflower Bread Company.  Although a chain restaurant found throughout Arizona, their sandwiches are innovative and tasty.  I had the Spicy Cuban, which was amazing.  I really enjoyed it until I visited their web site and clicked on the link labeled “nutritional information”.  AAARGHH……they should call this the “stuff that will kill you” information.  Ah well, at least we skipped the “Ultimate Chocolate Cake”.
Back on the road, we worked our way through another residential area to the parking lot of the Chapel of the Holy Cross, one of the landmark Sedona sights.  It’s a beautiful building, but keeping with the the day’s theme of everybody in the Southwest visit Sedona, the parking lot was full and we had to be satisfied with a quick look before moving on. 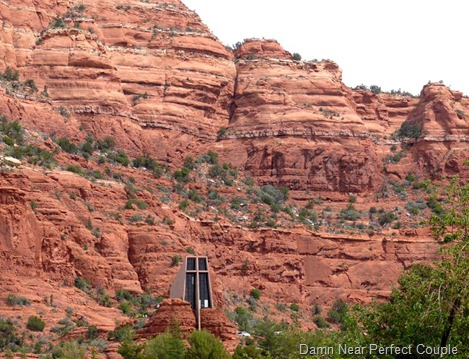 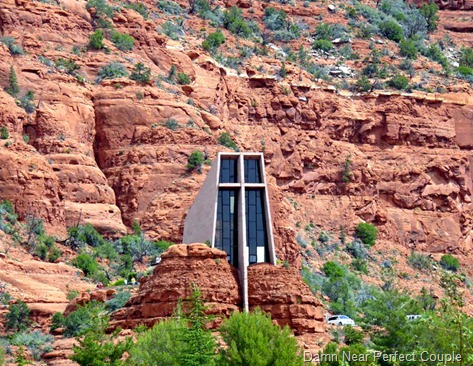 We’re glad we visited Sedona, but frankly we were disappointed with the commercialization of the area.  It’s simply too much trouble to fight the crowds, and there are so many other beautiful areas in this country that are relatively unspoiled.  So we said goodbye to Sedona, and can’t imagine a reason to return.
Near Camp Verde, we visited the Montezuma Castle National Monument, a quiet and unspoiled area outside Camp Verde.  I love the heading of the web site, which says “Would your house look this good 800 years from now?”  We started with a tour of the visitor center, then took the short walk down the tree-shaded path to a view of the “castle”.  They’ve done a marvelous job in shielding the castle from your view until suddenly you walk around a corner and…..there it is!  As you stroll along the walk for the different views, there are placards describing the history of the monument and the people that lived here.  It’s an interesting story with many questions about why it was abandoned unanswered.  It reminded us of the Gila Cliff Dwellings National Monument of New Mexico, similar in their history, type of terrain, and construction.  Unfortunately, while you can tour the inside of the Gila Cliff Dwellings, Montezuma Castle can only be enjoyed from a distance due to the difficult access high on the cliff and because of the large number of people who stop off of the nearby interstate highway to visit. 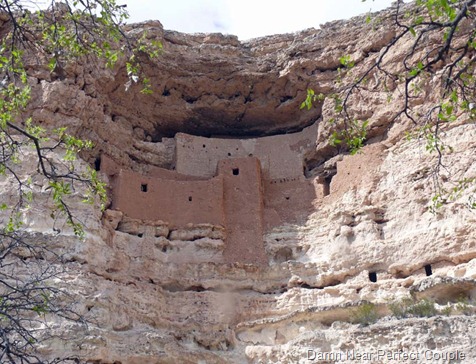 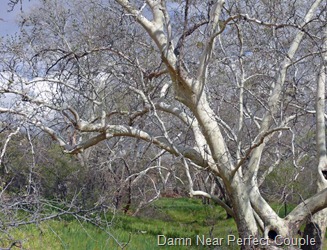 The creek that flows below the cliffs was flowing, the grass was green, and the Arizona Sycamore trees were beginning to bud.  It was a beautiful, sunny day; perfect for a visit to this magical place.  On the walk back to the parking lot, we came across this brightly blooming cactus: 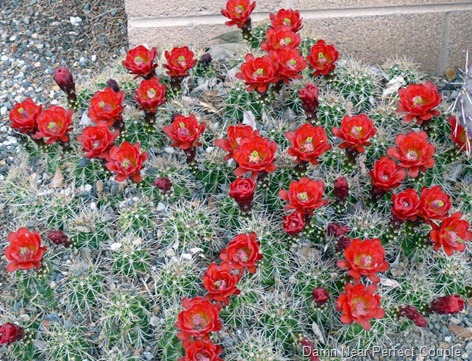 We’ve enjoyed good weather on our travels through so far – we’re off to Las Vegas for a short stay at Nellis Air Force Base before continuing on our journey to Oregon.  Stop back and check with us!

We’ve left Texas after what seemed like days of driving across desolate stretches of I-10….oh wait, it WAS days of driving!  It’s always intimidating when you cross the border into Texas from the East and see the first mile marker – 880!
But we made it to Tucson after a stop in Las Cruces for enchiladas and chili Rellenos at La Posta, and we spent a week at Lazy Days RV Campground  meeting our daughter Kim and husband Bill who flew in from Los Angeles.  This was Bill’s first time in Tucson, 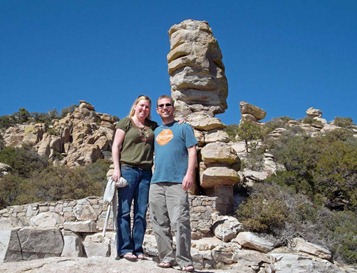 so we played tour guide and spent a few days showing them around the area.  We started by taking an easy drive  up  to Mount Lemmon high above Tucson.  It’s a real contrast from the valley floor; pine forests, cool temperatures, and interesting rock formations. 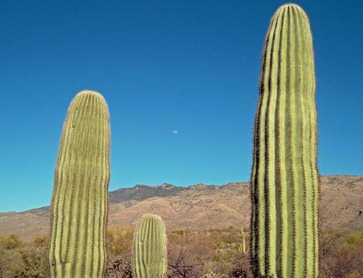 We visited Summerhaven, the small community at 8200 feet, still recovering from a devastating fire in 2003.  Coming down the mountain, we headed to the East side of town and Saguaro National Park, a beautiful area that reflects the best elements of the area – towering saguaro cactus, blooming Ocotillo, emerald green Palo Verde trees, and miles of beautiful vistas.  Working up an appetite seeing all the scenery, we headed for dinner at the Pinnacle Peak Steakhouse, a place we’ve dined at since 1971, for a couple of Big Cowboy Porterhouse Steaks, cooked over an open mesquite fire.  We had a great time watching people who wore ties get them cut off to the clanging of a cow bell, and afterward browsed the shops, and  watched a bit of the nightly gunfight show.  The perfect ending to a great day. 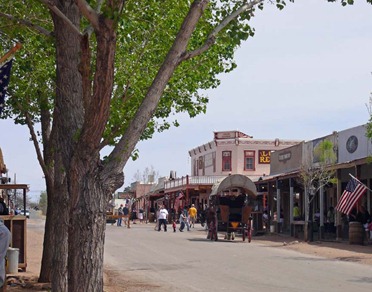 The next day we headed for Tombstone, the “town too tough to die”….as long as the tourist dollars keep coming.  It’s a blend of interesting history (Wyatt Earp, gunfight at the OK corral), and annoying touristy exhibits, all for a hefty admission price. 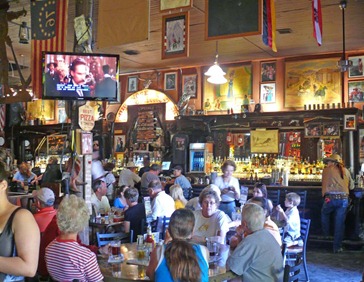 Gunfight at the OK corral reenactment?  Mine tour?  Gunfight?  Stagecoach ride?  Birdcage Opera House?  Bring your wallet, they all have an admission fee.  The only attraction that doesn’t is one of the most interesting; the original “Boot Hill”, which is maintained by the Chamber of Commerce.  After lunch at Big Nose Kate’s saloon, we explored the town, then headed for Boot Hill. 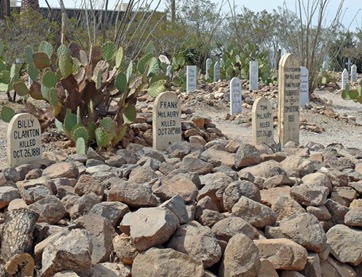 After a walk through the historical and often funny gravesites – “Here lies Lester Moore, four slugs from a .44.  No Les, No more”.  The website has a row-by-row description of the occupants and makes interesting reading.  You can view it here.


We spent the better part of a day visiting the Pima Air and Space Museum, the largest private air museum in the country.  Being next door to the “boneyard 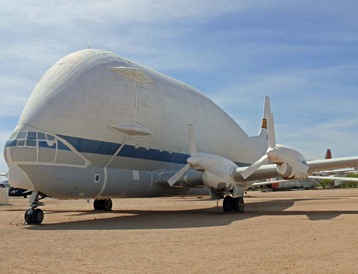 ” of aircraft at Davis-Monthan AFB has resulted in the museum obtaining an extraordinary number of aircraft for display, with over 300 aircraft in both indoor and outdoor exhibits.   Just about every type of military aircraft is represented here, along with some unique aircraft like the “Pregnant Guppy”, a modified KC-97 used to transport oversized cargo for the space program. 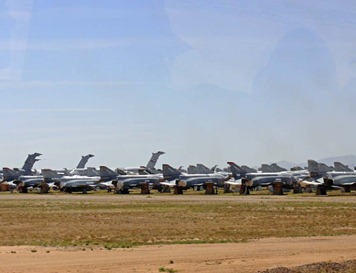 We took the bus tour of the Aerospace Maintenance and Regeneration Center,  where aircraft that have exceeded their lifetime or are no longer needed are stored.  When I was stationed here in the early 70s, there were between eight and ten thousand aircraft here; now there are a little over four thousand. 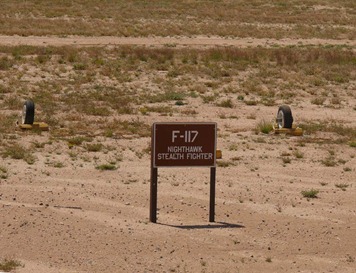 The tour took us past rows and rows of aircraft, including a “show row” where aircraft had signs to tell you what they were.  As we learned from our tour guide, only the wheels of the F-117 Stealth Fighter are visible in the “stealth” mode…….a little bit of humor in an otherwise serious experience.


One of the most interesting places in the area to visit is the Titan II Missile Museum.  From 1963 to 1987, 18 of these sites were scattered around Tucson, on alert 24 hours/day, capable of delivering a nine-megaton nuclear weapon to any target in the Soviet Union.  The museum is an actual Titan II site that has 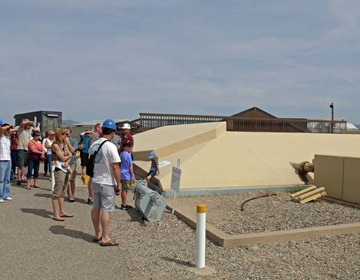 been preserved just as it was, including the missile (inert, of course), crew capsule, and support equipment.  The tour guides are all former missile crew members, and their personal knowledge of how these incredibly destructive weapons were maintained is fascinating. 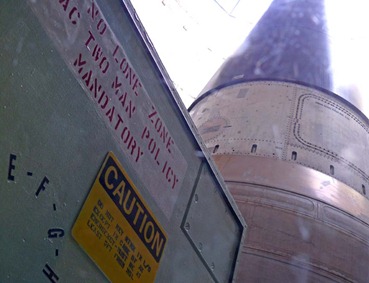 It’s hard to believe that these missiles, with a weapon that would destroy anything in a 300-square mile area, were functional in an era of rotary-dial phones and computers with less power than your phone.  It’s a both fascinating and sobering experience to sit in the crew capsule as the tour guide conducts a simulated launch; a truly worthwhile place to visit. 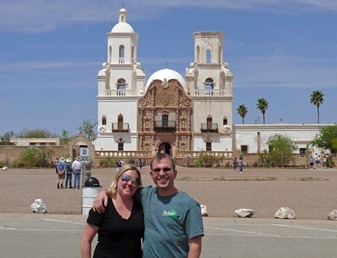 To end on a more uplifting note, we stopped at the Mission San Xavier Del Bac, also known as the “White Dove of the Desert”.  Completed in 1797, it is still in use today and can be seen for miles with it’s bright white walls and bell tower.  We always enjoy visiting the mission, although it’s become more tourist oriented over the years.  Where in years past there were only tribal members selling crafts, there is now a “gift plaza” – it won’t be long before they’ll build a “mission mall”. 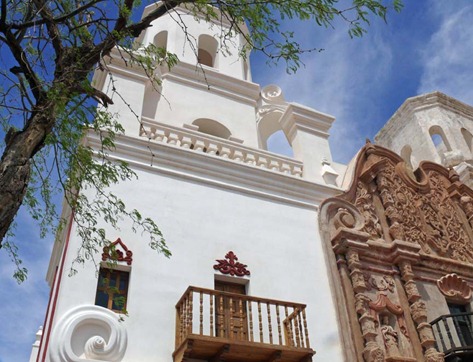 We had a great visit, but now it’s time to pack up and continue our journey, so we’re off to Northern Arizona for a few days.  Be sure and check back and see how we’re doing!
Posted by DNPC at 9:45 PM 2 comments: