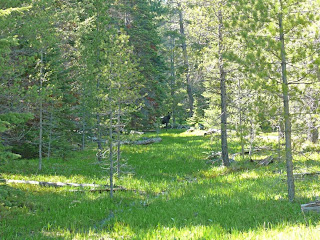 Those of you who have followed our adventures know that since starting to spend our summers in Montana back in 2005 we have been on a fruitless search for a moose to satisfy Brenda's need to see, and possible adopt, every animal on the planet. I've often remarked that with all of the money we've spent on gas driving mountain roads, we could have bought our own moose. But finally, last week on a road trip deep into the mountains west of the Big Hole valley, we SAW A MOOSE! Driving down the mountain road, I caught sight of the critter, slammed on the brakes, backed up, and there she was......a young cow (I think, no calf), watching us from back in 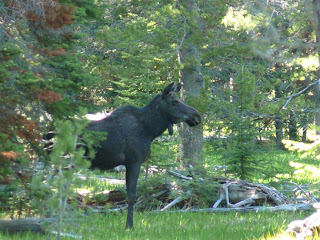 the woods. She stood there quietly watching us for some time while Brenda marveled over her....bigness, before becoming bored with the whole thing and wandering off into the woods. It was actually a memorable day; during the trip we saw white tail deer, mule deer, elk, and the moose - the entire deer family! The area around the Big Hole is beautiful and it's an unusual place - a valley floor at 6700' with snow-covered mountains in the distance. The valley is covered with cattle; more are raised here than any other county in the U.S. and far outnumber people - the total population is only 900 and the largest town, Wisdom, has only 75 residents. It's a quiet place, 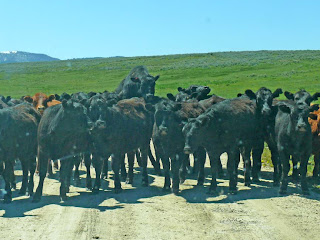 although the cattle sometimes amuse themselves by forming roadblocks to keep visitors from visiting all of the secret moose hideouts. This group was happy to hold us up while some of the younger ones in the back seemed to be engaging in some type of hanky-panky..... It was a great day to explore - the weather has finally moved into summer after a month of cold weather and snow in the mountains. The June snowpack in the bitterroots is estimated to be 220% of normal, and the rivers are still near flood stage and are forecast to stay that way until the end of the month. In Glacier NP, the famous 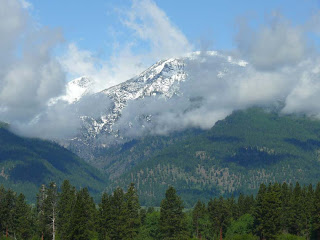 Going-to-the-Sun Road may not open until after 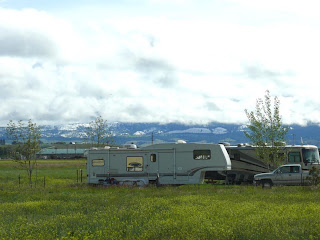 July 15th, and since it begins snowing in late September, it looks like a short season. Here, we've been treated to views of deep snow in the Bitterroots and Sapphires, which hopefully will contribute to a summer without significant wildfires. This is the year I've decided to try fly fishing, so naturally all of the rivers are too high to even think of getting close, let alone fish. We've been exploring all of the famous Montana trout locations; the West Fork of the Bitterroot, the Big Hole river, and yesterday we drove over 45 miles along Rock Creek. With my luck, all of the trout will be washed into the Pacific before I get a chance to get out and thrash the water. And if any of the rivers is wider than 15', I'll never get a fly close to the other side.
The snow and warm weather provide and interesting contrast; on our way back from the Big Hole, we stopped by Lake Como, a popular 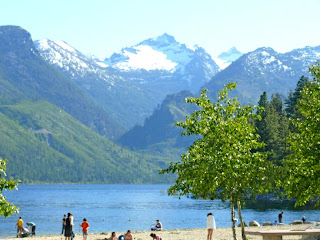 swimming and fishing lake next to a mountain formation resembling the Como Alps of Italy. The water is fed by the snow coming off of the mountains but there were still a lot of kids in the water...but no adults. After a nice dinner at a rustic-cabin-lodge-type restaurant called Bradley O's, we headed home where Brenda crossed "moose" off of her must see list, leaving "wolf", "mountain lion", and "Sasquatch". Looks like more money for gas will be needed. We'll gladly take personal checks or Pay Pal. 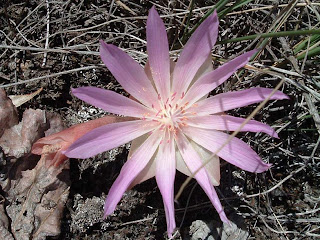 We're staying busy, this week we gave a program at the Missoula KOA, Sunday is a "Behind-the-Signs" tour, and next week we're giving a program at a National Forest campground. This has been a wonderful time here; we're really happy being interpretive hosts instead of just staffing the visitor center. We'll leave with a picture of the Bitterroot flower, the flower that gave the valley and mountains their name. Until next time, enjoy your summer and come back and visit!
Posted by DNPC at 4:08 PM No comments: 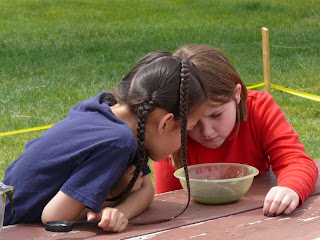 It's been a busy time here at Lee Metcalf NWR; schools here are still in session until June 6th, and many area schools are taking the opportunity for one last field trip out to see us. Today, for example, Brenda is teaching over 60 elementary school kids about water biology. Using samples of pond scum and water, she gets a lot of "oohs" and "eeyous" showing the kids what's in the water using microscopes and magnifying glasses. Today's class has brought lunch and afterward will get rides on horse-drawn wagons as they tour the refuge. It's really gratifying to work with the youngsters, especially the 1st thru 3rd grade; after that it gets progressively more difficult as texting, preening, and social interaction become more important. 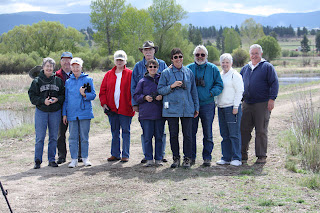 Hopefully some of them will retain an interest in nature and return as adults to enjoy the refuge. We've also been busy conducting "Behind the Signs" tours, taking groups into the closed portion of the refuge on guided trips. The tours have been very successful, I think in part because we all enjoy going someplace that's normally closed to us, but also because they have an opportunity to see wildlife not seen elsewhere. Porcupines in trees, ducks with babies, osprey, bald eagles and chicks, grebes and sandhill cranes.....some have even claimed to have seen Jimmy Hoffa lurking behind a tree! The folks have all been appreciative of the tours and we've had a lot of fun doing them. We've also been working on a presentation to educate RV'rs at local campgrounds on the benefits of visiting the refuge. We're working with three of the largest RV parks in Missoula, and as the tourists begin to arrive for the summer season, we expect to be giving the presentation on Friday and Saturday evenings. We've also been hiking and touring the area and although Brenda is still "Mooseless in Montana", we've seen a variety of interesting wildlife. Standing on the banks of the Bitterroot river watching the torrent as the mountain snow melts, we watched this mink come roaring up the bank with what looked like a mouse in it's mouth. 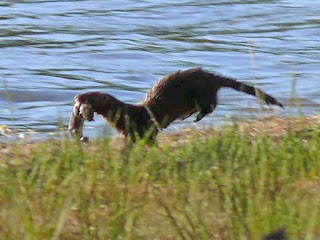 It was only later when I expanded the picture that it was clear that she was carrying a baby; probably relocating it from a flooded den. On a drive to south end of the valley, we watched bighorn sheep graze along the road. The ewes 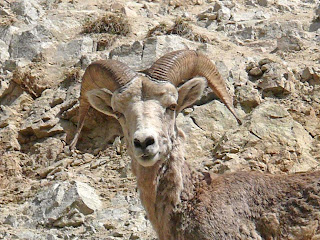 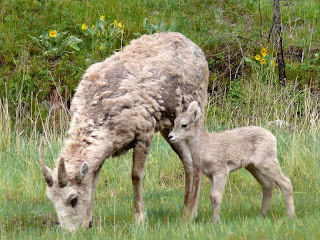 with their kids were quite relaxed as we stopped and took pictures - the kids were jumping around and playing; it was quite a sight! There are still many ducks on the ponds; most will stay here the summer and we're starting to see ducklings following their mom around on the water. We found this beautiful cinnamon teal pair on a pond along the trail. 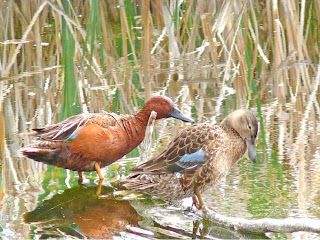 You can see by the male (on the left) how they got their name. The ducks are probably still here because they're confused - it's been cold and rainy, much like April. This year's snowpack was 157% of normal, so we expect the rivers to remain high for the rest of the month. At least it bodes well for a wet summer; last year was hot, dry, and resulted in a busy fire season. We'll continue to explore in spite of the weather, after all, there's got to be a moose out there somewhere......tomorrow we're going to "town" (Missoula), it's Brenda's birthday and I promised her dinner at the restaurant of her choice (Golden Corral or Ryan's). I'll close with this picture of the beautiful tree swallow, very common here but still stunning when the sun reflects off of it's iridescent feathers. C'mon back and see what we're up to! 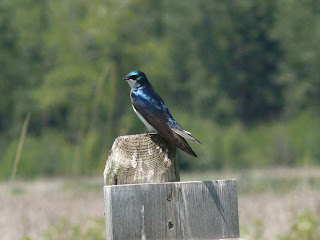