While reading about things to do in Southern Arizona, we came across an article on the Buenos Aires National Wildlife Refuge, a 118,000 acre area near the Mexico border. Interested in the possibility of seeing Pronghorn and a new area, we decided to make a day trip to the refuge, then circle around to Arivaca, Arivaca lake, and the Ruby road (35 miles of dirt) to Pena Blanca lake. While stationed here in the early 70s, I used to fish these small lakes and was interested in seeing how they had changed. 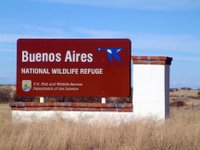 Our visit to Buenos Aries started as a disappointment; driving the washboard dirt 10-mile Pronhorn viewing loop was pretty boring - lots of hills & cactus, but no pronghorn. 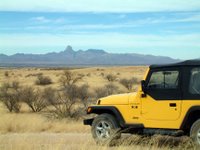 We took a picnic lunch, and because it was a bit cool, decided to pull in to an area under the trees and eat inside the Jeep. While eating, we were visited by a large Bobcat who posed for us while we took pictures. We were amazed that it was out roaming during mid-day; of course, Brenda wanted to take it home. Once I explained that she wouldn't have to worry about it sharing food with her cat, that her cat would be the food, she decided that the bobcat should stay in the wild. It truly was a beautiful animal and made the trip worthwhile. 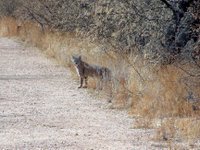 Afterward, we chatted with the administrator and learned that they have an RV area for volunteers. We may decide to volunteer here next winter if we return to the area. From there we drove to the small and remote town of Arivaca. It's kind of a quaint little conclave of people with one store and a few places to eat; one of those places where sniffing the night air might make you start to see things and feel really good. From there it was 12 miles of bad dirt to Arivaca lake, a small (40) acre lake in the foothills. Remarkably (to me), nothing has changed, except that the water level is a bit lower due to the ongoing drought. After a brief walk around the area, it was off to Pena Blanca lake. The drive took us through some of the most beautiful canyons and grasslands we've seen. 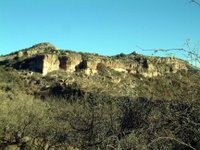 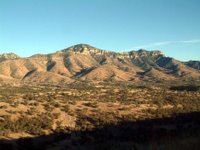 Arriving at the lake, I was surprised to find that the motel, bait store, and boat rental concessions that I'd remembered had all disappeared, an attempt by the state to return the area to a more natural state. The daylight was fading, so we headed east to connect with I-19 just north of Nogales, AZ. Getting to the freeway, we were amazed at the miles of truck depots along the interstate, apparently a result of NAFTA. After a quick stop by the Border Patrol to make sure we weren't smuggling any illegals (or bobcats), we headed home.
Our next trip was to one of our favorite areas, Sabino Canyon, unique in that it is so close to the urban area of Tucson yet so remotely beautiful. In the 70s, we would drive to well into the canyon, but now you must walk (3.5 miles) or take a shuttle. We decided to compromise by taking the shuttle and walking out, since it would be mostly downhill. All along the road were large red signs warning of mountain lions and steps to take if approached by one. I explained to Brenda that we only had to run faster that the slowest person around, and there were a lot of senior citizens so we should be OK. We had a great day and once again marveled at the beauty of the canyon. 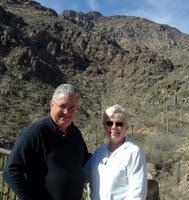 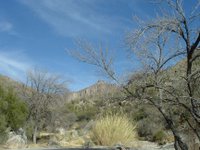 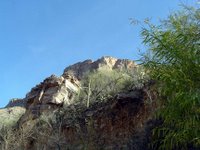 For all our friends back in the midwest, wish you could be here enjoying the weather and the scenery with us. And for all the weather professionals back in Dayton, this is the place to be - every day's forecast is the same, just add one degree of warmth through August.
Posted by DNPC at 9:01 AM No comments: 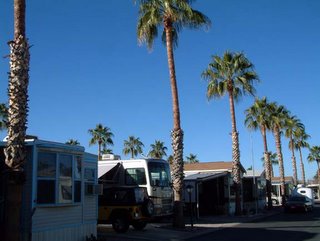 We've settled into our home for the month of January, the Rincon Country RV Resort on the east side of Tucson. Although there are a few RVs, most of the park residents are "snowbirds" who have a park model or mobile home and commute from the northern states. Lots of Michigan, Indiana, and Wisconsin license plates on vehicles this time of year. It's a very nice location with beautiful facilities and planned activities, nicely landscaped with palm trees and cactus. We decided to take a trip to Mt. Lemmon, and since we have the Jeep, drive down the back side. The road from Tucson to the top is paved and well maintained, and leads to a ski area and the small community of Summerhaven, much of which is still being rebuilt after the Aspen fire of 2003. Not many people know about or 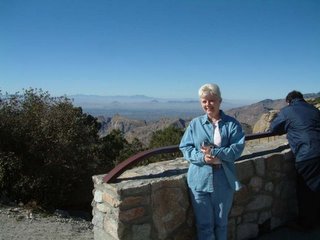 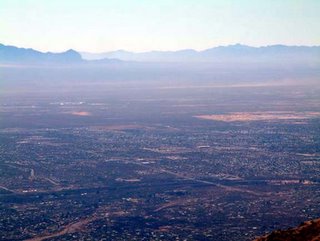 drive down the back side, for good reason. From the top, it's 29 miles of rugged dirt road to the town of Oracle, and is not maintained. Stocked up with water, tools, and a topo map, off we went. On the paved road to the top, we stopped at the Windy Point vista, where we were able to see the drastic growth of Tucson since we lived here in the early 70s. After lunch at the ski lodge restaurant (still 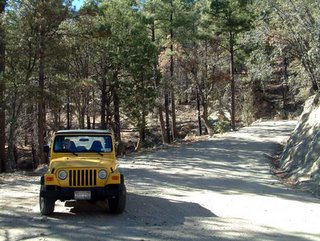 no snow this year), we headed down the back side. The scenery was beautiful for the first 5 miles or so while we were in the forest; and we had plenty of time to enjoy it at 10-15 mph over the ruts and rocks. The terrain gradually changed to scrub trees, and finally to desert. Throughout the 2-hour trip, we only saw one other person; a ranch hand on an ATV checking water holes. At Oracle, I decided to take a back road for what I thought was a 30-40 mile trip to Benson where we'd join the interstate back to Tucson. As it turned out, my map skills were not with me, and it was double that and took 3 hours on some of the most beautiful dirt road we've ever been on. The road followed the San Pedro river southwest from Mammoth through ranchland and a mix of desert and river bottom. We passed many working ranches and even ran into a herd of Javelina on the road. Unfortunately, the drought has taken it's toll; many ranches were up for sale and the hay fields along the river were dry and dusty. We finally arrived in Benson just before sunset; the end to a perfect day of exploring.
No trip to Tucson is complete without visiting the Sahurao cactus, and on Friday we were off to the Sahauro National Monument just west of Tucson. We crossed Gates Pass and the Old Tucson studios, drove past the Desert Museum and entered the monument area, which stretches for miles along the foothills. Once again, we ended up on a dirt road and were glad to have the Jeep. We hiked the Valley View trail to the top of a hill which gave us 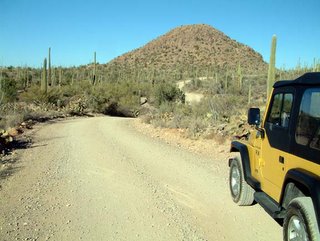 a great view of the sahuaro 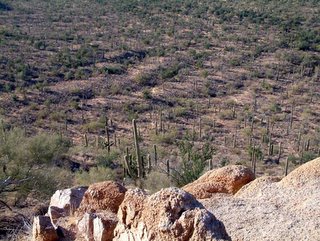 "forest" below. Returning to the paved road, we headed back to Gates Pass to join the crowd that gathers each evening to watch the sunset. It was the perfect end to a great day; the sun setting in the west, and a beautiful moonrise to the east. 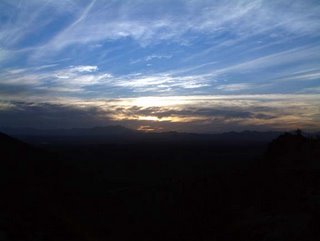 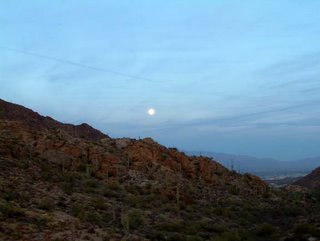 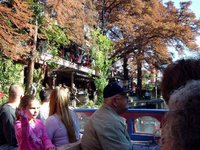 We arrived in San Antonio to bright sunshine and warm temperatures and headed for our favorite lunch spot, Schilo's German Deli. After lunch, we headed for the riverwalk, explored the shops, and took a ride on a tour boat. As always, the riverwalk and downtown area were beautifully decorated for the holiday season; unfortunately, we arrived too late in the month for the luminaries and Christmas pageant. Our friends Tom and Janet Parcenue graciously included us in their holiday plans, and we spent Christmas Eve and day with them and their friends. We always enjoy visiting San Antonio, so many places to see and things to do; but since we have a 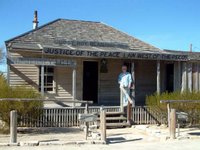 commitment in Tucson, we left on the 26th and took the highway to Del Rio, Langtry, and eventually to spend two nights in Alpine, Texas. We stopped in Langtry to visit the home of Judge Roy Bean and were impressed with the history of the area - although seeing the place makes you wonder why in the world people ever came here (its pretty desolate). The state visitor center has restored many of the original buildings, including the combination saloon and courthouse known as the "Jersey Lilly". Back on the road to Alpine, I noticed in the rear view mirror what looked like black leaves scattering behind the Jeep as I drove. Since there weren't any trees within 100 miles, I pulled over to check and found that the left rear tire of the Jeep was a bit "low" on air. Since we were well out of the range

of any cell phone service, I pulled out the jack & changed the tire. Fortunately, because there is little weight on the rear of the Jeep, the rim wasn't damaged. Continuing on the Alpine, we discovered a wonderful little town that the local tourism office advertises as the "Taos of Texas". While that may be a bit of a stretch, we found shops, friendly people, and great restaurants, including a real treasure, the Edelweiss Restaurant and Brewery, (www.edelweissbrewery.com), located in a restored 1880s hotel . The owner/brewmeister still has a heavy German accent and offers a variety of locally brewed beers, and the food was wonderful - try the Jaeger Schnitzel and Bavarian pancakes, they're incredible. After a side trip to Ft. Stockton for a replacement tire (strange, they couldn't repair the old one), we were off to Las Cruces, NM. One of our favorite restaurants, La Posta, is located close by the the town of La Mesilla, and old stage stop and plaza. First opened in 1939, La Posta was once featured in Life magazine and manages to transform simple enchiladas and salsa into something magnificent (www.laposta-de-mesilla.com). Try my favorite, the stacked green enchiladas with a fried egg, or Brenda's the chile rellenos - everything is excellent and the prices are very reasonable. Hmmm...notice how much of our travel experience revolves around food. Anyway 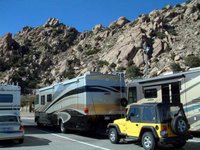 , the next day we were off for Tucson. On the way we stopped at the Texas Canyon rest area for lunch, one of our favorite spots, even if it is on an interstate. This area was used as a filming location for westerns in the 1930s and 40s and looks like the opening scenes of the old Lone Ranger TV series. We arrived in our current location, the Rincon East RV Resort in Tucson, where we connected with our Dayton friends Kirk and Sue Burmeister who are former residents and are were visiting their children. We made the obligatory trip to Pinacle Peak, a western steakhouse that features a 32-ounce Porterhouse....see, here we go again with the food. Oh well, we'll be here for another month or so and will try and do a better job of keeping this site current.
Posted by DNPC at 7:57 AM No comments: