Wrapping Up Our Stay 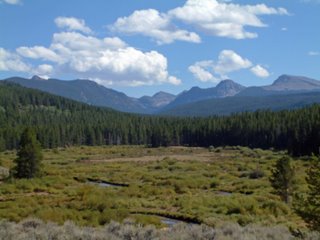 It's hard to believe, but in two weeks we'll be leaving what has been our home for the past five months - and what a wonderful time it's been! It will be a bittersweet departure; we've made many friends and haven't yet seen all the sights on our list, but also are anxious to get back on the road. Brenda and I have been busy finishing up our refuge projects and getting the motorhome ready for the road. We've arranged the interior and exterior storage areas, waxed the exterior (there's a LOT of paint on this thing), and plotted our route eastbound back to Dayton. We plan on visiting Glacier National Park next week, coming back for the weekend, and then leaving here the 19th for Dayton. We'll spend a week there, travel north to visit Brenda's family in the Cleveland area, head over to Johnstown for a few days to see friends, then head southbound to Texas for our next volunteer adventure. We've been trying to visit some of the places that were on our "must do" list and somewhere see a moose in the wild. Alas, Brenda is still "Mooseless in Montana"; so far I've driven approximately 1600 miles on dirt roads looking for the elusive critter....for all that we've spent on gas we could have bought our own moose by now. But hey, it's the journey, not the destination........our hope is that we'll see a moose or two in Glacier and that the curse of Brenda will finally be lifted. But to catch you up on what we've been doing, here's what we've been up to:
Brenda had to make a quick two-week trip back to be with her mom who had a minor heart attack (although it didn't seem minor at the time). She's doing fine after some rest, which at age 88 is remarkable. Brenda's route back to Missoula was interesting; Cleveland to Phoenix to Seattle to Missoula. The the last leg was on a Dash-8 twin turboprop; it only took two hours to fly 360 miles (must have had a tailwind). Our trip of the week was a 350-mile loop which took us through the Big Hole Valley to the ghost town of Bannack, then through the scenic Pioneer Mountains (the picture above), and finally over Skalkaho pass (too scary to photograph) back to Stevensville. Bannack was an interesting place to visit, it was a short-lived town created in the 1880's by a gold strike. Over 50 buildings still remain, and because of the dry climate and stabilization efforts by a group of volunteers, are in remarkable condition. Some buildings, like the hotel and school, remained in use until the 1950's and 50's, although by then there were just a few area residents. Almost all the buildings were open to explore and some of the buildings 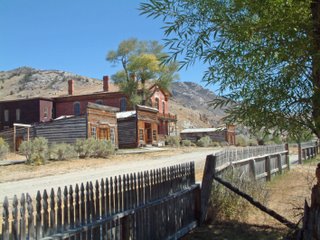 were reputed to be haunted. At one time, Bannack was the territorial capital, although Dillon, which grew larger due to the railroad, took the title until statehood, when Helena became the capital. 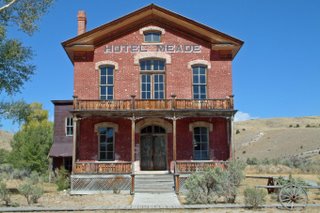 Our trip took us through mountains and 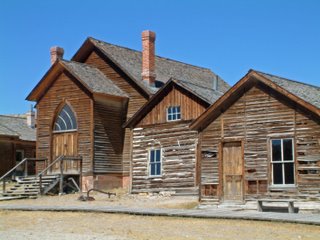 large ranchlands where hundreds of cattle and horses dotted the landscape - what people think of as the "real" Montana. It's also pretty remote; many of the ranches we saw were over 100 miles from the nearest shopping and waaaay farther from a Mall - what a hardship! Our trip back took us over Skalkaho Pass, probably the scariest drive I've ever been on. It's a one-lane dirt road over a 7500' pass without guardrails and sheer dropoffs, some which have to be over 2000'. Not that anything over, say, 200' matters. The real eye-opener is to look back at the road hugging the mountainside and see that the roadbed is eroded underneath and that you were basically driving over a dirt bridge. Yikes.
Our next trip was a bit more conventional; a visit to the US Forest Service Smoke Jumper center at the Missoula Airport. It was an interesting tour of the facilities and explanation of just how crazy these people are. Imagine donning over 100 pounds of parachutes, tools, helmet, ropes, jumpsuit, etc., and then jumping out of a C-47 that saw service during WWII into a remote areas of big, snaggy trees, many of which are on fire. And then, after a 24-hour firefighting shift followed by 16-hour days, gathering up all the stuff you brought and the stuff that was airdropped, putting it into a really big bag, and packing it out on foot to the nearest pickup point. By the way, two weeks in the woods earns you one day off, then you're back on duty. All this for a "seasonal" civil service job at the GS-5/7 level. Bet you can't wait to sign up! Obviously, the folks that do this (many are women) are motivated by some strange desire - thank heaven I never had it.
That's the news for now, time to get busy and sit under the awning & read a good book. Thanks for checking on us!
Posted by DNPC at 9:41 AM No comments: