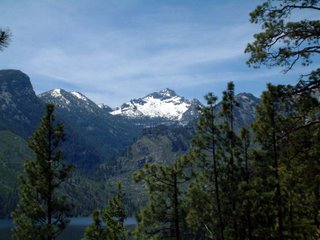 As strange as it may seem for a damn-near perfect couple who live full time in a motorhome, we decided that after two months of the same view through the windshield that it was time to go "camping" at a local lake's campground. Besides, our pad here at the refuge is in the wide open spaces, and we both thought that being under the trees would be nice for a change. So.....off to Lake Como! The lake, located about 30 miles south of us, was created in the early 1900's to supply irrigation water to the valley, and was named for it's resemblance to the lake in Italy. The lake was key to a local land scheme that included digging an irrigation canal through the valley (known today as the "big ditch"), subdividing the land into 5-acre parcels, and then selling the land to folks back east as apple orchards that would "allow a comfortable retirement location and income". Unfortunately, those who took the bait and bought their orchards found that by the time an apple was shipped to a viable market it cost the buyer $12. Although the project failed, the lake and ditch remain today, and the lake is a major attraction for water skiers and fisherman. The campground is beautiful; a paved road leads to the area below the dam (yes, we remember Johnstown), and into an area of tall pines and paved RV sites with electric and water hookups. We arrived early on a Monday to get a prime site right next to a rushing stream. 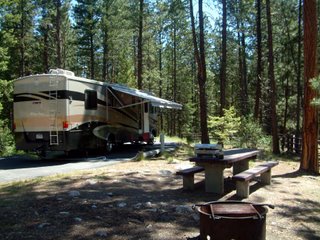 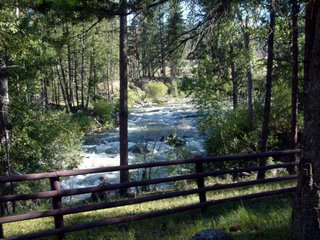 Everything was perfect - the weather was in the mid 70's, the site was beautiful, and we slept at night with the sound of rushing water . We spent three days enjoying the area; a 7-mile trail around the lake was well maintained and gave us some great views (no, we didn't make the full 7 miles). Wildflowers were blooming everywhere and an interesting tree root studded with rocks caught our attention. 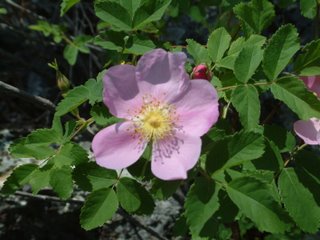 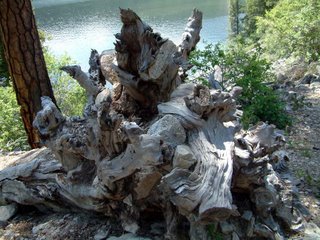 but alas, Brenda is still waiting for her first moose sighting, although we saw Mule deer and Elk. We cooked breakfast outside each morning.......that's late morning, and each night we relaxed around a fire while I watched Brenda prepare her favorite campfire treat, incinerated marshmellows. But eventually we had to pack up and head back to the refuge, well rested and ready for our gruelling 2-day a week work schedule. Thanks for tuning in - keep in touch! 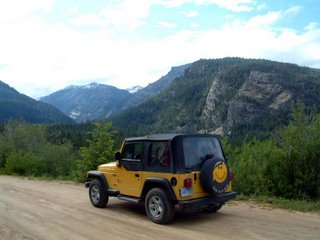 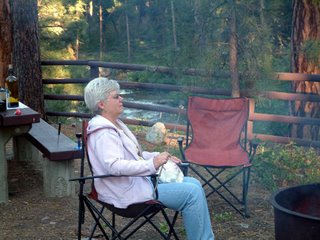 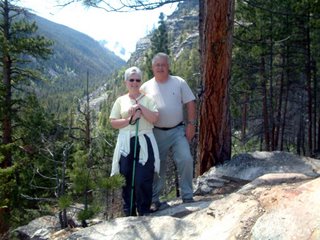 One of the activities we enjoy most since retirement is the ability to go hiking, and this area is a paradise with trails everywhere. There's a creek exiting the Bitterroots every few miles, and a trail for each one. Most are entrance trails for a large network of trails that wind through the 1.3 million acres of the Selway-Bitterroot wilderness. Many, however, are short hikes of a few miles that let us experience the beauty of the area without having to be hospitalized afterward. Like most trails, almost all of the ones in Montana are uphill both out and back, one of those unexplained phenomena that you just have to learn to live with. One such hike, which turned out to have a terrific viewpoint at the end, was the Blodgett Canyon overlook trail, a moderately easy 3-mile round trip (three miles in Montana equals 5 miles everywhere else). Driving up to the trailhead at about 4000', we were treated to a great view after only traveling a short distance. 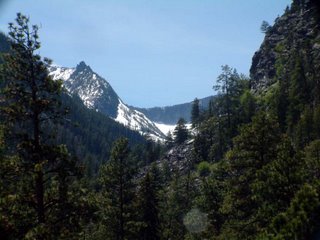 Further up the trail, the mountainside was covered with wildflowers, which now that 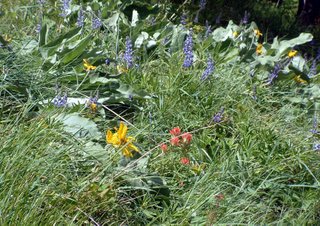 we're into this sort of thing, we immediately identified as arrowleaf balsomroot and silvery lupine. Scary, Huh? The trail meandered through a burn area where we saw downy woodpeckers, and we had the chance to say hello to all the people who had left after us, some with children, who passed us on the trail and were now coming back after spending time enjoying the view. We like to think we're studious, not slow. Finally, we reached the overlook where we had these great views: 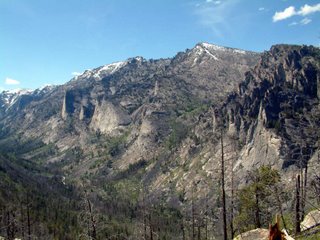 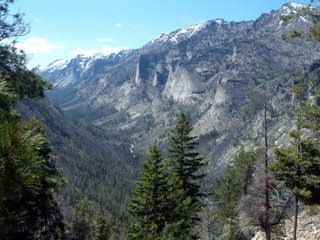 It was a truly impressive place; the roar of the river below us coupled with the wind rushing in the pines and aspen around us was almost deafening. Rested and refreshed, we started back on the return hike, again uphill, with thoughts of Advil, cold beer, and hot showers keeping us going. What a great place! Wish you were all here to see it with us!
Posted by DNPC at 4:49 PM No comments:

Wow! Where has the time gone - seems like I just updated this blog & today I realized that it's been over three weeks. We've been busy exploring the area, working at the visitor center, and helping out by doing projects for the refuge staff. One of the area's big events this year is the celebation of the "Corps of Discovery", the Lewis and Clark expedition. This year marks the 200-year history of the expedition, which passed through the Bitterroot valley on both the westbound and return legs. Although the exact route through the mountains to Idaho is a 2 to 5 day trek on a very rough 1930s Jeep road, today's highway 12 closely parallels the route for over 120 miles without any towns or private homes along the way. While the two-lane highway is in great shape, it's forced to follow the river canyons and as a result there's a bit of an intimidating sign get you in the right frame of mind. 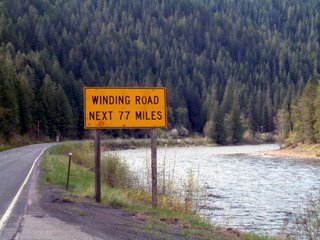 At the Montana/Idaho border is Lolo pass, which at over 5200' still has 3-foot snow drifts. Crossing into Idaho, the road begins a descent that covers 60 miles and follows the Lochsa river to its end at the Clearwater river near Kooskia. 20 miles from Lolo pass, a ranger station and lodge provide the only gas and food along the trip (www.lochsalodge.com). A great place to stop for lunch and give Brenda a chance to shop for trinkets; although a search for moose (Brenda is still looking for her first moose sighting) was limited to the stuffed moosehead on the lodge wall. Back on the road, we stopped to stretch and watch some kayakers and rafters - do those people know how cold that water is? 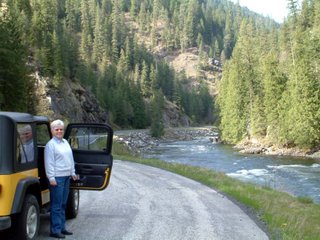 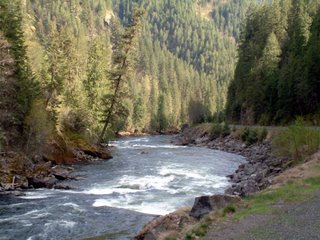 Finally we began to exit the mountains and arrived at Kooskia (pronounced "kooz-kee") which was a bit of a disappointment - a small town, slightly worn, and held together by bars and cigarette smoke. We stopped for an ice cream at the local drug /dry goods/trinket/soda shop and in talking to the nice lady learned that it reaches 110+ in the summer. One of the places we had applied to last year was the national fish hatchery located just outside of town; with the heat, no cell phone service, and almost non-existent services we're glad they never called. After topping off the jeep, we headed back the still-winding road to Stevensville. Just before reaching the town of Lolo at the highway 93 intersection we stopped at Fort Fizzle, a unique historic site. 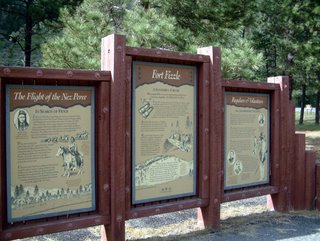 In 1877 800 Nez Perce, led by Chief Looking Glass, left their homes in western Idaho rather than be restricted to a reservation. As they crossed the Bitterroots, the local militia, augmented by volunteers, built fortifications across a narrow portion of the canyon to stop the Nez Perce until the pursuing Army could arrive. The Nez Perce met with the soldiers who told them they could not pass and that they must surrender. The Nez Perce returned to their camp, and early the next morning rode up the ridgeline and around the soldiers and on to the valley without a shop being fired. Hence the name "Fort Fizzle". Until next time, thanks for tuning in!
Posted by DNPC at 6:47 PM No comments: