Good Eats on the Oregon Coast

One of the reasons we enjoy staying on the Oregon coast is the variety of great things to eat!  Yes, we’re foodies, and with the scarcity of good restaurants in this relatively rural area, we’ve been able to focus on alternatives.  This time of year is berry time – the blueberries are ripe, the blackberries not far behind, and soon  the huckleberries and cranberries will be ready for picking.

Here along the Pacific Coast Highway, blueberry farms are common and all offer an opportunity to pick your own berries.  We visited three different farms in our search, where prices varied from $1.50 to $2.50 a pound. 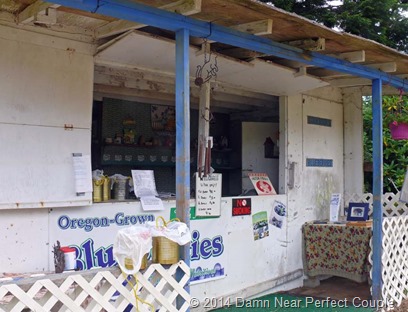 All furnish baskets for picking and bags for packing your berries home, and all have different varieties to choose from.  Some berries are small, others large, some sweet, some tart, but all seem much more flavorful than the ones grown for grocery stores.   Most of the farms rely on people’s honesty; you grab a bucket or two, pick, weigh, and put your money into an unattended cash register.  This method probably wouldn’t work everywhere, but here it seems to do just fine. 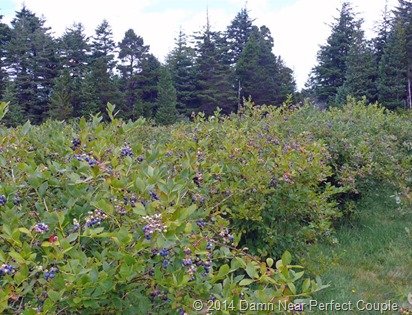 Walking through the blueberry bushes, my path resembles a bouncing ball – pick a f 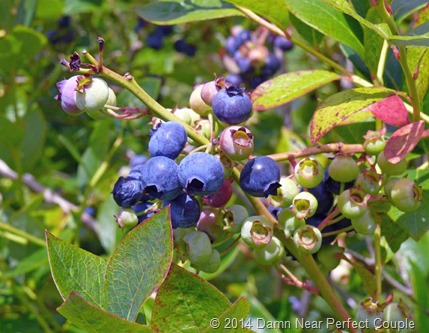 ew from one bush then see a better bush – pick a few – spy a better bush…..it’s probably great exercise as I gleefully dart from one row to another, always looking for that perfect berry.  It doesn’t take long to 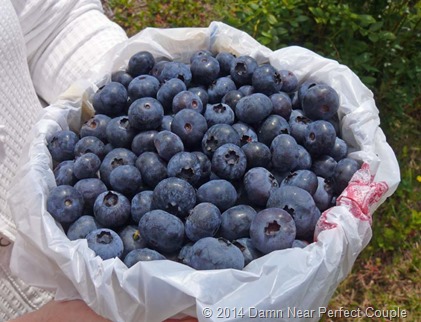 fill a bucket, there’s so many berries that we’ve never spent more than a half hour or so.  Then it’s time to pay up, bag up, and head home to 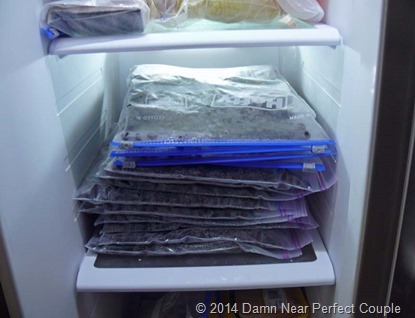 wash and freeze.  Our first time out we picked 12 1/2 pounds, and have been out two more times since.  We’re having berries with morning cereal, afternoon yogurt snack, and evening cobbler.  And we’ve dedicated one entire shelf to frozen berries, and it’s almost full.  We should be set until next spring!

Just like the berries, mussels are easy pickings here.  A short walk down the beach brought me to an area of rocks and tide pools, with more mussels than you can count. 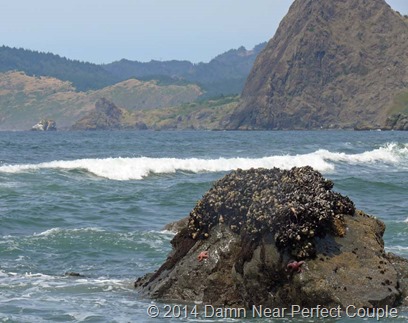 Standing in the rocky area looking up the coast, with the waves crashing and gulls screaming, is always amazing.  The rocks are covered with California mussels, barnacles, and Ochre Sea Stars 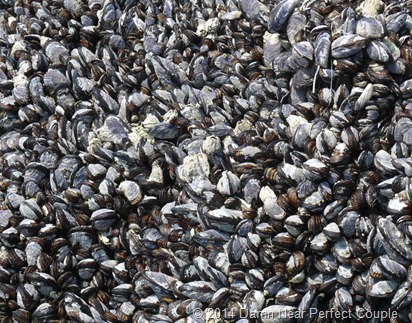 (Starfish), and the tidepools are alive with anemone.  Collecting my 72 mussel limit was easy, although they have to be pried off the rock with a heavy screwdriver as they’re firmly attached by byssus, a strong filament secreted by the mussel.  It was good to see so many Ochre Sea Stars, as they’ve been affected by a “wasting” disease that in some areas have wiped out 90% of the population. 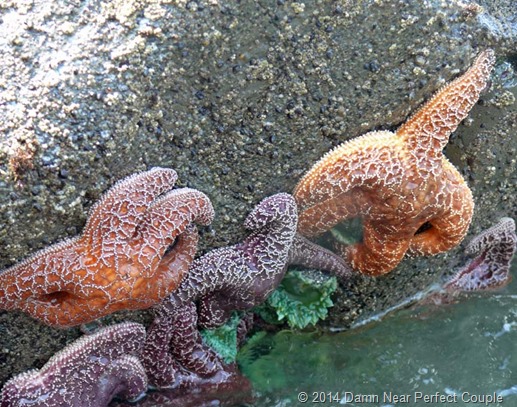 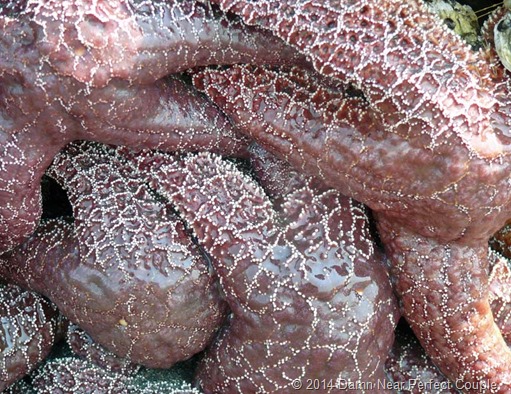 I intended to take pictures of the mussels as I cleaned and steamed them.  But Brenda had promised to make linguini in garlic and wine to go with them, and I lost focus on anything but the thought of dinner…..and they were delicious! 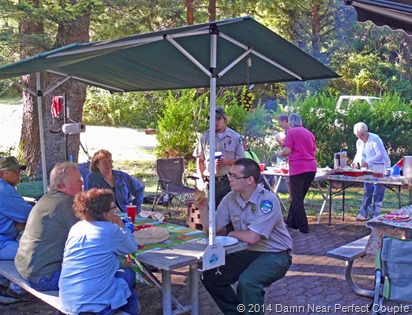 other parks, and we try and have a pot-luck to say goodbye.  We invite the rangers to join us; otherwise they’d be crabby from missing out on all the good food!

Two of the camp hosts, Rob and Syd, had gone exploring on the forest roads and came upon an area of Cobra Lilies, an uncommon carnivorous plant only found in Northern California and Southern Oregon.  We were very interested in seeing one, so with Syd’s help we headed into the forest to an area where they’d been seen.  The Cobra Lilly grows in areas where there is a seep or running water but do not get enough nutrients from the soil.  So to make up for it, they eat bug!  Yes – bug eating plants!  Right in our back yard – who knew?  When you see one you’re reminded of Invasion of the Body Snatchers; they look like little aliens standing in the grass. 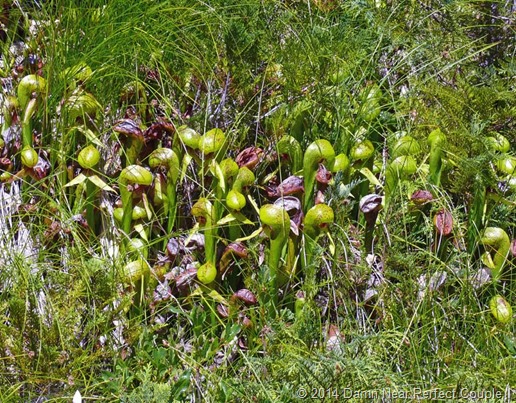 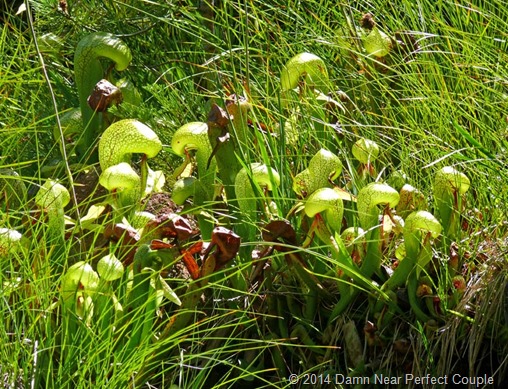 Looking closely, you can see the fang-like appendages that extend below the “hood”.  These are covered with a sweet nectar that attract the prey.  Once the insect climbs into the plant, it becomes confused by the light patterns created by the hood, and eventually follows the nectar trail downward.  Now the insect is trapped as it enters an area of hair-like follicles that point downward and keep the insect from crawling up.  Eventually the insect ends up in the bottom, where a  cauldron of insect-dissolving goo absorbs the “nutrients”.  Sounds like a cheap Syfy movie, doesn’t it?

They are so “otherworldly”….especially when the light hits them just right: 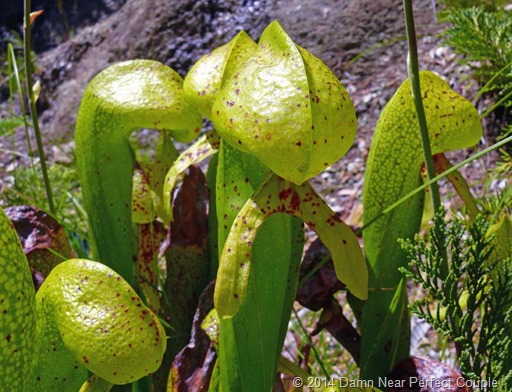 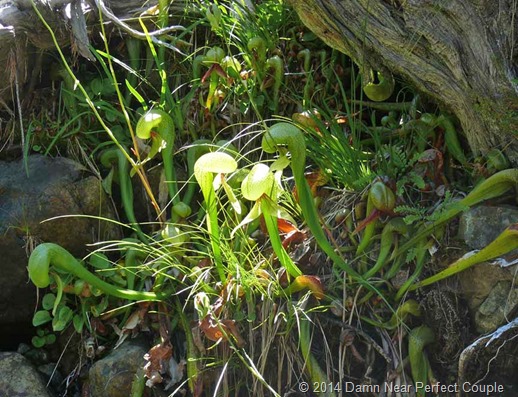 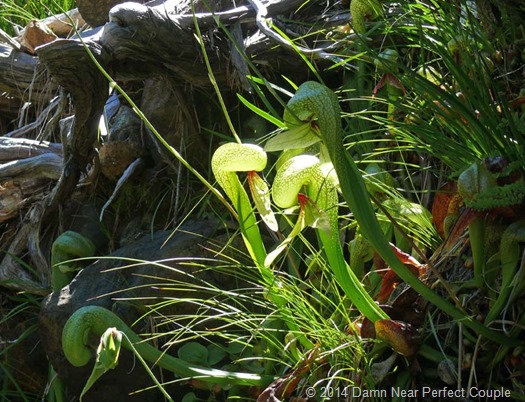 On a lighter, more happy note…..each day we walk to the office to pick up our golf cart we’d pass this Tree Swallow nest.  The chick would hear us coming and stick his head out begging for food.  It’s gone now, let’s hope it doesn’t get stuck in a Cobra Lilly! 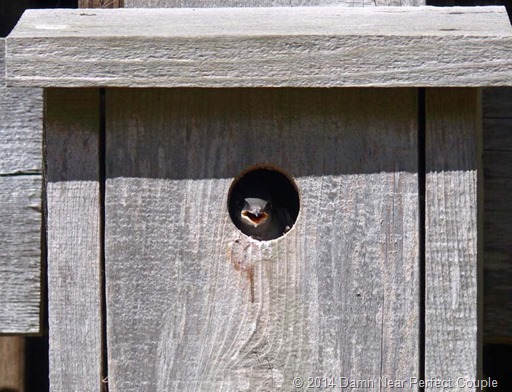 Thanks for stopping in, see you soon!