We've been enjoying the relatively warm weather here in central Texas. Unlike our winters in southern Arizona where the days were warm but the nights cold, here we've only had a few nights below freezing. It's been springlike the last few days, highs in the 70s with nights in the 50s, although the skies have been overcast most of the time. We're starting to see more birds as the days warm; today we saw the first House Finch of the spring, a nice change to the daily crowd of House Sparrows that congregate around our feeders. This Western Bluebird (in Rufus variation, we think) is also a visitor.
We haven't done much exploring this last month; Brenda had to make a two-week trip back to Ohio to visit her mother (fell, broke hip, is doing fine, thanks), so the cat and I had another opportunity to bond. The cat, who normally avoids me as if I carry some type of deadly feline leprosy, suddenly attached herself to me like a piece of Velcro once she figured out I was her food source. All of this affection stopped, of course, the minute Brenda returned. Since I had the time, I decided to complete the Spring Waxing of the Motorhome ritual, a painful, two day exercise. At nearly 38 feet long and waaay tall, it's like waxing 20 cars....and just as boring. Thanks to good weather and Stoner's SpeedBead (great stuff - spray on, wipe off), the coach looks great and the wax has reduced the drag coefficient to where I'll probably get 7.5001 miles per gallon instead of the 7.5. Hey, it all adds up. 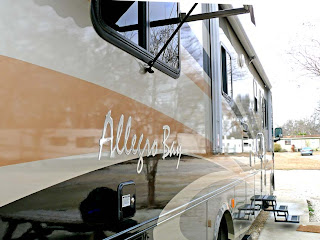 We've enjoyed visiting Palmetto State Park, an interesting park that has well maintained trails along the San Marco river and through a large palmetto grove. It's just up the road from Gonzales, a tired little town but with an interesting history of involvement with the Texas Revolution. In 1831, the Mexican government gave the citizens a cannon to help protect them from Indian attacks. By 1835, with the revolution heating up, the Mexican government decided maybe it would be a good idea to get it back, sending 150 soldiers to the town. According to local historians, they were met by a small group of residents on the banks of the Guadalupe river brandishing a flag that said "Come and Take It". The Mexican soldiers couldn't cross the river since the Texans had hidden the ferry, and they camped on the banks where the next morning, they were attacked by the Texans. After one round from the canon killed a one of their member, the soldiers retreated back to San Antonio. Because of this event Gonzales bills itself as the "Lexington of Texas" since the first shots were fired here of what would become the Texas Revolution.
We also visited Balcones Canyonlands National Wildlife Refuge to explore volunteer opportunities for next winter. As we pulled into the visitor center parking lot, we noticed a couple getting out of a pickup truck displaying and Escapee's sticker. Since we're also members, we introduced ourselves and found that they too were interested in volunteer information; and that amazingly, they had volunteered at Lee Metcalf NWR last year, leaving just before we visited. We had a great time with Ed and Marrianne reminiscing about our great time there and, being retired Air Force also, found that we had much in common. Later, we had the chance to meet with the Outdoor Planner for the Refuge and talk about next year, but found that this refuge has very little visitor activity during the winter, and while they had openings, the duties would be primarily maintenance. We decided that due to the all-maintenance aspect and remote location of the refuge, we'd take a pass on this location. We still have plans to visit Aransas NWR on the coast north of Corpus Christi, we'll tell you how that went in a future blog.
Now that Brenda's back and the weather's getting even warmer, we'll be out exploring and checking out the menu's of local restaurants - come back and see where we've been!
Posted by DNPC at 2:32 PM No comments: