From Montana to Iowa

We’ve been having a great time since our last post, and have covered a lot of territory.  On June 8th, our daughter Kim and her husband Bill and dad Paul arrived in the Bitterroot Valley for a stay at an amazing vacation rental,  and then Brenda’s brother Ron and his twin sons Jim and Chris arrived for a five-day stay. 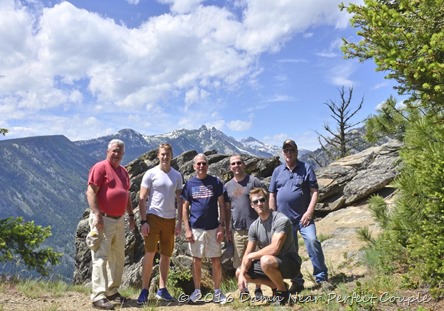 We had a great time showing them the sights, fishing at the “cabin’s” pond and stream,  and getting reacquainted. A trip we always make was to Lost Horse Overlook, where at 6000’ you can see for miles into the Bitterroot Wilderness and Idaho.  It was a beautiful clear day,  the views were breathtaking, and memories were made.  Unfortunately, as this is being written, a lightning-caused wildfire has burned much of the area, and we’re heartbroken that this magical place may never be the same. 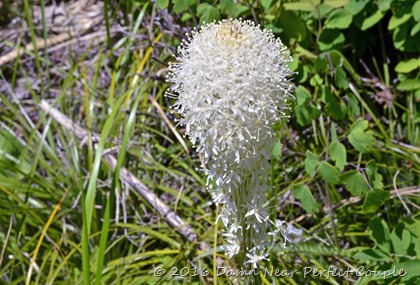 Near the overlook, we began to see blooming Bear Grass, one of our favorite flowers.  From a distance, it looks like a one flower, but close up you can see the individual flowers that form the top (click on the image to enlarge).  They don’t last long so seeing them in full bloom is always a treat!  We visited our old volunteer location at Lee Metcalf National Wildlife Refuge to see our friends Bob and Kim, attended a great birthday party for our dear friend Heidi and her husband Jim, and had a final dinner with everyone including our old friend and mentor from the refuge Deb and her husband Bill.  What a great time we had!  But alas, they all had to get back to their working lives while Brenda and I decided to spend some time on Flathead Lake and once again visit Glacier National Park. 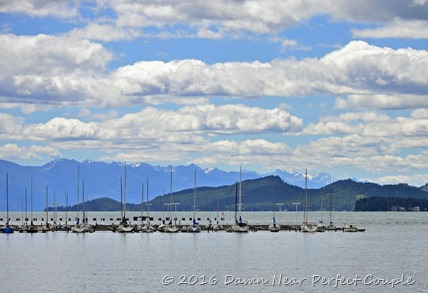 We stayed at a great park, Edgewater RV Resort and Motel, right on the shore of the lake.  Flathead Lake, name for the Indian tribe, is the largest natural lake west of the Mississippi at 30 miles long and 16 miles wide.  It’s a beautiful lake with snow-covered mountains surrounding the Flathead Valley.  The lake, and the largest town, Kalispell are very popular and the lake shore is crowded with vacation homes, marinas, and parks.  But the big attraction is just up the road at Glacier National Park.

We visited the park on the opening day of the Going to the Sun Road, and even though the weather was cool and overcast, the park was very crowded.  What makes Glacier difficult to visit during the season is that there is only one road through the park, and it was almost bumper to bumper the day of our visit. We turned around once we were close to the climb to Logan Pass, knowing that the trip up and back would take hours.  But we enjoyed our visit and are always enthralled by the chiseled mountains, even if the peaks were cloud-covered. 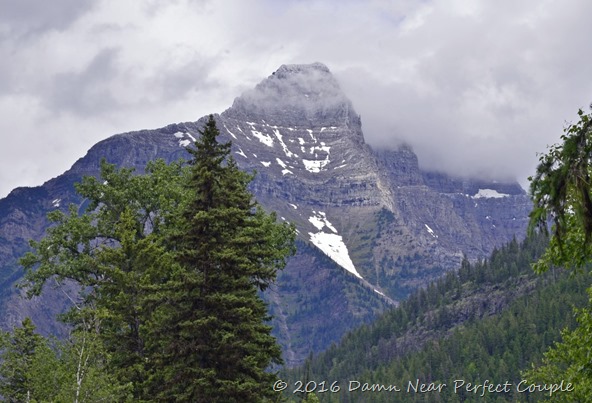 A few days later the weather cleared and we decided to make a pilgrimage to a little place far into the woods, and the home of the best Huckleberry Bear Claws ever known to man.  Or woman.  Take the gravel road along the North Fork of the Flathead River for 30 or so miles along the western border of Glacier into an area with no electricity or utilities of any kind…..and there you’ll find the Polebridge Mercantile. 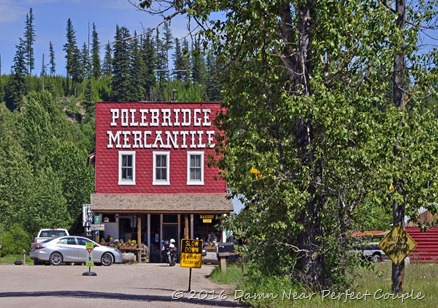 The “Merc” has been in operation since 1914, and became famous as a bakery in 1994.  We stumbled upon it while looking for moose on a road trip in 2006, our first year in Montana.  How they manage to create such incredible baked goods without electricity or plumbing is beyond us, but somehow it works.  On this visit, I struck up a conversation with the clerk, who said he was there for the summer from Florida, and the other clerk was from California.  When I remarked that it was unusual to have people come so far, he said, “oh yeah, but the girls who do most of the baking are from the Czech Republic”.  That triggered the inner Bohemian in me, so I walked back to the kitchen and said “Jak se máš?” (How are you?), which started a lot of surprised laughing from the college-aged Czech ladies.  They were a joy to talk to but couldn’t explain just how they ended up out here in the woods only 20 miles from Canada.  Or why they’re not making any Kolache!  So instead of Kolache we loaded up on Bear Claws and Cinnamon Buns.  Here’s a picture of a coveted Huckleberry Bear Claw shortly before it disappeared: 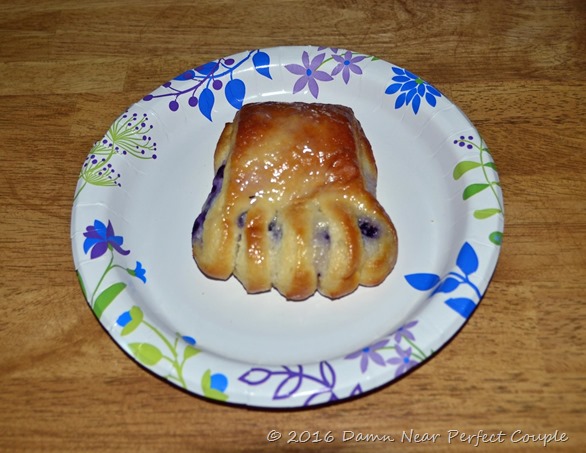 The trip to Polebridge is worth not only for the bakery, but for the views.  From the tree-covered picnic area outside the store, you can see the mountains in Waterton Lakes National Park across the border. 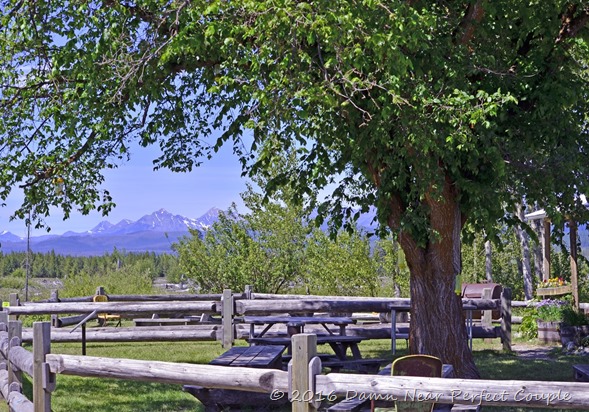 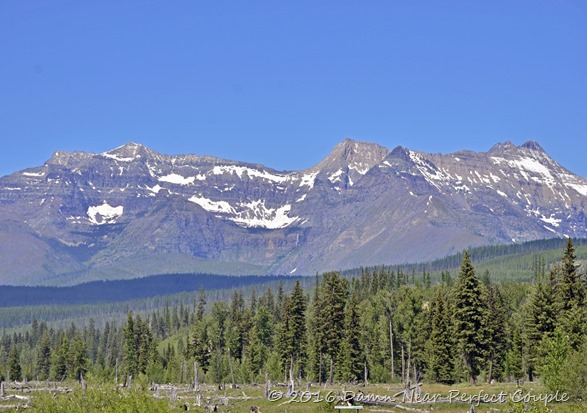 All too soon it was time to leave Montana and head east to Ohio to visit friends and relatives.  We decided that this year we’d skip volunteering and take advantage of low diesel prices to travel to Ohio and then wander somewhat aimlessly around for the rest of the summer.  So off we went – do you know that Montana is a huge state?  Three days later we spent a couple of nights in Mobridge, SD, a small town on the Missouri River.  We took a day to look around and found the burial site of Sitting Bull, the famous Lakota Holy Man and Chief who is credited with leading the massacre of Custer and his troops – and later became a performer in Buffalo Bill’s Wild West Show. 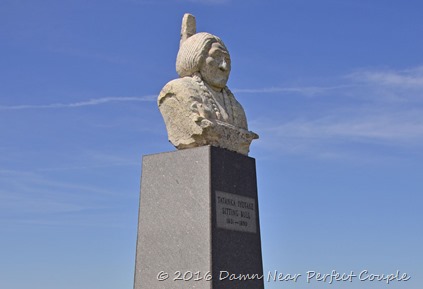 The story of his life is interesting and tragic, and so we were disappointed at the condition of the monument; unkempt grounds, deteriorating roads, and trash didn’t seem to be a fitting site, especially since it was on an Indian Reservation.  The story of the monument and reason for neglect can he seen here.

We’ve continued traveling with just overnight stops until arriving in the Cedar Rapids, Iowa area.  We needed a place to get off of the road for the 4th of July weekend and we enjoyed the area on a past visit.  So we checked into the large but very well run Lazy Acres RV Park for a few days. 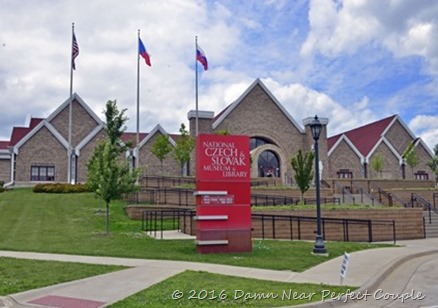 The last time we visited, the National Czech/Slovak Museum was closed for repairs after a major flood.  Being of Czech descent, I’m always interested in learning more about the country of my grandparents.  The museum is an impressive building with exhibits, theater, meeting rooms, and library (and store, of course).  Surprisingly, one of the major exhibits displayed the works of Andy Warhol, who was Slovenian and was born Andy Warhola.  Other exhibits featured Bohemian glass, traditional clothing, and living under Communism. 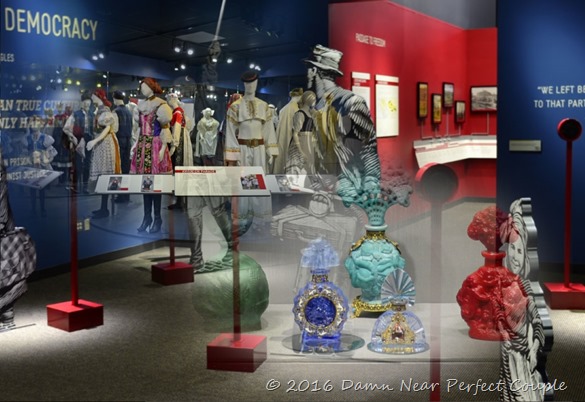 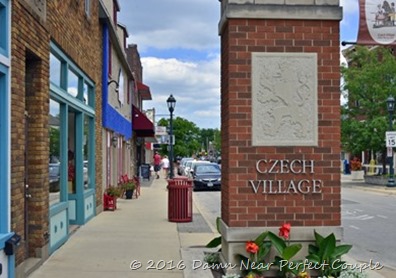 Just across the street from the museum is Czech Village, a collection of shops selling antiques, gifts, and baked goods.  The area was completely flooded in 2008 and hasn’t fully recovered, with empty storefronts and closed restaurants.  We did find a bakery, and while they didn’t have my favorite (poppy seed Kolache), they did have a substitute – a “Bohemian Hamburger”!  (poppy seed “burger” on a sweet bun): 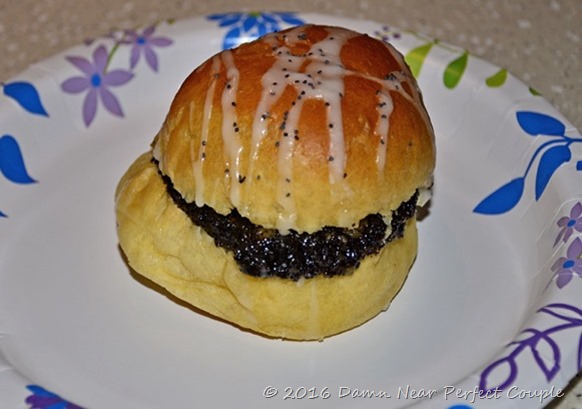 Like the Huckleberry Bear Claw, the “burger” didn’t last long…..

That’s it for now, we’re getting ready to hit the road again!  Check back and see where we are!