Like many of you, we've been "sheltering in place" here in Bandon, Oregon.  It hasn't been much of a hardship, as we're in a nice RV park, and have a small town for essentials and an amazing beach to walk.  We've had very few cases of COVID-19 here; none within 25 miles and only a few dozen (thanks to a correctional facility) in our largest city (Coos Bay) to the North.  Face masks, disinfectant wipes, and gloves have become a natural part of our wardrobe.  But the time has come to head to Northern Idaho and Farragut State Park for our third year as program hosts.  It will be a challenge to conduct programs using "social distancing", but we're willing to give it a try.  Just to be safe, we're taking a route on U.S highways instead of interstates and traveling through lightly populated areas until reaching Coeur d'alene.

We'll miss the coast and the many things it has to offer.  Some of the memories of our summers here are worth reposting since the pictures were taken a few years ago.  As always, stuff that's good to eat comes first to mind, and we'll miss the pick-your-own blueberries and abundant blackberries.  Blackberry bushes are everywhere, and these are the "Himalayan" blackberries that grow large and sweet.  There are also thimbleberries, wild strawberries, and my favorite, huckleberries in the fall.

And ahhh....the crab!  When we lived on Chesapeake Bay, I was a big fan of Blue Crab.  But then I discovered Dungeness Crab and I realized the error of my ways.  Fat, sweet, and plentiful in the local waters, it only takes a few to make a meal.  From catching them in a trap to serving them on the table is a labor of love:

The park we stay in is less than a mile from the ocean and we've enjoyed walking the beach and exploring the tide pools during low tide.  Tide pools are a fascinating and colorful world of strange life - from the ever-changing Giant Sea Anemone to the bright Purple Sea Urchin and strange Gumboot Chiton, every tide brings a different pallet of colors:

Bandon is the home of Face Rock, an unusual offshore rock or "sea stack" that eerily resembles a face looking up at the sky.  The legend of Face Rock tells of a young Indian princess named Ewauna from and inland tribe, who while visiting the coast was told not to swim the in the ocean lest the evil spirit Seatka capture her.  One night, while the tribes feasted and drank, Ewauna decided to visit the ocean and swam far out from the shore.  Seatka, laying in waiting, seized her and demanded that she look at his face, for his power lay in his eyes.  She defiantly refused, saying that she never would, keeping her face to the friendly moon.  The next morning the tribe realized she was missing and searched everywhere for her, and when the morning mist cleared they saw the beautiful face of Ewana smiling up at the white clouds.  Where she remains today. 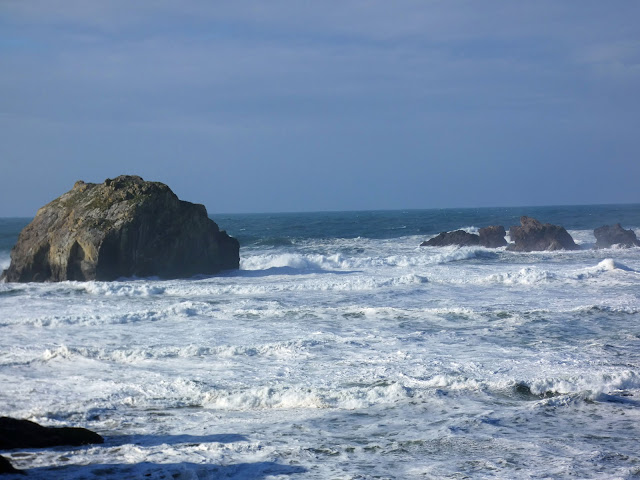 I was intrigued and amused by the legend....and then one day after taking some pictures of a winter storm I noticed something strange in the waves.  Images of the princess?  Or the evil spirit?  Spooky! 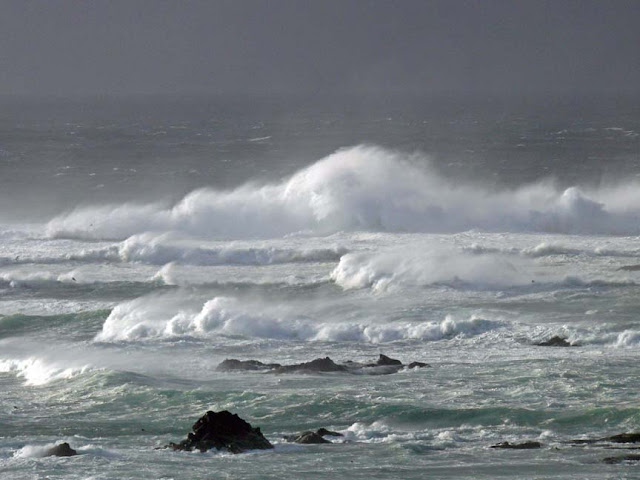 And speaking of spooky.....Brenda and I have been binge-watching really bad horror movies on Amazon.  One of our favorites (right up there with "The Crawling Eye") is "From Hell it Came", the riveting story of a native prince who was wrongly murdered by a rival and returned to life as a......tree!  A horrible, murderous, bloodthirsty tree!  Named Tabonga! 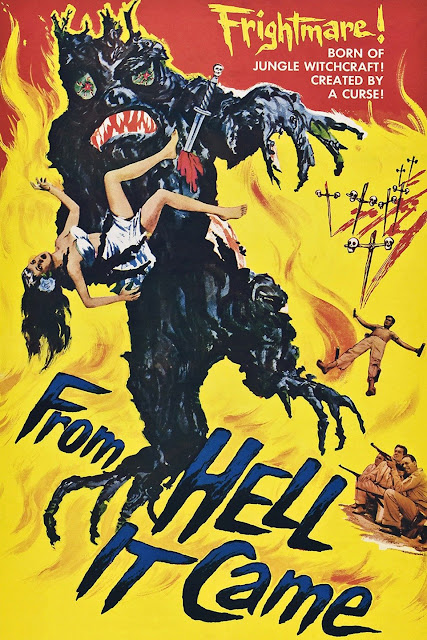 And then one recent day, while driving up a lonely mountain road, we came around a corner and there.....stood....Tabonga!

In the interest of public safety, we will not reveal the location of Tabonga.  Unless a bribe is offered.

That's it for now.  We'll be traveling soon through some new places so we're hoping to see some interesting sights.  Until then, we'll say goodbye to the coast for now. 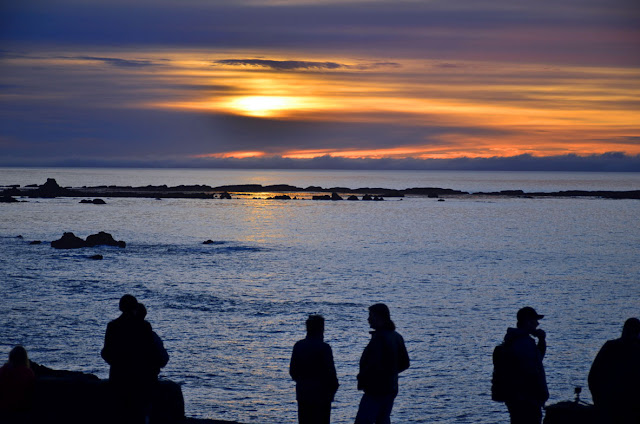